From The Portalist we have this appearing article (click on screenshots):

Any cat lover knows that having a cat is like owning your own little alien. They defy gravity with leaps that scale kitchen counters in a single bound. Their eyes almost glow in the dark, flickering in your peripheral vision as you wake up to for a midnight drink of water. They go boneless in your arms as if they can control their own state of matter.

Cat lovers also know that the best reading environment always includes a kitty snuggled up on your lap. If you’re looking for a good story to read when curling up with your feline friend, we’re letting the cat out of the bag—these books about cats in space are purrfect for any cat-loving science fiction fan.

JAC: I’m not a science-fiction fan, but these books sound most suitable for young readers.

Here are the five books (click on the image to buy), and a few words about each (indented words are from the site; flush left are my own)

Life on Earth is bleak. The only animals seen anymore are in zoos. Travel to the wilderness requires dealing with bureaucratic red tape. Riots abound in overcrowded cities. To make matters worse, an alien spacecraft has recently entered the solar system, and nobody knows what it wants.

12-year-old Barbary has always dreamed of going to space. Shuffled between foster families since the death of her mother, she finally has the chance to escape orbit, as her latest foster father lives on the Einstein, an outer space research station. However, pets are expressly forbidden on the space station, and Barbary can’t bear to leave behind her cat Mickey.

With the help of some unlikely allies, Barbary finds a way to smuggle her cat aboard, but how long she’s able to keep her cat a secret on the small space station is anyone’s guess. Mickey is a curious cat, and his mischievous antics put him at increasing risk of getting discovered—and Barbary returned to Earth. Meanwhile, the alien spaceship drifts closer every day… 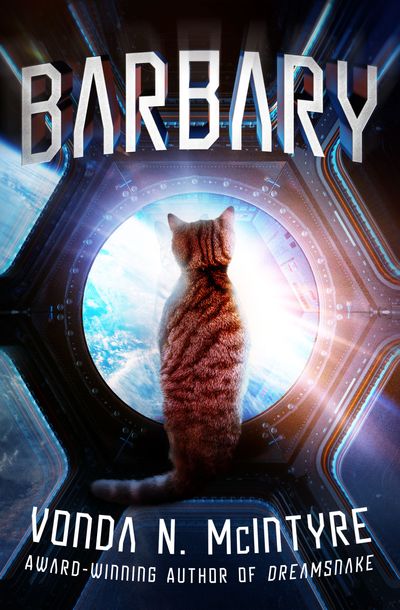 Far, far away from Earth exists the planet Korwar, and on this planet exists a young orphaned boy, Troy Horan. His home planet conquered and his parents murdered, Troy scrapes a living together at an exotic pet store catering to the upperclass.

Something about the job unlocks mysterious telepathic powers in the boy. As soon as Troy begins work, he receives warnings from cats, foxes, even a rare kinkajou about the danger he’s stumbled into. When Troy’s boss is killed, Troy is framed for his murder, and he must escape with all five Earth animals to the Wild, where he encounters alien ruins and a vast conspiracy.

Troy becomes enmeshed in a perilous adventure, one that will leave many dead and an entire government in jeopardy. With breakneck pacing and a plot full of wild twists and turns, this vintage read will be sure to intrigue. 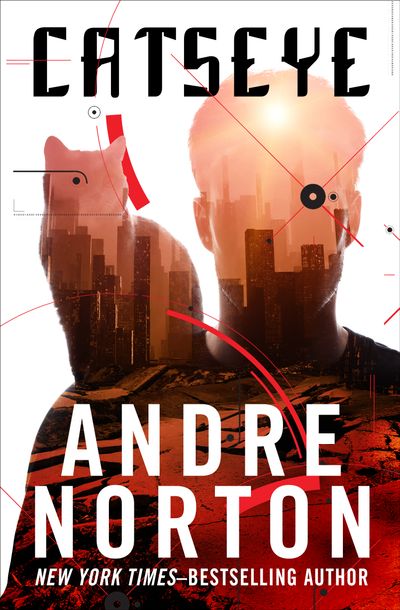 This new shipment unsettles Captain Lutobo, but as these cats are worshipped as on their home planet, he must ensure their safe transport along with the vulnerable humans aboard.

When a passenger is found dead with a clump of blue fur in their hand, Captain Lutobo is ready to call the cat’s shipment off. It’s only when one of the cats is found dead too that Captain Lutobo realizes something more sinister is going on, and he must discover the cause if any of them are going to survive the journey. 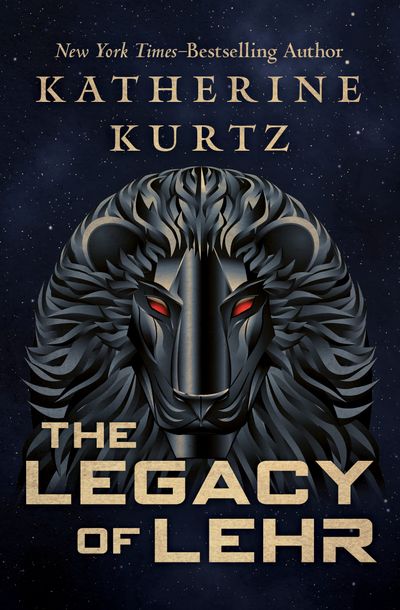 Felicette was rescued from the streets of Paris to undergo training, testing, and spaceflight with the French Space Program. One of 14 cats tested, Felicette was the only cat who could successfully transmit results back to Mission Control.

With electrodes implanted into her brain, Felicette showed French astronauts how mammals would react to high g-forces and weightlessness. After becoming the first and only cat successfully launched into space, Felicette then safely parachuted back to Earth.

This picture book, with adorable illustrations, details Felicette’s real-life journey to assist humans on their interstellar adventures. It is an artfully told true story about how even the smallest creatures can achieve great things—and how sometimes science fiction and reality are closer than we think.

As I’ve written several times, Félicette was a real cat, and the story above is true in the main, but I bet it leaves out the fact the she was euthanized two months after the flight so they could examine her brain. What kind of cruel people would do that? 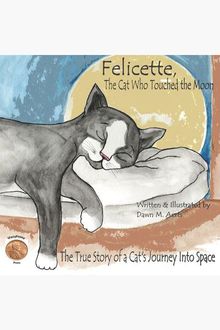 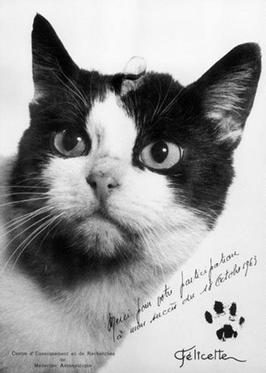 In this novelization of the classic film Alien, Warrant Officer Ripley has been in hypersleep with her orange cat, Jones, and other crew of spaceship Nostromo. The ship’s computer awakens them all to investigate a distress signal rising from a nearby moon. It’s only when crash-landing on the moon that Ripley discovers the distress signal is actually a warning of something menacing lurking the rocky landscape.

On the surface of the moon, Ripley’s crewmate Kane discovers a cache of alien eggs. One of the eggs attaches itself to Kane’s face, and the team drags him back to the ship against quarantine regulations. When the egg detaches on its own, they think everything is safe, until a baby alien bursts free from Kane’s stomach and runs rampant through the ship.

The alien ambushes and kills the crewmates one by one, leaving Ripley and Jones to fend for themselves as they attempt to repair the spaceship and flee to safety. Throughout, Jones alternatively leads the crew astray and warns them of incoming danger. 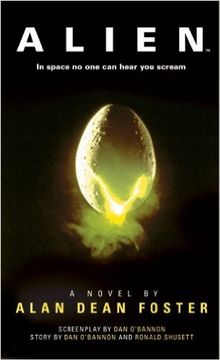 If you want your cats to become ailurophiles, these are the books to get, but do not get the one on Félicette without checking out how the author deals with the cat’s death.

This is a heartwarming story, and an improbable one. Click on the screenshot to see the BBC article: 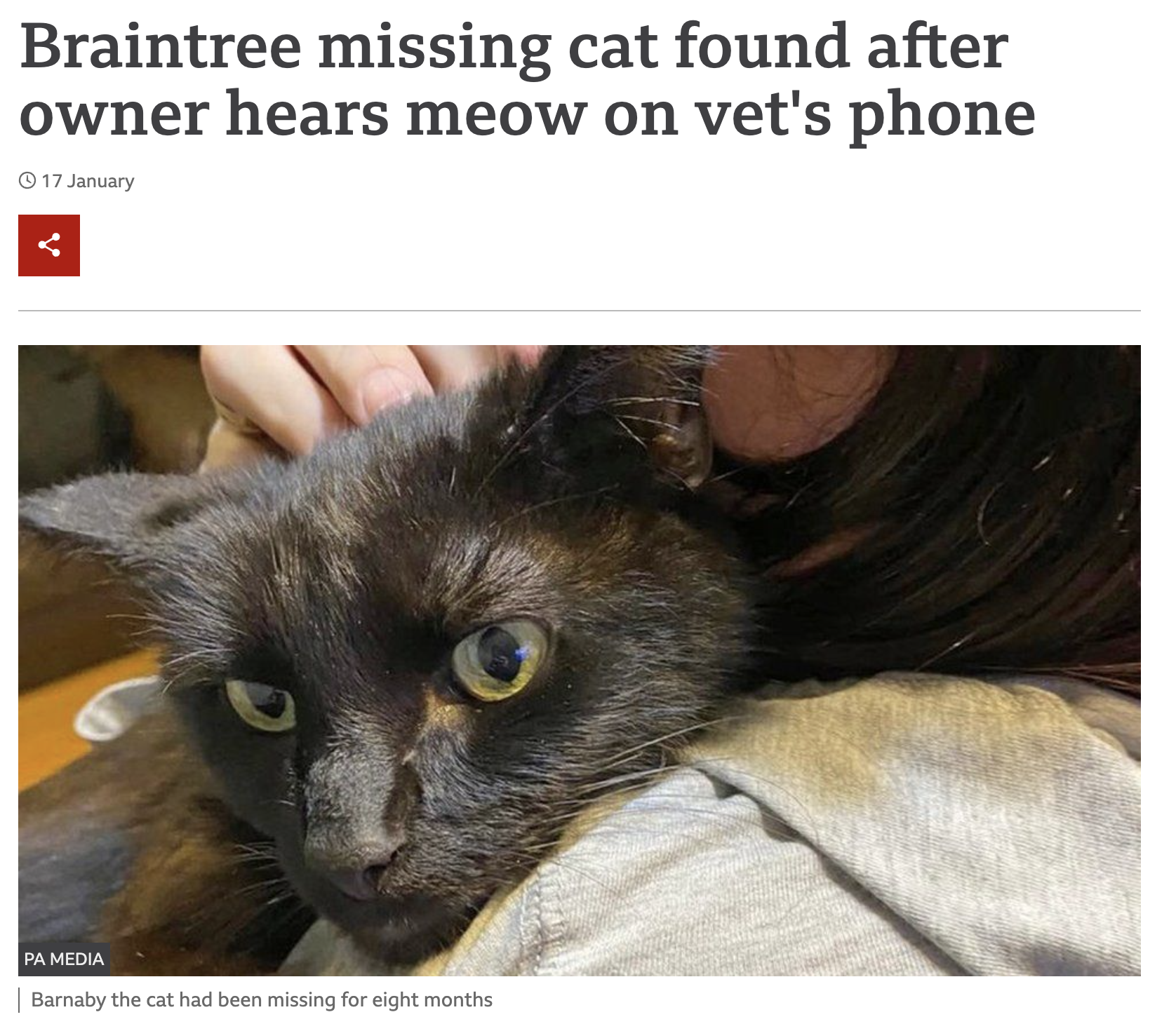 A cat missing for eight months has been reunited with its owner after she recognised his familiar meow on the other end of the telephone while on a call to her vet.

Rachael Lawrence, from Braintree, Essex, was talking to the vet about her other cat when she heard Barnaby’s distinctive cry in the background.

She was told it was a stray but phoned back later and asked for details of the cat as “it was bugging me”, she said.

Barnaby is now back with his family.

Ms Lawrence said she was so sure she could recognise her cat’s meow that she called the vet again asking if the “stray” she had heard over the phone was black, with a white patch on one of his back feet.

When the surgery confirmed the description she took in photographs of Barnaby to show to staff.

She said she “knew it was him” as soon as he was brought into the room.

Her three children had nicknamed Barnaby “Fatman”, but when he was brought in he had “loads of scabs” and was “all skinny and missing fur”, Ms Lawrence said.

However, the family’s wayward pet was “more than happy to be picked up and cuddled”.

She added: “We just need to fatten him up to get him back to Fatman.”

Ms Lawrence said she had paid to have Barnaby chipped before he went missing but questioned whether the procedure had been “done properly”.

All’s well that ends well, but Barnaby must have had a rough time of it for eight months! And they’d better check his chip!

Foxes are Honorary Cats®, and so I’m featuring a wonderful collection of fox photos from My Modern Met. Click on the screenshot to see them all; I’ll put up just six portraits. 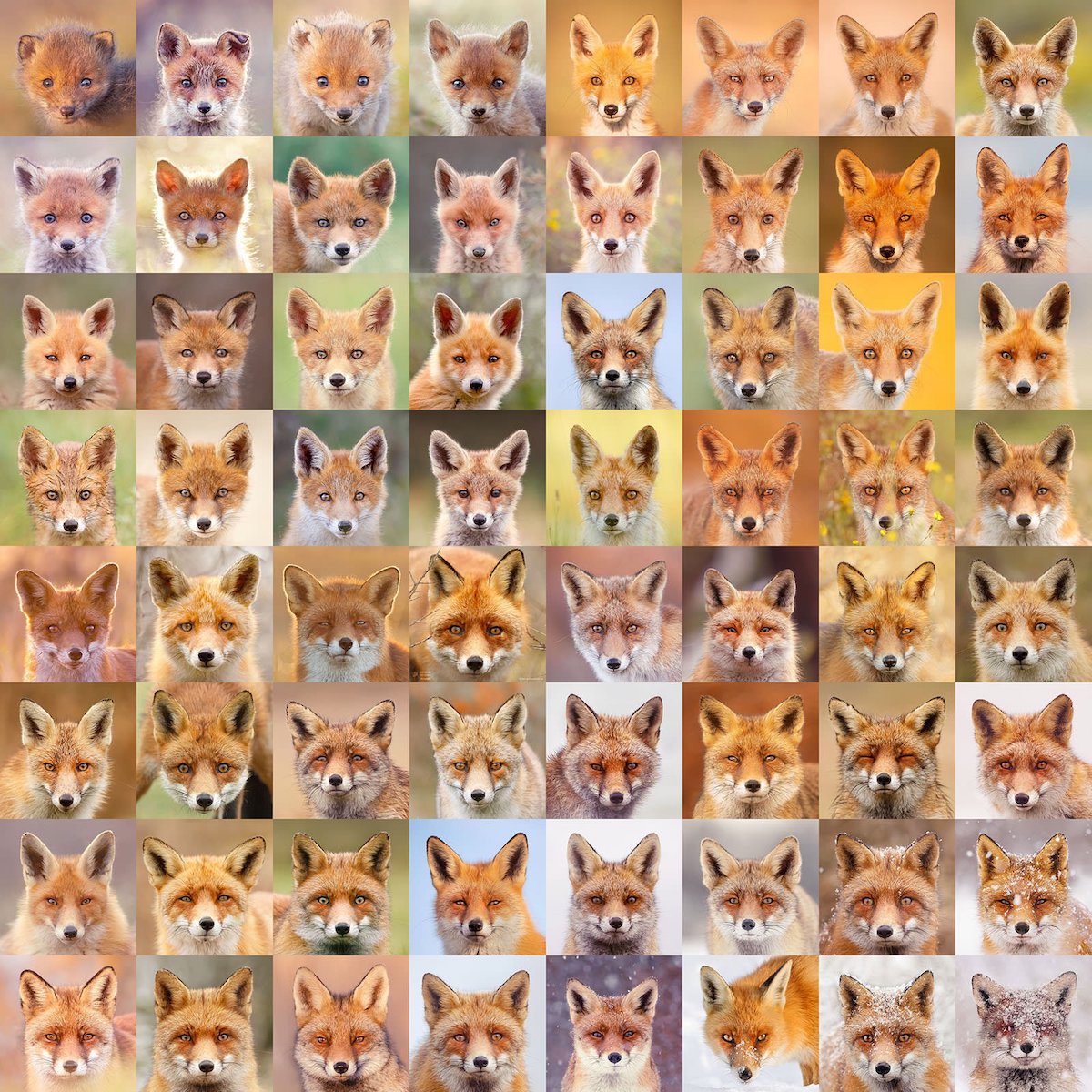 Many photographers have a muse, or a subject that inspires their passion for image-making. For Roeselien Raimond, it’s foxes. It’s been over a decade since she first began photographing the wild creatures, and during that time, she’s snapped 64 fox faces. To demonstrate the breadth of her portraiture, she’s arranged them all in a dazzling eight-by-eight photo mosaic. Some of the portraits show foxes giving a steely-eyed stare while there are others who have clearly found their moment of zen. Together, the many images represent the nuances found among the fascinating creatures.

Raimond’s passion for foxes has inspired her to contemplate the idiosyncrasies of each portrait. In looking at her impressive collection of images, there are personality archetypes that the foxes fall into. The photographer even identified 12 “types” of foxes and wrote about their character traits in 2016. Since then, she’s expanded on that and has lovingly begun to sort them into even more groups. One is The Flatheads, which don’t have anything flat about them at all; they have very round features. The other group is The Longnoses, which have “exceptionally long noses” along with elongated pointy ears. 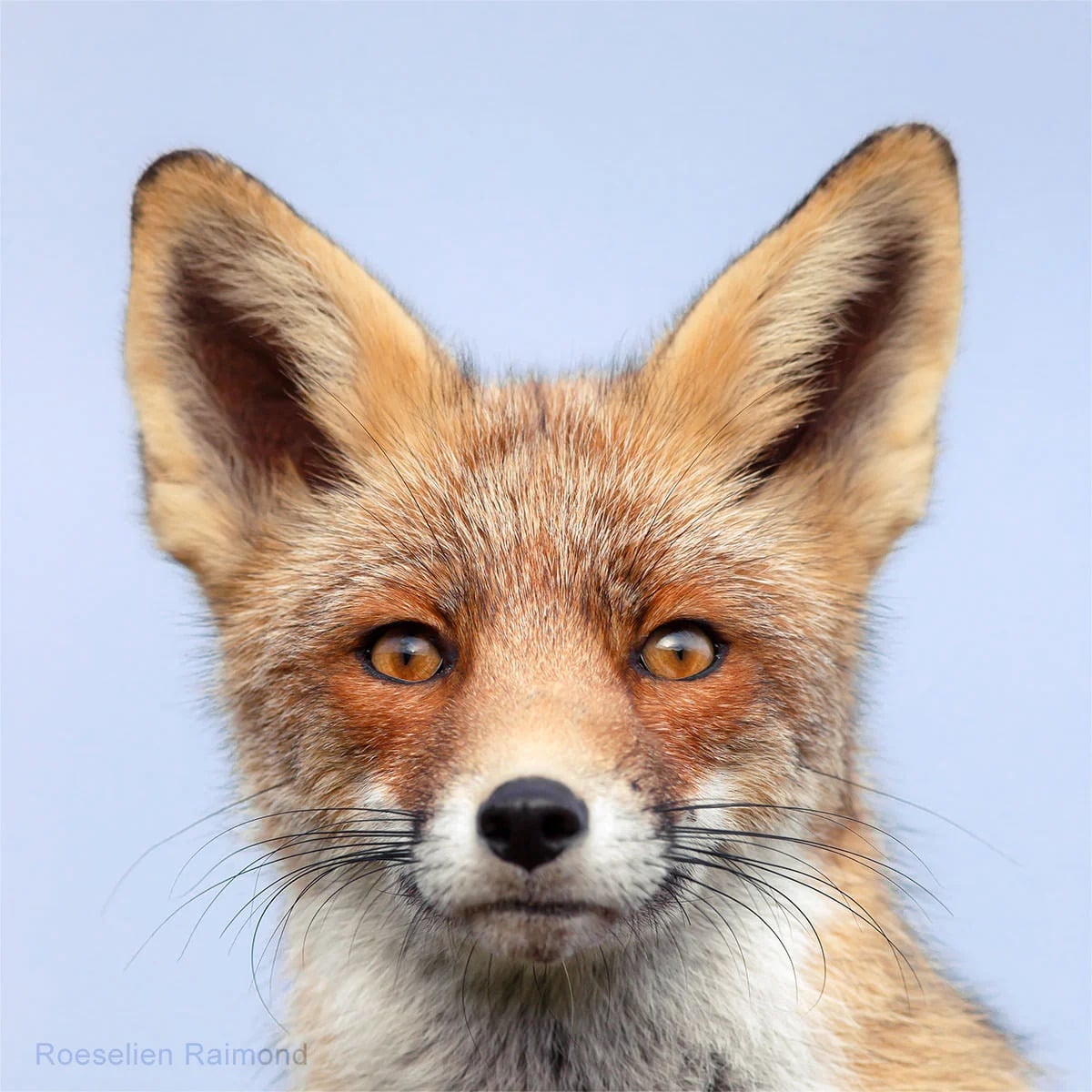 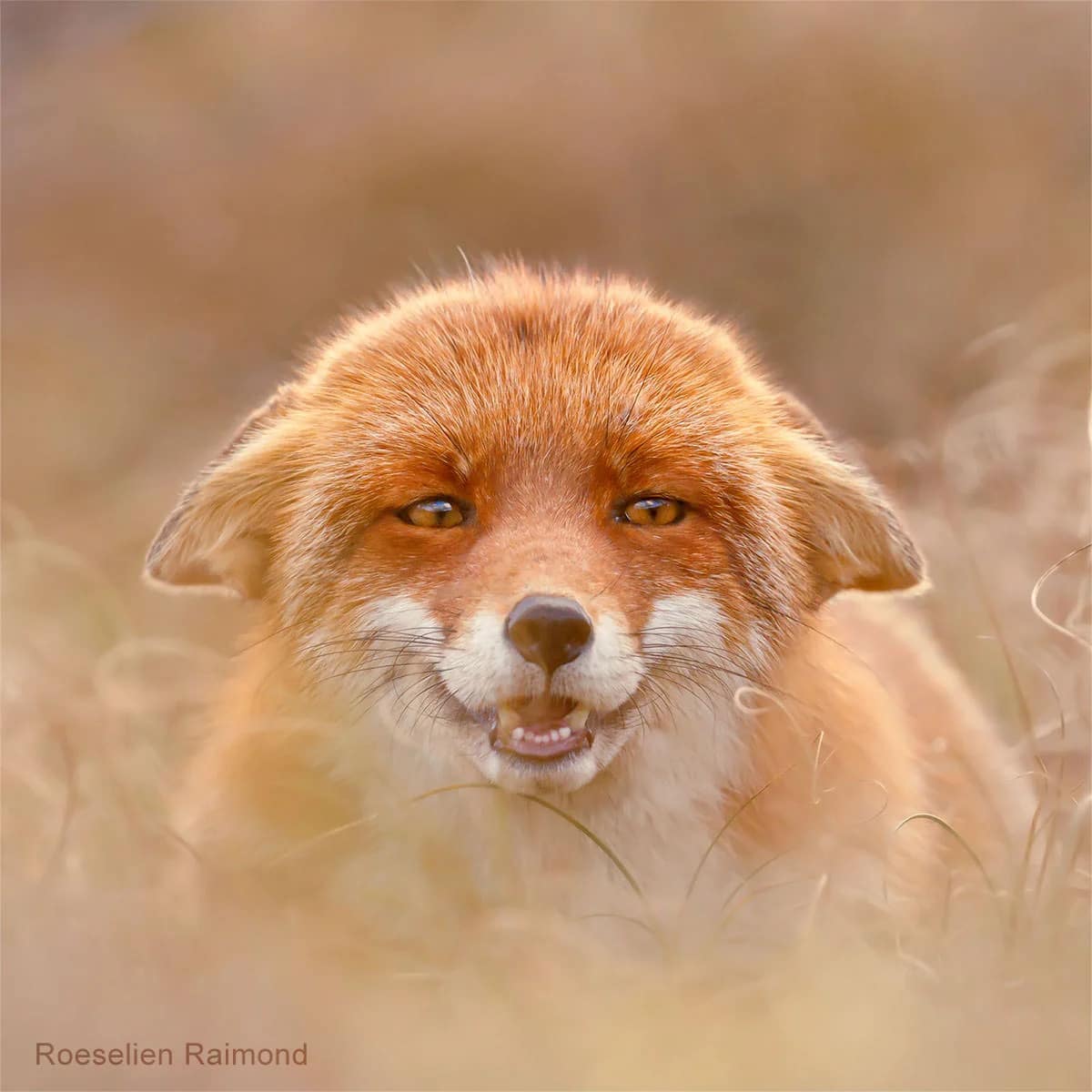 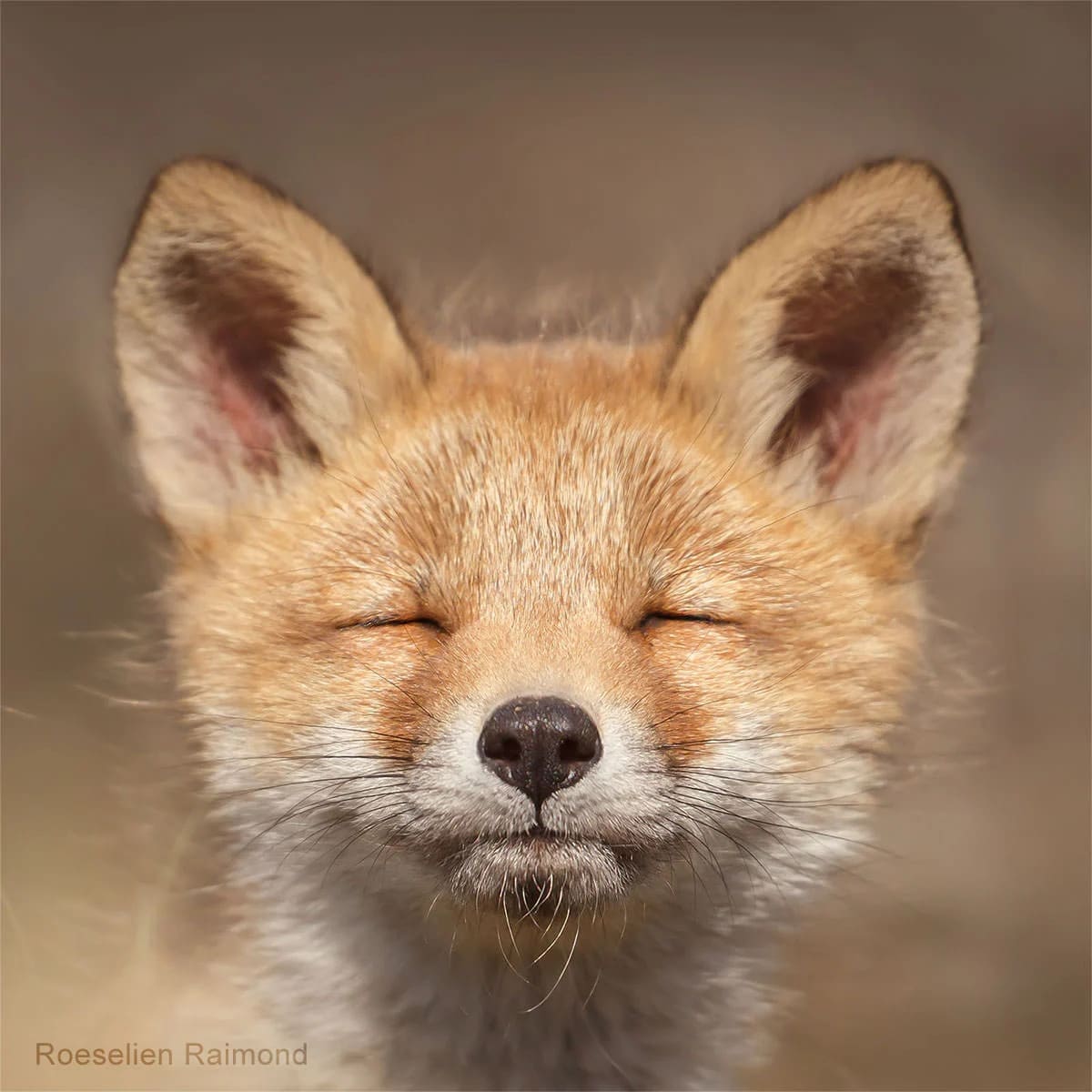 To our untrained eye, all foxes might look the same. But for Raimond, it’s as easy to tell them apart as people. “Just as you don’t usually confuse your neighbor with your uncle, the fox in the coastal area looks different from the fox in the forest. Each fox has its own face,” she says. “One has chocolate eyes, the other golden yellow. Some foxes have the cutest little eyebrows or very long whiskers, beautiful eyeliner, or strikingly white cheeks. But above all, they all have different expressions.” 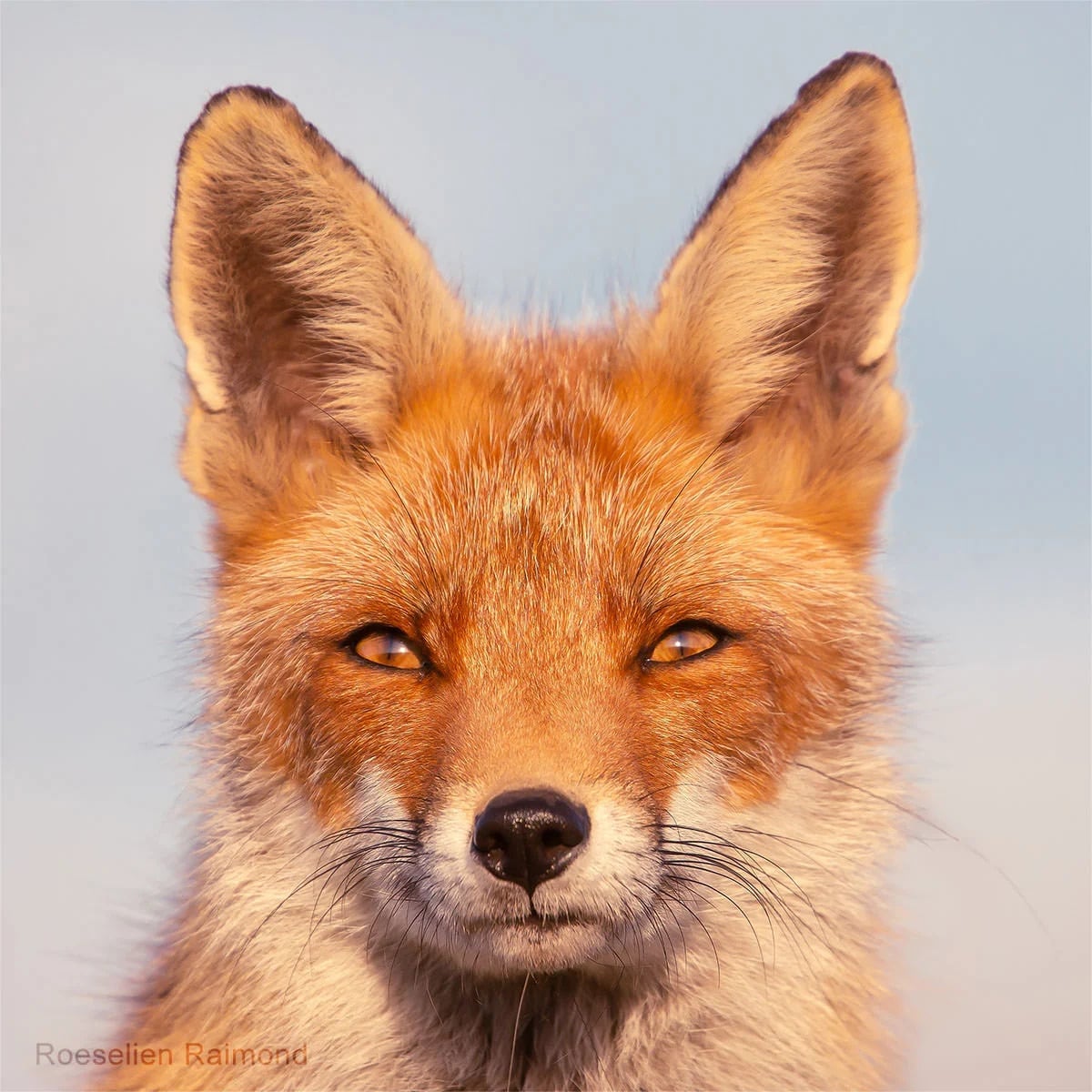 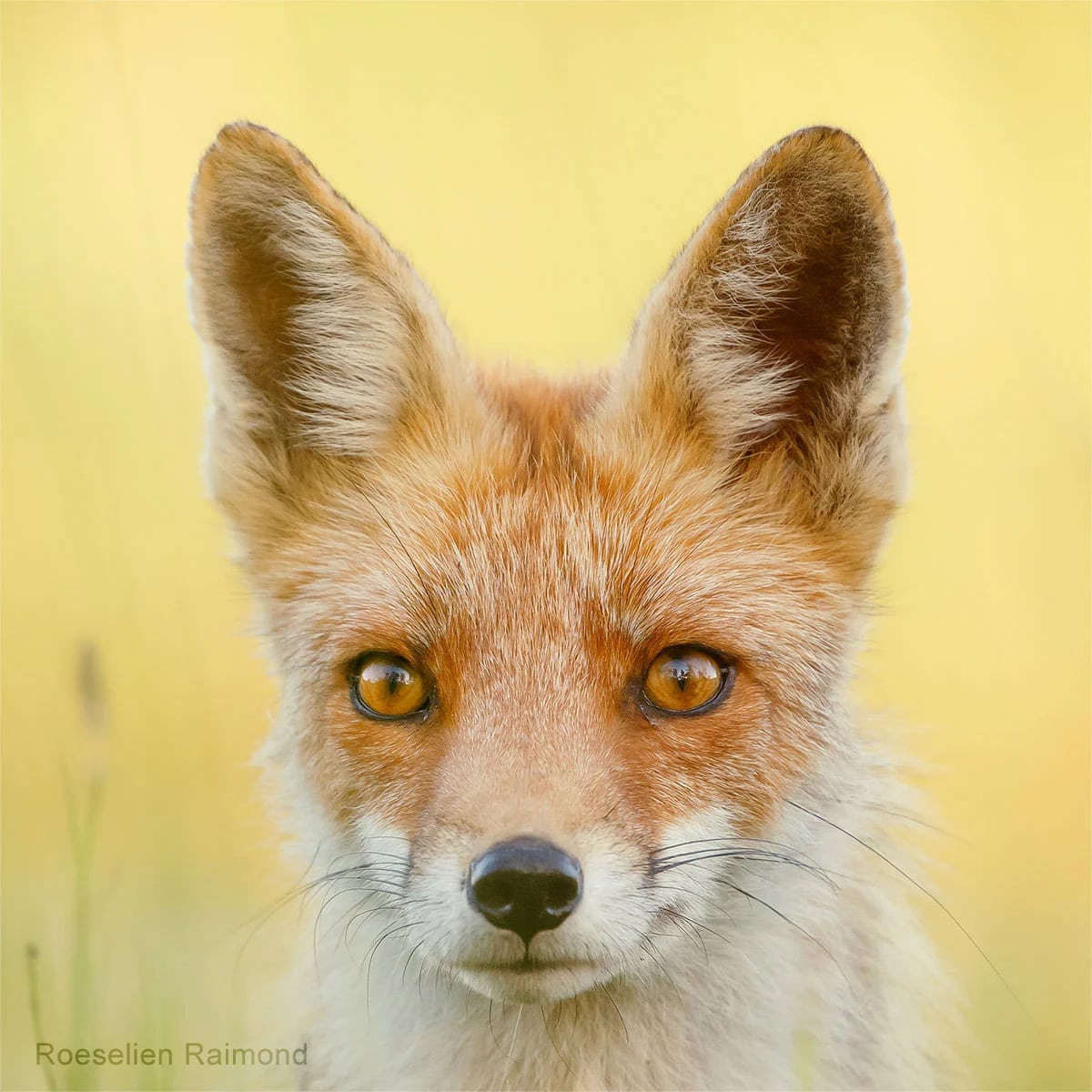 There are a lot more foxes on that page, and tons more on Roeselien Raimond’s personal page, where you can buy lovely prints of foxes, and not just their faces. She also writes, and her “about me” page shows her and gives her philosophy:

Whatever creature she captures, one central theme rules throughout her entire portfolio: Happy Animals are the Best Animals. If you want to see for yourself what she means by that, her Zen Fox Series speaks volumes.

Do look at the Zen foxes. Here’s Raimond, a Dutch photographer living in the Netherlands: 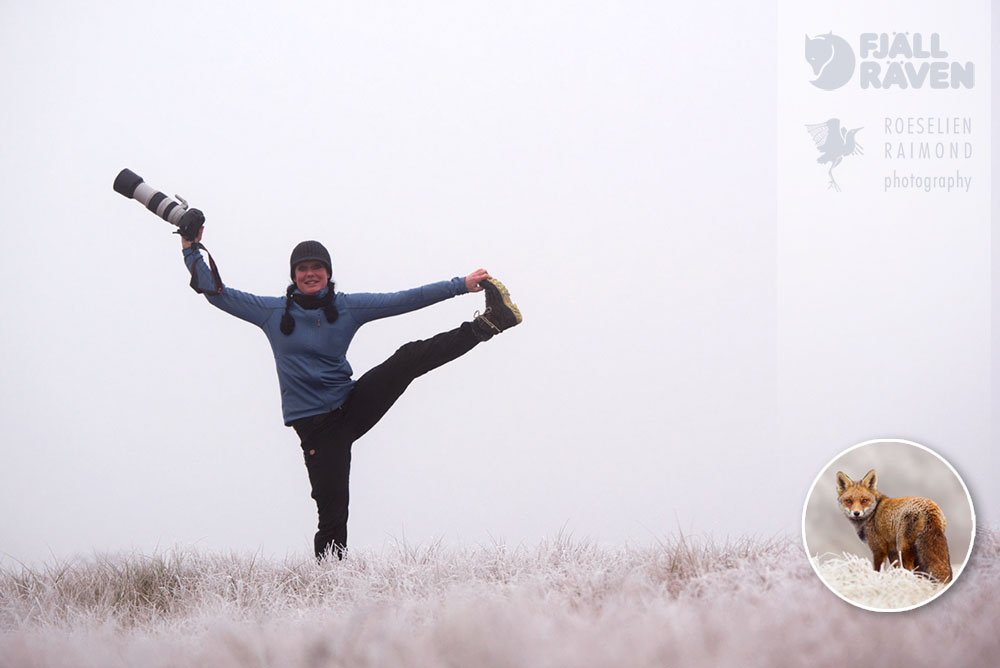