Today we have ELKS, with photos taken by Emilio d’Alise. Emilio’s notes are indented, and you can enlarge his photos by clicking on them.

In 2002, we loaded our Suburban, picked up my father-in-law, and left Michigan for a visit to Yellowstone. We usually flew places and rented cars, but this first major driving trip cemented our love of long road trips.

We saw lots of interesting sights as we crossed Illinois, Wisconsin, Minneapolis, South Dakota, Montana, and Wyoming, but this is about Elks (Cervus canadensis), also known as the wapiti, we saw in Yellowstone.

This is the first elk we saw as we crossed into Yellowstone at the North Gate after leaving Gardiner, MT. 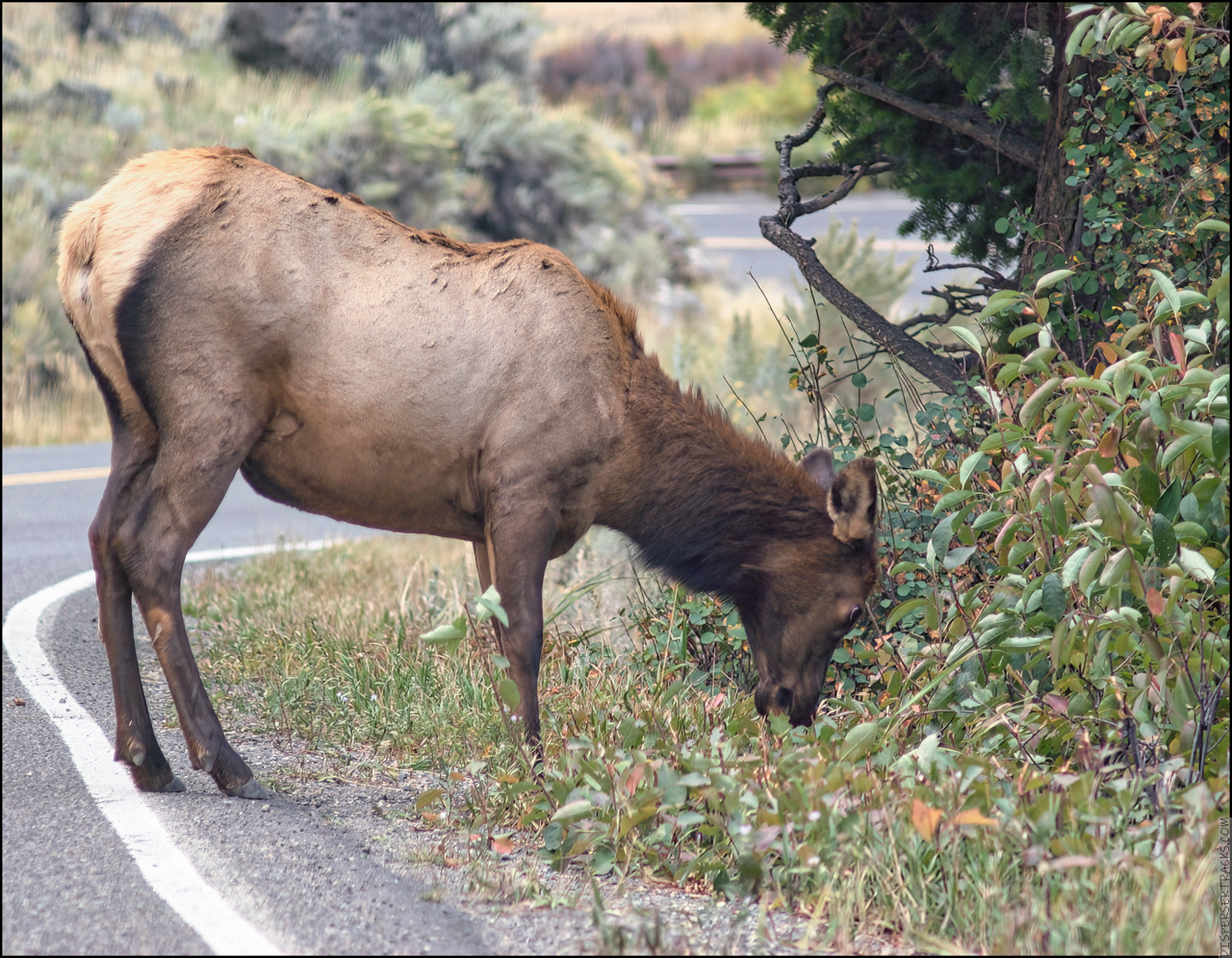 The next elks we saw were just outside Mammoth Hot Springs in Yellowstone NP proper. The two below look like the same elk, but they’re not (you can tell by the number of points and shape of their racks). 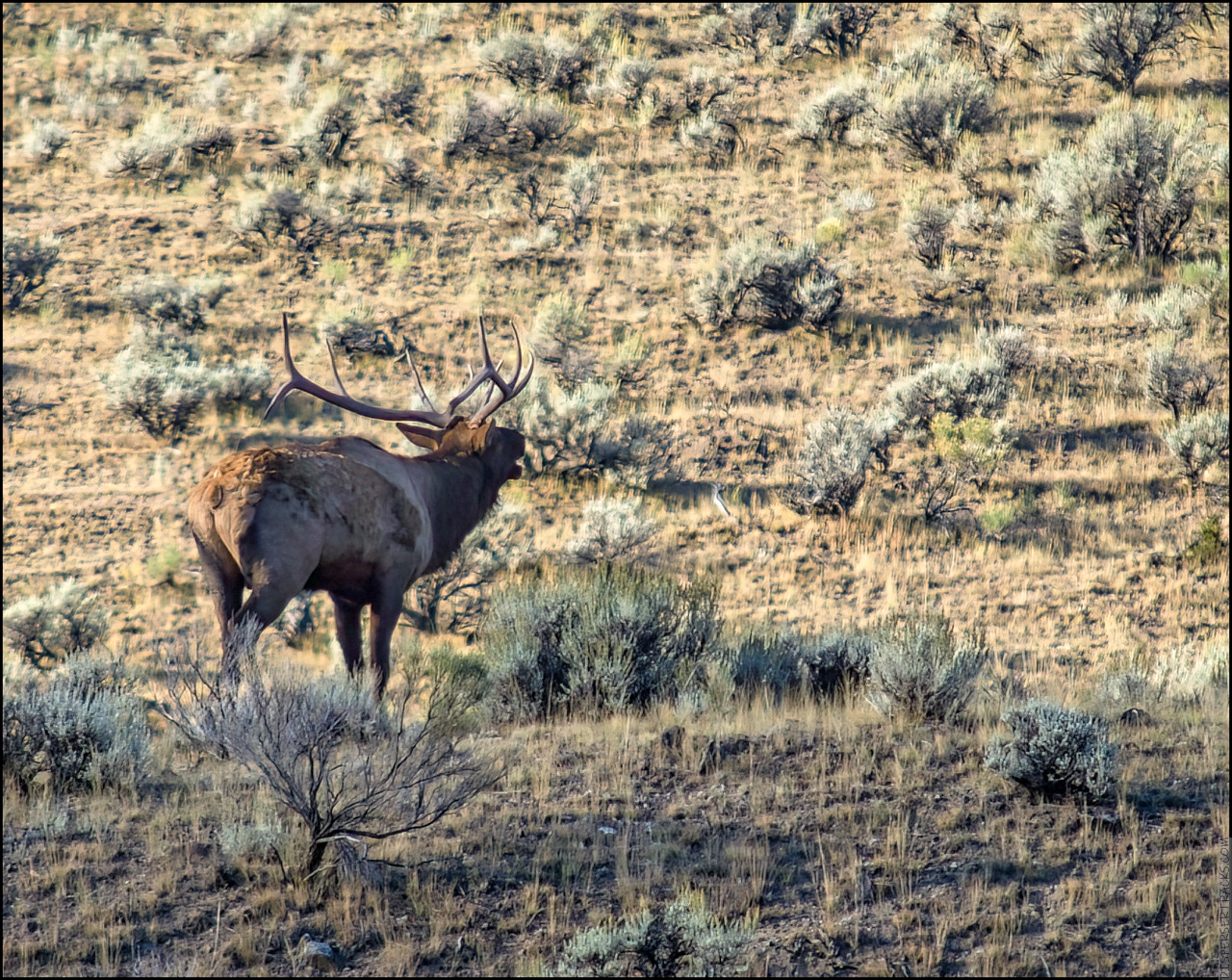 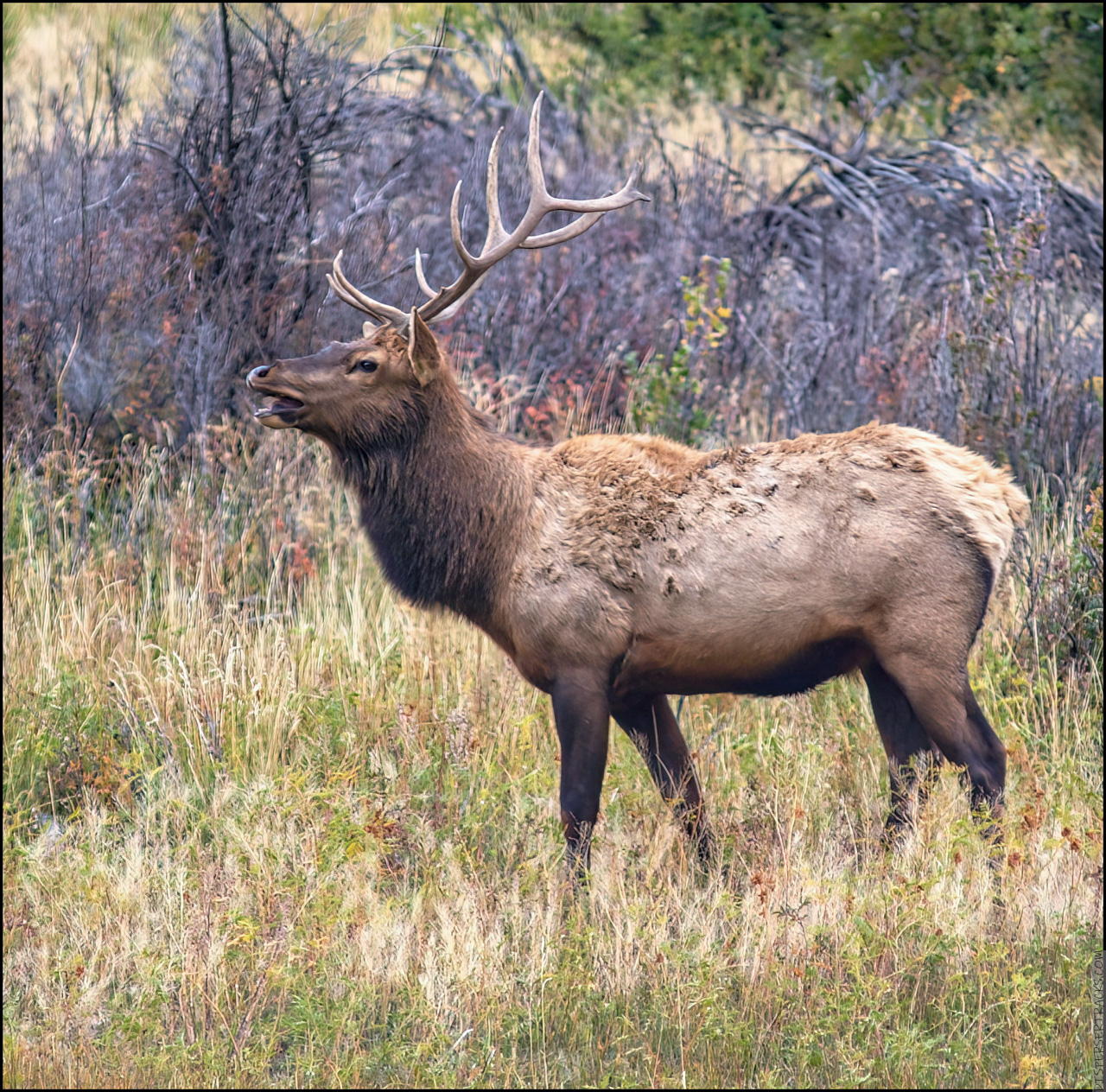 If they’re not bugling, they’re listening . . . 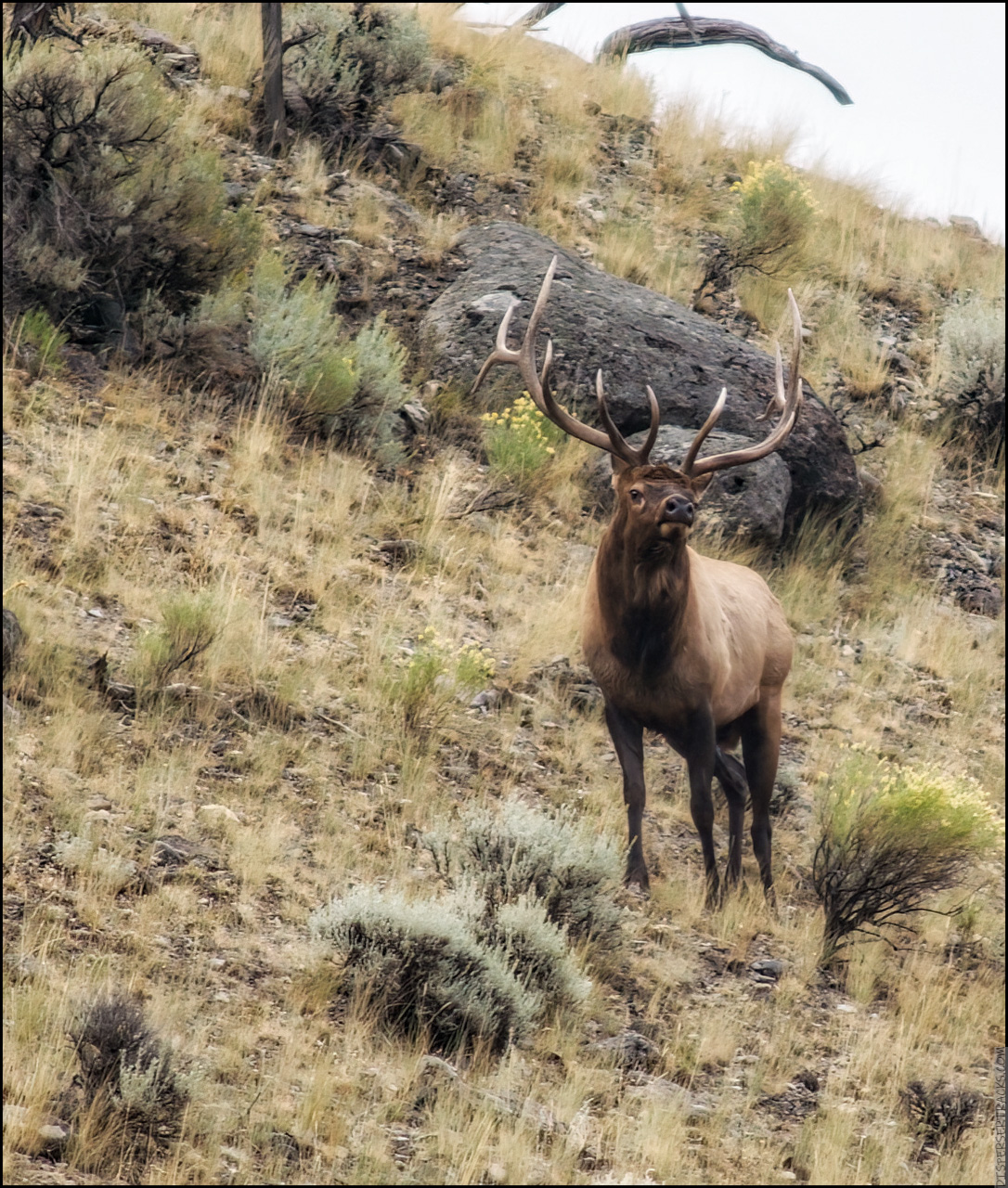 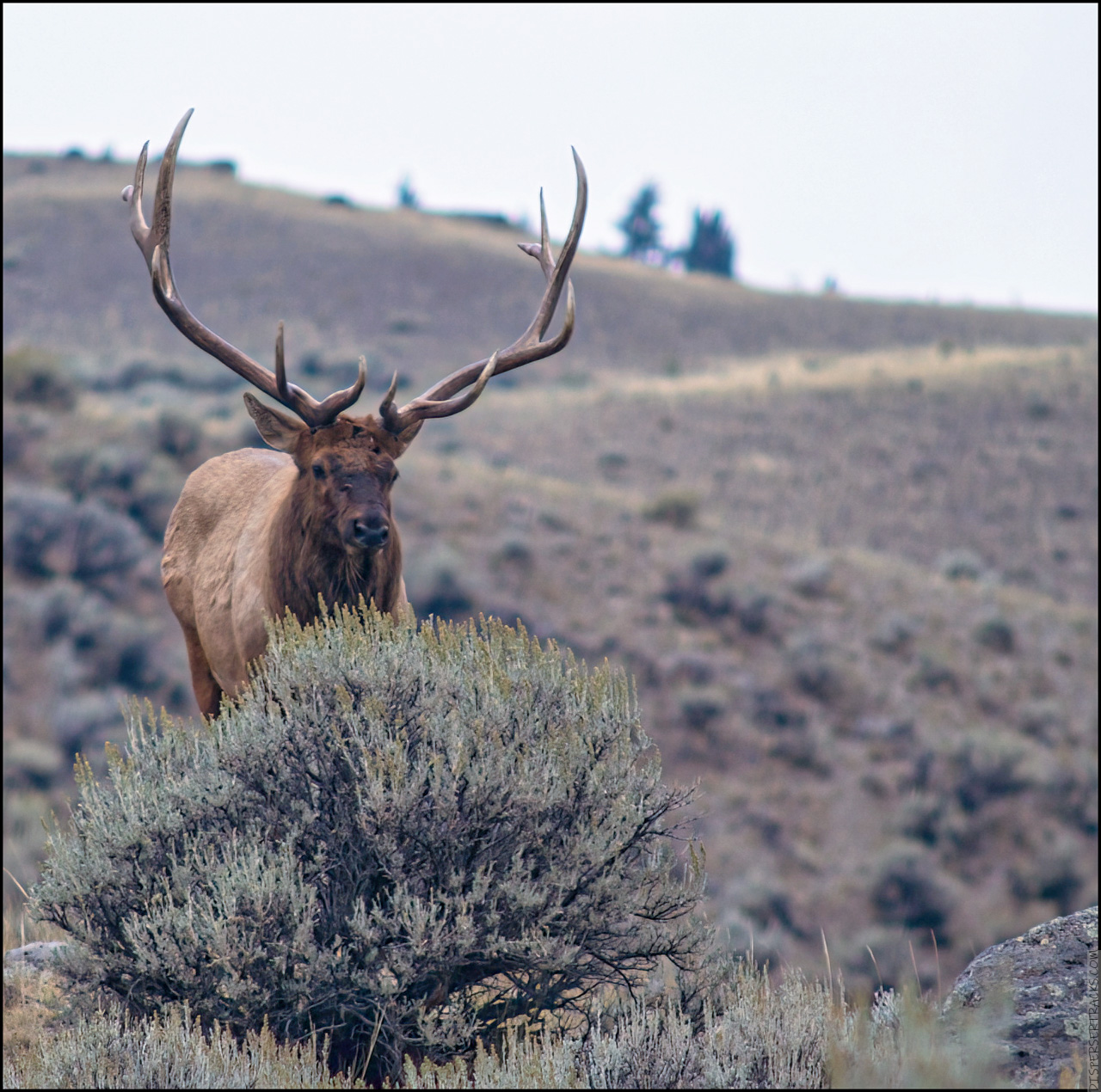 Hint: in our humble opinion, late Fall and late Spring are the best times to visit the park.

We’ve been to Yellowstone a number of times, and there’s always a herd of Elks in Mammoth Hot Springs (the males occasionally attack passing cars, something one can find on YouTube), but I don’t have any photos of that herd worth sharing from that visit.

A quick word of advice about photographing wildlife and being around large animals like Elk, especially during the mating season . . . don’t get close! Some of these photos appear as if I’m violating that advice, but here are two photos illustrating how far I kept: 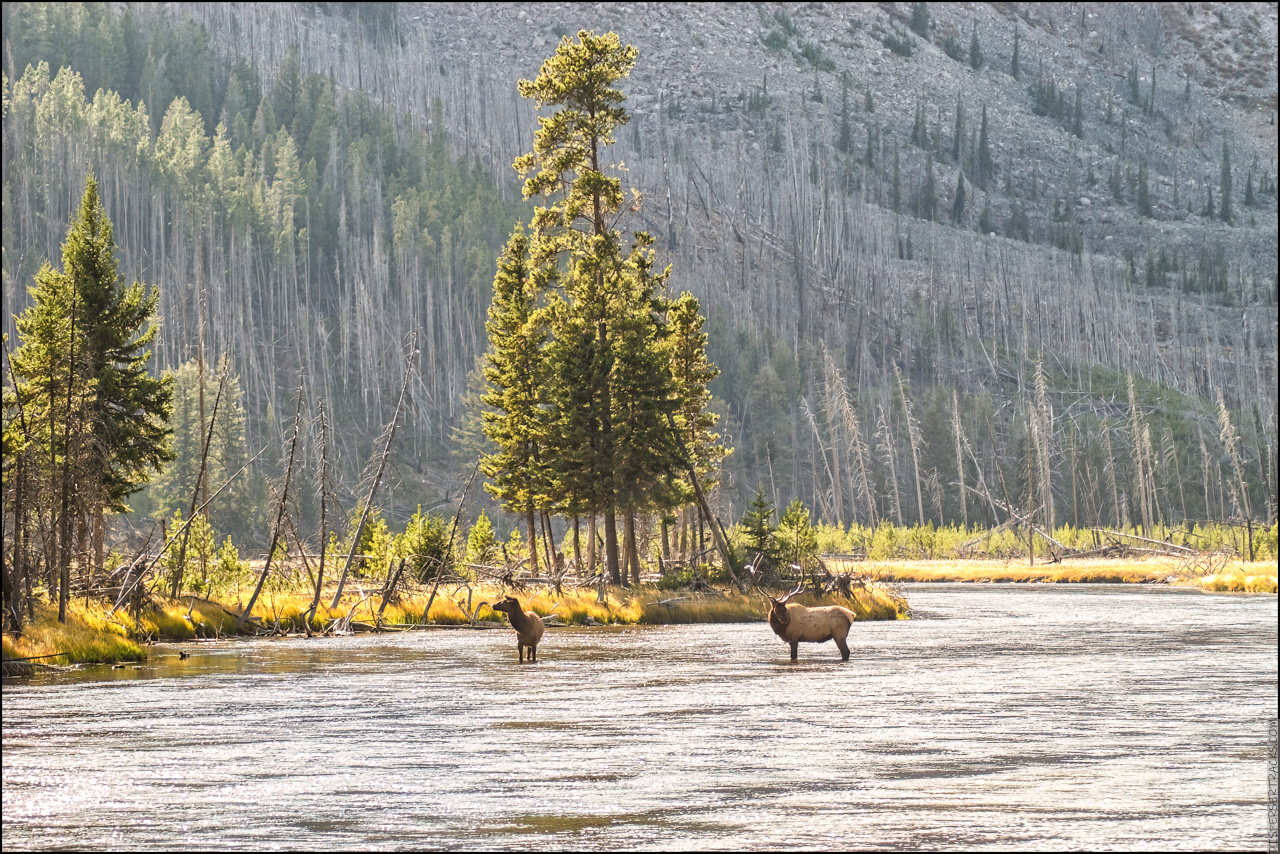 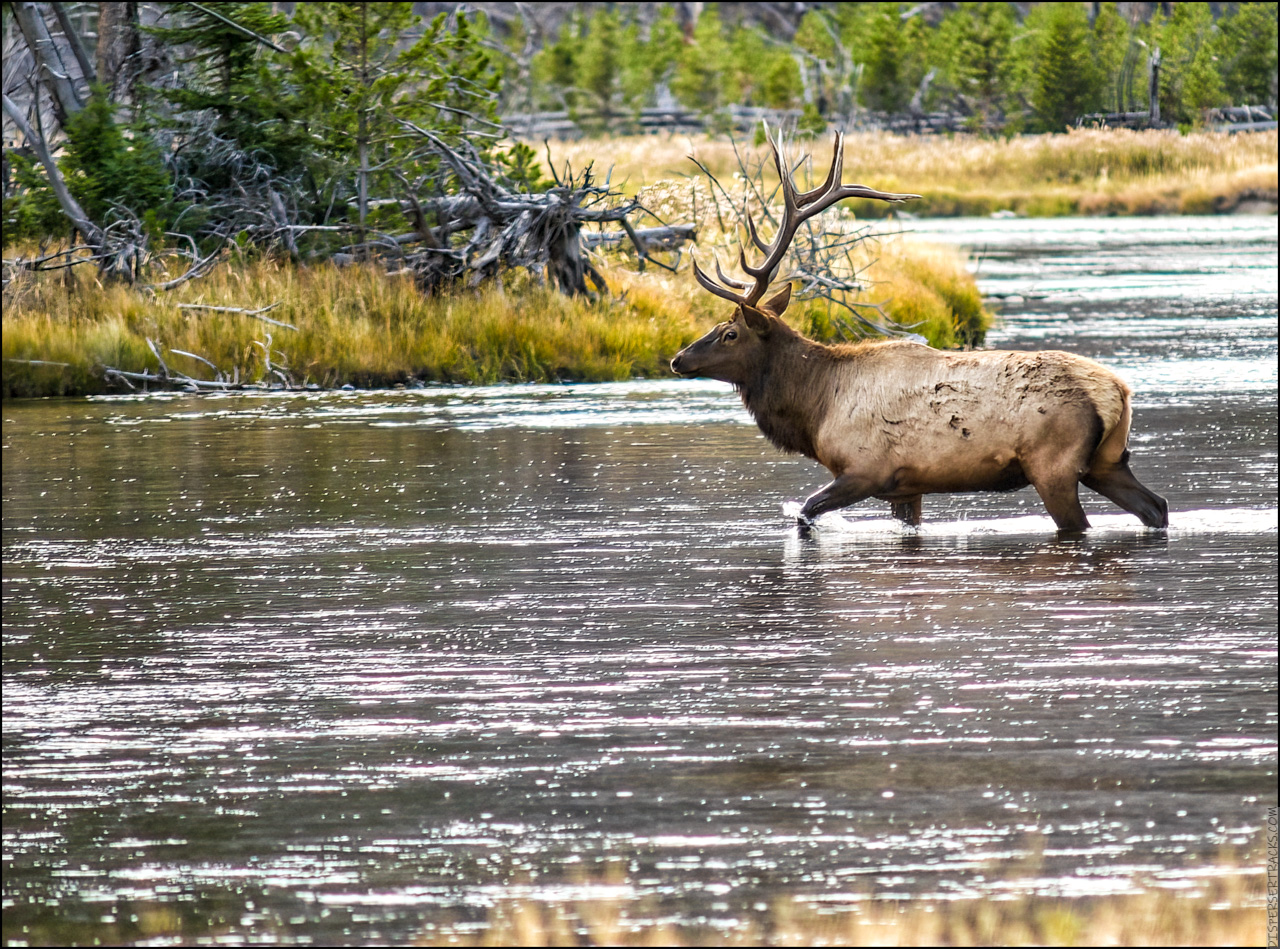 The photos were taken with my then brand new Nikon D100, the first ‘prosumer’ digital camera I owned. At 6MP, it’s far behind even what’s available from the resolution on my phone’s camera, but still miles ahead of it (and most point-and-shoot cameras) as far as image quality. Yes, I still own it, and I still fire it up to make sure it works.

For all these photos, the lens of choice was the Nikon 75-300mm f/4.5-5.6, a relatively inexpensive lens that I should have kept but that I sold after buying better lenses. 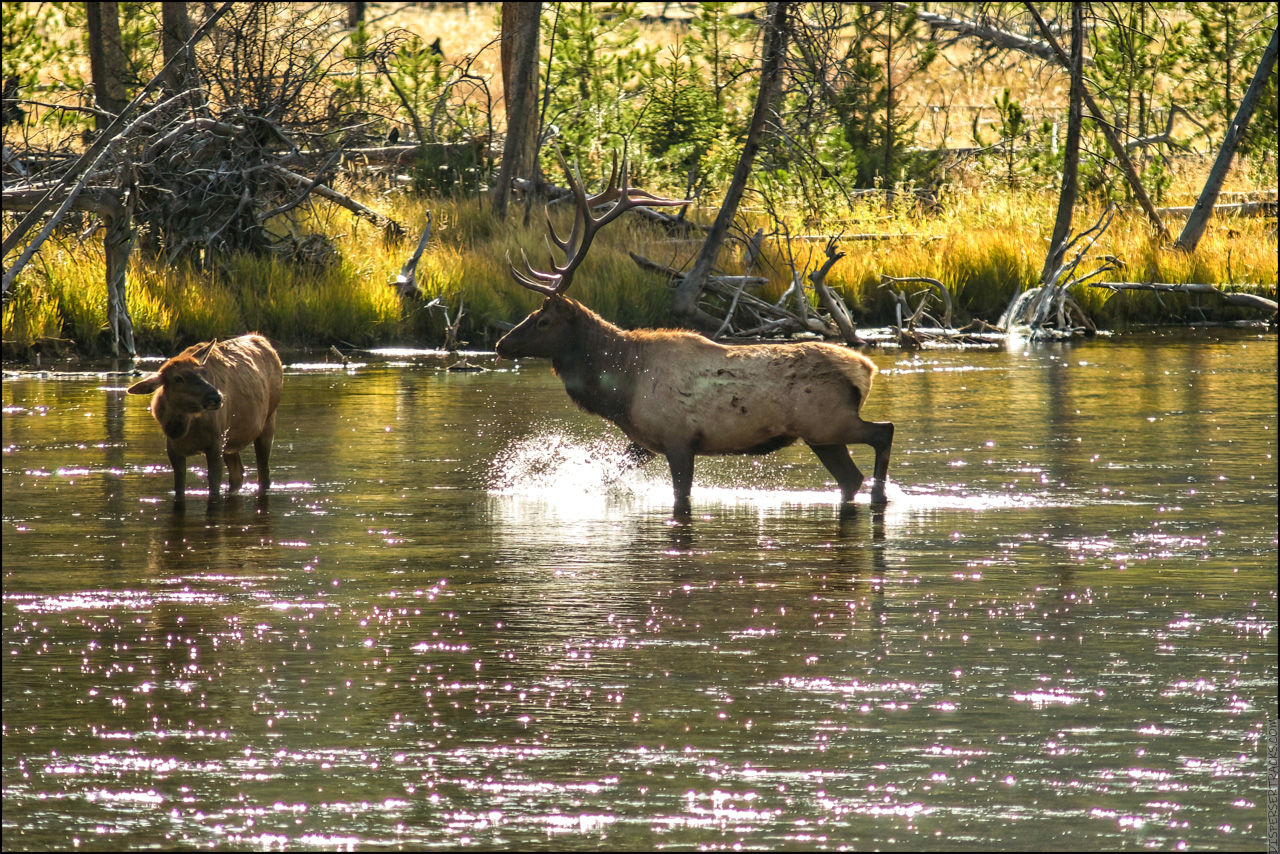 But, back to elks . . . that male was herding the female toward his other stable of females. 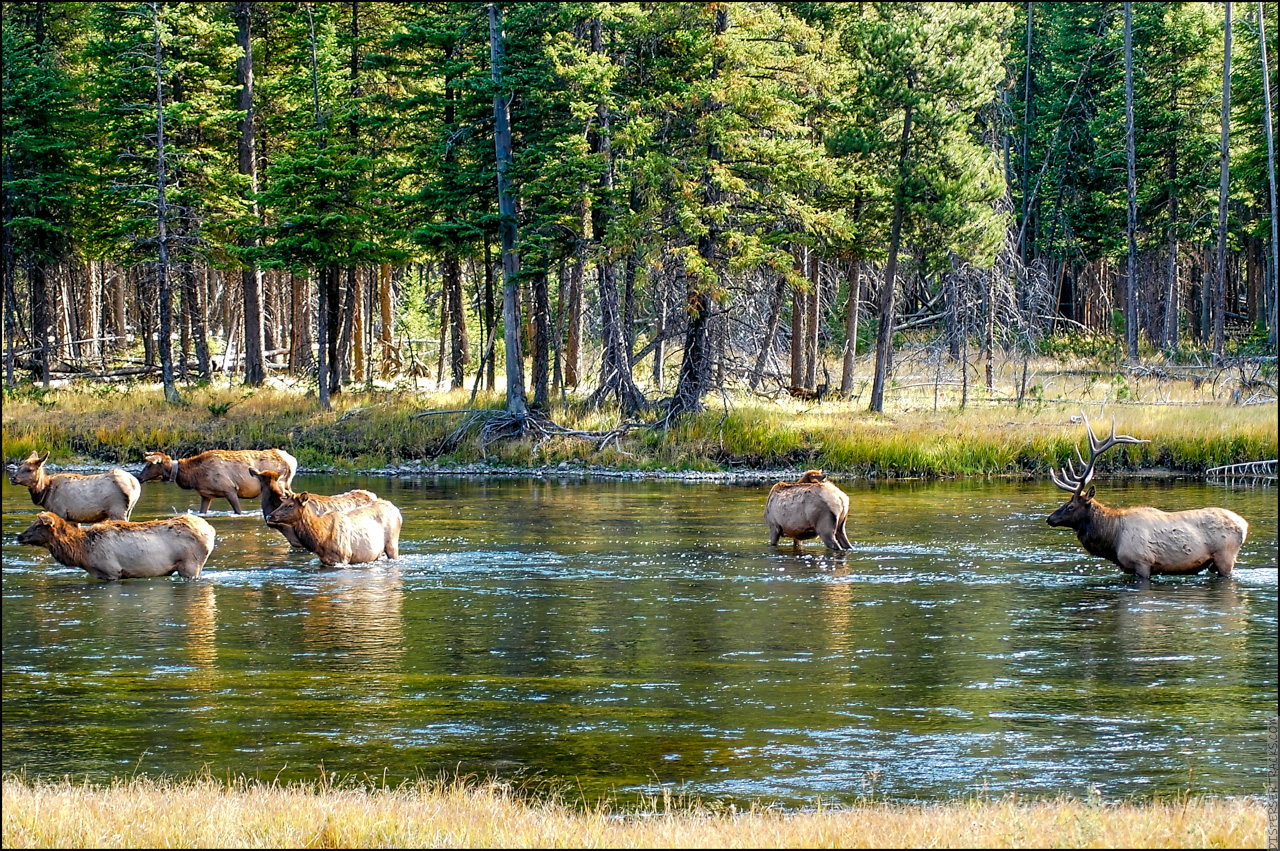 I have a limited number of shots from that session because the memory cards I had at the time maxed out at 1GB, or about 100 photos per card when shooting RAW. I had multiple cards, but we encountered this herd in the evening, on the Madison River, as we were heading back to our hotel on West Yellowstone. Meaning, all my cards were nearly maxed out and I had to switch to shooting JPGs just to get these shots. Side note: the memory card on my current Nikon D7500 allows me to snap over 22,000 photos — at 27MB each — before I run out of memory, or twice as many photos as I shoot in a year . . . but the camera also records movies in 4K, and movies chew up a lot of memory.

Even as JPGs captures, these photos are some of my favorites from the park. 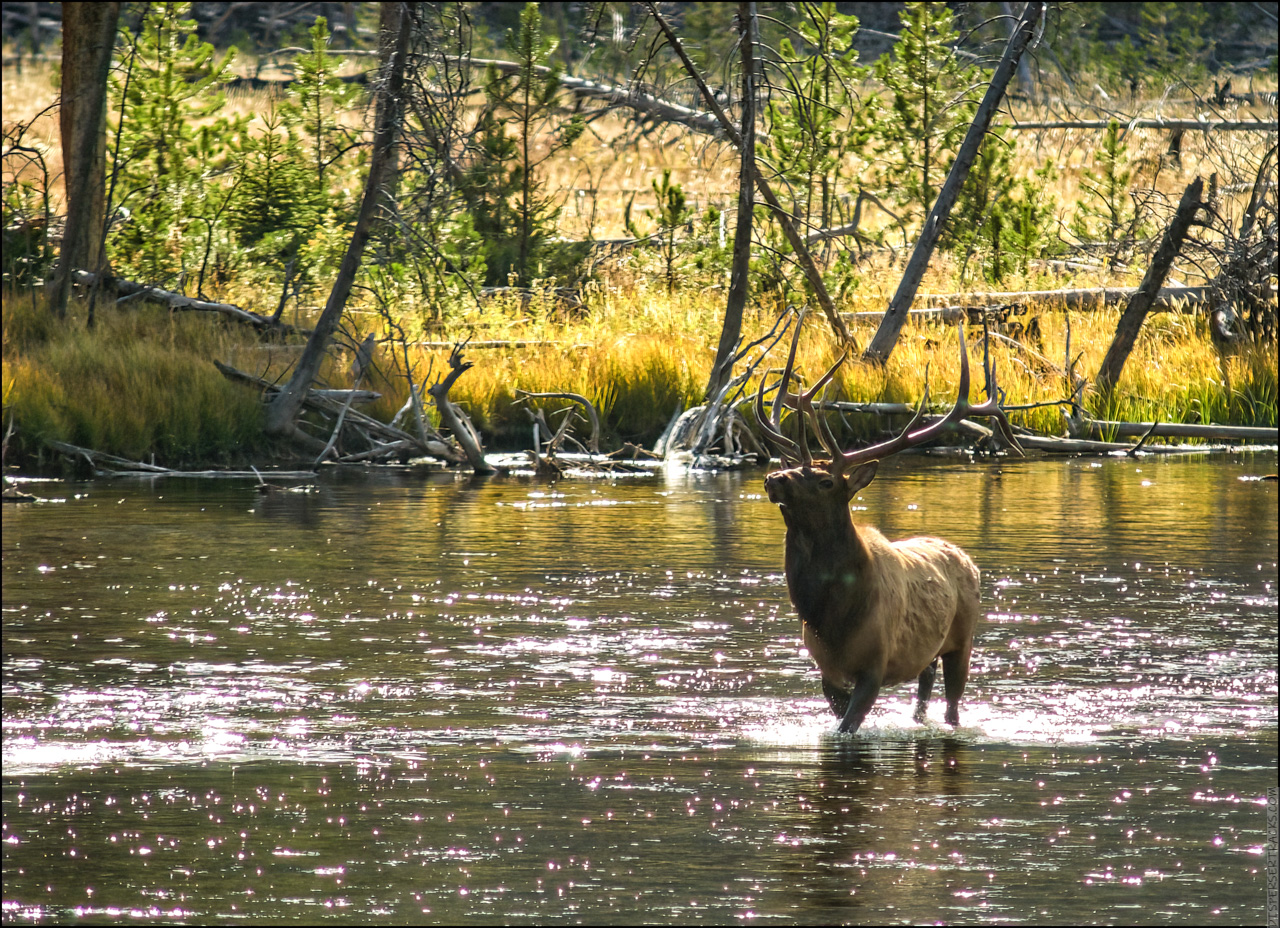 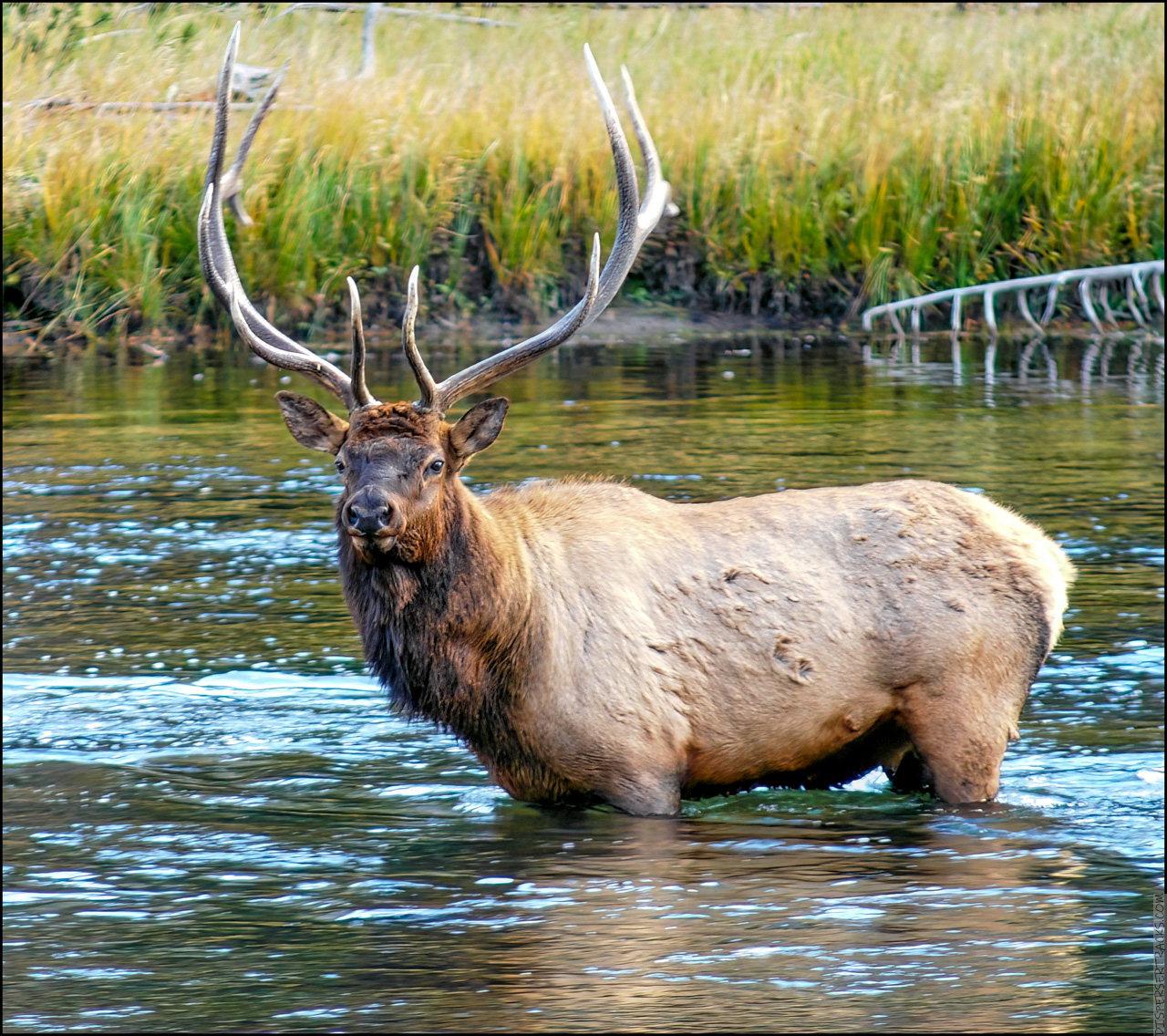 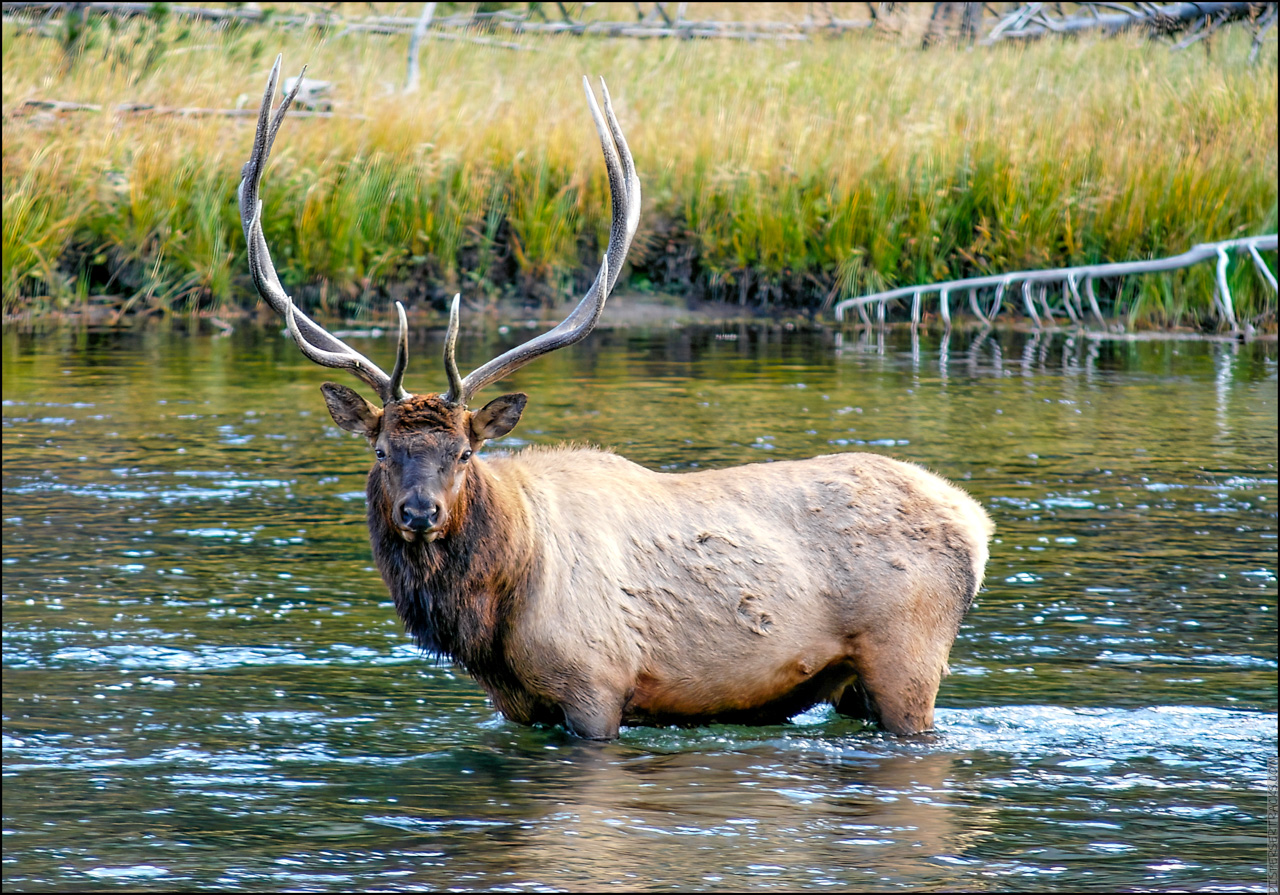