Shoot me now!  New Zealand’s system of science education continues to go down the toilet (along with Donald Trump’s papers, I guess) as everyone from government officials to secondary school teachers to university professors pushes to make Mātauranga Māori (“MM”) or Māori “ways of knowing” coequal with science, to be taught as science in science classes. All of them intend for this mixture of legend, superstition, theology, morality, philosophy and, yes, some “practical knowledge” to be given equal billing with science, and presumably not to be denigrated as “inferior” to real science. (That, after all, would be racism.) It’s one thing to teach the indigenous ways of knowing as sociology or anthropology (and but of course “ways of knowing” differ all over the world); it’s another entirely to say that they’re coincident with modern science.

The equation of “ways of knowing” like MM with modern science is, of course, part of the Woke Program to “decolonize science”. The problem, of course, is we have a big conflict—one between a “way of knowing that really works“, which is science, and on the other side a reverence for the oppressed and their culture, embodied in MM.  The result is, of course, that the oppressed win, and all over the Anglophonic world science is being watered down, downgraded, pushed aside, or tarred with adjectives like “white supremacist” and “colonialist.”

And so here we have a professor and a college administrator, Dr. Julie Rowland of Auckland University, pushing to get spiritualism and MM taught either alongside science or as science. She’s not really clear about that, but I sense a camel’s nose approaching the science tent.

Rowland is not only a structural geologist, but the deputy dean of the Faculty of Science at the University of Auckland, considered (for the time being) New Zealand’s best university.

And so, in an article in Newsroom, we see the Deputy Dean of Science telling us that science is not enough; we need more spirutuality—presumably Māori spirituality—taught in schools and Universities. Click to see another batch of bricks crumble in the foundation of New Zealand’s science 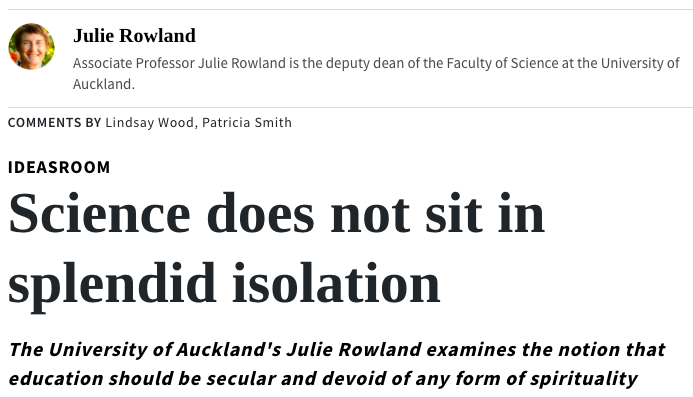 Note that Rowland not only refers to New Zealand by its Māori name, “Aotearoa”, but hastens to mention the 1840 Treaty of Waitangi (called “Te Teriti” in Māori), as the basis for the injection of spirituality into school. That ancient treaty, which says nothing about science, and wasn’t even signed by many Māori chiefs, is held up not only as the founding document of New Zealand, but is used as an excuse for Woke behavior like the stuff under consideration.

Rowland begins by giving to science with one hand and taking with the other:

Science is a rational pursuit of knowledge, but it does not exist in splendid isolation. If this is painted as the ‘ideal’ science, then it is incomplete. People do science, and people and their culture/s are inseparable.

In Aotearoa/New Zealand our nation’s origins lie with the Treaty of Waitangi. The Treaty is a formal agreement with the third article guaranteeing Māori equal rights and privileges. That means access to education within a system that seeks to fulfil the potential of every individual.

I suspect the heart of the issue is the notion that education should be secular and devoid of any form of spirituality. Proponents of this view would say a karakia (sometimes interpreted as a prayer) to open or close an event, or before guests eat afternoon tea, has no place in education. But in the context of Māori practices and values, and bringing Treaty articles to life, this makes perfect sense. And is absolutely integral.

No it’s not; not in modern education. Keep prayers and MM out of science!

Further, those equal rights and privileges do not include the right to have your legends and mythology taught as science. It’s as if the Constitution gave every Native American the right to have their “way of knowing” taught in schools, and as science. The thing is, we can amend the Constitution, but the Treaty is both nebulous and subject to conflicting interpretations. There is no final authority to rule on what it says, though certainly the Māori should and do have legal and moral equality with everyone else. But that doesn’t include equal rights to have your myths taught in science class—any more than the equality of Americans guarantees that every religious version of “creation” be taught alongside evolution. As Daniel Moynihan said, “Everyone is entitled to his own opinion, but not his own facts.”

Rowland continues by adding that NZ’s Education Act of 1877 established compulsory secular education for “colonial” kids, and extended it in 1894 to all residents of New Zealand. Back then the country had a separation of church and state, though there were religious schools.

But Rowland thinks that 1894 was a big mistake:

Over the past three decades, Māori values, which are inextricably linked to spirituality, have been taken more seriously by the education sector resulting in a shift in the meaning of a secular education. For example, by 1999, all primary and some specialist (physical education) secondary teachers were required to factor spiritual well-being into their teaching programmes. If you’d been trained to think that spirituality has no part in education, as I did then, this was challenging.

But consider the alternative. If Māori values are parked outside state education, who is education for, and on what terms? Clearly, this scenario disregards every aspect of  Te Tiriti o Waitangi and wider indigenous rights.

This is arrant nonsense. Why should there be a guarantee that everyone’s “values” be taught to them in school?  If this were America, and a Christian said that her antiabortion and creationist values should be taught in public schools, she’d immediately be slapped down by the First Amendment. For every group—nay, every person—has different values. Even the constitution and meaning of MM differs among Māori scholars!  If a Māori child needs her values buttressed, there is an entire and tightly knit community, the iwii, to accomplish that.

The purpose of education, at least as I see it, is to impart generally accepted knowledge to students, and to teach them how to think and how to defend and analyze their views. This is precisely the opposite of MM, which is a kind of theology that cannot be questioned or falsified. Under my construal, education is indeed for everyone, but for those groups who have spiritual/religious/moral values that differ from those of other groups, they have to get those things reinforced on their own time.

Finally, we see below that a dean at Auckland University’s faculty of science starts plowing the ground to make way for the teaching of MM as science. This is a seemingly unstoppable juggernaut that’s flattening both science and the educational system of Aotearoa:

In my view, efforts to acknowledge and understand mātauranga Māori (Māori knowledge) enrich the capacity of students and staff to connect across different world views, which is critical if we are to address the inequities in Aotearoa, let alone global crises like climate change. Acknowledgement and understanding of beliefs leads to richer engagement and the building of a relationship of equals.

Universities are the last in the education line to grapple with the duality that comes with meeting Treaty obligations. There is widespread support for this among academics who see the relevance in multiple ways. Our universities are not at a crossroads choosing the path of the universality of science or a race-based ideology. We are on a dual carriageway and the momentum is building.

You see what she’s doing here? The last two sentences give away the goal. I’ll repeat them:

Our universities are not at a crossroads choosing the path of the universality of science or a race-based ideology. We are on a dual carriageway and the momentum is building.

She argues that there’s no need to give precedence to science over whatever she construes as a “race-based ideology”, which to me suggests she’s referring sarcastically to how some characterize MM. The last sentence, at least, implies that both MM and science are speeding along that “dual carriageway” into the science class. And yes, the momentum is building as the Valorization of the Oppressed has dictates that MM is coequal to science. According to the good Dean, you can have your science and your mythology too. Did you know that, according to MM, the Polynesians discovered Antarctica in 700 AD (the real finders were the Russians in 1820), centuries before the MM came to New Zealand? This is all oral legend, and it is wrong. And it’s just as wrong as the “theology” of MM, with its panoply of gods and legends that can’t be supported by evidence.

It’s unbelievable that a science dean at New Zealand’s best university can put out this kind of palaver.  The nation’s scientists, who by and large seem adamantly opposed to this stuff, have no say in the matter, and if they object, they could be fired. It’s politics, Jake!

People of Aotearoa: rise up against this nonsense! Do you want your science education to become the laughingstock of the world? For that is what will happen if the benighted keep barrelling along that dual carriageway of science and nescience.