John McWhorter has written a lot about the “n-word” in his New York Times pieces, and his new column should be the final word on it. But of course it won’t be. Perhaps McWhorter had ha his say, but the critics will keep up the mobbing and pressure on those who use the word in even a didactic sense.  Those people, including NYT science columnist Don McNeil and a Chicago high-school teacher, are almost inevitably fired, no matter how long ago the word was used.

The crucial aspect of this mobbing is that intent doesn’t matter. It makes no difference to the Woke Word Police whether you use the word as a racist slur (that’s never okay), to quote Mark Twain, or in a law-school exam question as an example of a defamatory slur. All that matters is that the word was uttered by a white person.  But of course, as McWhorter notes in his latest piece, intent does matter, and always has. Here’s how we know that. Black people use the word repeatedly, both in rap videos and as a sign of affection. Dave Chapelle uses it as a synonym for fellow blacks. Those are okay, because the intent isn’t scurrilous! So intent does matter!

Click to read. I’ll give just a few quotes. (McWhorter mentions another case about the Slate podcaster Mike Pesca who was fired for using the word twice on his podcast as a “mention” rather than as a “usage”—the distinction that McWhorter draws between didactic uses and racial slurs. People are getting fired for “mentions” as if they were slinging slurs. 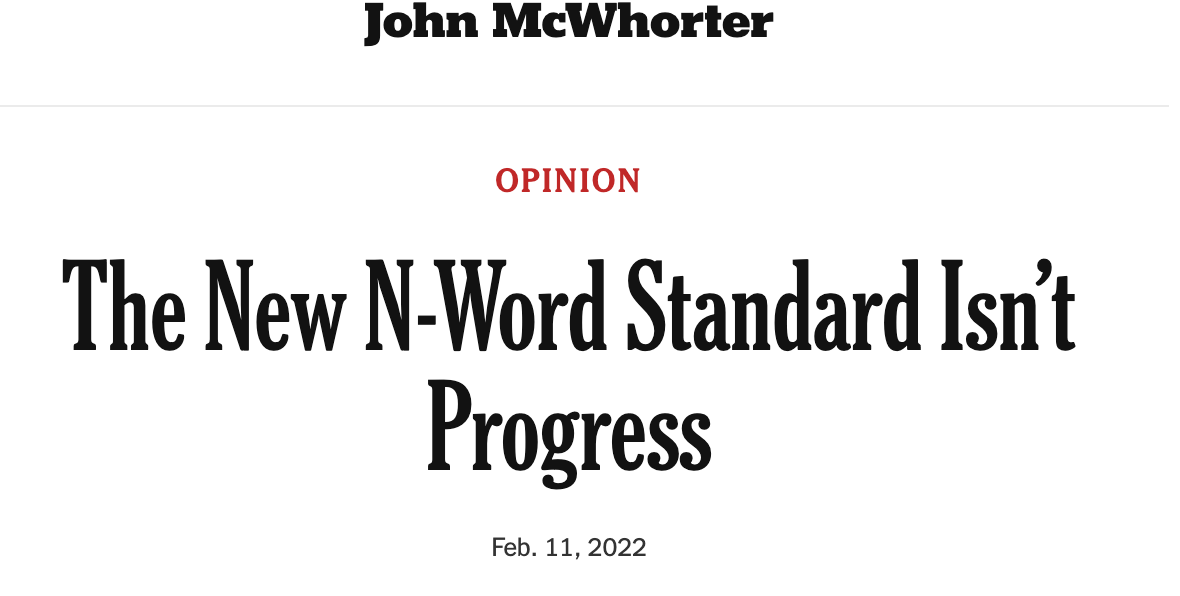 Headings are mine; McWhorter’s words are indented.

I suppose the idea behind this new idea — that the problem isn’t just using the N-word as an insult, but uttering it in any context, including quoting someone else — is that the old approach was insufficiently antiracist. But it is a strange kind of antiracism that requires all of us to make believe that Black people cannot understand the simple distinction between an epithet and a citation of one. Missing that distinction, or pretending to, is at best coarse. And we are being instructed to carry on as if this coarse approach is a kind of sophistication.

Plus, the assumption that Black people are necessarily as insulted by the mention as by the use implies a considerable fragility on our part. An implication that I reject and resent. If all someone has to do to ruin your day is say a word — even in the process of decrying it — your claim on being a strong person becomes shaky. I made the same point last week in a somewhat different context, and I realize that some are affronted by my calling their fortitude into question, but I am mystified by how comfortable so many of us are in giving white people this power over us.

On the performative nature of overreaction:

If all this falling to pieces served some larger purpose, perhaps there would be room for classifying it as a useful new standard. If people thought, for example, that it would help make Congress pass a reparations bill or force the Supreme Court’s right-leaning majority to rethink the Voting Rights Act, then they’d be making some kind of sense.

But none of that will happen, and this real life is all we have. Hypersensitivity for its own sake is self-destructive. It exerts a drag on the momentum of engaging in actual political activism, and even in our imbibing the wonders of this existence that we are all granted a spell of.

Why the use/mention distinction is valuable and why the “intent doesn’t matter” trope is risible:

But acquaintance with the straightforward use/mention difference is, or should be, a badge of membership in a modern society. Anyone who’s willing to process Black people referring to one another with the N-word, as a term of endearment or a form of word empowerment (and many, including me, are, even if we don’t use it this way ourselves) understands that a spoken or written instance of the N-word can mean more than one thing. As such, they should be able to appreciate, if not embrace, that quoting a savory rap lyric or comedian’s routine that includes the word or just referring to the word to note its prior application are not the same thing as deploying it as an insult.

Our current nervous social contract on this word requires us to act as if there is no such difference. But all of us, Black, white and otherwise, can see past this. The sky won’t fall if we admit it. It’s time to stop putting people in the stocks for mentioning the N-word when they’ve done nothing history will judge as wrong.

One of our readers, John Donohue, pointed out a few days ago, in our discussion of the Chicago teacher fired for using the n-word, that Joe Biden himself had used it twice in a didactic fashion. (That is, Biden read the words of someone else who used the word—NOT considered excusable these days.  Here’s Biden’s usage in June, 1985, during discussion of William Reynolds’s nomination for Associate Attorney General for Civil Rights, which Biden is opposing. (Reyolds was confirmed and served until 1988.)  The two mentions of the n-word are 41 seconds in.

Reuters has an article on Biden’s utterances, which, sadly, have been turned into videos in which he appears to use the word repeatedly as a racial slur. That’s heinous.  These “fake news” videos were, of course, produced by acolytes of Trump: “The Committee to Defend the President”. Reuters, acting as Snopes, says what we have here is a MENTION, not a usage. And that’s clear from this 45-second video.

Two seconds into the [fake, pro-Trump] video, the narrator says that Biden “repeated the N-word twice on camera,” while on-screen text reads, “We don’t need any more [N-word] bigshots” – C-SPAN 6/5/1985”

As presented, the video implies that the words spoken by Biden were his own opinions, when actually he was quoting a white legislator and trying to expose the comments as racist.

It is not the first time that this quote is taken out of context to criticize Biden ( here ). Reuters Fact Check recently debunked a misleading compilation of Biden footage that included this clip, visible here

The alleged quote was part of a confidential staff memorandum that Biden referenced on several occasions ( bit.ly/38kHeMo ) at William Reynolds’ nomination for becoming Associate Attorney General on June 4 and June 5, 1985. Moments captured on camera of Biden mentioning the quote are visible here ( cs.pn/2ZRBRSz , minute 1:29:15) and here ( cs.pn/3fUto6x , minute 17:14).

During the two-day hearing, Biden quoted these words from a white legislator who opposed the Louisiana redistricting plan in 1981, a case that was criticized for being biased against Black people. Biden mentioned the case to argue against Reynolds’s nomination ( here ).

The obvious aim of this post is to support of McWhorter: Biden is using the word didactically, as a “mention” that is, in fact, meant to cast aspersions on Reynolds. Biden should suffer no opprobrium for this. But, you know, if it wasn’t Biden but an obscure reporter whose utterances were uncovered after a few decades, he might be fired.

I’d like to ask those who maintain that “intent doesn’t matter” if Biden’s usage here is morally equivalent to him using the n-word as an insulting racial slur. Would they say “yes”? No rational person would agree, and I don’t think Biden’s impeachment is impending. It’s just that when the current liberal President is shown to have used the n-word in the past, and in the way shown above, the distinction between “mention” and “usage” suddenly becomes very clear.

31 thoughts on “On Biden, McWhorter, and the n-word”