UPDATE: Reader Merilee thought that this collection of grammatical malapropisms might be appropriate for this column: 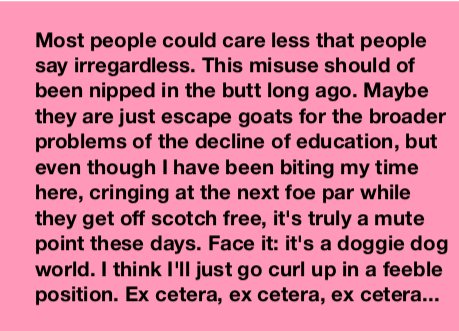 This is the special Pandemic Edition of WaPIA, as everyone is grouchy and surely we’ll have lots of people who want to share the language that twists their knickers.  I have six—count them, six—bits of argot that irritate me.

2.) “Nominal” meaning “normal”  This pretentious term should just go away. It has two meanings: one for the whole Anglophonic world, meaning “modest”, as in “nominal returns”, and the other for NASA geeks, who use it to mean “normal”: as in “performance is nominal”. Do space people think they’re so special that they need their own words? Why can’t they say “normal” or “as expected”? This is, of course, the group that also coined “copacetic”, which pretty much means the same thing.

3.) “Any more” versus “anymore”. Let’s get this straight: “any more” refers to quantity and “anymore” to time. You can say “I don’t want any more tequila; I’m already drunk.” And you can say, “You’re no fun anymore, you don’t drink.” “Anymore” as one word means “any longer”.  When you should not use “anymore” is as a synonym for “now”, as in “They don’t serve tequila here anymore.” That’s just heinous!

4.) “Medaled” as a verb in the Olympics. Every two years this comes up, and every two years it’s wrong. “Medal” is a noun; it is not a verb meaning “to get a medal”. Here’s a wrong usage: the video “10 most medalled male athletes at the Summer Olympic Games“.

Now some of you Pecksniffs are going to root around in a dictionary and find that what I see as wrong usages are actually valid. Maybe some wrongheaded dictionary tells you that “medal” can be a verb. You know what? I don’t care!  These phrases irritate me, even if some lexicographer thinks they’re fine.

5) “Funeralized”.  Now this is a new one on me, and I didn’t even try to look it up. It apparently means, “was the object of a funeral service”. When I was preparing tomorrow’s Hili dialogue, I noticed that Gregory Hines, the dancer, died quite young. Going to his Wikipedia page to find out why (yes, we elders do that), I read this (my emphasis):

Hines died of liver cancer on August 9, 2003 en route to the hospital from his home in Los Angeles. He was diagnosed with the disease more than one year earlier, but informed only his closest friends. At the time of his death, production of the television show Little Bill was ending, and he was engaged to female bodybuilder Negrita Jayde, who was based in Toronto.

He was funeralized at St. Monica Catholic Church in Santa Monica, California and buried at St. Volodymyr Ukrainian Catholic Cemetery in Oakville, Ontario.

Is that a word in anybody’s dictionary? And even if it is, it shouldn’t be in there.

6). “Deep dive”, meaning “intensive scrutiny”.  This is the latest phrase used by the media to show how hip they are, and I blame the media for popularizing it. It’s one of those phrases that shows you’re resorting to trite and widespread phrases instead of trying to think of a fresh way to say something. Here’s a typical example from HuffPost, the doyen of “we’re-the-cool-kids” journalism:

You know, even the term “close look” would be better.

Your turn! What phrases curl the soles of your shoes or burn your onions?

296 thoughts on “Words and phrases I abhor”