Not long ago, I reviewed for the Washington Post Kathryn Paige Harden’s newish book on genome-wide association studies (GWAS) of human traits and how we can use the results to bring about social change. Click on the screenshot to read my take, or request a pdf: 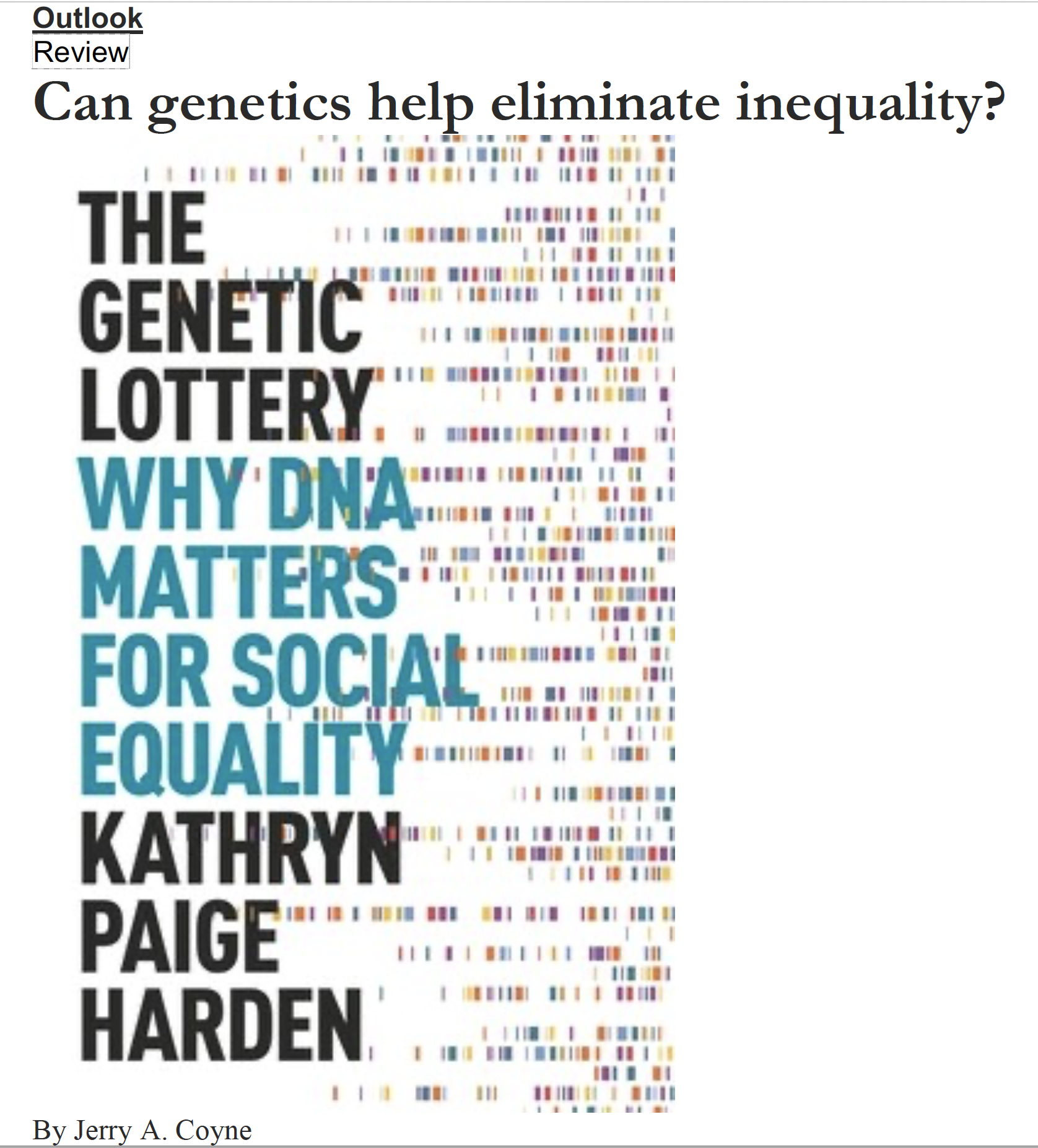 Harden wrote the book with a social purpose that. she thought, could be implemented through the new technique of GWAS. I explain the method in my review, and so won’t reiterate it here, but it aims to identify many regions of the human genome responsible for genetic variation in a chosen human trait in one population. The trait she concentrates on is “educational attainment” (years of schooling), which is highly correlated with nearly every measure of “success” that you can think of—particularly wealth and income. And indeed, Harden, summarizing previous work, points out that over 1200 regions of the DNA can affect the value of this trait.

What this means is that even in a newborn child, you can predict how well a child will succeed. The predictability isn’t anywhere close to 100%, but still you can “rank” children by their GWAS scores in their likelihood of “success.”

Now this sounds like a hereditarian nightmare, with the possibility of ranking people as Aldous Huxley did in Brave New World: alphas at the top and the useless epsilons at the bottom. But although Harden is a hereditarian, her aims are not stratification or ranking, but equity. Her view is that once we know the genes responsible for academic achievement, we can use that information to help achieve equity in academic achievement.

And that’s where the big problem lies in her book: she couldn’t propose a good a way to use this information to achieve “equity”.  While her description of the genetic work in the book’s first half is excellent, the remedies she proposes in the second just aren’t there. In fact, I can’t see myself how to use this kind of genetic information to promote academic success. Suppose you know from genotyping an infant that that kid has an expected chance of graduating from high school that’s only 80% of the average value. What do you do with that information? Start tutoring the kid as soon as possible? Give more money to schools to boost everyone (this hasn’t worked)? There is no solution that doesn’t involve differential treatment, but Harden doesn’t want that, for it creates classes of “smarter” and “dumber” people, branding them from the outset.  It turns out that I wasn’t the only reviewer to spot this problem. And I’d claim that it’s easier to manipulate the school environment than to genotype a gazillion kids. (All genetically-based interventionsmust be tested empirically, anyway.)

But I’m not writing this to reiterate my review, but to bring up some stuff that I had to leave out of my review. So I’ll put below an argument that I thought was important but omitted from that review, both because I was severely limited by space and because a few people who looked at my draft saw this as superfluous. Now I regret not having written what I say here. Bolding below is mine.

These are quotes from my rough draft about Harden’s argument that we need to pay special attention to inequalities based on genetics because they’re a matter of “luck”.  I had to omit these bits (indented):

Harden’s motivation for using genetic differences to engineer equality comes from the fact that those differences are a matter of luck: the vagaries of how genes sort themselves out during egg and sperm formation. It’s unfair, she says, to base social justice on randomly distributed genes: “People are in fact more likely to support [wealth] redistribution when they see inequalities as stemming from lucky factors over which people have no control than when they see inequalities as stemming from choice.” [p. 206]

But is there really “choice”? Like many scientists and philosophers, I’m a determinist who rejects the idea of free will—at least the kind that maintains that there is something more to behavior than the inescapable consequences of your genetic and environmental history as well the possible indeterminate (quantum) laws of nature. In this pervasive view, at any one moment you could have chosen to do something other than what you did.

But there’s no evidence for this kind of free will, which would defy the laws of physics by enabling us to mystically control the workings of our neurons.  No inequalities stem from “free choice” and so everyone’s life results from factors over which they have no control, be they genetic or environmental.

Harden actually admits this dilemma: “If you think the universe is deterministic, and the existence of free will is incompatible with a deterministic outcome, and free will is an illusion, then genetics doesn’t have anything to add to the conversation. Genetics is just a tiny corner of the universe where we have worked out a little bit of the larger deterministic chain.”  [p. 200] And with that statement she pushes her whole program into that tiny corner.

But then Harden adds something like “I’m not going to get into the issue of free will.” By doing that, she punts on the most important issue of her book. Since our lives are completely the uncontrollable results of our genes and our environments, which even a compatibilist will admit, why should we see genes as a matter of “luck” but environment not? The family we’re born into, the people we meet, and all the influences of our lives are a matter of “luck”—and by “luck” I mean “naturalistic factors over which we have no willful control.”  It’s not pure “luck” which way a coin falls when you toss it: it’s actually determined by the laws of physics at play when you flip it (velocity, wind currents, and so on). The outcome, like that of our lives, are determined. Or, in some cases, not absolutely determined by the laws of physics (i.e., theoretically predictable if you had perfect knowledge) but are still absolutely produced by the laws of physics, since quantum mechanics, which so far as we know is inherently indeterministic, can affect some circumstances. But, as we know, quantum mechanics cannot support the common notion of free will: “I could have chosen other than I did.”

People will argue about this, but I don’t really want to argue about free will here; I want to make a point about determinism.  And that point is this. If you think that your genes, which partly determine your success in life, are the result of “luck” (I guess Harden means by “luck” those factors over which we have no conscious control), then so is everything else that determines your success in life.  In other words, as Harden suggests (but then dismisses) the idea that genetic “luck” is somehow physically an morally different from “environmental luck” is a bogus distinction.

The point isn’t really how we define “free will”, for all rational people are naturalists, accepting that our wills cannot change the laws of physics that really control our lives. And even if you are one of those rare libertarian free willers—who are largely religious people—I can’t see any rationale for being more concerned with genetically based inequalities than with environmentally based ones. (I note her that “environmental inequalities” can also have a genetic basis, so the distinction isn’t completely clear-cut. For example, we have evidence that there are genetic propensities to choose certain people as your friends, and your friends are immensely important in determining how you turn out.)

I applaud Harden’s motivations; who wouldn’t want to improve everybody’s chance of educational achievement? But by punting on the issue of determinism, it seems to me that Harden undercuts the whole social value of her genetic program. And because she’s a true progressive leftist, she’s more or less forced to evade that issue. But it’s fourth down and 25 yards to a first—what else can you do?