The letter that a group of us wrote to Nature, protesting Imperial College’s move to cancel Thomas Henry Huxley (they want to relocate his bust, shown below, and remove his name from a building), was of course rejected by the journal on specious grounds. (“We don’t publish petitions.”) I wrote about the issues and reproduced our full letter yesterday evening.  But the Telegraph decided to write about our letter.

The Telegraph article was posted early this morning, and you can read it for free by clicking on the link below (if this doesn’t work, just inquire).

Further, our entire letter, with signers, was also published in the letters section here (scroll down). 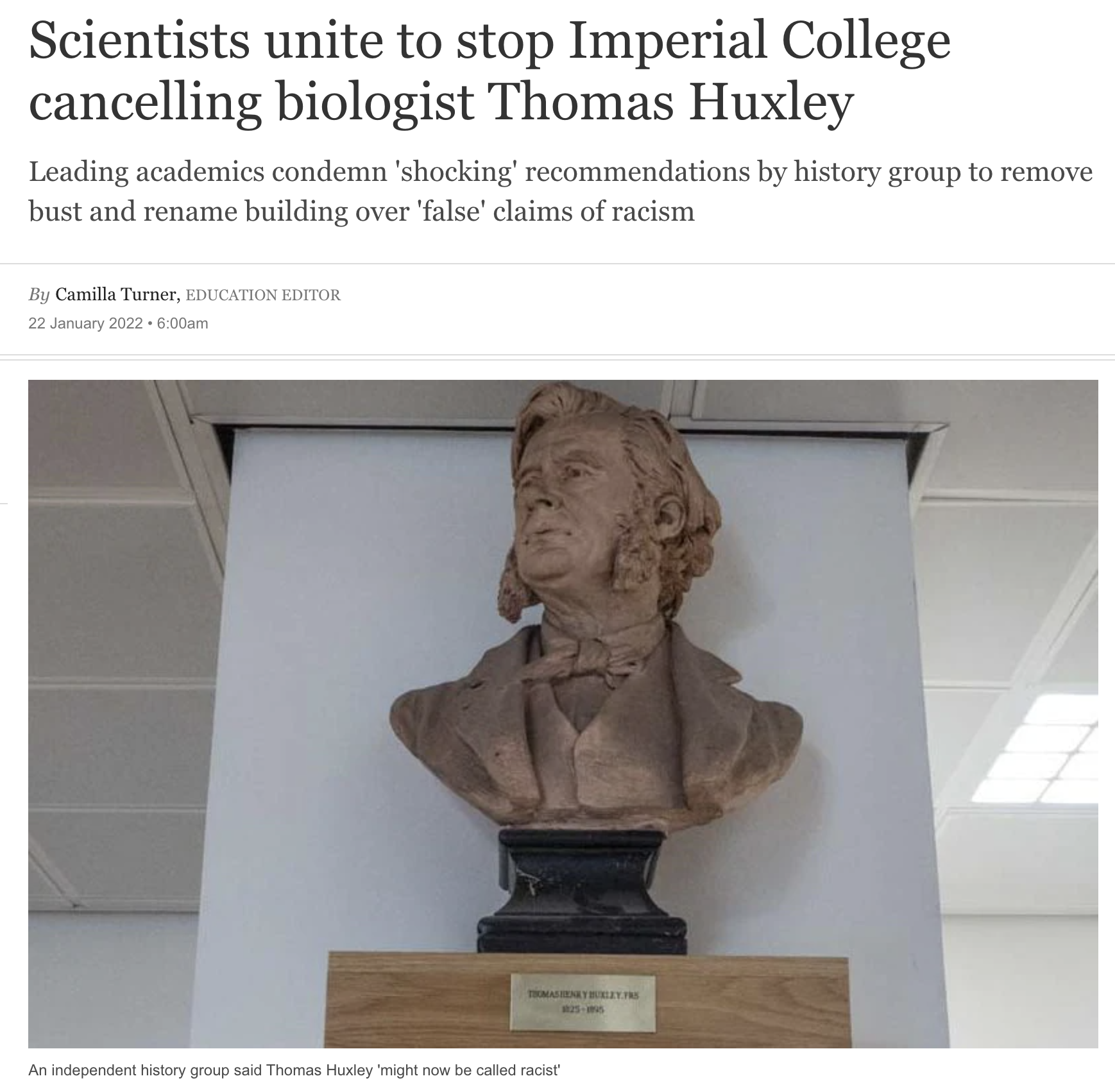 While some people were scared to death that coverage in a conservative paper would ultimately hurt our cause (i.e., the misguidedness of Imperial’s actions), it turns out that the Telegraph article is temperate, objective, and doesn’t go off about wokeness.  It could have appeared in the Guardian—that is, if the Guardian would ever consider publishing a piece on this topic.

I barely need to quote the Telegraph letter since it pretty much reproduces what our letter said, but here are a few bits and bobs:

Imperial College must not “disown” one of its founding fathers, Thomas Huxley, eminent scientists have warned as they urged the university not to remove his bust or rename a building named after him.

Several of the university’s academics have spoken out to defend the 19th-century biologist against accusations of “scientific racism” which they say are “false”.

They are backed by some of the country’s leading scientific figures, including Prof Richard Dawkins and the Nobel laureate Sir Prof Paul Nurse.

. . .Their intervention comes as Imperial College considers the recommendations of an independent history group, which it set up in the wake of the Black Lives Matter protests in 2020, to examine the university’s colonial links.

The history group advised that Huxley’s bust should be removed because he “might now be called racist” and the Huxley Building on campus renamed.

Their report, published in October, explained that while Huxley was an abolitionist he also wrote an essay which “espouses a racial hierarchy of intelligence, a belief system of ‘scientific racism’ that fed the dangerous and false ideology of eugenics”.

It went on to say that this “falls far short of Imperial’s modern values” and as such his bust be removed from display and the Huxley building renamed.

“Huxley was an ardent abolitionist who fought the virulent pro-slavery scientific racism of his day and publicly welcomed the defeat of the Confederacy in 1865,” they say.

“From childhood poverty, Huxley rose on merit to become President of the Royal Society and Privy Counsellor. ‘Darwin’s Bulldog’, he fought for the theory of evolution, and first demonstrated our evolutionary descent from an ape-like ancestor.”

The letter acknowledges that early in his career he believed in a hierarchy of races but added that “as he aged he became sceptical of racial stereotypes”.

It goes on to note that Huxley “reformed London’s schools, was a principal of a working men’s college, wrote volumes of journalism, gave lectures for working people and opened his classes to women”.

The letter says: “He was instrumental in founding the Royal College of Science, later Imperial College, the very institution that now seeks to disown him.

. . .Prof Armand Leroi, an expert in evolutionary developmental biology at Imperial College, said the recommendations produced by the history group are “frankly shocking”.

“Many members of staff were quite outraged, especially the biologists,” he said. “Huxley was such a champion of egalitarianism, of access to science, of working class education. These are all things he worked for tirelessly in his life.

“By the standards of the day he was an extraordinarily enlightened man – he fought against the racist scientists of his day who were allied with slavery ideologues in the US. He should be seen in the context and the mood of his time.”

Prof Leroi said that it is “perfectly right” for an institution to examine its own history but added that removing Huxley’s name and bust is a “knee jerk reaction”.

A spokesman for Imperial College said that its governing body – known as the president’s board – will have an update next month about its proposed course of action.

I count this as a win—not that Imperial College will leave Huxley untouched, as they probably won’t—but because it represents public pushback against the historical erasure of great figures that is part of academic wokeness. Push back, push back, against the dying of the light!

Oh, and while they’re busy with their defenestrations, shouldn’t “Imperial College” consider changing its own colonialist name?

UPDATE: I just received a link to this long but enlightening article in Quillette by Stephen Warren, a physicist at Imperial College.  Click on the screenshot to read it; it’s about Imperial’s impending cancellation of not just Huxley, but another founder named Alfred Beit:

One general quote from Warren:

The Witt committee [convened at Yale to develop principles for “renaming”] considered the problem of renaming from multiple angles. Its members researched cases of renaming at other universities and in other countries, and they examined carefully the different principles that affect the decision process. These include the fact that the purpose of a university is to discover and disseminate knowledge; that erasing a university’s history is antithetical to the spirit of the institution; that history’s memorialisation of the past serves to express values that may change over time; that change is indispensable in a university; and that the genuine inclusion of all groups is necessary to ensure that a university maintain its stature as a centre for research and teaching in years to come.

Committee members also called for input from undergraduates, staff, faculty, and alumni. The views expressed covered a wide range, but a theme emerged: “Running through many comments we received was widespread agreement that the University can and should aim to be diverse and inclusive in a way that emphasizes its traditions of excellence and does not efface the institution’s history.”

The result of this process was a set of proposed principles to follow, not only at Yale but at other institutions as well, in considering questions of renaming, with an accompanying narrative elaborating those principles. Interested readers should read the report in full to appreciate its message. But a general recommendation that emerged is that historical figures should be judged according to the times in which they lived, and that modern observers should focus on a person’s principal legacies, because no one is perfect.

The idea was to create a decision framework that itself would stand the test of time, and would not simply be brushed aside in the future. The report warned that “hubris in undoing past decisions encourages future generations to disrespect the choices of the current generation.” But the recommendations certainly do allow renaming under the right circumstances. And indeed this is what happened to Calhoun College, which is now named after Grace Murray Hopper, a Yale-trained mathematician and computer scientist who, as a US Navy officer, applied her skills to the defeat of fascism during World War II.

The Imperial History Group was fully aware of the Yale report. Unfortunately, its members chose to follow a very different set of principles.. . .

. . . . Reassessing Huxley and Beit by the light of the Yale report recommendations would be a valuable exercise, and would likely lead to different conclusions than those put forward by the History Group at Imperial College. Regardless of what is decided next month by President Gast, it is Yale’s approach, not Imperial’s, that should usefully be adopted as a sector standard in regard to future questions of renaming at other universities.