I received a long email from reader Leslie MacMillan, and I suggested that he turn it into a post for our readers. He kindly agreed. I asked him to write me a brief biography, which is below:

Leslie is a retired physician who worked as an academic clinician-teacher and in hospital practice.  Now in obscurity, he enjoys dinner with his family at a reasonable hour, playing the piano, and indulging his grandchildren.”

And here’s his contribution:

The Canadian Medical Association Journal (CMAJ, “the Journal”) has retracted a Letter to the Editor following orchestrated religious pressure that accused the Journal and the author of “Islamophobia”.

“Islamophobia” is one of those words hurled at people without a definition of what it means.  Unlike many slurs, though, this one does have a definition.  “-phobia” means “fear of”.  A phobia can be irrational or it can be well founded.  Islamophobia, then, indicates only a fear of the implications of the tenets of Islam or the intentions of its adherents.  It cannot by the fact alone be equated with hate speech or, obviously, racism.  Yet it so often is.  Sometimes speakers will say, “tantamount to hate speech”, pulling their punches and evading the implication of an accusation of an offence under the Criminal Code of Canada and some other countries.  Fear can be thought of as unease or suspicion that professed views of love and tolerance are not sincere; it is then rational to withhold trust, the trust that liberal societies need to function.  If one is accused of Islamophobia, one ought to be able to respond, “Yes, I am.  Here’s why.”

For the cover page of its 8 Nov 21 on-line issue, the Journal used this stock photo.  There was no contextual link to any one article in the issue.  It seems to have been a generic free-standing cover photo in that it appears on the sidebar for each of the articles in the issue. 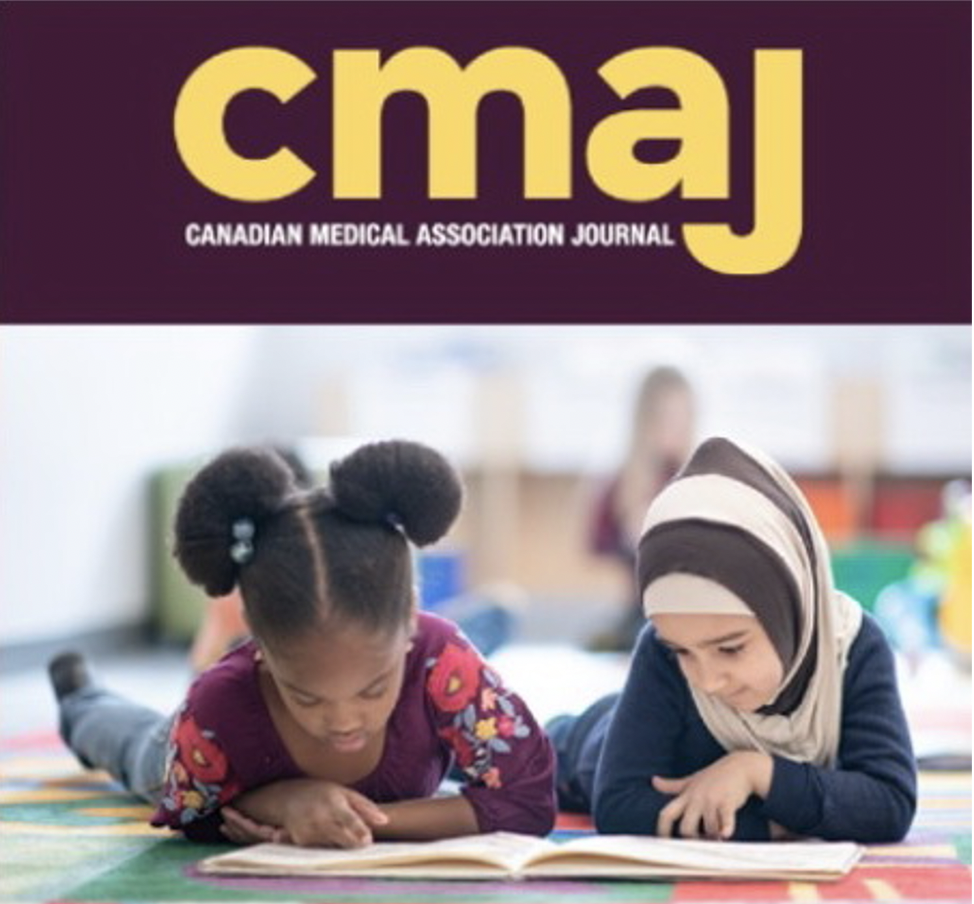 Dr. Sherif Emil, a senior academic surgeon in pediatrics at Montréal Children’s Hospital and McGill University wrote to the editor of the Journal objecting to depicting such a young child wearing a hijab.  He quoted Yasmine Mohammed, a Vancouver activist who has championed equality for Muslim women:  “The cover of @CMAJ features a little girl in hijab. How disheartening to see my so-called liberal society condone something that is only happening in the most extremist of religious homes.”   Emil then acknowledged his respect for the women he sees in his practice who wear the hijab—mothers and some adolescent patients.  He continued (direct quotations indented hereafter):

But respect does not alter the fact that the hijab, the niqab and the burka are also instruments of oppression for millions of girls and women around the world who are not allowed to make a choice. We are currently being reminded of this daily, as we see the tragic return of the Taliban in Afghanistan, and its effect on the subjugation of women and girls. Girls as old as those in the picture are being sold into marriage to old men — institutionalized child rape. The mentality that allows this to happen shares much with the one that leads to covering up a toddler. But even in so-called moderate Islamic countries, such as the one I grew up in, societal pressures heavily marginalize women who choose not to wear the hijab. In addition, women in these countries who are not Muslim and do not wear the hijab are often subject to intense harassment and discrimination. I know that because some of these women are in my family. I respect the women who see the hijab as liberating. But we must also remember the women and girls who find it oppressive and misogynistic.

Ironically, the article [which he interpreted the photo as referring to] explores evaluating interventions to address social risks to health. A young girl such as the one depicted in the image is typically also banned from riding a bike, swimming or participating in other activities that characterize a healthy childhood. She is taught from an early age, directly or indirectly, that she is a sexual object, and it is her responsibility to hide her features from the opposite sex, lest she attract them. A heavy burden for modesty is placed squarely on her shoulders.  So many women have been traumatized by such an upbringing, which, I believe, frankly borders on child abuse. Is that not a social risk to health? Are these children not a vulnerable population?

This link includes a citation to the tweet by Ms Mohammed quoted in the letter.  (Link found and posted by Retraction Watch commenter Andrew.)

The letter appeared in the Journal’s 20 Dec online issue under the heading, “Don’t use an instrument of oppression as a symbol of diversity and inclusion”, a form of words of the editor’s choosing, not the author’s.

Advocacy groups claiming to represent the interests of Muslims in Canada and Québec vigorously protested the publication of the letter and called for its retraction.  Dr. Emil received abuse personally on Twitter as well, as noted by Retraction Watch (q.v.)

The CMAJ editor responsible, Kirsten Patrick, apologized particularly for her choice of words in the heading.  The uproar, a lengthy happy-talk on why hijab is not oppressive, and the Journal’s efforts at damage control, are reported in a long CTV news article of 20 Dec from which I’ve taken a small snippet:

[Lina] El Bakir [Quebec advocacy officer for the National Council of Canadian Muslims] argues that publishing the letter was irresponsible, especially during a pandemic when doctors who wear a hijab are dealing with prejudices in their daily practice. . . .

A pre-written response to the CMAJ, included on the national council’s website as part of an online letter-writing campaign, cites a few sections in the Canadian ‘Medical Association’s Code of Ethics and Professionalism that medical professionals must adhere to.

“This article falls short of these standards,” the response states.

“We are asking CMAJ to retract this article immediately and issue a public apology before it does any further harm to a demographic that has been targeted by some of the most violent forms of Islamophobia in this country.  [Emphases mine,–LM]

The Canadian Medical Association itself, which owns and publishes the Journal, piled on with an official and gratuitous swipe at the author.

Islamophobia and other forms of hate [there’s that incorrect conflation again –L.M.] must not be tolerated in the health care profession or in our society. Like CMAJ, the Canadian Medical Association deeply regrets the harm caused by the publication of an opinion letter in CMAJ on Dec. 20, 2021.

CMAJ is operated independently of the Canadian Medical Association with its own governance structure and editorial board. While we will always uphold the editorial independence of CMAJ, we feel a responsibility to speak out and express our sincere apologies for the harm caused.

On 23 Dec., the Journal buckled to this pressure and not only retracted the letter but removed it from its website.  It made no visible effort to send the commentary to the author, publish some of it, and invite a response before doing so.  Click on the screenshot or read the text below. 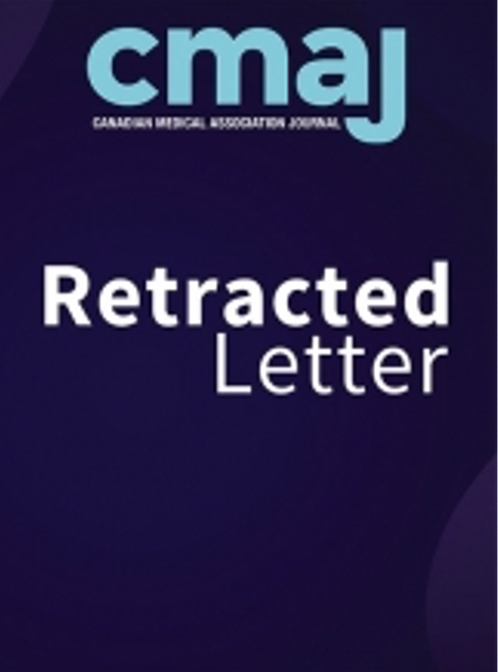 The letter “Don’t use an instrument of oppression as a symbol of diversity and inclusion” (DOI: https://doi.org/10.1503/cmaj.80742; author: Sherif Emil)1 published in the Dec. 20, 2021, issue of CMAJ has been retracted by the interim editor-in-chief of CMAJ because the editorial process for the article was flawed and biased, and the letter should not have been published.

CMAJ acknowledges and is deeply sorry for the considerable hurt that many people across Canada have experienced from reading this letter. A formal apology from the interim editor-in-chief has been published at https://www.cmaj.ca/content/193/51/E1935.

Retraction Watch criticized the removal, contrary to guidelines from the Committee on Publication Ethics, which recommended marking it as retracted (as the PubMed copy is)

The author of the letter has posted his own conciliatory statement at the Canadian Healthcare Network here.

Tabassum Wyne, executive director of the Muslim Advisory Council of Canada, [said] she was glad the CMAJ “took the necessary steps to correct that mistake” and hear from diverse voices. . . .The council had a virtual meeting with the CMAJ’s interim editor-in-chief, Wyne said, during which it was suggested that the journal look at anti-Islamophobia training in the future.

Wyne also expressed concerns about having anyone on the internet read the letter in an accredited journal.   “And that’s why we pushed so hard to have it retracted, and we’re happy with the results.”

It gets worse.  The CMAJ editorial group “seeks to remedy” the current lack of Islamic representation on its Editorial Advisory Board.  The Muslim advocacy organizations clearly seek to exercise prior restraint instead of merely complaining about it afterward.

The National Council of Canadian Muslims has since thanked the CMAJ for removing the letter, saying it appreciates “the efforts of the editor in chief for taking action and doing the right thing” and looks forward to working with her to “ensure this never happens again.”

(This CTVnews article misleadingly shows a photo of someone protesting Québec’s  laïcité law, la Loi 21.  This affair has nothing to do with that law and the author says he disagrees with it anyway.)

If the CMAJ follows through on this, there will be religious oversight of what an academic medical journal is permitted to publish.

I have written the CMAJ and the CMA criticizing them for their lack of integrity in this episode. I encourage readers, particularly Canadian physicians, to do the same, even if you are not members of the CMA (as I am not), and even if you would not have published the letter in the first place were you the editor.  The Journal has received comments from readers mostly criticizing the decision to retract and censor —see the retraction e-letters link below—but I don’t see awareness of the undertaking to invite Muslim advocates to exercise prior restraint on publication.  This hidden censorship is especially dangerous.  I recommend that letters specifically call this out so the CMAJ knows you are watching.

This site refers to the retraction announcement, not the original letter. You can submit e-letters there.

At this site you can contact the Canadian Medical Association.

John Locke argued that it is better for a society to be governed around religious tolerance because this would lead to less social disorder than for the state to enforce adherence to one religion and, necessarily, to suppress all others.  This works only if the religions themselves are compelled by secular laws to tolerate people who reject or even mock their every teaching—otherwise you have a state religion sneaking in the back door under the guise of stamping out (in this case) Islamophobia.

Growing up in secular Canada, I was always glad that believers could enjoy their freedom of religion but was even gladder that I enjoyed my freedom from religion.  Religious differences just never came up in ordinary or professional life.  The idea that someone should be enjoined from doing something because it offended someone else’s religious views, and that could be called “harm”, was unthinkable.  Increasingly it looks as if we risk losing this freedom out of fearful acquiescence of our institutions to intolerant and censorious religious pressure.  Islamophobia (my correct definition) afflicts them, too, and they don’t even notice it.  It’s up to us to open their eyes.

20 thoughts on “Guest post: Censorship at a Canadian Medical Journal”