Once again we see the New York Times printing an article that, it says, “bolsters a claim” from the Bible. The claim? The bit in Exodus 3 where Yahweh appears to Moses in the form of a burning bush, telling him that he will set the Jews free from bondage in Egypt. King James version:

3 Now Moses kept the flock of Jethro his father in law, the priest of Midian: and he led the flock to the backside of the desert, and came to the mountain of God, even to Horeb.

2 And the angel of the Lord appeared unto him in a flame of fire out of the midst of a bush: and he looked, and, behold, the bush burned with fire, and the bush was not consumed.

3 And Moses said, I will now turn aside, and see this great sight, why the bush is not burnt.

4 And when the Lord saw that he turned aside to see, God called unto him out of the midst of the bush, and said, Moses, Moses. And he said, Here am I.

5 And he said, Draw not nigh hither: put off thy shoes from off thy feet, for the place whereon thou standest is holy ground.

6 Moreover he said, I am the God of thy father, the God of Abraham, the God of Isaac, and the God of Jacob. And Moses hid his face; for he was afraid to look upon God.

7 And the Lord said, I have surely seen the affliction of my people which are in Egypt, and have heard their cry by reason of their taskmasters; for I know their sorrows;

9 Now therefore, behold, the cry of the children of Israel is come unto me: and I have also seen the oppression wherewith the Egyptians oppress them.

10 Come now therefore, and I will send thee unto Pharaoh, that thou mayest bring forth my people the children of Israel out of Egypt.

According to the Times, people have been trying to follow up on this for centuries, most notably looking for the mountain where this all occurred. But how would you know? No bush would be alive after all these millennia, and the Tablets would have long since become pebbles. The NYT, however, gives a clue of what Moses might have seen. The funny but sad part is that it’s not a bush at all, but a cave that gets lit up by sunlight on the day of the winter solstice.

Here’s the article, which poses three questions in a way that they could have been answered “yes”. In fact, by saying the new data “bolster the claim” of Moses and the burning bush, they’re implicitly answering “yes”. (Click on screenshot to read.) 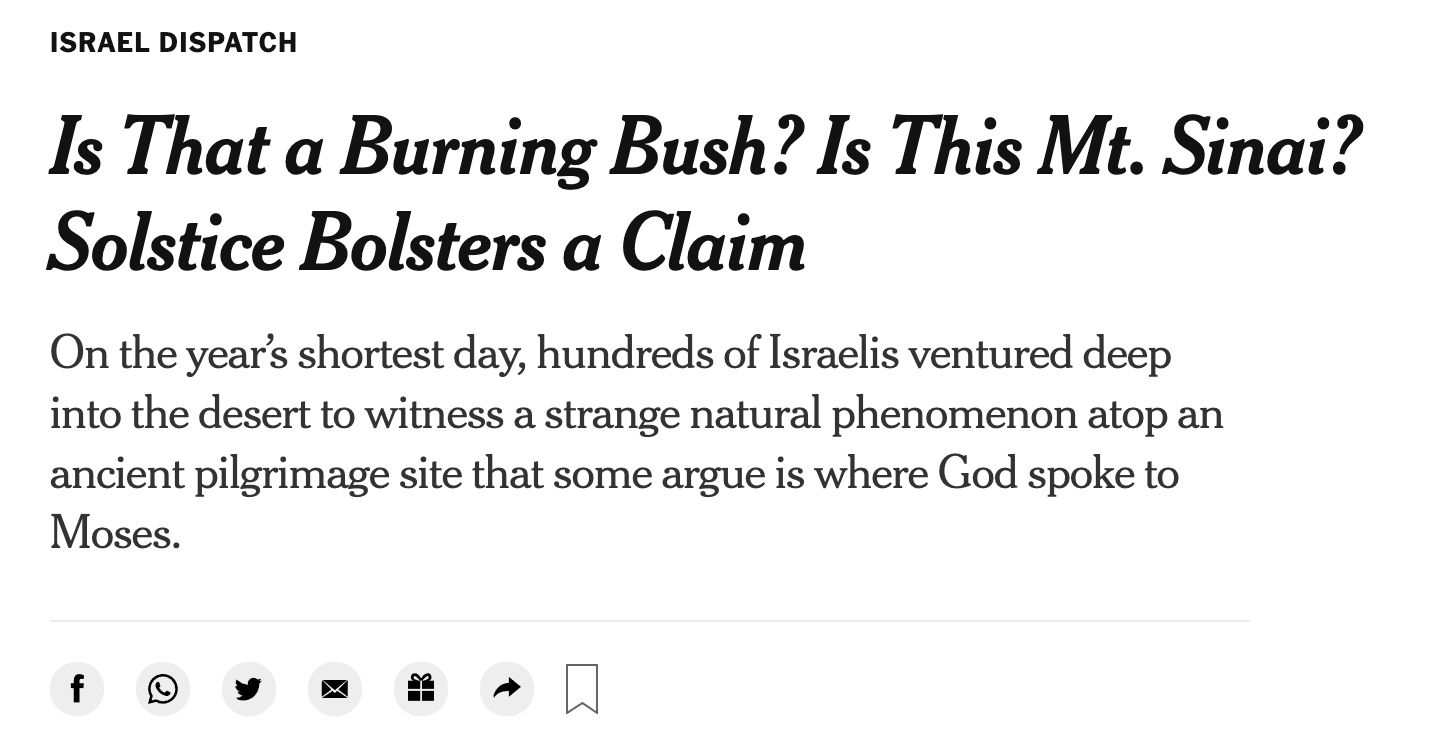 Before I go further, the Biblical scholar Francesca Stavrakopoulou (Professor of Hebrew Bible and Ancient Religion at the University of Exeter and a popular writer) answers the questions in a terse five words.

Is That a Burning Bush? Is This Mt. Sinai? Solstice Bolsters a Claim – The New York Times https://t.co/ykcY0lmZV7 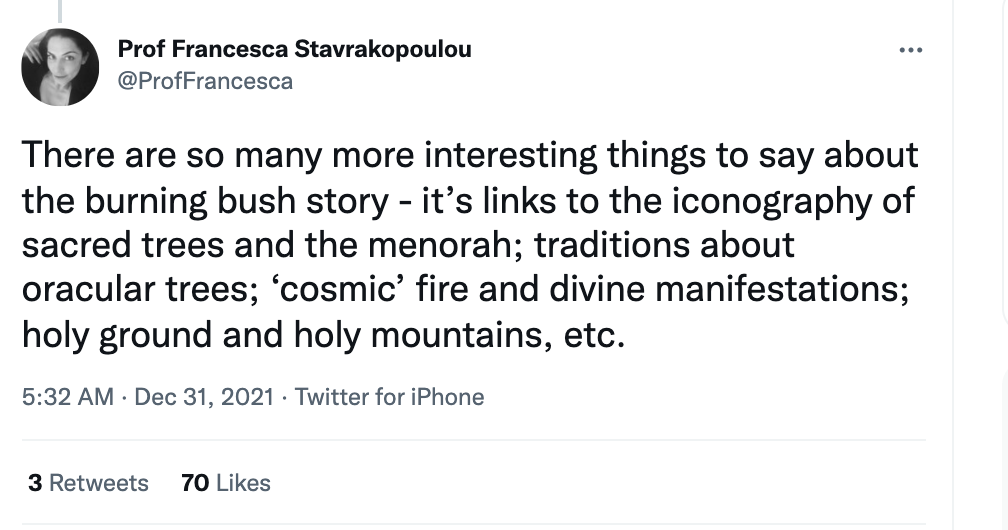 So for years people have been looking for Mount Sinai, the reputed site of the burning bush and proffering of the Ten Commandments. Many mountains have been the subject of this clam.  Now, however, the Bible-believers are turning to Mount Karkom in Israel’s Negev Desert. That’s because, in 2003, a guide happened to be there on the Winter Solstice and saw this:

A closer view of sunlight reflecting off the walls of the cave:

Yes, the Sun’s angle is such that it lights up the cave entrance on that one day. This of course isn’t a new type of phenomenon: lots of ancient people built structures to help determine when the solstices occurred.

The tsunami of credulousness began:

It was sunlight reflected at a particular angle off the sides of a cave, but the discovery soon made its way to Israeli television and was fancifully named “the burning bush.” Perhaps this, some said, was the supernatural fire that, according to the Book of Exodus, Moses saw on the holy mountain when God first spoke to him, and where he would later receive the Ten Commandments as he led the Israelites out of Egypt.

The burning bush, never consumed by the fire, is symbolic in Judaism, Christianity, Islam and other faiths including Baha’i.

But decades before this accidental astronomical discovery, Mount Karkom was already captivating some archaeologists with hints that the site had played an important spiritual role thousands of years ago.

Yes, there are petroglyphs there, too: signs of ancient inhabitants, along with burial sites nearby and migration trails. (The mountain was rich with flint—useful hard stones at a time when there was no metal.) The date-able sites are around the third millennium BCE.

But is a lit-up cave entrance justification for the Biblical story? Of course not! At best, it gives a clue to what might have inspired the Biblical story, but that clue isn’t very convincing. Worse, there’s not a smidgen of evidence for the basis of the whole story: the captivity of the Jews in Egypt and their subsequent Exodus, when, apparently without any GPSs, the Israelites wandered for forty years before settling down. But all that the article says about the Exodus is this:

If it happened? Could the paper possibly have apprised us that there’s no evidence for such an exodus?

But never mind: people who believe that the Bible is true are hell-bent on finding evidence, even though they claim that their beliefs aren’t based on evidence. And so, on weekends, the Israeli Army allows thousands of people to see the site, which of course is packed during the Winter solstice. (Because the area is a few miles from Egypt, and lies on an Israeli Army firing and training area, and because of the danger of terrorist attacks, access is limited): 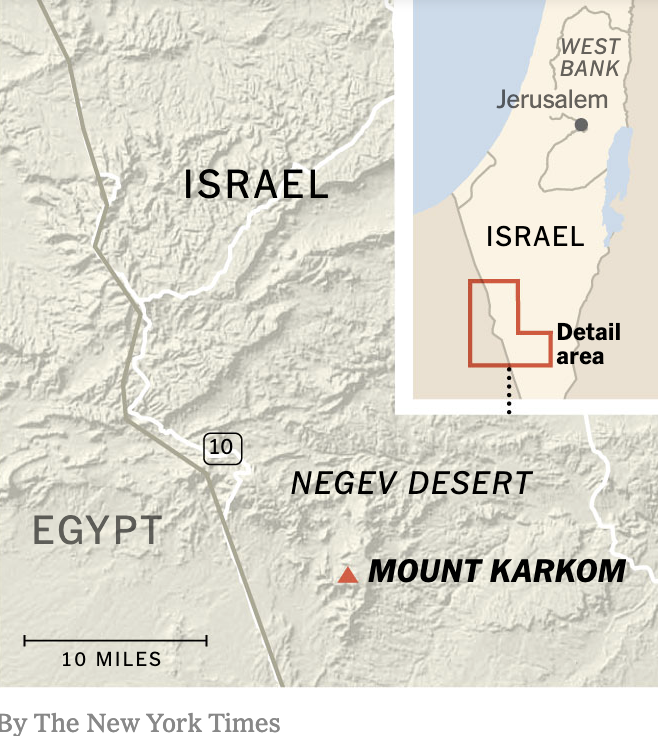 So, on Solstice Day, the crowds pack in, Christians, Muslims and Jews all seeking evidence that there was some empirical basis for Moses’s “burning bush” story. There are also helicopter flights.

At the end, there’s just one smidgen of doubt expressed by Shahar Silo, “a researcher who manages the Negev Highlands Tourism cooperative”:

Whether this is Mount Sinai and the winter solstice phenomenon the burning bush “is in the eye of the beholder,” Mr. Shilo said.

Meh; no greater than the myth of Peter Pan or Paul Bunyan.

Dr. Stavrokopoulou was right: it’s a big pile of “nopes.” Religion not only poisons everything, but dupes nearly everybody. And I claim once again that religious faith rests on certain factual assertions, which believers seek to confirm to buttress that faith. When confirmation fails, they revert to the familiar and misleading mantra: “The Bible is not a textbook of science.” Our faith isn’t based on “scientific” evidence.

It doesn’t help that the New York Times, with its penchant for touting woo, runs a puffball piece on The Bush That Was Really A Cave.