Just a bit of fun, but the headline below is true. The survey on which it’s based is reported in this article in from the Independent, which you can see by clicking on the screenshot:(you can register for free with email and a password if it’s blocked; there’s no paywall)

So, here are some results given in the article:

More than half of Americans believe “Arabic numerals” – the standard symbols used across much of the world to denote numbers – should not be taught in school, according to a survey.

Fifty-six per cent of people say the numerals should not be part of the curriculum for US pupils, according to research designed to explore the bias and prejudice of poll respondents.

The digits 0, 1, 2, 3, 4, 5, 6, 7, 8 and 9 are referred to as Arabic numerals. The system was first developed by Indian mathematicians before spreading through the Arab world to Europe and becoming popularised around the globe.

A survey by Civic Science, an American market research company, asked 3,624 respondents: “Should schools in America teach Arabic numerals as part of their curriculum?” The poll did not explain what the term “Arabic numerals” meant.

Some 2,020 people answered “no”. Twenty-nine per cent of respondents said the numerals should be taught in US schools, and 15 per cent had no opinion.

John Dick, who happens to be the head of Civic Science, issued this tweet with the data in graphic form, which I’ve put below as well:

Ladies and Gentlemen: The saddest and funniest testament to American bigotry we've ever seen in our data. pic.twitter.com/Bh3FBsl8sR

Now Dick thinks this is an example of bigotry—”Islamophobia,” I suppose. I’m not so sure. Although I am sure that many of us know that Arabic numerals are the numerals we use every day, some people don’t, and, this being America, it’s possible that nobody has told children that they are learning “Arabic numerals.” The 56% figure could thus represent ignorance rather than bigotry, although both could play a role.  But Dick seems wedded to the latter explanation. Regardless, if it is ignorance, it’s pretty appalling. After all, everyone knows what Roman numerals are! 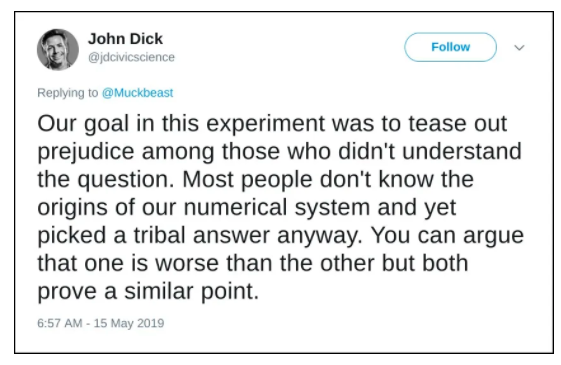 But wait! There’s more. There was so much doubt about this survey’s results that Snopes had to investigate it.

In its headline Snopes says “It’s difficult to answer survey questions if you don’t fully understand the meaning.” I’m pretty sure, from following them, that Snopes is woke,but their assumption that there’s no anti-Arabic bigotry involved is just a guess.

You can read their analysis, in which they reluctantly admit that the claim is true, by clicking on the screenshot below. 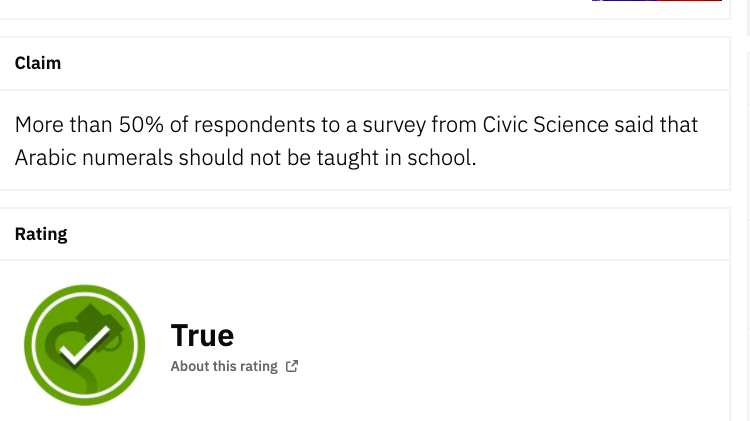 But wait! There’s still more! You get this special grapefruit-cutting knife if you read on—for free!

The full survey doesn’t appear to be available at this time (we reached out to Civic Science for more information), but Dick has posted a few other questions from the poll, as well as some information regarding the purpose of the survey.

Dick, who said that the “goal in this experiment was to tease out prejudice among those who didn’t understand the question,” shared another survey question about what should or shouldn’t be taught in American schools. This time, the survey found that 53% of respondents (and 73% of Democrats) thought that schools in America shouldn’t teach the “creation theory of Catholic priest Georges Lemaitre” as part of their science curriculum. Here are the results: 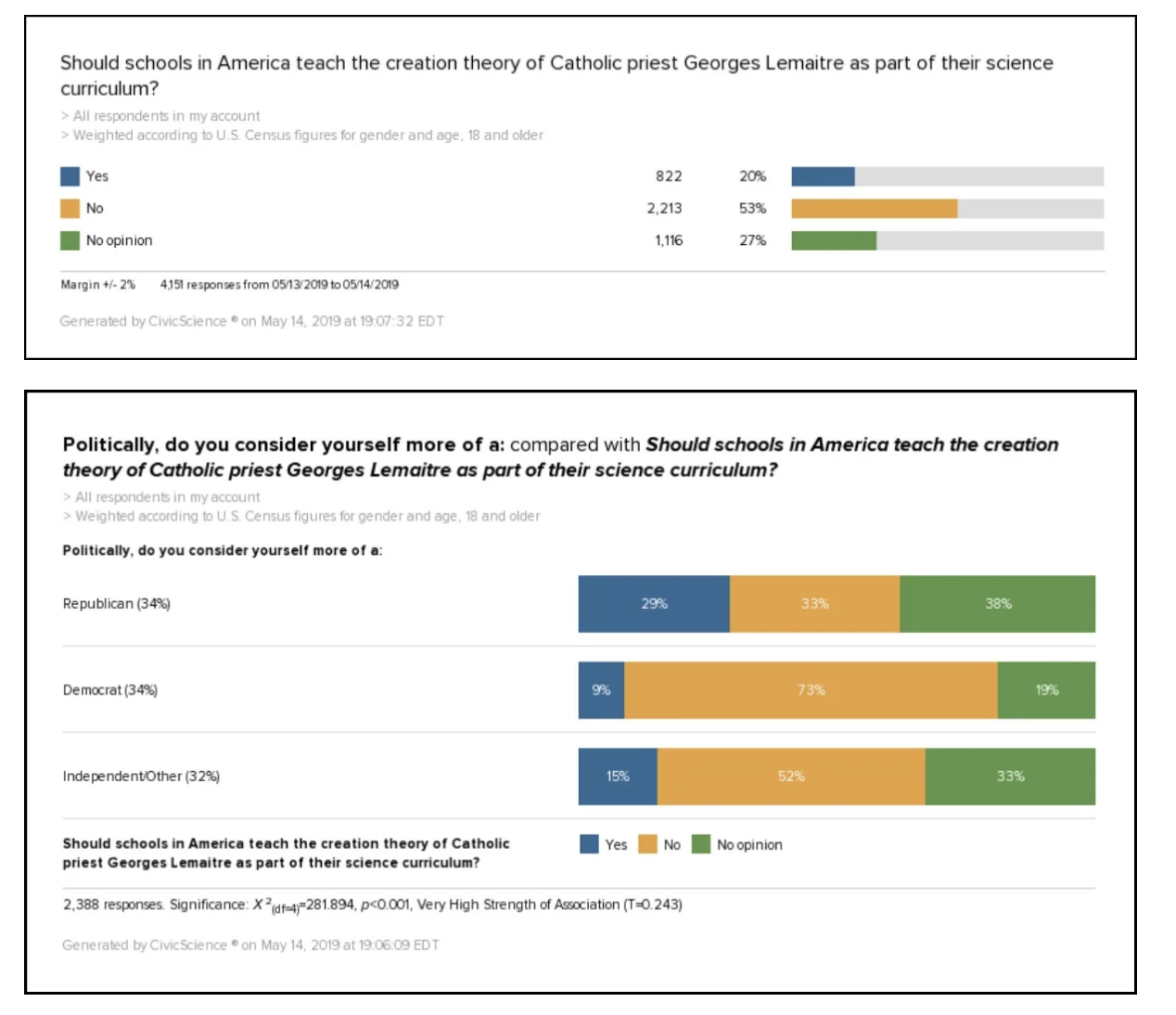 33% of Republicans, a whopping 73% of Democrats, and 52% of independents thought that Lemaître’s theory should NOT be taught.

Now this question is more unfair, because, really, how many Americans know what the “creation theory of Georges Lemaître” was? If you read about science and religion, or have followed this site for a while, you’ll know that, although he was a Catholic priest, Lemaître held pretty much the modern theory of the Big Bang and the expanding Universe. As Wikipedia notes:

Lemaître was the first to theorize that the recession of nearby galaxies can be explained by an expanding universe, which was observationally confirmed soon afterwards by Edwin Hubble. He first derived “Hubble’s law”, now called the Hubble–Lemaître law by the IAU, and published the first estimation of the Hubble constant in 1927, two years before Hubble’s article. Lemaître also proposed the “Big Bang theory” of the origin of the universe, calling it the “hypothesis of the primeval atom”, and later calling it “the beginning of the world”.

Yes, and Lemaitre did other science, including analyzing cosmology using Einstein’s theories of relativity. He was a smart dude, and should have gone into physics instead of the priesthood. There’s a photo of him with Einstein below.

Why did so many people answer that Lemaître’s theory, which is, as I said, is pretty much the current theory of the Universe’s origin, NOT be taught? Surely it’s because the question identified Lemaître as a “Catholic priest”. That means that people probably thought his “theory” was the one expounded in Genesis chapters 1 and 2—God’s creation. So they didn’t want a religious theory taught in school.

Two points: most Republicans didn’t mind as much as Democrats of Independents, and that may be because more Republicans are creationists than are Democrats. But why did so many Democrats not want Lemaître’s theory taught? Are they that much less creationist than are Republicans? Perhaps that’s one answer. Another is that they are more anti-Catholic, but that seems less likely. But underlying these data—as perhaps underlying much of the data about Arabic numerals—is simple ignorance. I, for one, wouldn’t expect the average Joe or Jill (oops!) to know what Lemaître said.

One final remark: Accommodationists sometimes use the fact that Lemaître got it right as evidence that there’s no conflict between science and religion. I’m not sure if Lemaître thought God created the Universe, but if he did, he might have thought that the Big Bang was God’s way of doing it. (He was surely NOT a Biblical literalist). So yes, religious people can and have made big contributions to science. But that doesn’t mean that religion and science are compatible—any more than Francis Collins’s biological work shows that science and Evangelical Christianity are compatible. I’ve explained what I mean by “compatible” before, and it’s NOT that religious people can’t do science.

In the case of Lemaître, Francis Collins, or other religious scientists, they are victims of a form of unconscious cognitive dissonance: accepting some truth statements based on the toolkit of science, and other truth statements based on the inferior “way of knowing” of faith. And that is the true incompatibility: the different ways that we determine scientific truth as opposed to religious “truth.”

But I digress, and so shall stop. 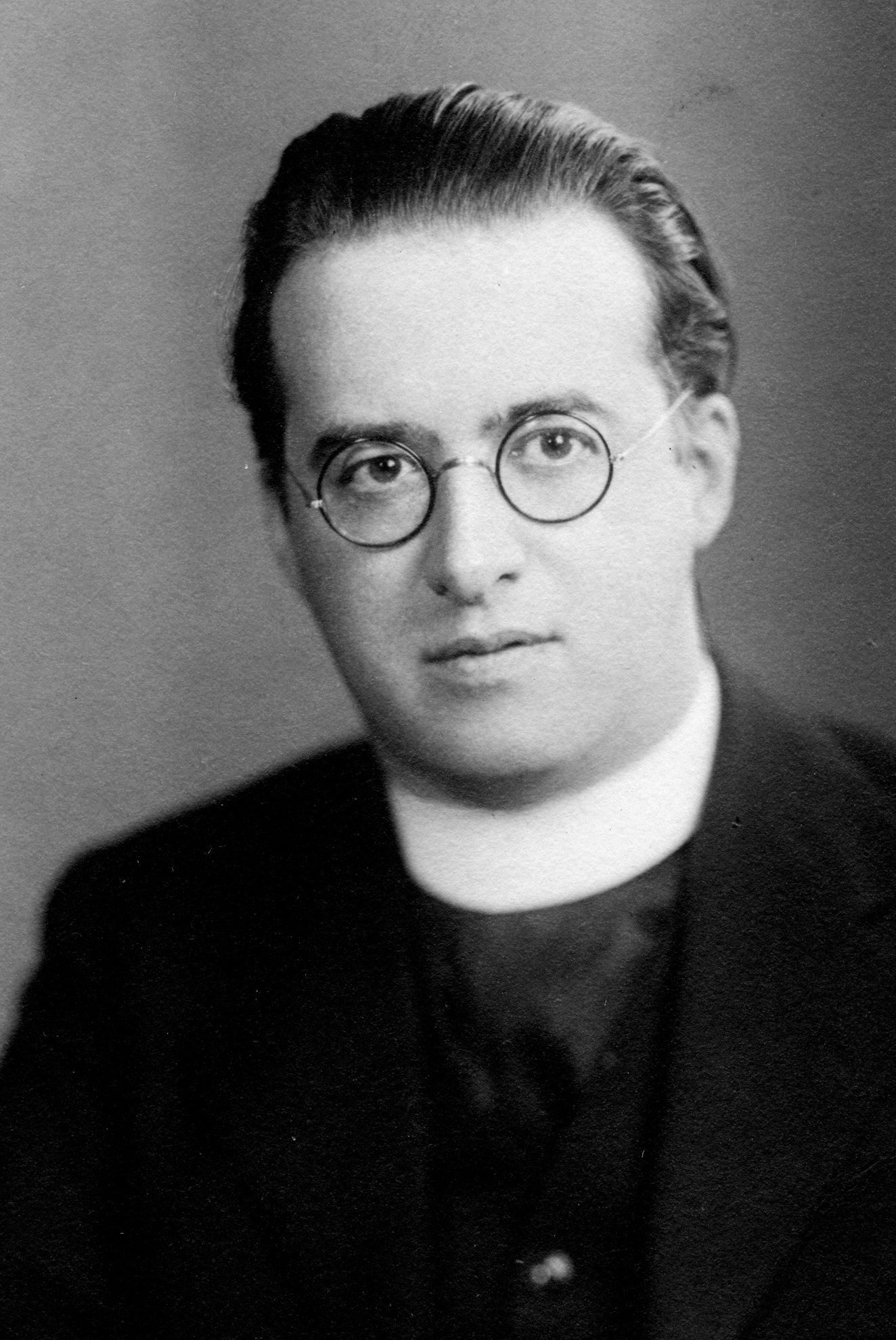 132 thoughts on “More than half of Americans oppose the use of Arabic numerals!”