I feel bad for this man and his wife, but there’s a strong dose of irony in this story from USA Today (click on title below to read):

Keith Smith, whose wife had gone to court to have his COVID-19 infection treated with ivermectin, died Sunday evening, a week after he received his first dose of the controversial drug.

Smith was in a hospital in Pennsylvania for nearly three weeks and had been in the hospital’s intensive care unit in a medically induced coma on a ventilator since Nov. 21. He had been diagnosed with the virus on Nov. 10.

His wife of 24 years, Darla, had gone to court to compel the hospital, UPMC Memorial, to treat her husband with ivermectin, an anti-parasitic drug that has not been approved for treatment of COVID-19.

York County Court Judge Clyde Vedder’s Dec. 3 decision did not compel the hospital to treat Keith with the drug, but it did allow Darla to have an independent physician administer it. He received two doses before Keith’s condition grew worse, and the doctor halted the treatment. . .

. . .Darla sued UPMC to treat her husband with ivermectin after reading about similar cases throughout the country, all filed by an attorney in Buffalo, N.Y. She was assisted by a group called Front Line COVID-19 Critical Care Alliance, which promotes the use of ivermectin in the treatment of the virus.

He received his first dose on Dec. 5, two days after Vedder’s decision in the court case. After Keith received a second dose, the doctor overseeing the drug’s administration – a physician not affiliated with UPMC – ended the treatment as Keith’s condition deteriorated.

Here’s a photo of Keith and Darla; note the caption (click photo to enlarge): 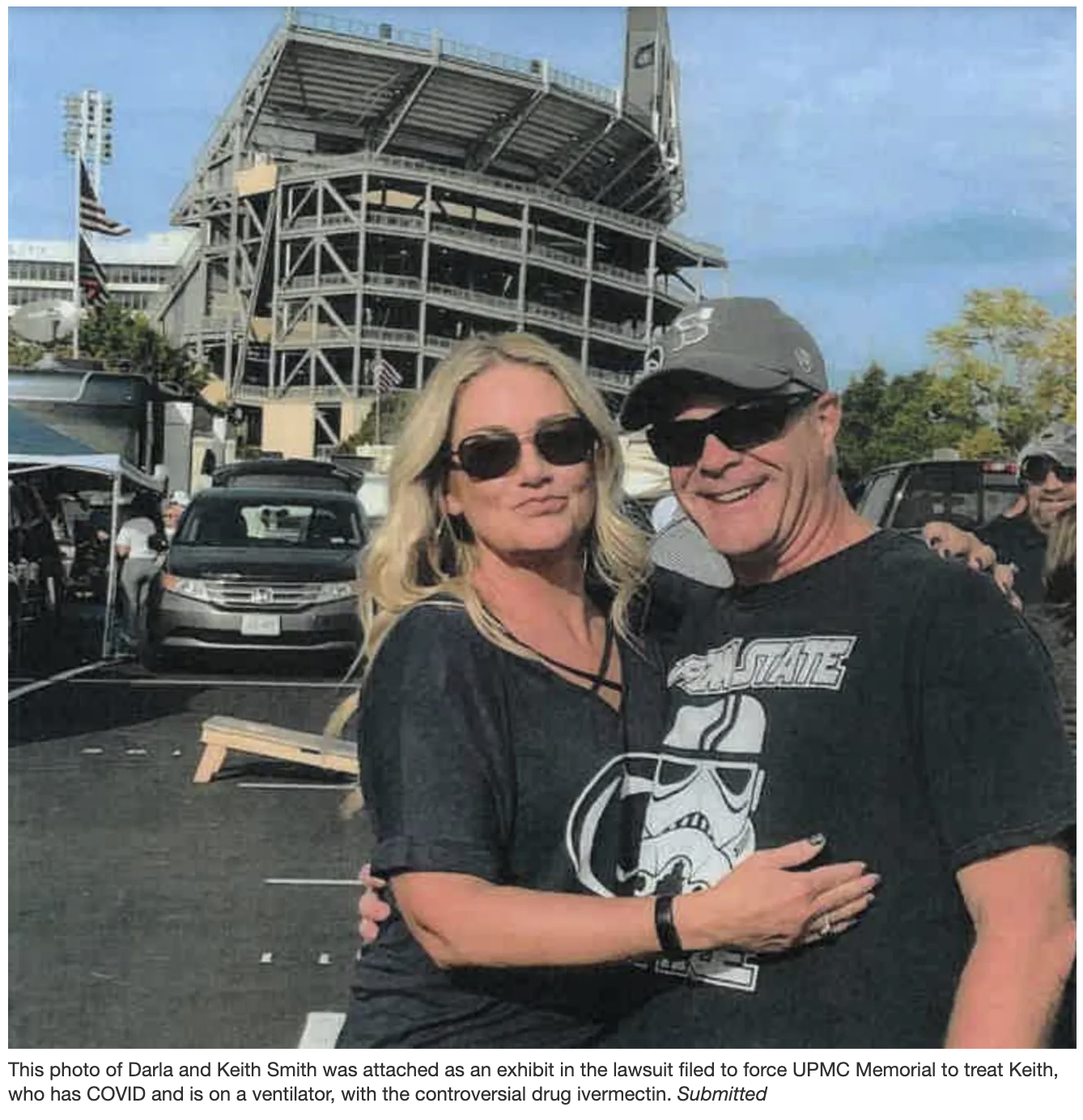 Now there may have been nothing that would save this man once he was infected, and, after all, this is only one anecdote, not a disproof of the claim (made, among others, by Bret Weinstein and Heather Heying) that ivermectin is an efficacious preventive and cure for Covid-19. But I point out that we still have no good evidence that ivermectin can do either of these things, while we have strong evidence not only for the efficacy of vaccination (particularly with a booster), and now also for the new Prizer antiviral pill, which, if given within three days of the onset of symptoms, reduces the risk of hospitalization and death by 89%.  Even if ivermectin proves to have a marginal effect (and, given the studies, that’s the most it could have), it’s no match for existing treatments.

To see a summary of the “evidence”, read this short piece in Stat, a site for health and health-and-business related news (click on screenshot):

As I’ve already pointed out, many past studies purporting to show an effect of ivermectin were fatally flawed in different ways, including cases of apparent data-faking as well as post facto analysis without proper controls. Here’s a summary of the article above:

Where to look for higher quality data? A group called the Cochrane Collaboration spends its time conducting meta-analyses of the best-conducted clinical trials. After excluding dozens of ivermectin studies with “high risk of bias,” the collaboration left little room for optimism: “Based on the current very low- to low-certainty evidence, we are uncertain about the efficacy and safety of ivermectin used to treat or prevent Covid-19.” The group recommended that ivermectin use be restricted to clinical trials that might actually generate high quality data.

The World Health Organization and the Infectious Diseases Society of America concur. Even Merck, an ivermectin manufacturer, avers that there is “no meaningful evidence for clinical activity or efficacy in patients with Covid-19.” And just last weekend the FDA warned people not to use the drug as a treatment for Covid-19.

An FDA tweet. (Note: yes, people, I know that ivermectin has valid uses in humans for eliminating lice and parasites, so don’t bother to correct me. We’re talking about viruses here.)

Note that Stat reports that a properly designed study is in progress (my emphasis below).

Yet ivermectin boosters and merchants have convinced many to use this therapy for Covid-19, particularly in Latin America where its use is so widespread that researchers have had difficulty recruiting patients for trials of other potentially effective products. In June, YouTube suspended the account of Sen. Ron Johnson (R-Wis.), a member of the Senate Homeland Security and Governmental Affairs Committee, for a week for spreading misinformation about ivermectin and hydroxychloroquine.

I’ve also criticized Weinstein and Heying, who work in my own field, for not only denigrating vaccines, but pushing ivermectin. Those who heeded their advice have been put in danger.

The increased demand for the drug, combined with enhanced scrutiny from pharmacists, has caused shortages of veterinary formulations of the drug. Inevitably, a spike in calls to Poison Control Centers connected to the use of veterinary ivermectin has followed.

And the money paragraph:

The University of Oxford’s rigorously designed PRINCIPLE trial is now trying to determine if ivermectin actually benefits people with Covid-19. But until those results come in, I urge people to heed the lessons of hydroxychloroquine, bleach, and all the other purported Covid-19 cures: effective treatments will be identified through systematic scientific study, not by wishful thinking, fabrication, or miracles.

Remember the Hippocratic Oath’s dictum: “First, do no harm.”

If the Oxford study shows ivermectin has appreciable value in preventing or curing Covid-19, I will admit that I was wrong, though I reserve the right to judge whether such an effect is sufficiently strong to make the drug more valuable than current treatments.

Likewise, if the Oxford study shows very low or no value of ivermectin in preventing or curing Covid-19, I expect that Weinstein and Heying will issue a statement saying, “We were wrong. We may have put people in danger.”

But I can already say with assurance that anybody following their advice, dosing themselves with ivermectin and avoiding vaccination, is doing precisely the wrong thing.

52 thoughts on “More about ivermectin!”