I can’t remember how I found this article at the American Institute for Economic Research (if a reader told me, apologies for forgetting); I suspect it’s a conservative site but I’m not going to check. I did check on the author of the piece, Phillip Magness, who is an economic historian and Education director at the Institute. The article below also describes his work:

Magness’s work encompasses the economic history of the United States and Atlantic world, with specializations in the economic dimensions of slavery and racial discrimination, the history of taxation, and measurements of economic inequality over time. He also maintains active research interest in higher education policy and the history of economic thought. In addition to his scholarship, Magness’s popular writings have appeared in numerous venues including the Wall Street Journal, the New York Times, Newsweek, Politico, Reason, National Review, and the Chronicle of Higher Education.

His website shows he’s written a number of books, including one called The 1619 Project: A Critique, which shows you that he’s no fan of the New York Times Initiative. And here’s a screenshot of his book’s contents: Amazon: 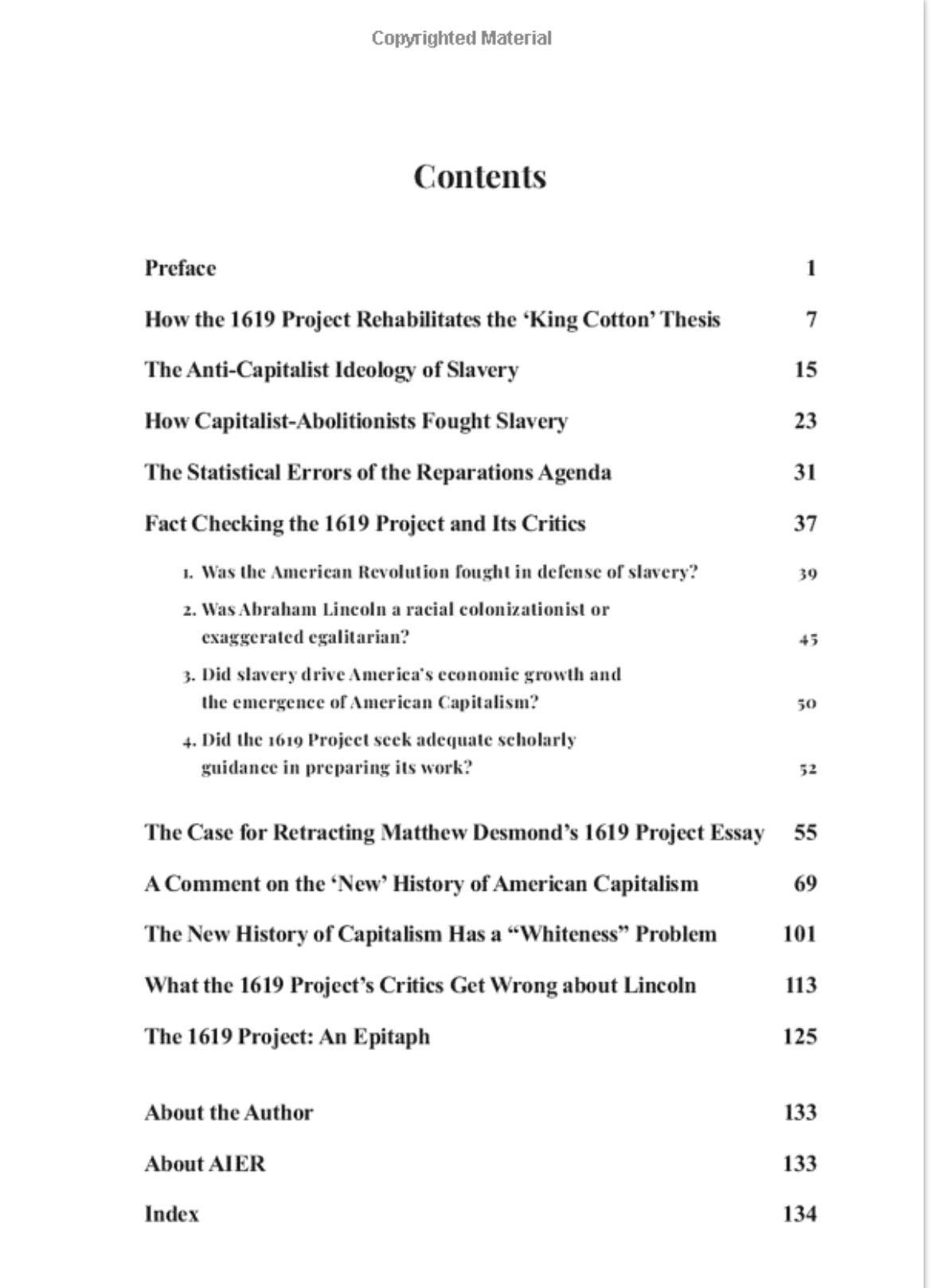 The book gets 4.5 stars out of 5 on Amazon, with 793 ratings, but I’ll discount those because those might come from people who object to the 1619 Project on principle because it calls attention to oppression. (I’m trying here to avoid being overly critical of the 1619 Project despite its publicly-revealed problems—some revealed by Magness—because the project’s intentions were generally good. I don’t recommend its curriculum being taught in schools because of the historical inaccuracies, nor do I approve of a woke newspaper using its power to indoctrinate schoolchildren—but past teaching about the history of African Americans, at least when I was a kid, was woefully deficient, and I hope that the Project calls attention to any remaining wrong impressions that need to be righted.

At any rate, what is Magness’s problem? In this article, it’s that Nikole Hannah-Smith, the Pulitzer-Prize-winning instigator of the 1619 Project, used Magness’s own research on slavery extensively to support her thesis, but then deep-sixed his findings and used other sources when she found that Magness was highly critical of other aspects of the Project. The article does have a whiff of sour grapes, but it also reveals the mess that the 1619 Project has become, and the unprofessional way that Hannah-Jones behaves, including ad hominem questioning of historical credentials when someone disagrees with her.

The stuff that Hannah-Jones used in the 1619 Project from Magness was his finding that even up to his assassination, Lincoln was looking for a way to export black people (slaves, I presume) to other countries. This was not done as a “Final Solution,” but as a way to remove blacks from the hate and oppression that they’d encounter in the U.S. I suppose Hannah-Jones likes this idea because it seems to knock Lincoln down as “The Great Emancipator”, buttressing the 1619 Project’s initial claim that African-American progress in the U.S. barely depended on white people.

Here’s what Magness says, and it’s not at all flattering towards Lincoln:

Reality is much more straightforward. In addition to being a sincere antislavery man, Lincoln was also a sincere colonizationist who meant what he said when he espoused this position. A substantial body of my own work on the Civil War era investigates this exact question, conclusively showing that Lincoln continued to pursue colonization schemes through diplomatic channels well beyond the Emancipation Proclamation, and likely into the last months of his presidency. When Nikole Hannah-Jones made similar claims in 2019, she was drawing directly on my work as a historian of that subject.

In fact, Hannah-Jones stated as much in a series of now-deleted comments as some of the other historian-critics questioned her claims about Lincoln and colonization.

There were certain interpretive differences between my work and the 1619 Project on this point – for example, Hannah-Jones understated the extent to which antislavery motives shaped Lincoln’s support for the measure, which he saw as a pathway to wean the country away from the brutal plantation system. But the historical evidence of Lincoln’s deep connections to colonization was clear, and at least on that point the 1619 Project got it right.

That is, until Hannah-Jones realized that the historian she was citing was also an outspoken critic of other aspects of the 1619 Project.

“What are the credentials, exactly of Phil Magness?” Hannah-Jones fumed in another now-deleted comment after she realized that I had offered a less-than-favorable assessment of her project’s other historical claims, and particularly its error-riddled essay on the economics of slavery by Matthew Desmond. Her fury intensified in January 2020 after Alex Lichtenstein published a lengthy defense of the 1619 Project against his historian critics, attempting to invoke his authority as the editor of the American Historical Review to arbitrate the disputes over its claims about slavery in the Revolutionary through Civil War eras. At the time I pointed out that Lichtenstein – a 20th century historian – was not an expert in the antebellum United States, and was thus not qualified to assume the role of historical judge and jury on specialist claims about that era. Hannah-Jones snapped back, “Lol. You aren’t a specialist in that era either yet that didn’t stop you.”

Setting aside the fact that only a few weeks prior Hannah-Jones herself had been explicitly touting my work on Lincoln’s colonization projects to justify her own claims in the 1619 Project, I’ll simply note that I’ve authored over two dozen scholarly works on slavery and the Civil War era. This includes my aforementioned book, the chapter on colonization in the Essential Civil War Curriculum, as well as multiple peer-reviewed articles on slavery in the U.S. and broader Atlantic world. Hannah-Jones, by contrast, has no known original scholarship to her name of any kind on slavery or this period of American history.

This is more or less academic gossip, but it does show that the academic underpinnings of the 1619 Project, at least insofar as how its director deals with actual historical data, are shaky, especially when she doesn’t argue the data (she just deletes tweets), but questions credentials. That’s not the way to argue, particularly because professional historians with more training and accomplishment than Hannah-Jones have taken issue with important conclusions of the 1619 Project. Those she dismisses because the criticism is from white people:

When James McPherson offered his own less-than-flattering take on Hannah-Jones’s work in November 2019, she responded dismissively: “Who considers him preeminent? I don’t.” McPherson is a Pulitzer Prize-winning historian of the Civil War, and author of what is widely considered the standard single-volume treatment of the subject, Battle Cry of Freedom. In December 2019, McPherson joined distinguished scholars Gordon Wood, Sean Wilentz, Victoria Bynum, and James Oakes in questioning Hannah-Jones’s attempts to recast the American Revolution as a fight to preserve slavery. Rather than answer them, she dismissed the group as a whole by labeling them “white historians.”

And she’s criticized academics who aren’t professional historians but who weighed in against the Project; you’ll know these people:

Hannah-Jones saved her most brazenly abusive attacks though for African-American critics of the 1619 Project, such as Columbia University professor John McWhorter and journalist Coleman Hughes. When McWhorter, Hughes, and other African-American scholars launched a competitor 1776 Project in February 2020 through the Robert Woodson Center, Hannah-Jones lashed out on Twitter by posting photos of herself making derogatory gestures at her black interlocutors. Although she later deleted the tweets at the apparent request of her employer, Hannah-Jones made Hughes in particular a focus of her continued verbal abuse. “That Ivy League education certainly didn’t do you any favors,” she wrote in another comment to Hughes in August 2020. “Next time screenshot me and don’t quote text me because I’d rather not read your drivel. I tried to find something to quote tweet in that profoundly mediocre 1776 Project essay you wrote, but alas, nothing was worthy.”

Here’s one of those derogatory gestures, though I’m not quite sure what it means. Readers? 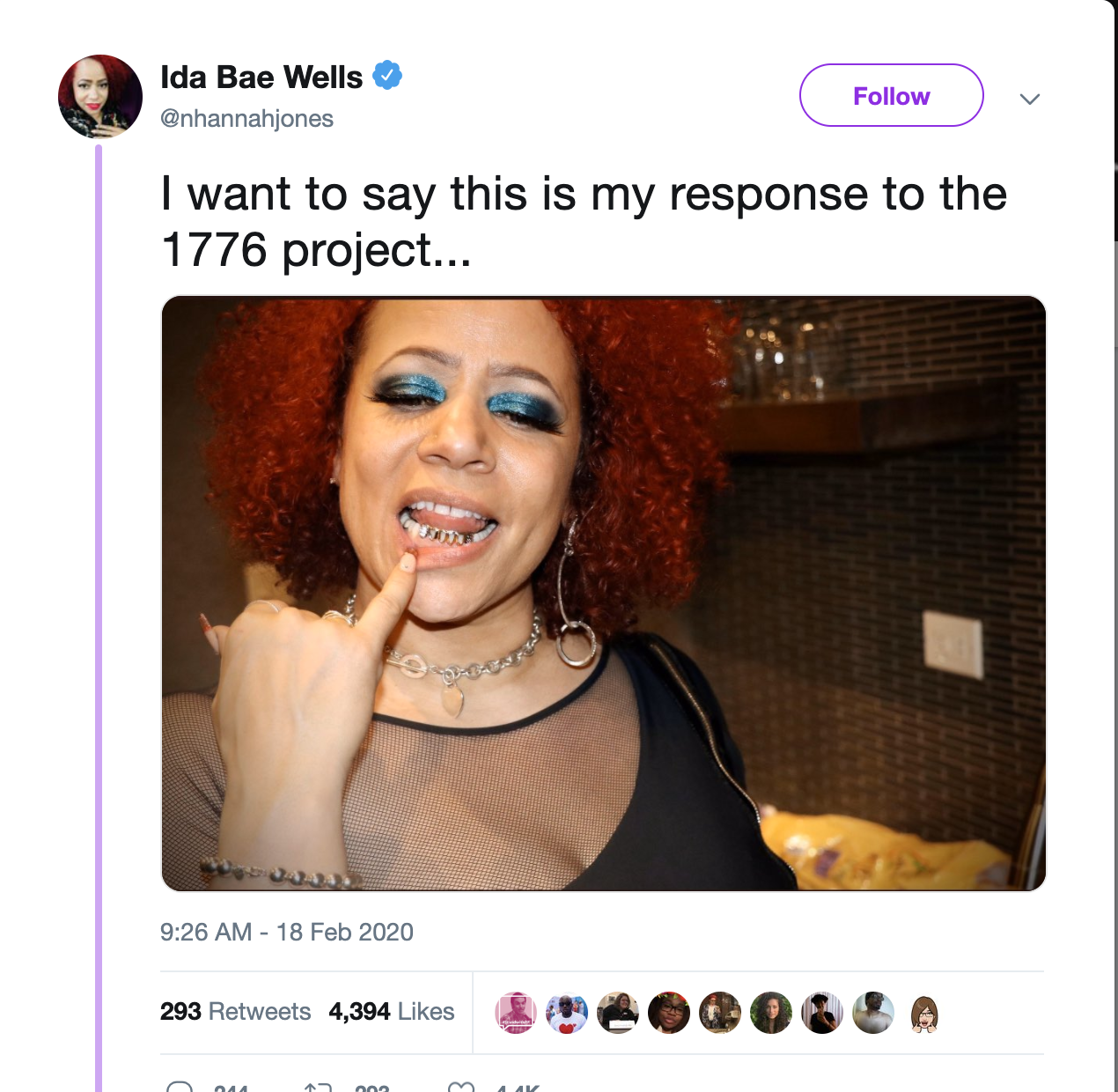 At any rate, the idea that Lincoln may not have been as anti-slavery as we thought, something raised by Magness and used and touted by Hannah-Jones, was credited to someone else when Hannah-Jones found that Magness wasn’t fully on board with the 1619 Project:

The 1619 Project book now states only that Lincoln supported “colonization schemes as late as 1862,” and further implies that Lincoln abandoned the program after he issued the Emancipation Proclamation on January 1, 1863. Hannah-Jones’s new source for this revised claim appeared in footnote 38 of her essay: a 2016 popular press book entitled Stamped From the Beginning by Critical Race Theory activist Ibram X. Kendi.

And, having observed Hannah Jones’s behavior through all the criticism, I’ve realized that no real scholar would act the way she did in the face of that criticism, including questioning credentials, making gestures, changing what you wrote without admitting it, and so on.  The Project could have been so much better—and it still has some very good stuff—but the moment the NYT decided to call it the 1619 Project was the moment that they wedded themselves to an ideology and a narrative that could not be altered.

But as a broader matter of principle, Hannah-Jones’s behavior illustrates the absence of basic scholarly integrity from her approach to writing history. Rather than following the evidence where it leads, Hannah-Jones picks and chooses bits and pieces of her arguments from a secondary literature based on whether it conforms to her preconceived political narrative. She approaches citations as a tool by which she can reward other scholars who affirm that narrative. And if a previously-cited scholar runs afoul of Hannah-Jones, she is perfectly willing to alter the “history” presented in the 1619 Project in ways that excise the offending work and replace it with a completely different narrative – provided that its author flatters Hannah-Jones’s own personal politics and ambitions in the process.

69 thoughts on “More infighting among academics about the 1619 Project”