Good morning on the Sabbath that is made for man but not for cats: Sunday, December 12, 2021. It’s National Cocoa Day, and I recommend the Mexican hot chocolate (as thick as syrup) served at Rick Bayless’s Mexican street food restaurant Xoco in downtown Chicago. Here it is, served with hot, freshly fried churros to dip in the chocolate: 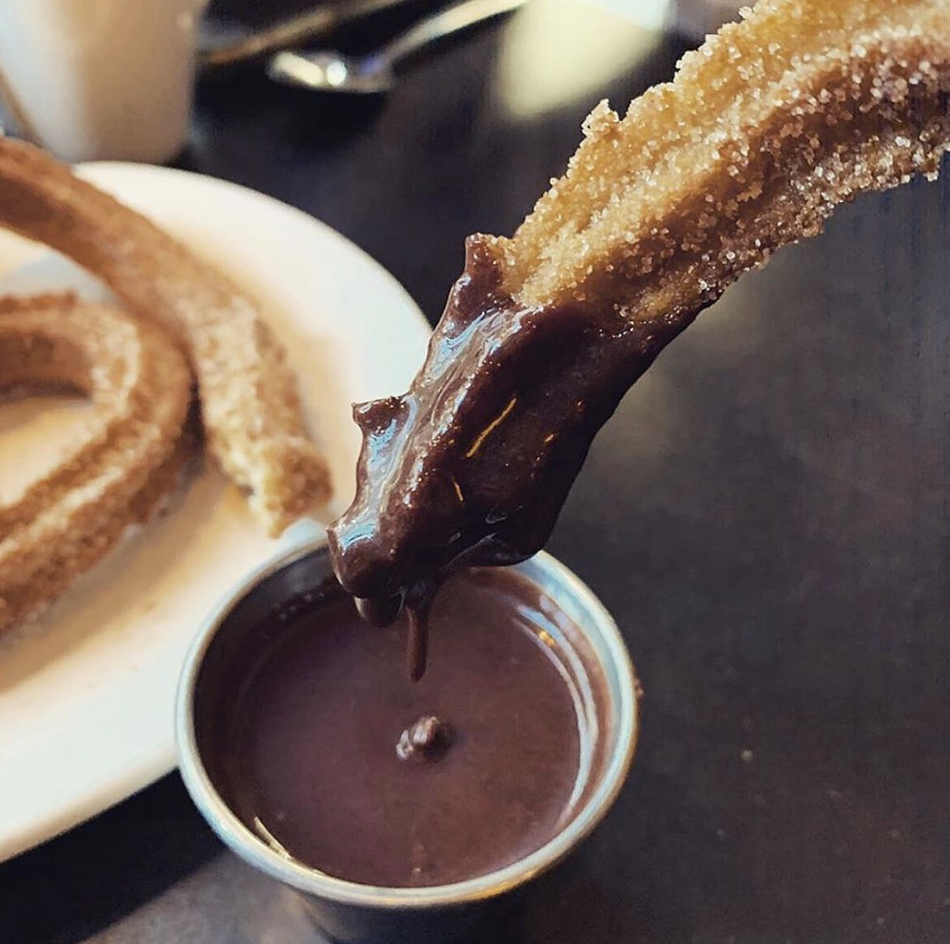 It’s also Gingerbread House Day, National Ambrosia Day (god help me, I like the stuff!), and National Poinsettia Day. And it’s 13 shopping days until the beginning of Coynezaa.

*Anne Rice died yesterday at 80. Here’s an announcement (with cat) from Facebook, and a tweet below that from her son: 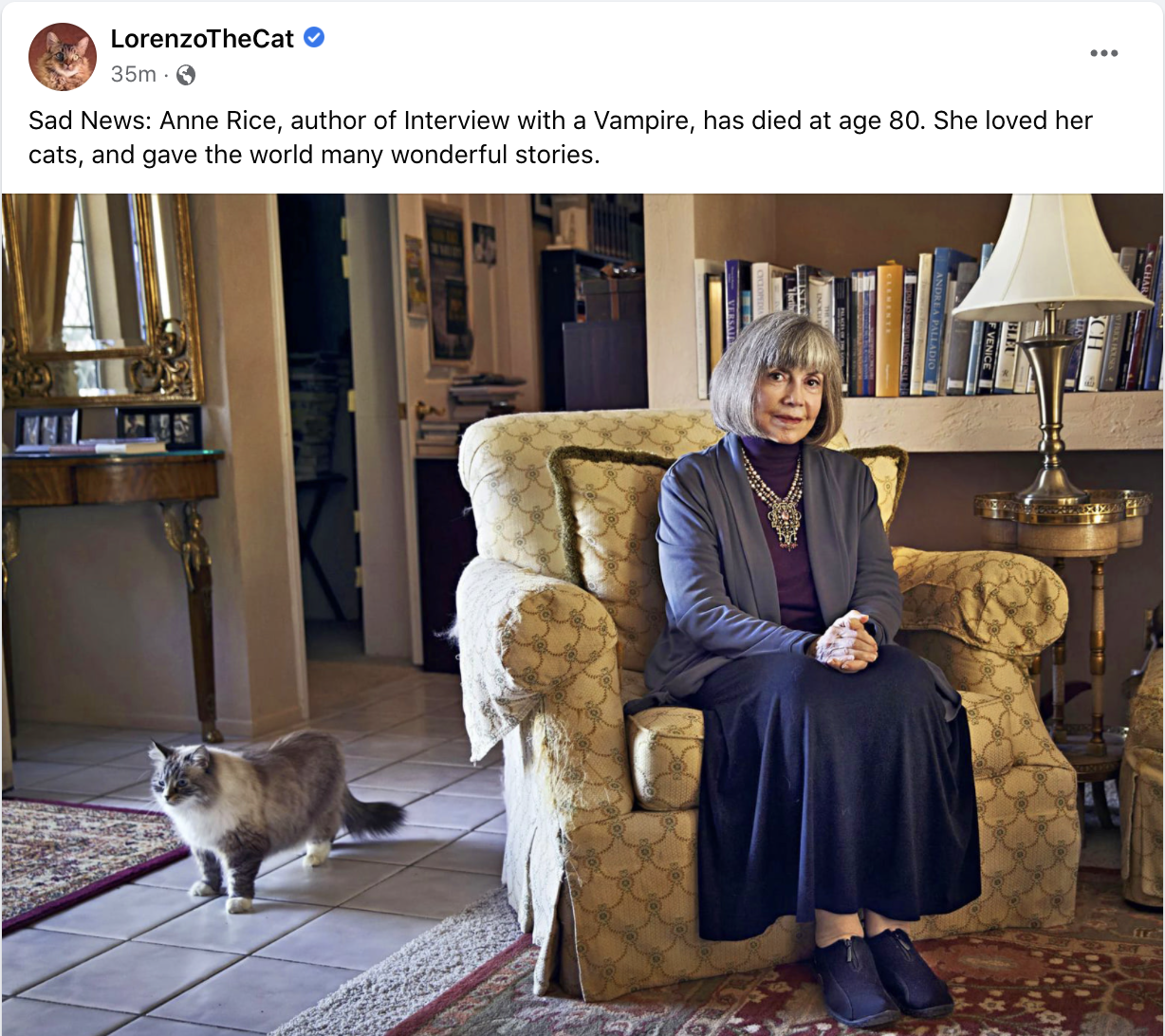 This is Anne’s son Christopher and it breaks my heart to inform you that earlier tonight Anne passed away due to complications resulting from a stroke. Below is the statement I shared on her Facebook page moments ago. pic.twitter.com/jIHYg6uewI

*The biggest news in the USA is the violent tornado that struck six states yesterday, destroying a candle factory in Kentucky (killing about 70 people out of 110) and an Amazon warehouse in southern Illinois.  I’d guess that at least 200 people will have been killed when they reach a final count.  The NBC Evening News said last night that this may have been  a single giant tornado that traveled 250 miles, which would make it the long-distance champion. in recorded American history.  Anchor Kate Snow interviewed the mayor of Mayfield, Kentucky, the site of the candle factory, and asked her what the city needed. The mayor’s answer was short but depressing, “Prayers.” I can think of a lot of other things that might actually help.

“We can’t guarantee your safety. It is really, really out of control. I said it to people before, it’s like that movie ‘Purge,’ you know, instead of 24 hours to commit your crime, these people have 365 days days to commit whatever they want,” McBride said.

His warning seems to resonate with some residents.

“It’s pretty scary walking at night,” said Sarah Veenstra, who moved to LA from Wisconsin about six months ago. She said she didn’t realize crime and safety would be such an issue.

“I genuinely thought it would be a safe area. It turned out not be as safe as I thought. I’m definitely, like, carrying something on me every time I leave the house when it’s dark out,” she said.

There’s been a wave of smash-and-grab robberies, which I suppose AOC would say were misreported.

*We all know that the Wright Brothers invented the first workable airplane, right? Not so fast! As the Washington Post reports, even the Smithsonian Institution onced begged to differ, labeling one of their planes (not a Wright Brothers construction) thusly:

“The first man-carrying aeroplane in the history of the world capable of sustained free flight. Invented, built and tested over the Potomac River by Samuel Pierpont Langley in 1903.”

Well, that is duplicitous. Langley’s plane, below, was launched from a houseboat on the Potomac on October 7 and December 8, 1903, and crashed shortly after both takeoffs. The Wright Brothers’ plane flew and landed successfully for 12 seconds on December 17, attaining a height of 60 feet. The Wright Bothers win, but the Smithsonian put that label on Langley’s plane because they concluded it was capable of flight. That pissed off Orville, who battled the Smithsonian for 20 years about who made the first flight (Wilbur had died):

Orville Wright did not take this one lying down. In a 1925 public letter about the Smithsonian’s Langley exhibit, Wright asserted that “the machine now hanging in the institution is, much of it, new material and some of it of different construction from the original,” and “the card attached to the machine is not true of the original machine or of the restored one.”

Wright set off a national firestorm by revealing in his letter that he planned to send the Wright Flyer to the Science Museum at South Kensington in London. “No one could possibly regret more than I do that our machine must go into a foreign museum,” he wrote.

The Smithsonian refused to budge. Congress held hearings. Republican Rep. Roy Fitzpatrick of Ohio called the institution’s stance “an outrage against the Wright brothers and an attempt to cheat them out of the victory of their discoveries.”

In 1928, new Smithsonian director Charles Abbot issued a statement offering to revise the offending label, but only “if Mr. Wright will openly state in a friendly way” that “he believes that the Langley machine was capable of flight under its own power.” Wright considered the offer an insult and shipped off the Wright Flyer.

Finally, in 1942, the Smithsonian caved under pressure. It reported that Abbot had “tendered sincere apologies to Dr. Orville Wright for misleading statements by former Smithsonian officials,” and it said if the Wright plane were sent to the Smithsonian, it would be given “the highest place of honor which is its due.”

The Wrights were right, and now the Wright Flyer is back in Washington, D.C. Here’s Langley’s plane, and then the first plane that really flew:

And the Wright stuff:

*An article in the New York Times addresses a new faux conspiracy theory: that “birds aren’t real”.  Yes, the theory is that birds are drone replicas of birds (but how did they know what to make the drones look like?) created to spy on Americans. It’s more nuts than the Q-Anon/pizza molestation theories, but it’s just a Generation-Z jokev(h/t Paul):

Last month, Birds Aren’t Real adherents even protested outside Twitter’s headquarters in San Francisco to demand that the company change its bird logo.

The events were all connected by a Gen Z-fueled conspiracy theory, which posits that birds don’t exist and are really drone replicas installed by the U.S. government to spy on Americans. Hundreds of thousands of young people have joined the movement, wearing Birds Aren’t Real T-shirts, swarming rallies and spreading the slogan.

It might smack of QAnon, the conspiracy theory that the world is controlled by an elite cabal of child-trafficking Democrats. Except that the creator of Birds Aren’t Real and the movement’s followers are in on a joke: They know that birds are, in fact, real and that their theory is made up.

What Birds Aren’t Real truly is, they say, is a parody social movement with a purpose. In a post-truth world dominated by online conspiracy theories, young people have coalesced around the effort to thumb their nose at, fight and poke fun at misinformation. It’s Gen Z’s attempt to upend the rabbit hole with absurdism.

I think it’s great, but you can bet your bippy that some people are going to take this seriously. None are reported in the article. Their truck is below (note the claim “birds charge on power lines”), and their site, with official merchandise, is here. 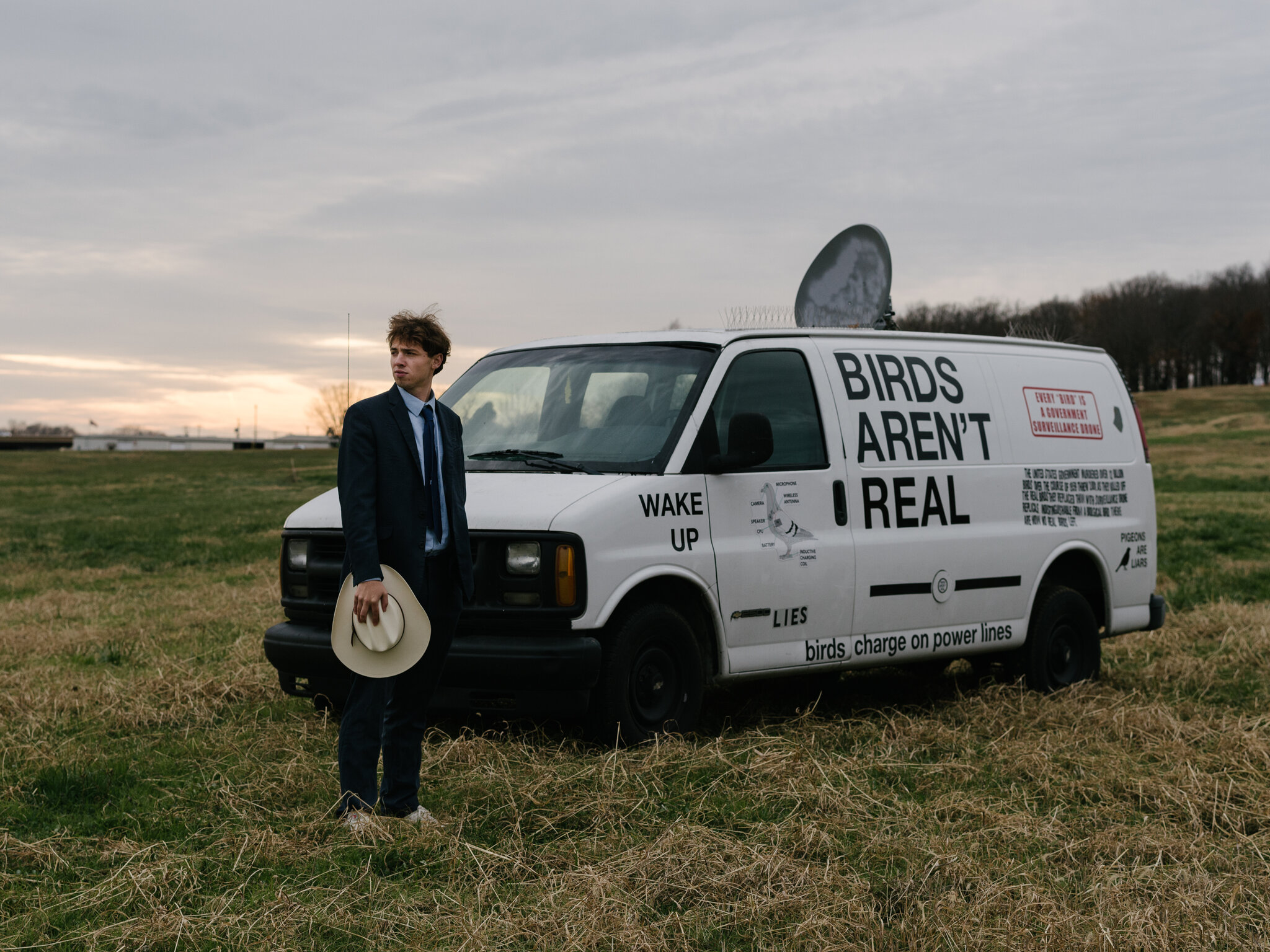 *The BBC reports that Rosie Kay, head of the eponymous and celebrated British dance company, has quit her own organization after a dinner at her home with her company that resulted in a discussion about transsexuals. Inevitably, that led to accusations of transphobia against Kay, her apology, but also continuing argument that ultimately led Kay to quit. There’s no telling from the article who did or said what.   (h/t Abe)

Stuff that happened on December 12 includes:

That is the worst mining disaster in England, but not in the UK. The worst was in Wales: the Senghenydd Colliery Disaster on October 14, 1913, which killed  439 miners and a rescuer. Below a photo from Wikipedia of that disaster, labeled: “Crowds await news at the Universal Colliery, Senghenydd.

As we learned yesterday, this may be dubious.

Here’s Father Flanagan, born in Ireland, with some of his boys (they later let girls in, too): 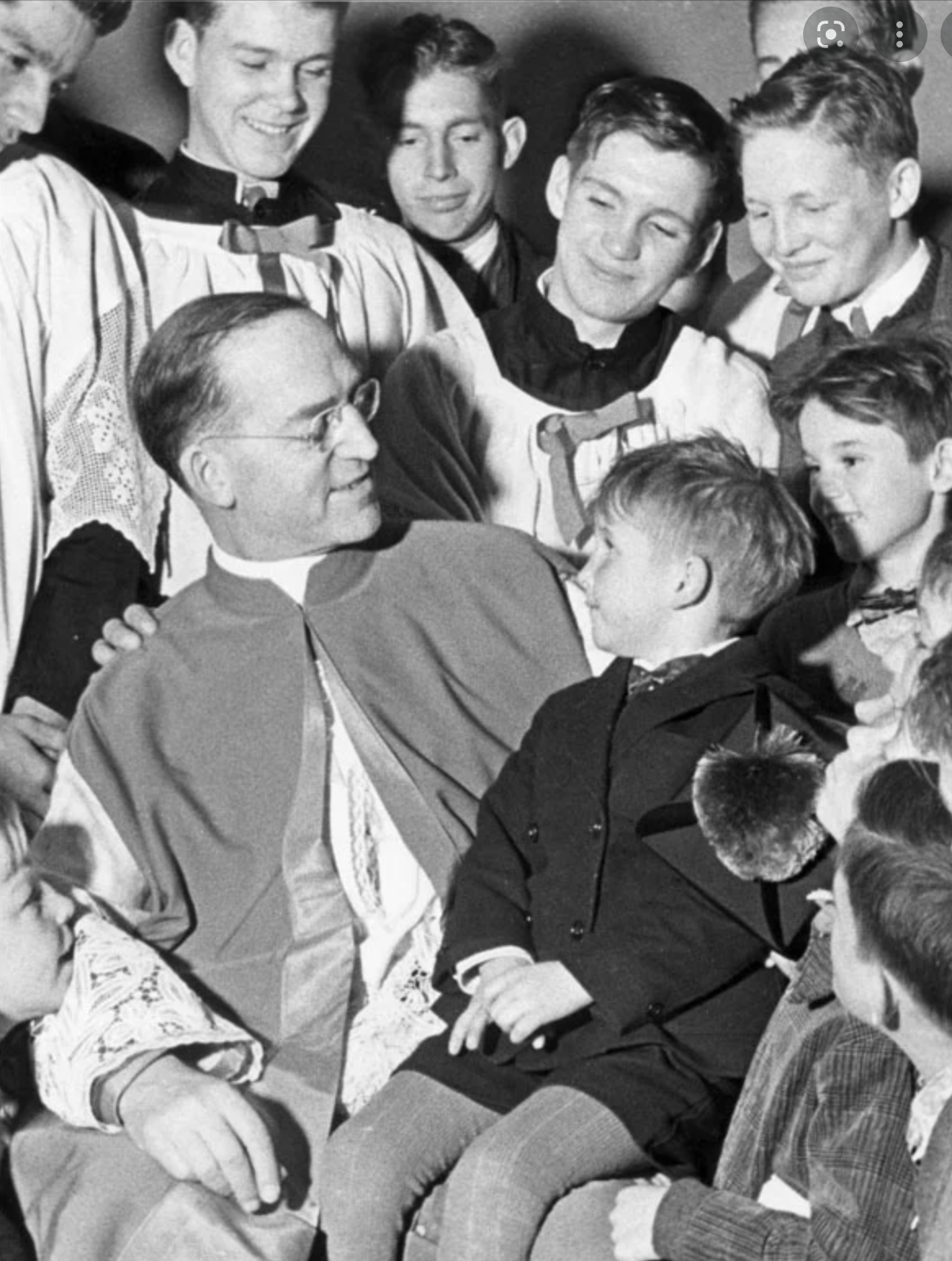 This was a project to produce more Aryan children to populate the Reich. Here’s a 42-minute video about it:

Here’s what Goebbels wrote in his diary that evening:

Regarding the Jewish Question, the Führer has decided to make a clean sweep. He prophesied to the Jews that, if they yet again brought about a world war, they would experience their own annihilation. That was not just a phrase. The world war is here, and the annihilation of the Jews must be the necessary consequence.

Here’s the Chairman of the Board singing “You Make Me Feel So Young” (1962 performance, song written in 1948).

*She has a Ph.D. in neuroscience but, despite her asseverations on television commercials, hasn’t done neuroscience since her degree. In the commercial below, she not only distorts her profession, but pushes a useless nostrum for “improving your brain”:

Notables who died on December 12 were also few; they include:

Bankhead acted in more than 300 films, plays, and stints on television and radio. She had a huge libido and smoked six packs of cigarettes a day. Wikipedia reports:

Bankhead died at St. Luke’s Hospital in Manhattan on December 12, 1968, at age 66. The cause of death  was pleural double pneumonia, complicated by emphysema due to cigarette smoking, malnutrition, and possibly a strain of the flu which was endemic at that time. Her last coherent words reportedly were a garbled request for “codeine … bourbon”.

Here’s an episode of “I Love Lucy” in which Tallulah appears. It’s great:

Meanwhile in Dobrzyn, Hili and Andrzej are getting into it again:

Hili: With all due respect, I think you are mistaken.
A: On what grounds do you think so?
Hili: Everybody is mistaken from time to time. 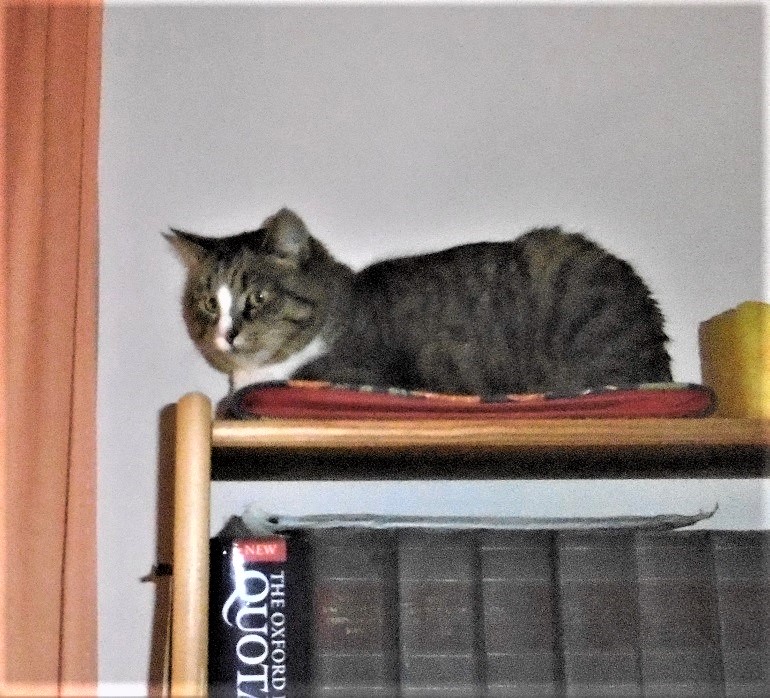 Here’s a photo Andrzej took of Paulina outside photographing Hili (inside): 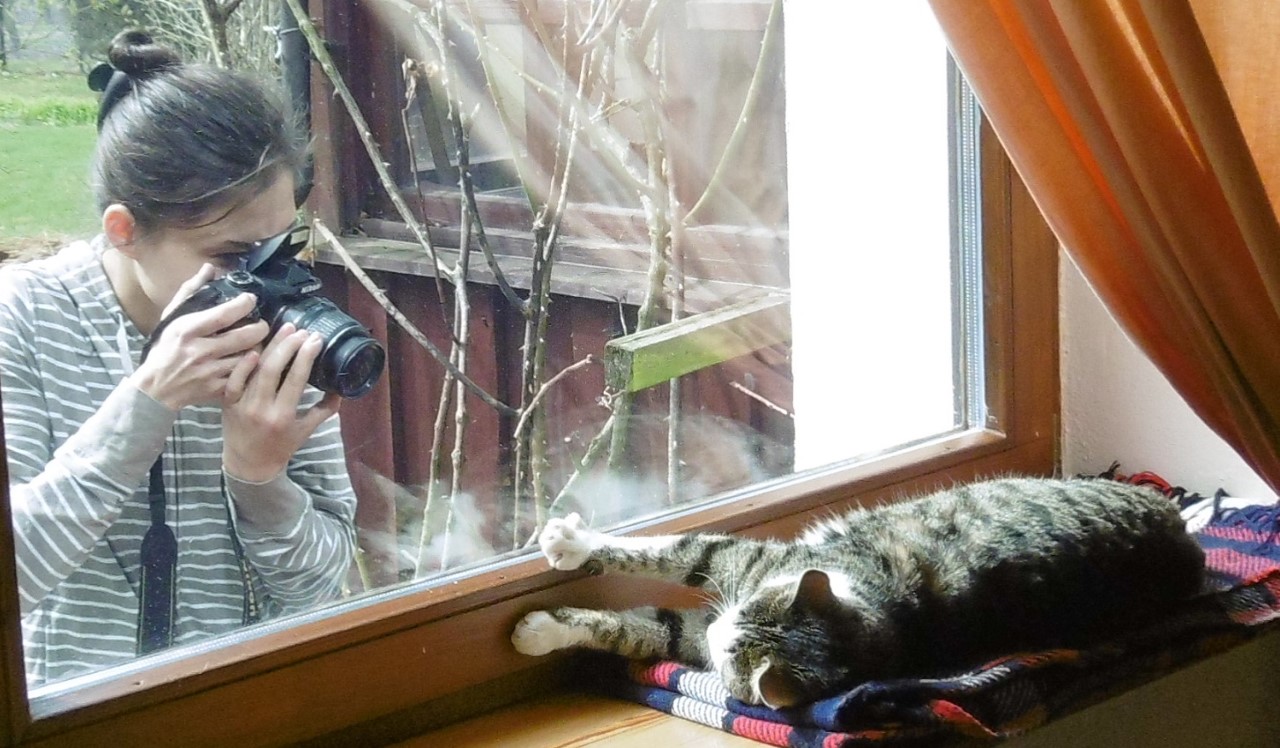 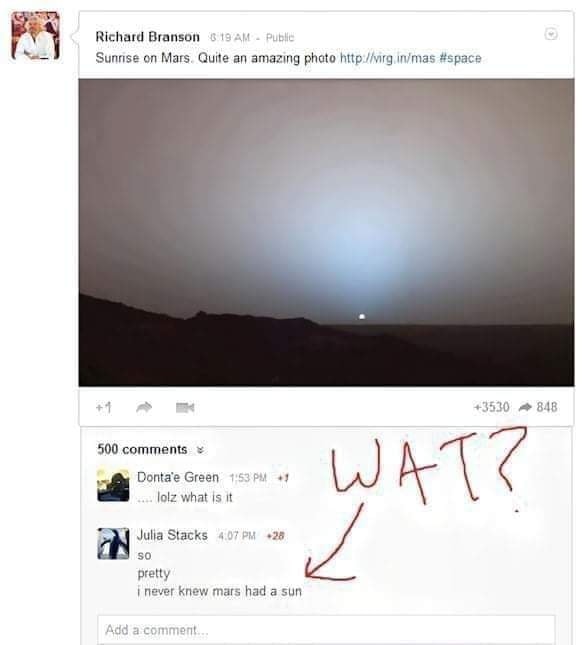 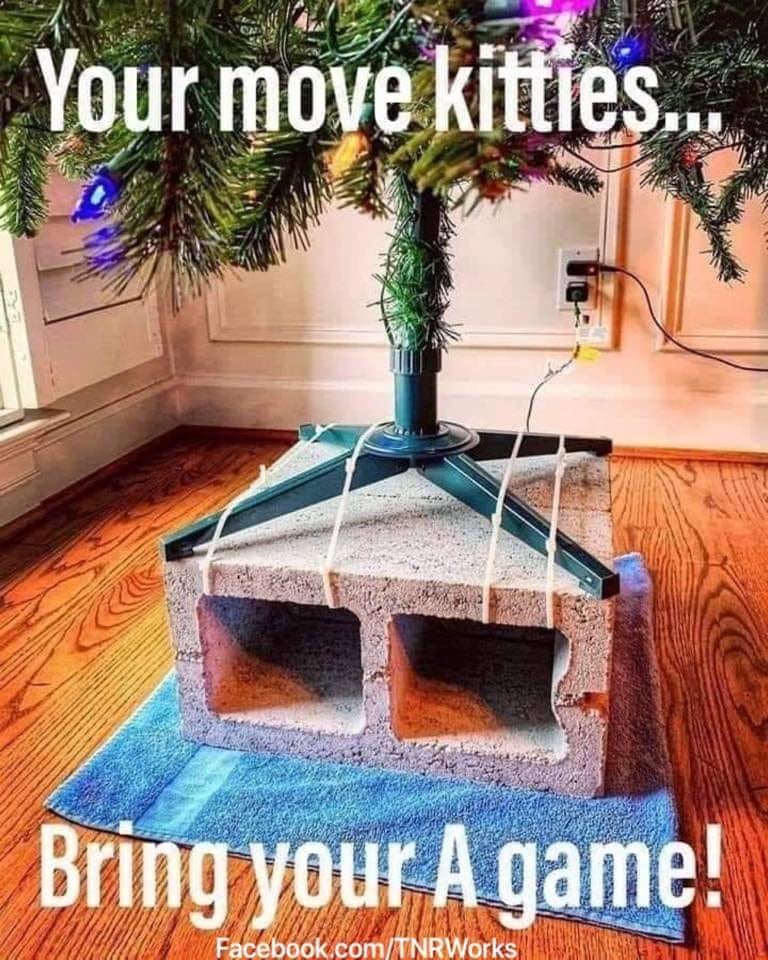 An old but great Gary Larson cartoon sent in by Stash Krod: 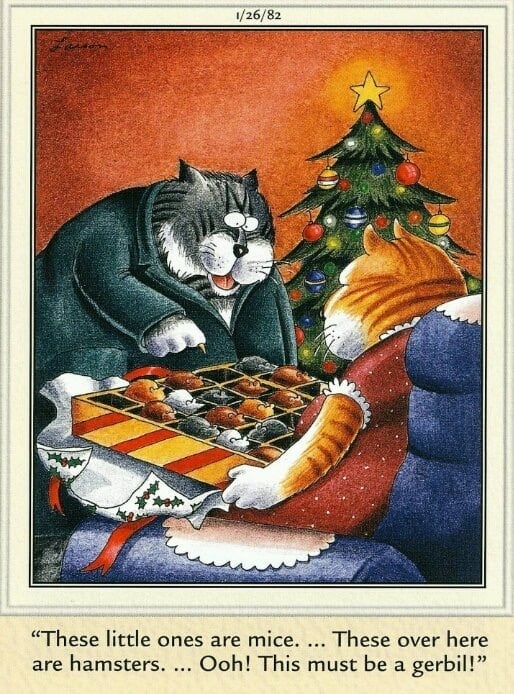 Titania’s back tweeting again, though I’ve been told that Andrew Doyle (her creator) said in an interview that Her Wokeness is running out of things to say.

I can think of nothing more racist than assuming that people of colour can read, write and count to ten. pic.twitter.com/3RZzGpQ6n9

Reader Barry sent this screenshot of a tweet by Chelsea Handler: 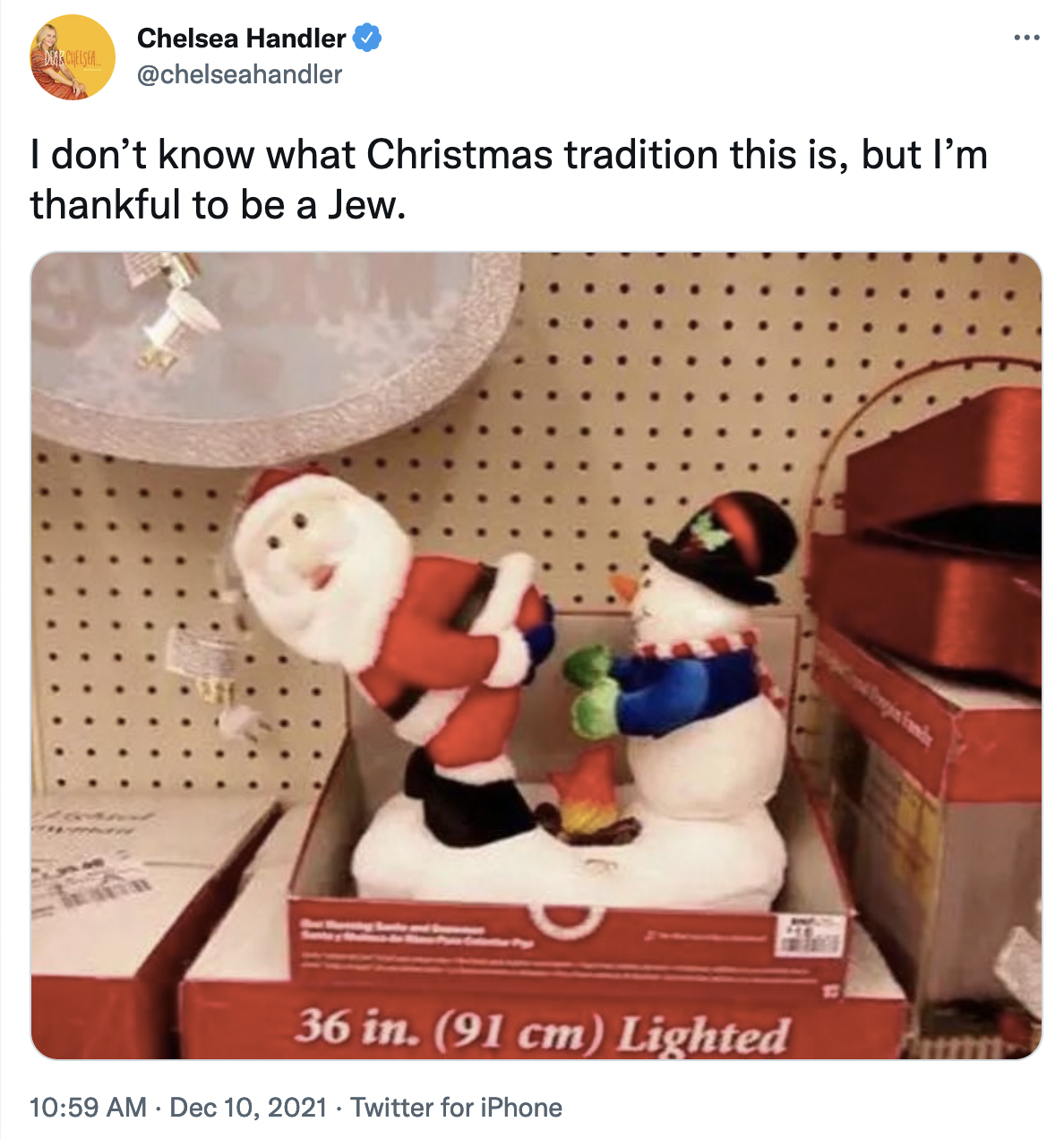 From Luana: the miracle of modern dentistry. I never had braces, and so am amazed:

From Ginger K.: I wonder if I could pass for a goy her and buy a tree.

Tweets from Matthew. Can your find the curved line? Good luck!

Matthew says: “This could have been your mum if your dad had played his cards right?” I wonder how many readers will understand the allusion.

Sophia Loren in the kitchen, 1965 pic.twitter.com/D44RP9hGCk

An excellent tale about a partly domesticated crow; click on the link to read:

Amazing story about a talking crow & looking for home https://t.co/fheUx9861L

Nature displays its palette ~ starlings have been in Africa for millions of years and have evolved into multiple species with brilliant iridescent colourings. Here’s the golden-breasted starling ■ emerald starling ■ & superb starlinghttps://t.co/leStwWuh0p pic.twitter.com/ewc4WEhpPa

***There are NO curved lines in Matthew’s first tweet.