Both of my maternal grandparents entered America from Eastern Europe: my grandfather (David Frank) came fleeing the Bolshevik Revolution, and my grandmother, Salie Mermelstein, came from Hungary in 1901 as an infant.  I don’t know what my grandmother did after arriving, but I know (or rather, was told) that my grandfather lived on the Lower East Side of Manhattan, where many Jews found their footing in America, and rolled cigars for a living. Later he moved to Pennsylvania and started an auto parts store that burgeoned into a chain. He married Sali (now called “Sadie”) who was younger, and produced a single daughter, my mom, along with two boys, my Uncles Bernie Moe. Here’s the arrival certificate for Salie. 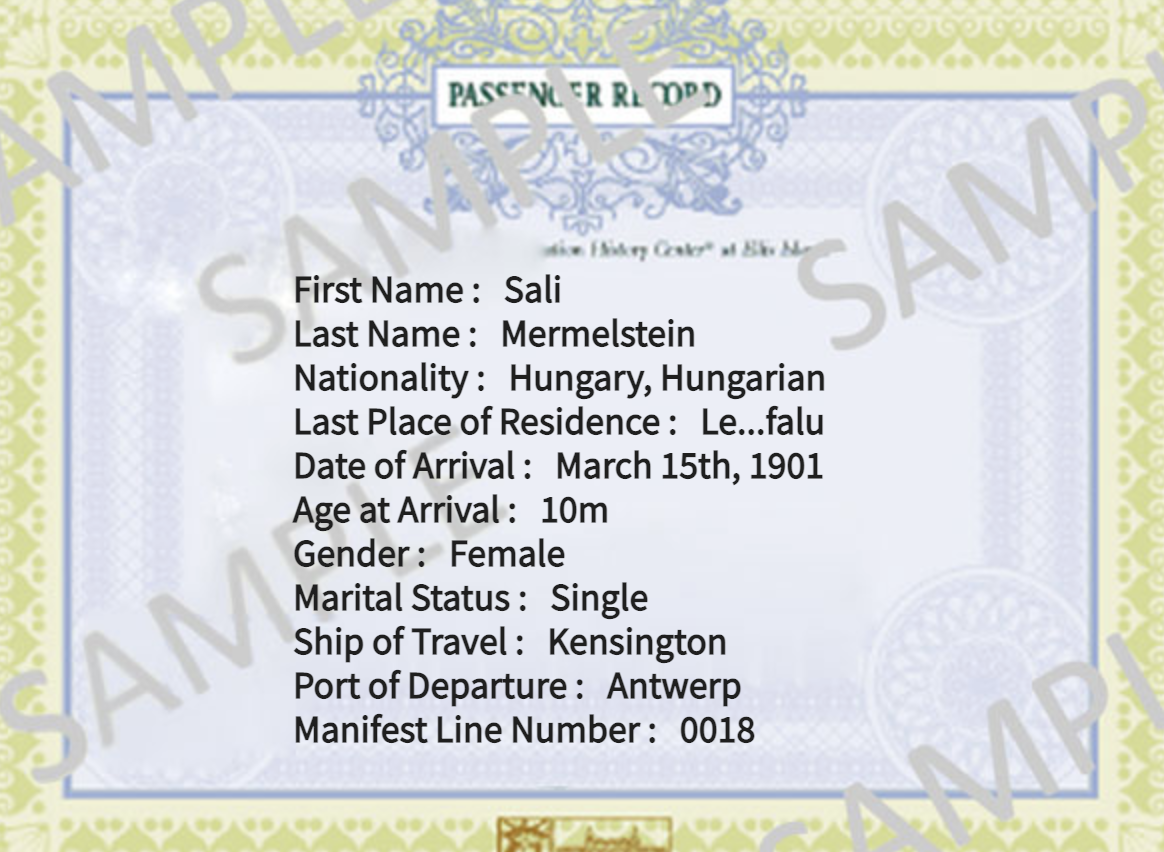 And here’s a photo of Bernie (left) and Moe, all duded up to play golf at the Jewish country club (they weren’t allowed in goyische country clubs). I love this photo. Look at Moe’s pants! 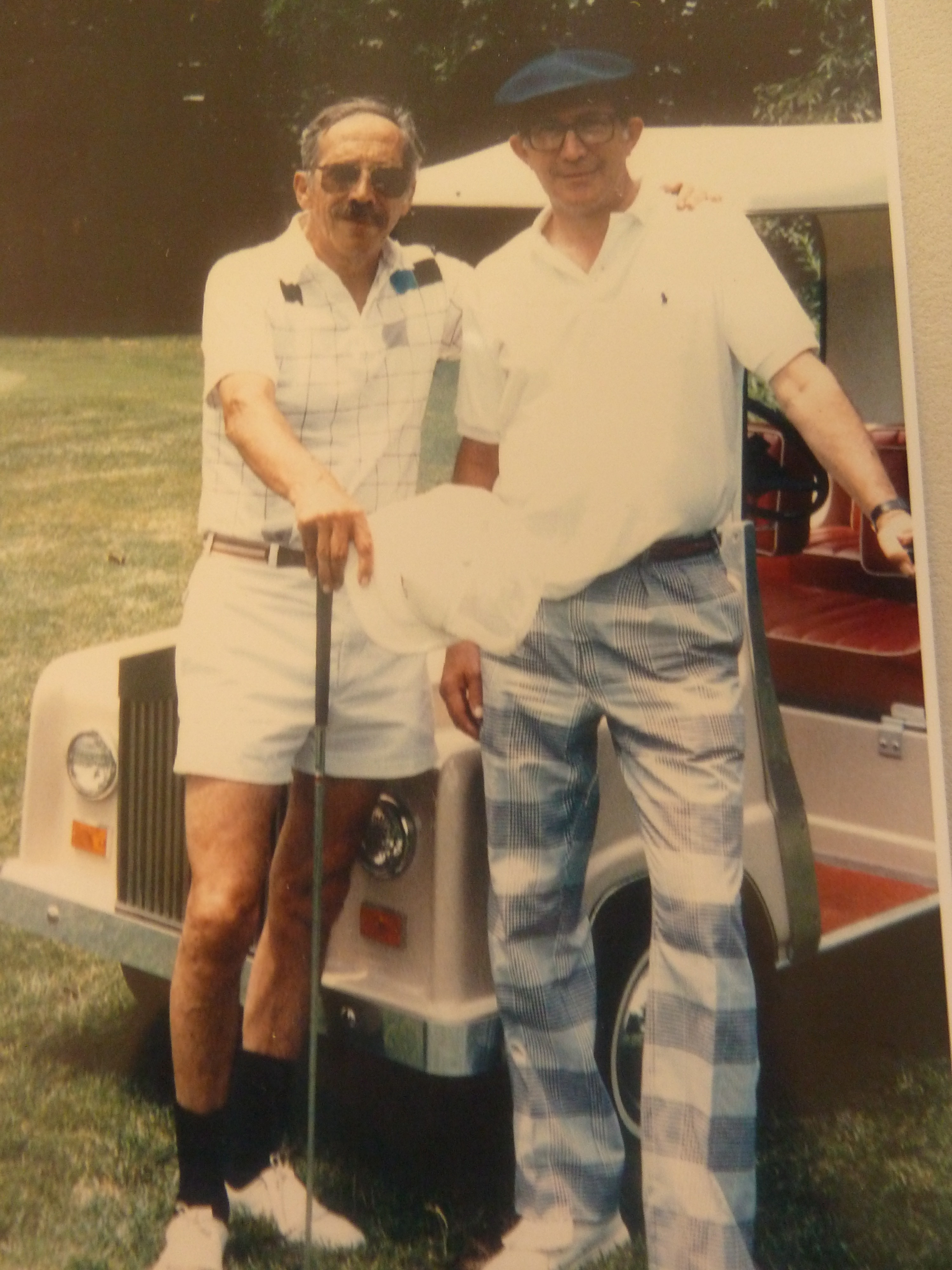 Anyway,  if you go to the Ellis Island website, and know the names of your ancestors who immigrated, and the names aren’t too common, you can find them. (I couldn’t find my grandfather, and will research further.)

The reason I brought this up is because I always feel drawn to the Lower East Side when I go to Manhattan, and always go there to sample the rapidly-dwindling Jewish culture, which has largely moved to other places. (The area is now becoming Hispanic.) One of the places I wanted to visit was the Tenement Museum, a building on Orchard Street that really held immigrants (about 7,000 of them between 1863 and 1935) before it became decrepit and was later converted into a Museum showing how immigrants (many of them Jewish) and refugees lived in various times. Here’s a video about it:

When I was last in New York, I discovered the place because I was staying in a hotel across the street, but my time was limited (I was there for the New Yorker Festival) and I never got to see the place. I won’t miss that chance again, as the Museum gets very high ratings.

At any rate, Wokeness has now invaded the Tenement Museum, as the following two articles (the first in the Spectator World [SW] and the second in the Jewish News Service[JNS]) relates. Click on the screenshot to read.

As the first article notes, the immigrant who resided there were Irish, Jewish, German, and Italian. The writer Peter Van Buren, who worked at the Museum until it got too woke, notes:

When I joined the Museum as an educator in early 2016, it was a small, elegant, good place. Inside a restored 19th-century tenement apartment house, it told the story of some of the actual all-immigrant families who had lived there, from inside their actual apartments. Of the over 7,000 people who inhabited that building over its lifespan, researchers established who had lived in which rooms, detailed their lives, forensically reconstructed the surroundings, and shared it with guests. Some rooms had 20 layers of wallpaper applied by the different generations who had lived there.

Rule one for educators like me was “keep it in the room,” meaning focus on specific individuals and how they lived in the room where you were standing. Over the years, these included Irish, Jewish, German, and Italian immigrants. There had been no Bangladeshis, Spaniards, or blacks; their stories lay elsewhere, “outside the room.” It is the same reason there is no monument to those who died on D-Day at Gettysburg. That didn’t happen there. That story is told somewhere else. [JAC: I’ve read that some Chinese immigrants also lived there.]

No longer. The second article’s title tells the tale: the story of European immigrants wasn’t good enough in these times, especially when the murder of George Floyd changed many people’s ideology and, indeed, their narrative of American history. Now everything must be not just about race, but about whites versus everyone else. So it goes. And that trend has affected the Tenement Museum.

Quotes from the second article by Jonathan Tobin:

But the moral panic over race that swept through the United States in the wake of the death of George Floyd in the summer of 2020 caused the museum’s management to forget its core mission. It was a moment when woke politics demanded that the national discussion be solely focused on race and the notion that America was an irredeemably racist nation. Retelling the saga of how poor European immigrants lived in late 19th- and early 20th-century New York no longer seemed so crucial to its staff. They searched for a way to shift that focus to tell a very different story about the lives of 19th-century New Yorkers who were black.

. . .As a fawning feature about the shift published earlier this year in The New York Times reported, the museum was able to find a rationale to change direction because a city directory from the 1860s showed that there were two Joseph Moores in the city. One of them was an Irish waiter who lived at 97 Orchard St. Another was a black man who lived elsewhere in New York. In order to stay current with the times, the museum has now redesigned one of its apartment tours to tell the story of that particular Joseph Moore and his wife, even though—unlike everyone else featured in the exhibition—he never lived there. Nor was he an immigrant. As opposed to migrants who had braved ocean crossings in unhealthy “coffin” ships to get to America, Moore had merely taken the ferry from New Jersey.

Along with that shift, the museum has also redone its Irish family tour to downplay the sufferings of those immigrants. Instead, it will speak of the racism of some of the Irish that supplied part of the motivation for one of the most disgraceful incidents in New York history: the 1863 draft riots in which mobs not only protested the government’s policy of conscripting immigrants during the Civil War but also lynched African-Americans.

There are a few problems with this decision. One is that the Irish family whose story has been revised wasn’t even in the country in 1863; they arrived later in the decade. More to the point, it reflects a decision to stop highlighting the problems of immigrants to one about another subject and to portray one such group negatively as if the entire saga of the Irish in New York could essentially be erased because of what some did. Were any institution to do that about an immigrant group with a more protected status in 2021, it would be considered an act of prejudice. But in today’s woke culture, it’s considered enlightened storytelling.

One of the people who have commented about this startling and disappointing turn of events is writer Peter Van Buren, a former Tenement Museum educator, who discussed the topic in a column in The Spectator. [JAC: the article above.]

As Van Buren notes, the life of the African-American Joseph Moore is worthy of remembrance. But shoehorning that into the Tenement Museum is much like commemorating those who fell during the fighting on D-Day during World War II at the Gettysburg battlefield. “That didn’t happen there. That story is told somewhere else,” he said.

Moreover, the desire of the museum to move in this direction reflects the passions of the moment, rather than a devotion to history that should be at the core of any such institution. He speaks of an Asian-American staffer at the museum who exclaimed at a meeting, “No more Jews. I want to tell my story!” As he writes, that person was the child of university professors who had grown up in a wealthy suburb. These days, however, the narcissism of contemporary woke professionals transcends history.

The Tenement Museum’s remodelling, like the NYT’s 1619 Project, is a conscious, deliberate, and misguided attempt to tweak American history in the service of an ideology. And the ideology is the same in both cases.

Let’s face it, blacks and immigrants had a rough time, but their stories aren’t the same. Blacks had it worse in many ways: they came here involuntarily, were put into forced servitude without pay, and were treated as chattel. Immigrants came of their own volition and took paying jobs, although those jobs were often low paid and the immigrants themselves, including Irish and Jews, suffered pretty severe discrimination from residents (all of whom, of course, came from immigrants themselves).  Blacks came to New York and other northern cities seeking opportunity after slavery ended, and did not settle on the Lower East Side, but in places like the South Side of Chicago.

This is all part of the tapestry that is America, and it all needs to be taught.  We need a Tenement Museum, and we need (and have) a Museum of African-American History and a Holocaust Museum. The more opportunities for such education, the better.  I have been to none of these, but I did tour what’s left of the Manzanar camp where Japanese-Americans (citizens!) were interned during World War II. These are all life-altering experiences. (For a real life-changer, visit Auschwitz.) The other three museums are on my bucket list.

I’ll end with another quote from Tobin:

In the last two years, wokeness has helped undermine freedom of speech and promoted a narrative in which racism dominates the discussion to the detriment of individual rights. The Tenement Museum isn’t so much celebrating diversity and inclusion as it is betraying its central mission to the detriment of the discipline of history. It is asking us to regard the stories of the immigrants who came to America in this period as somehow less important than those of others, whether or not they are entirely accurate. That may satisfy the desire of today’s elites and the chattering classes for virtue signaling, but it does neither the country nor the study of history any good.