Remember the adventures of Business Cat, a cat that somehow had acquired a suit, tie and a respectable job as a CEO, though he never forgot that he was a cat. There are fifty of those great cartoon strips at Demilked, and I’ll put up a couple. I find them hilarious, but your mileage may vary: 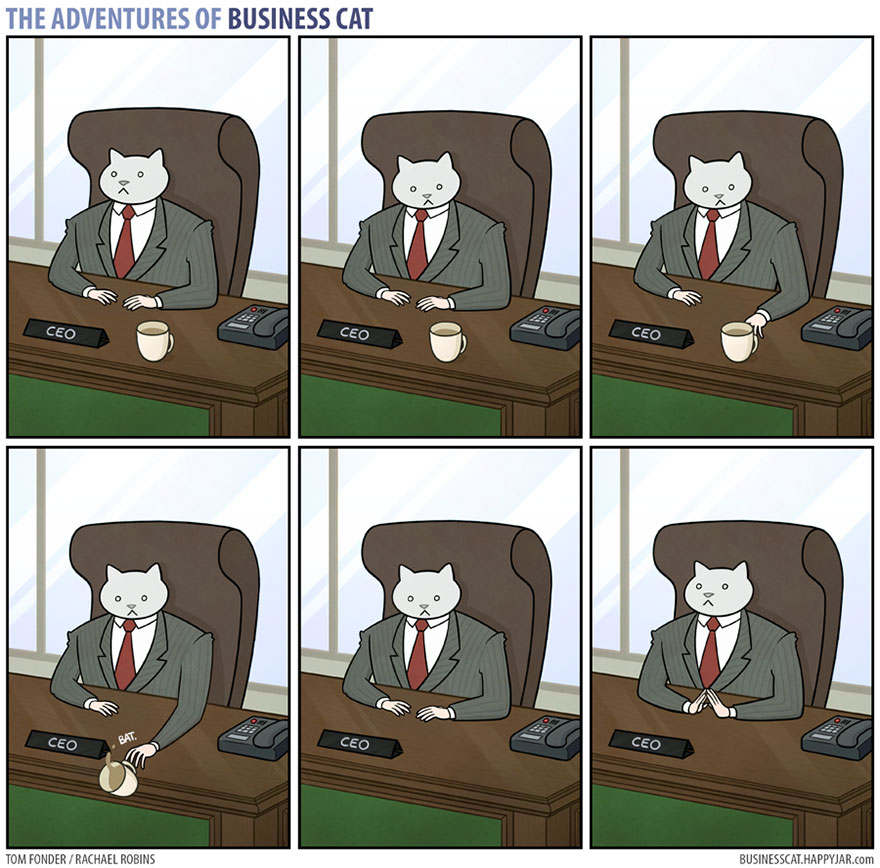 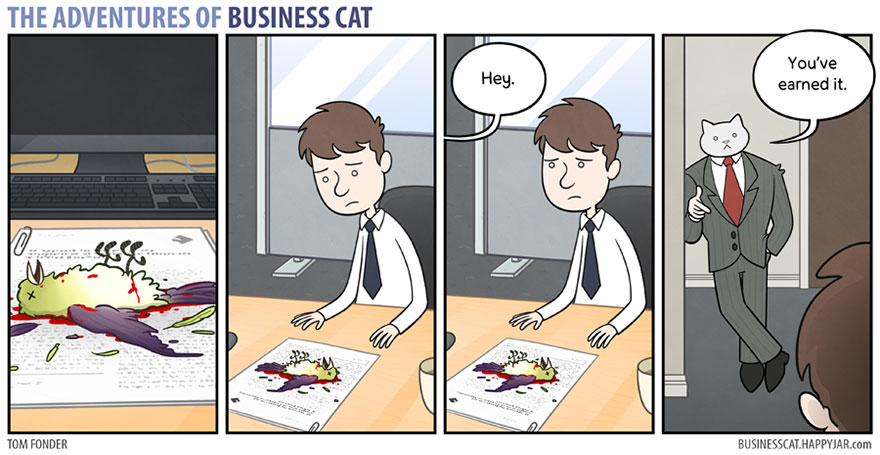 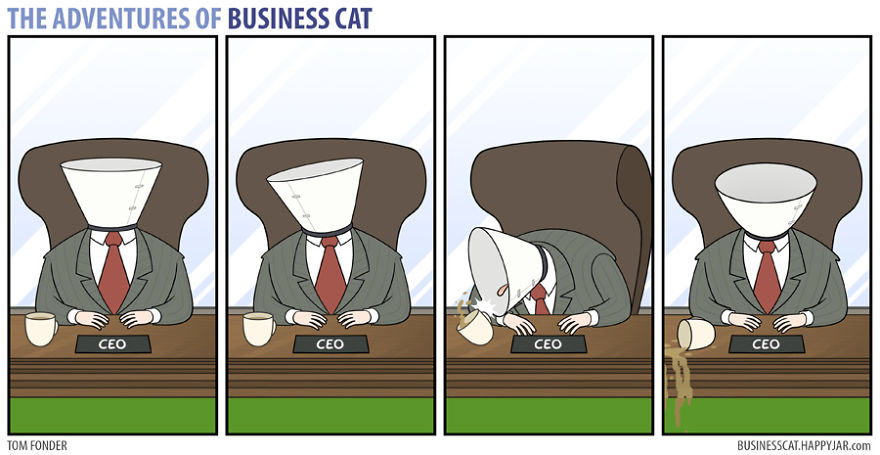 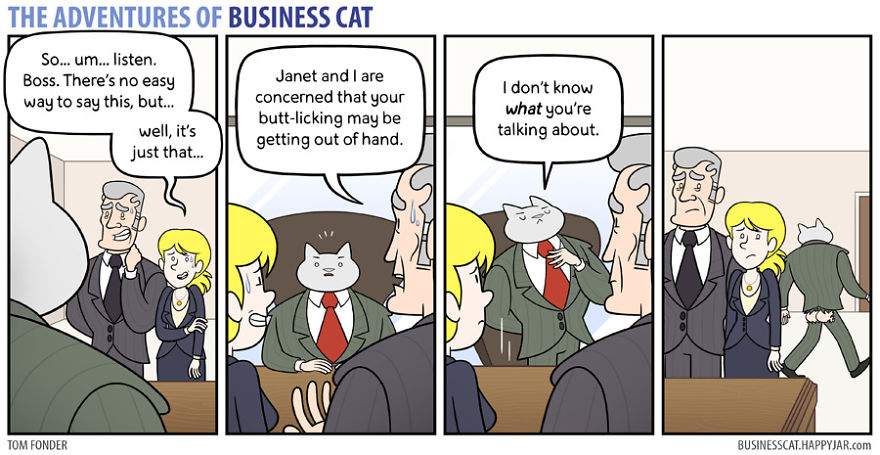 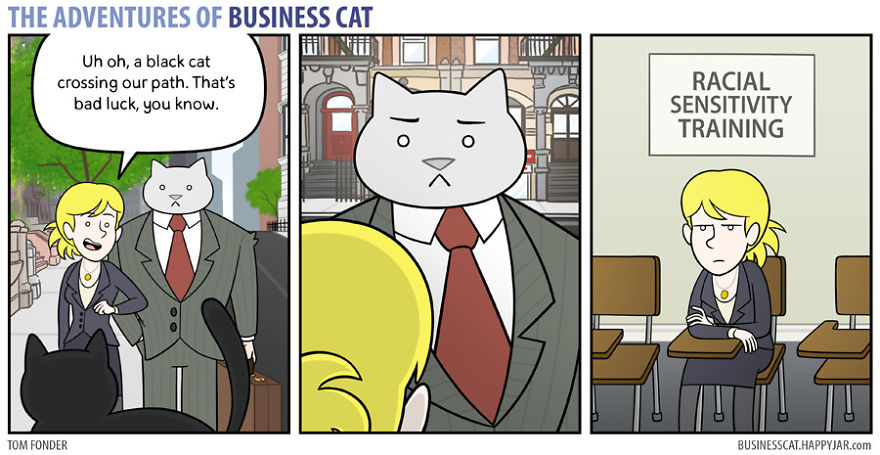 Reader David sent me this link to a Guardian article with a comment:

This morning’s Guardian carries a news story about the endangered Andean cat which I thought you might like to share in the Caturday felid trifecta.  There are photographs of this rare and handsome cat (just look at that stripy tail!), and a short video featuring a Chilean conservationist who is studying the species.

Click on the screenshot to read; the Wikipedia article about the Andean mountain cat (Leopardus jacobita) is here.  It’s highly endangered, and is a bit larger than the housecat. 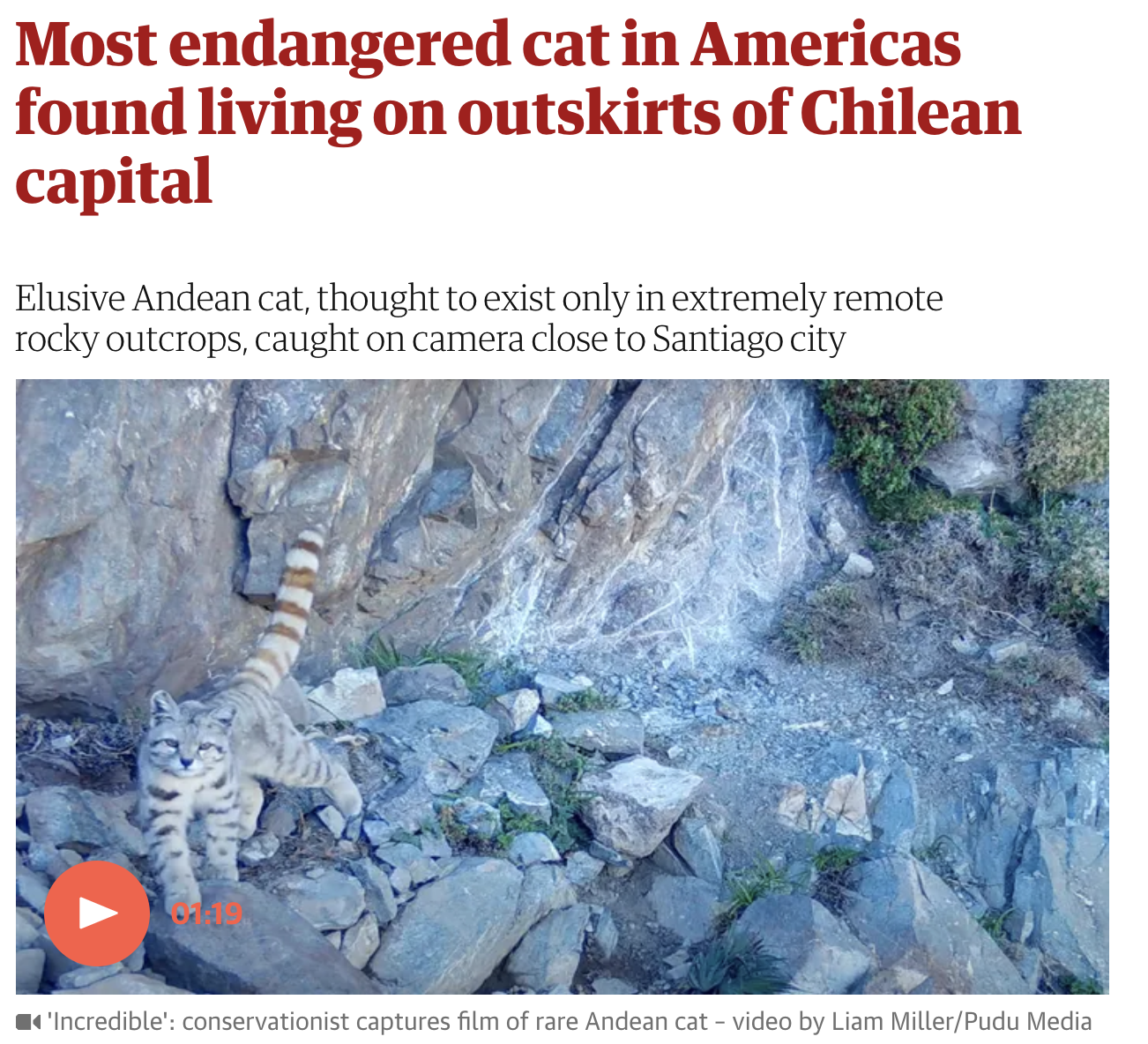 Excerpts (watch the video at the site):

Teetering over an arid cliff face above the sprawling Chilean capital, Bernardo Segura reviews the footage from the camera trap and lets out a yell of excitement as the images reveal a flickering striped tail.

On the screen displaying the conservationist’s latest video capture is an Andean cat – the most endangered feline in the Americas. Looking a little like a miniature snow leopard, the 4kg (9lb) male enters the frame and begins spray-marking the shrubs at the base of the cliff, before stealing away through sharp rocks with his banded brown and grey tail aloft.

Segura is excited for many reasons. With a shrinking population of fewer than 1,400 mature Andean cats left, any sighting is good. But this one heralds a signal of hope in a different way for the species and the conservationists battling against the cats’ extinction because it confirms a new population living close to humans – on the very edge of Santiago, a city of eight million people. 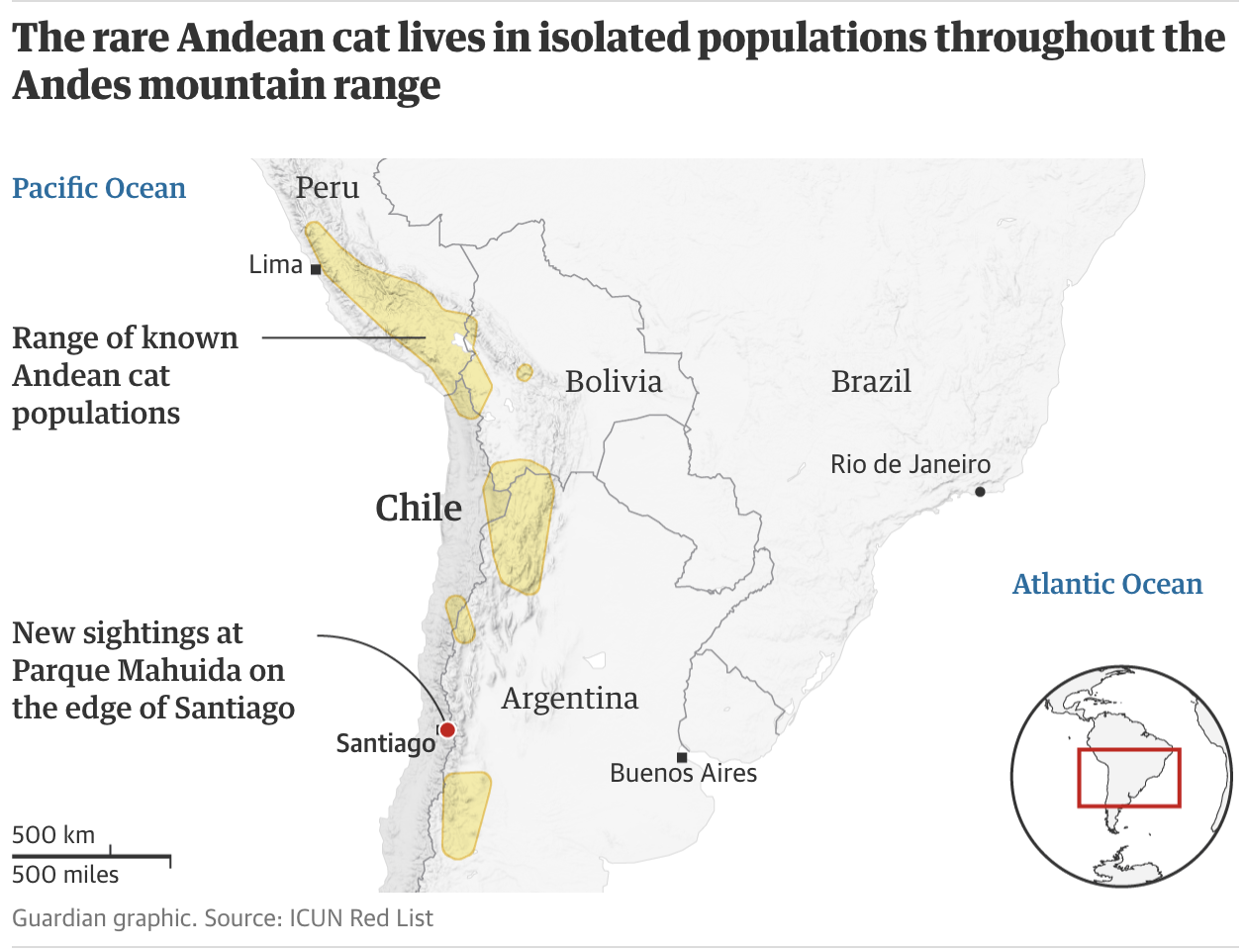 “We have never found a population so close to a large city before,” says Segura. “This changes what we know about Andean cats and may offer some solutions to how to protect this and other species in the wider mountain ecosystem, which is highly under-studied. Finding one of the most elusive animals in the world just outside Santiago strikingly illustrates this.”

Until now, Andean cats were believed to live only in extremely remote rocky terrain far from cities. But after seeing high numbers of the cats’ favourite prey – rodents from the chinchilla family called mountain vizcachas – around the popular Parque Mahuida nature reserve on the edge of Santiago, Segura trusted a hunch and in February placed camera traps on a terraced precipice above the neighbourhood of La Reina, about 2.5km, or 1.5 miles, from Santiago.

They have seen at least three adults, so this is not a solitary wanderer. And here’s a photo of what may be a mother and kitten!

“The need for the conservation of these newly discovered populations of the Andean cat around central Chile should be a priority. There are now three mega-mining projects threatening them, so if we don’t move fast, we’ll be witnessing their local extinction.”

Another threat is hunting by farmers indiscriminately eliminating any predators near livestock, while the IUCN also lists the climate crisis as a serious threat to Andean cats – Chile is enduring a decade-long drought, with annual rainfall deficits of 30-70% when modelled against the last 1,000 years. 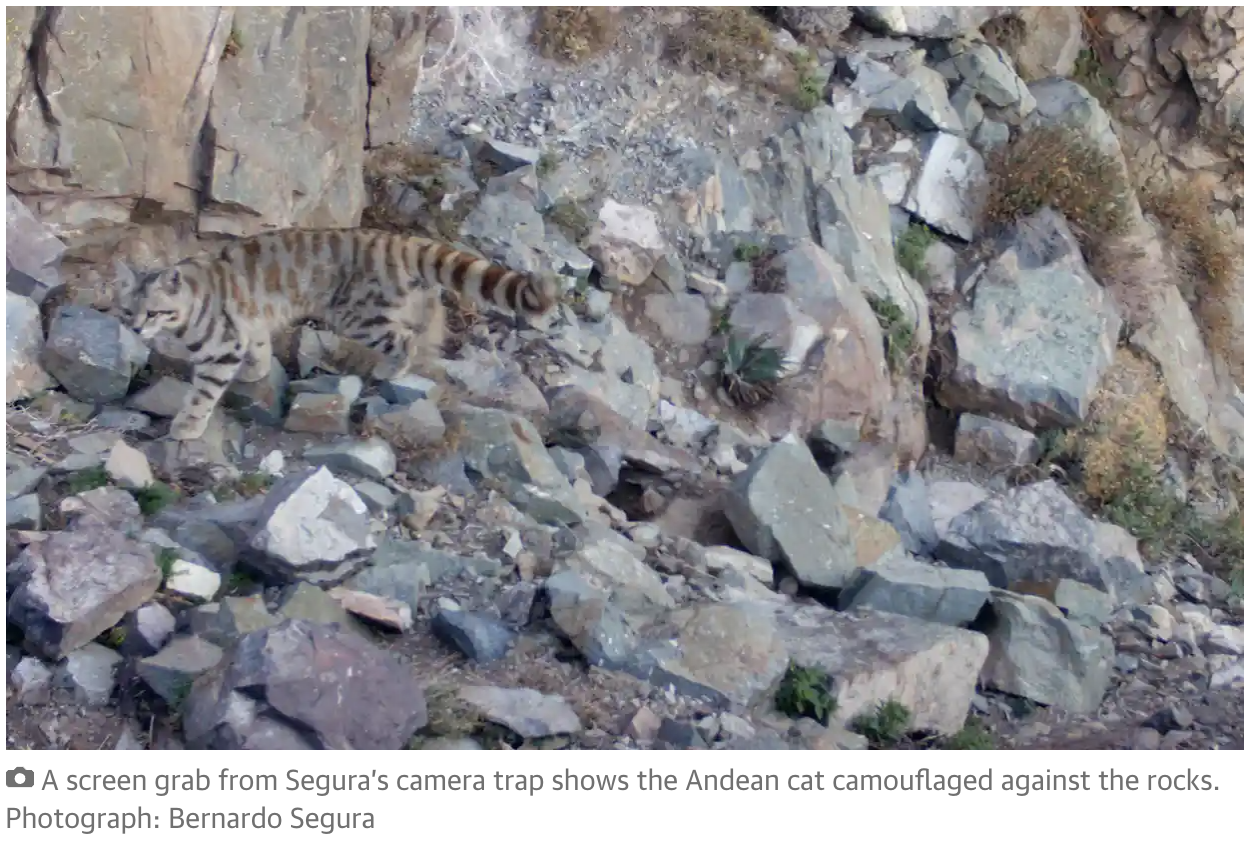 And a final photo from Wikipedia. They look fluffy but irascible, and I love the striped tail! 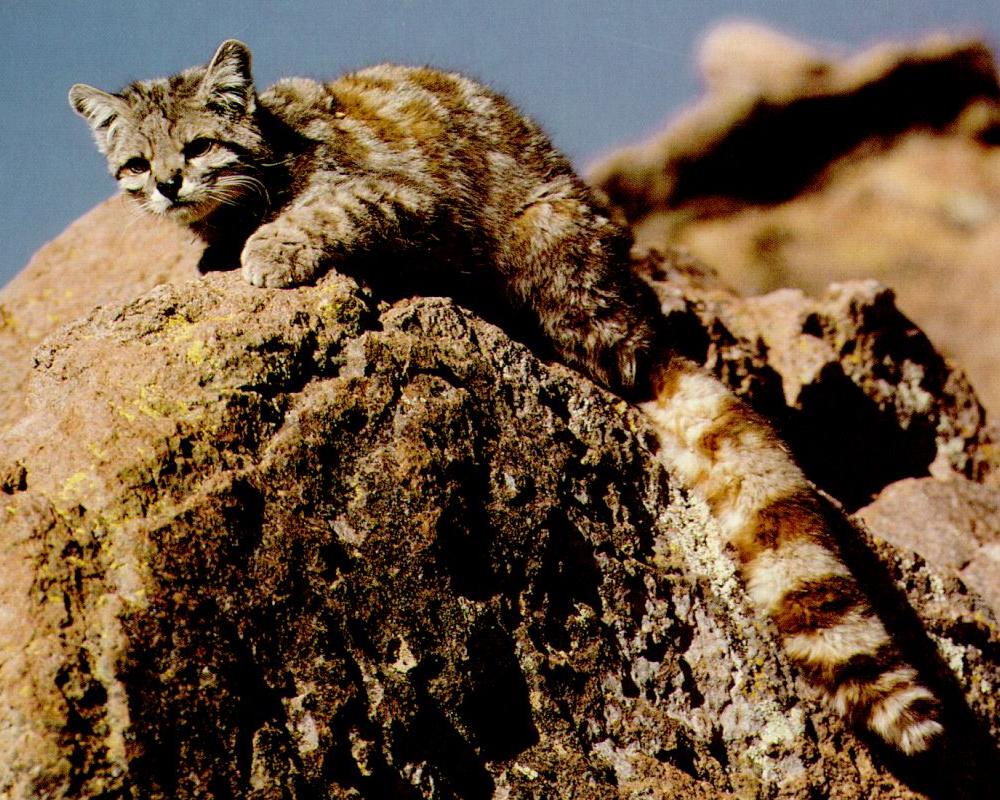 You may know that Mark Twain loved cats, and always had them, but this article from Smithsonian gives the details. Click on screenshot to read:

Mark Twain, AKA Samuel Clemens, turned his signature wit to a number of subjects–boyhood, the legend of King Arthur and even cats. “If man could be crossed with the cat,” he once wrote, “it would improve man, but it would deteriorate the cat.” 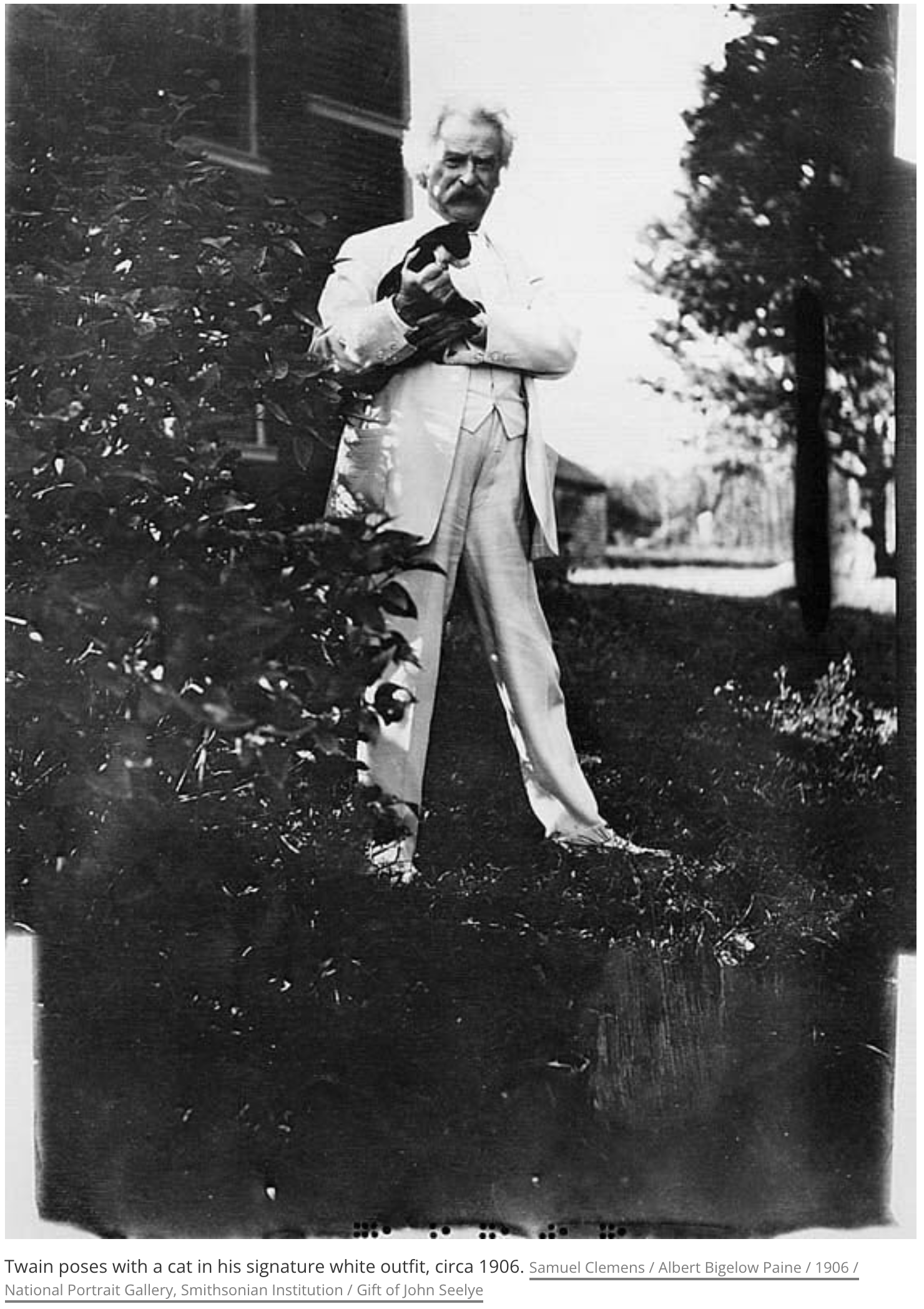 . . . Twain owned up to 19 cats at one time, writes Livius Drusus for Mental Floss, “all of whom he loved and respected far beyond whatever he may have felt about people. His cats all bore fantastical titles, among them: Apollinaris, Beelzebub, Blatherskite, Buffalo Bill, Satan, Sin, Sour Mash, Tammany, Zoroaster, Soapy Sal and Pestilence, writes Drusus.

Twain also wrote cats into his fiction. “Cats make cameos in some of his most famous works,” writes the National Portrait Gallery.  In The Adventures of Tom Sawyer, a cat named Peter features, but he was one of many, writes the gallery. 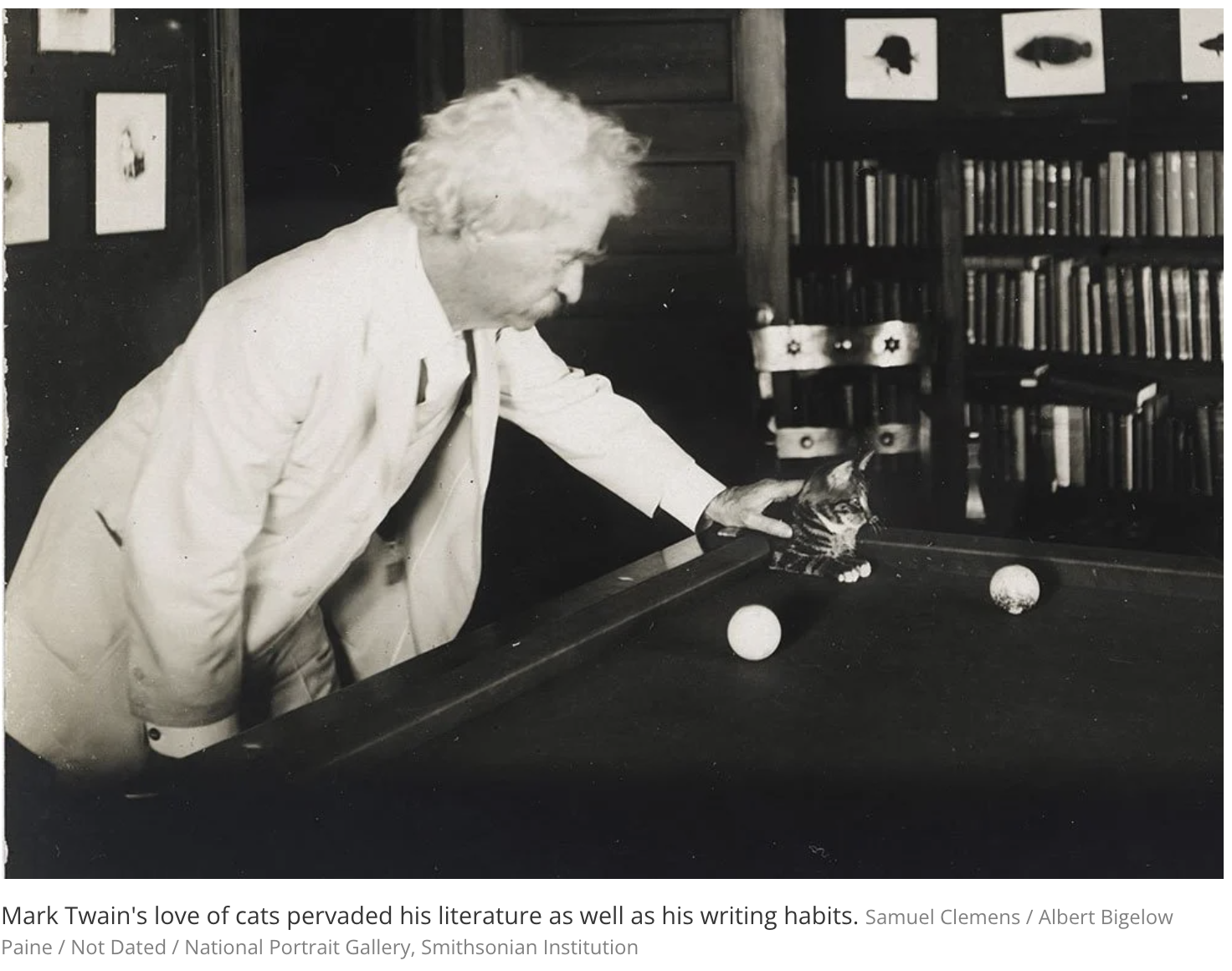 Throughout his life, when Twain travelled he would rent cats to take the place of his left-behind companions. “The most famous cat-renting episode occurred in Dublin, New Hampshire, in 1906,” writes Mack Hitch for New England Today. “Twain biographer Albert Bigelow Paine was there when the author rented three kittens for the summer. One he named Sackcloth. The other two were identical and went under the joint name of Ashes.” Why rent, you ask? He couldn’t travel with the cats, so he’d rent them and then leave behind money to help cover their care during all nine of their lives.

“Once, as he was about to enter the screen door that led into the hall, two kittens ran up in front of him and stood waiting,” Paine told Hitch. “With grave politeness he opened the door, made a low bow, and stepped back and said, ‘Walk in, gentlemen. I always give precedence to royalty.’” 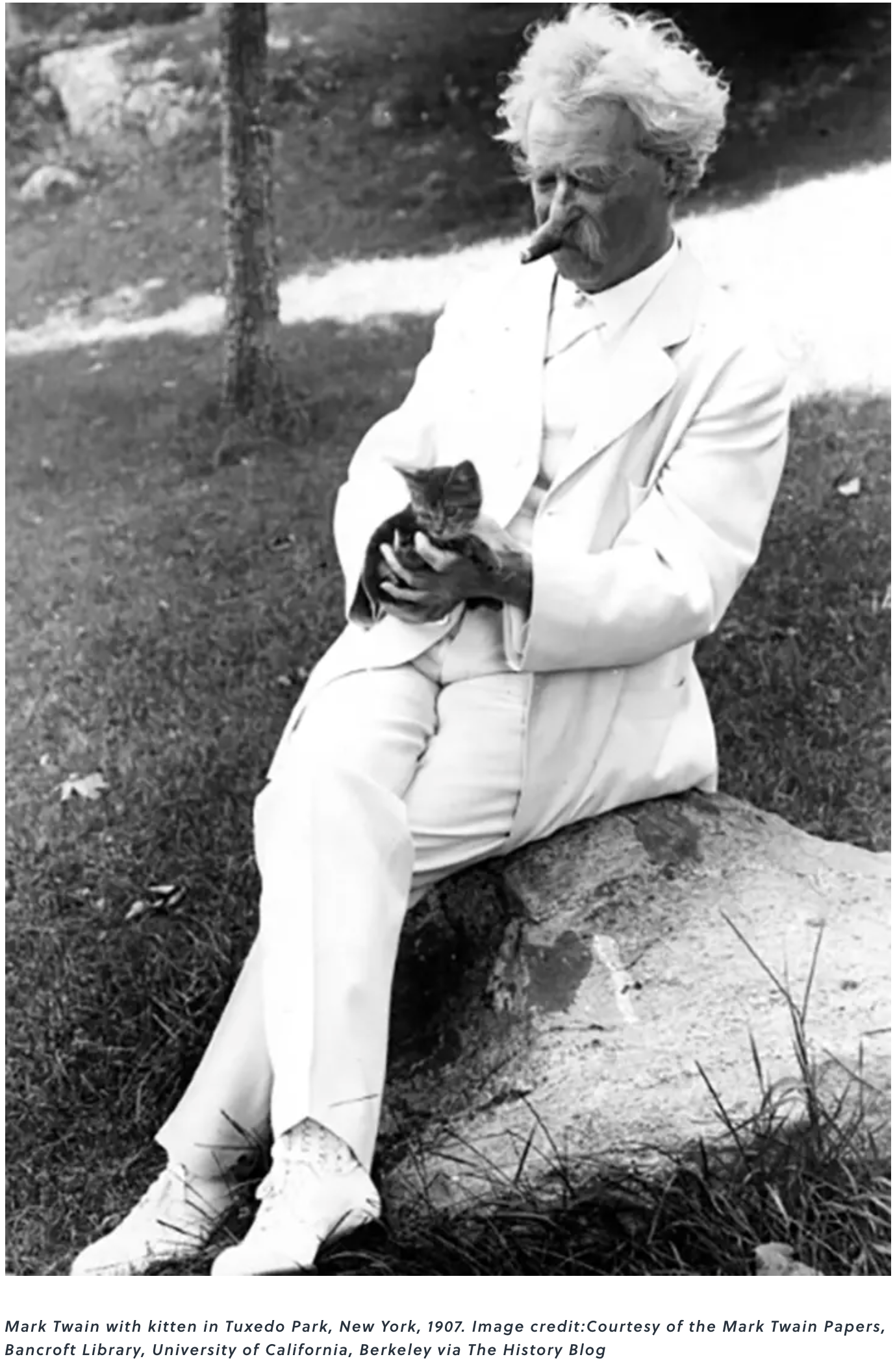 . . . Perhaps Twain’s greatest cat love was Bambino, a cat who had originally been owned by his daughter Clara. After Bambino went missing, Twain used his pen in an attempt to find him. He “took out an advertisement in theNew York American offering a $5 reward to return the missing cat to his house at 21 5th Avenue in  New York City,” writes Hutchison. Twain’s description of his beloved pet: “Large and intensely black; thick, velvety fur; has a faint fringe of white hair across his chest; not easy to find in ordinary light.” Bambino eventually came home on his own, writes Drusus, but not before numerous people had turned up with cats that might match this artistic description.

Lagniappe: Reader Debra adopted an older shelter cat, and I got to help name it! Here’s her story:

Two weeks ago, I responded to an ad in Nextdoor, the local social media newspaper of my area. An 8 year old cat named Patches needed a home. Her owner had been an old man who had died suddenly. He had been living in isolation as a recluse. Patches was his only company. He had rescued her as a stray 8 years ago and brought her to the deserts of Arizona from Tennessee.

His daughter lives in France. She came out to Arizona to clean out the house. She had limited time to find Patches a home before she needed to return. The daughter drove Patches in the back of a van to San Diego as she wanted to visit a friend and hoped to find a home for the cat here in San Diego.

I responded to the ad especially because Patches is older. I have come to the strange realization because of my age, a young cat would outlive me. The cat did not receive one offer for adoption, except mine. I am thrilled to announce my new family member.

When I sent Jerry the information on this new family member, Jerry thought Peaches is a better name. The funny thing is, my husband has been calling her Peaches.

Yes, she loves belly rubs! Unlike any cat I have ever serviced. 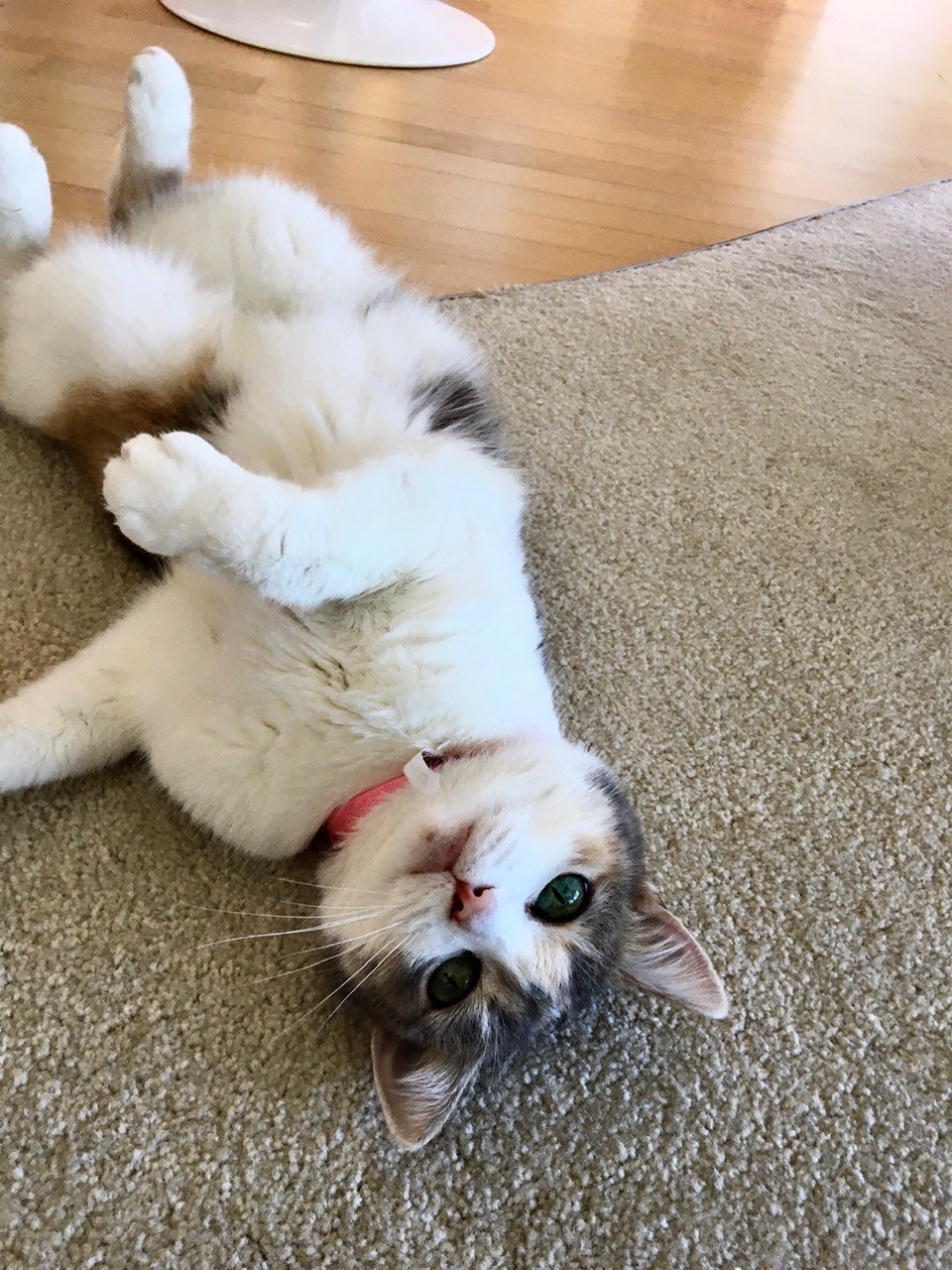