We all know Martina Navratilova, one of the greatest woman tennis players of history. Although she isn’t a “transphobe”, she’s opposed to transwomen competing in women’s sports, and hasn’t been afraid to say so. For that, of course, she’s been demonized and called a transphobe. She’s tried to decide about this issue based on science and not ideology; Wikipedia quotes her views from a BBC broadcast in 2019.

“The way I started this journey, I just wanted to see if there are any big surprises, any misconceptions that I had.

And what I think I have come to realise, the biggest thing for me, is just that the level of difficulty that trans people go through cannot be underestimated. The fight for equality and recognition is just huge. That being said, still, for me, the most important thing in sports… and you have to remember, trans rights and elite sports are two different things, although of course they are connected. What’s the right way to set rules so that everybody feels like they have a fighting chance? It feels to me that it is impossible to come to any real conclusions or write any meaningful rules until more research is done.

“But for now, I think we need to include as many transgender athletes as possible within elite sports, while keeping it as level a playing field as possible. Look, society has changed so much. Things evolve, things change and maybe I need to evolve, I need to change. The rules certainly need to evolve. If you don’t adapt, you’ve got problems. And so we’ll just keep adapting and try to find a happy way forward.”

These are not the words of a transphobe.

And science—or rather the lack thereof—is the topic of a piece she’s just published in Quillette with Doriane Coleman, identified as “a Professor of Law at Duke Law School, and a former professional track athlete.” Both women therefore have sports cred, and one has legal cred as well.

Before you say you’re not going to read anything in Quillette, realize that the site publishes worthwhile things, and to refuse to read an article because you disagree with other articles on the site seems to me a form of willful ignorance.

This article comes to no decision about the issue, but rather bemoans two things: the lack of science that might enable us to decide the circumstances under which transwomen (biological men who identify as women, and usually have had hormonal and surgical intervention to “transition”) should be allowed to compete in women’s sports.

Second, the authors decry the International Olympic Committee’s (IOC’s) failure to take a lead in helping with these difficult issues. The IOC used to say that a transwoman could compete in women’s Olympics if they maintained a level of circulating testosterone below 10 nanomoles per liter for 12 months.

Recent research, however, has shown that this by no means levels the playing field (and “leveling” is itself a  contentious issue). First, 10 nmoles/liter is several times higher than the average titer of the hormone in biological women. Second, a year isn’t long enough. I’ve discussed research showing that even with a level below that, maintained via hormone therapy, a transwoman can retain athletic advantages over two years or longer. Most important, if you transition after puberty, the muscular and skeletal changes that accompany male puberty will stay with you for years and years, giving you a near-permanent advantage over biological women in sports.

While some say that this is a non-issue because transwomen are very rare, you have to realize that the exponential increase in the number of women in this genre will make the problem increasingly common in coming years.  It’s already subject to a lawsuit in Connecticut (where high school athletes just have to identify as women, without medical intervention, to compete as women), and we have the recent case of Lia Thomas , who competed as a male swimmer for three years at Penn, and then, after transitioning to female, suddenly broke all kinds of records. 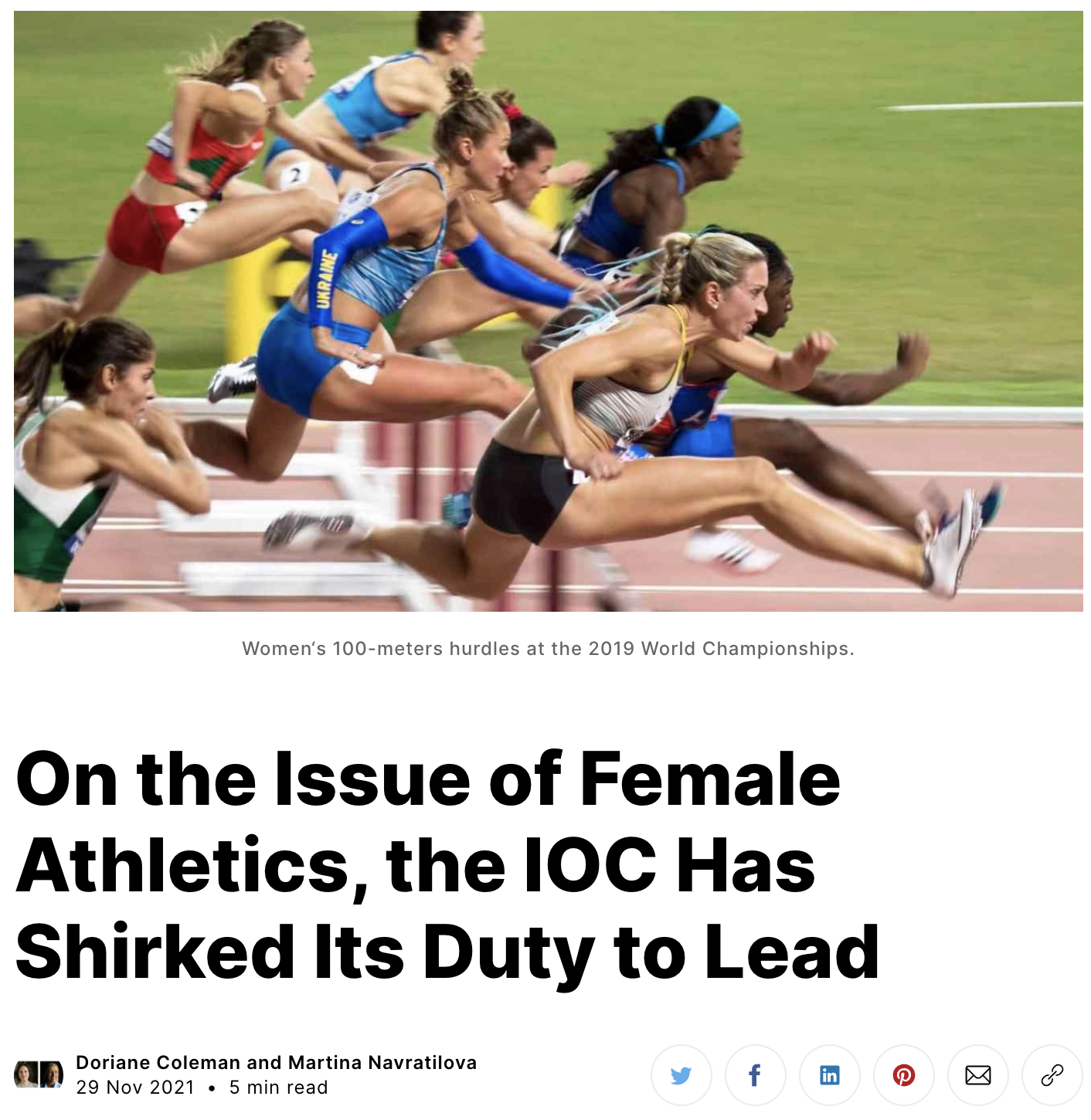 What happened is that the IOC has abandoned its previous hormone-based rule in favor of “guidelines” that give no guidance at all.  Coleman and Navratilova see both good and bad in this, but mostly bad, as it leaves us in limbo:

Last week, the Swiss-based International Olympic Committee (IOC) issued updated, non-binding guidance in regard to the inclusion of transgender women and intersex athletes in the female category in elite competitive sports. This IOC Framework on Fairness, Inclusion, and Non-Discrimination on the Basis of Gender Identity and Sex Variations is presented as a means to balance, on the one side, the right of every person to “practice sport without discrimination and in a way that respects their health, safety, and dignity” with, on the other, the need to protect “the credibility of competitive sport” by ensuring “no athlete has an unfair and disproportionate advantage over the rest.” Although the included principles were drafted “with the specific needs of high-level organized sports competitions in mind,” the IOC also urges that they be “promoted and defended at all levels of sport.”

The new framework contains some welcome elements. Most significantly: It affirms that fairness to the female field remains central to the category’s eligibility standards, and that establishing fairness is a matter of “evidence-based,” “robust,” and “peer-reviewed” scientific research. The principles also serve to encourage as much inclusion as possible within evidence-based bounds, a goal we wholeheartedly support. And the framework “replaces and updates” the 2015 IOC Consensus on Sex Reassignment and Hyperandrogenism, disliked by almost all stakeholders, which requires transgender women to suppress testosterone levels in their blood to below 10 nanomoles per liter for 12 months before they are eligible to compete in the female category.

The bad news (I’ve put the new guideline in bold):

Nevertheless, the new framework is flawed in at least three respects—flaws that the IOC must address if the organization is to demonstrate real leadership in this area. Until then, as others have emphasized, it will be playing catchup with international sports federations; absent proper IOC guidance, the latter will continue to set eligibility rules on their own initiative.

Firstly, while the IOC was correct to acknowledge that its under-10 rule was not fit for purpose, its vaguely worded replacement—the stipulation that an athlete shall not have an “advantage that disproportionately exceeds other advantages that exist at elite-level competition”—is effectively standardless, making it a litigator’s dream and an administrator’s nightmare. By its terms, every eligibility decision is subject to challenge by an excluded athlete, on the grounds that their governing sports federation can’t or hasn’t established that the performance boost they get from their male sex-linked traits “disproportionately exceeds” the boost that an exceptional female athlete gets from non-sex-linked traits such as flipper-feet or fast-twitch muscle fibers.

I won’t go into the other problems, which you can read for yourself, but they include the observation that athletes like Katie Ledecky or Simone Biles, who are biological females but perform “disproportionately over other competitors” could violate the rules. Well, we might ignore that, but Coleman and Navratiolva point out that mention of sex is nearly completely missing from the new IOC standards, which means, of course, that biological women might be excluded.

Further, how long do we have to wait for “proof of the obvious when it comes to genetic males ‘consistently’ outperforming genetic females in a ‘specific sport, discipline, or event'”? This means that just a simple declaration that your gender is female, given that you were born as a biological male, isn’t good enough. No, we need data to set standards.

And this is the issue I have, for what data can we collect that will enable us to set thresholds for transwomen to compete against biological women?  If you think about it, ideally you would like the transwoman asking to compete to have the same athletic capacities she would have had she been born a biological women. But we can never know that. All we can know is how the transwoman does now, and how can we judge that she has been sufficiently “handicapped” by the regulations that her competition is fair? Remember how difficult it is to even do the science to see what advantage puberty confers to a male who transitions later: there are so few of these individuals who have been subject to study!

I haven’t pondered this issue forever, but I’ve thought about it quite a bit, and I’ve concluded that the science for which Coleman and Navratilova are waiting will never come. This is a philosophical and not a scientific problem, and it needs to be addressed now.

Readers, in the past, have offered two solutions:

a.) Have two categories for competition: “male and female”, as before, but transwomen cannot compete in  the “female” class Transmales, I presume, could be allowed to compete with biological males, as they are disadvantaged to begin with.

b.) Have three categories for competititon: “male, female, and other”. Again, one might allow transmen to compete against biological men.

I have nothing to offer about which alternative is better, but until the “other” class is constructed, or some unknown variety of science + philosophy can properly define a class of transwomen who could compete “fairly”, I favor not allowing transwomen to compete against biological women.  Although those in favor of transwomen competing with biological women (like the ACLU), even without treatment, sell their stand as promoting “fairness”, what about fairness to the biological women who lack the advantage of being born male? How do we weigh the fairnesses? Is disadvantaging 100 women justified by advantaging one transwoman?

I have no idea. This is one for philosophers to ponder, and instead of sticking in their ivory tower, some philosophers should be tackling real-world problems like this one. Believe me, it’s only going to get more pressing.

69 thoughts on “Coleman and Navratilova on transwomen in sports: The International Olympic Committee has failed its mission”