I suppose it was inevitable that “invasive” species—species that take over a new area, often far from their native habitat—would be compared by the “progressive” Left to human immigrants, and thus the impact of these species minimized or even lauded. That’s the conclusion you can draw from the headline at the uber-woke Vox website below.

Actually, the article isn’t all that bad, as it does point out that some invasive species destroy ecosystems and must be controlled; other species are moving due to climate change; draws a distinction between true invasives and those deliberately introduced (see Wikipedia’s list of 100 of the World’s Worst Invasive Alien Species; the name “alien will alienate many here, lacking only the adjective “illegal” to enrage the woke); calls attention to the cruel way many invaders are destroyed (poisons can cause an agonizing death), and raises moral issues that should be considered (how do we trade off the death of sentient animals, or nonsentient plants, against native habitat and wildlife)? Those are all things to consider.

But the tenor of the article is one of equating human immigrants with invading species. As a biologist, I admit my biases that when trading off an invader that destroys native species and ecosystems, I give precedence to the natives. Each extinct species is a book that tells us not only about its ancestry, but also can impart fascinating facts about biology. Think of the Hawaiian Islands, where 95 out of the 142 endemic bird species (those found nowhere else) have gone extinct, not just because of habitat damage but because of introduced predators like rats and mongooses who destroy eggs, or feral pigs that destroy habitat. My solution would be, if possible, to get rid of the predators and pigs (as humanely as possible) and try to stem habitat loss.  Problems like this exist all over the world, and unless you have no appreciation for nature at all, you must think about invasion vs. conservation.

I have to say, though, that although the Vox article gives lip service to some truly damaging invasive species (e.g., cats and foxes that kill Australian marsupials), they tend to downplay many cases, like the interbreeding of coyotes with endangered red wolves (see below), my impression is that the article is written by a Leftist who favors open borders for the U.S. But of course the most invasive species of all, and the greatest danger to native species, is Homo sapiens.

Read and judge; you might take issue with my claims above.

As I said, the article isn’t as bad as it could be, but that’s not saying much when it comes to Vox.  Here’s a list of sentences and phrases where author Bolotnikova explicitly use the human/invasive species analogy:

For example, invasives can be considered a threat not only by killing or outcompeting native species but also by mating with them. To protect the “genetic integrity” of species, conservationists often go to extraordinary lengths to prevent animals from hybridizing, environmental writer Emma Marris points out in her book Wild Souls: Freedom and Flourishing in the Non-Human World. Consider the effort in North Carolina to prevent coyotes from breeding with endangered red wolves, which bears uncomfortable parallels to Western preoccupations with racial purity that only recently went out of fashion.

Good Lord! Only those who are looking for offense would find these “parallels”. Wolves and coyotes are different biological species, for one thing.

. . .That’s why some scientists look askance at the influence of invasion biology and argue that the field has a baked-in, nativist bias on documenting negative consequences of introduced species and preserving nature as it is. Invasion biology is like epidemiology, the study of disease spread, biologists Matthew Chew and Scott Carroll wrote in a widely read opinion piece a decade ago, in that it is “a discipline explicitly devoted to destroying that which it studies.”

Historically, the term has erroneously expanded to the idea of, “‘If you’re not from here, then you are most likely going to be invasive,’” Sonia Shah, author of The Next Great Migration: The Beauty and Terror of Life on the Move, said on a June 2021 episode of Unexplainable, Vox’s science-mysteries podcast. Conservation policies have been crafted around the idea that if something is not from “here” — however we define that — “then it is likely to become invasive, and therefore we should repel it even before it causes any actual damage,” as Shah says, which is part of the nativist bent that pervades ecological management.

Now these are uncomfortable parallels, but they’re between human immigration and animal invasions (animals are often moved deliberately by humans). This could—and may well have intended to—be an argument for letting immigrants go wherever they want. But wait! There’s more!:

. . .What’s more, the very notion of “invasion” draws on a war metaphor, and media narratives about non-native species are remarkably similar to those describing enemy armies or immigrants. For example, a recent news story in the Guardian about armadillos “besieging” North Carolina described them as “pests” and “freakish.” It also gawked at the animal’s “booming reproduction rate,” an allegation that, not coincidentally, is leveled against human migrants.

Well, we use invasion and war as metaphors for disease to. Is the “battle against covid” an alt-right slur on immigration?

We always have to be wary of teaching “indigenous knowledge” as equivalent to Western science. (New Zealand is having a real issue with that right now.) Here’s a confusing paragraph about that:

Indigenous knowledge is increasingly being recognized as essential to conservation, write Nicholas Reo and Laura Ogden — Dartmouth University professors of Indigenous environmental studies and anthropology, respectively — in an ethnographic study of Anishinaabe perspectives on invasive species. (The Anishinaabe are a group of culturally related First Nations peoples in the Great Lakes region of Canada and the US.) Anishinaabe ideas, Reo and Ogden found, reflect a worldview that sees animals and plants as belonging to nations with their own purposes and believes people have the responsibility to find the reason for a species’ migration. The authors’ sources recognized parallels between the extermination of species deemed invasive and the dark history of colonial violence against Indigenous peoples. The interviews “helped me recognize the ways in which different philosophies of the world shape our ethical response to change,” Ogden says.

But do the Anishinaabe try to find out the reasons for species migrations? If they do, then they have to use modern science. If they don’t, then this is irrelevant to the issue of conservation.

Finally, the article couldn’t resist using the word “diaspora”, which is usually applied to Jews but refers to any people dispersed widely from where they originally lived. This is the first time I’ve seen it applied to animals:

In Tierra del Fuego, at the tip of Chile and Argentina, a particularly dramatic novel ecosystem is taking shape. In 1946, beavers were introduced there in a futile attempt to create a fur industry. Instead, the animals proliferated and munched down the region’s Nothofagus — southern beech — forests, creating dams and ponds. “They are these miraculous world builders,” says Ogden, who wrote an essay imagining the beavers not as invaders, but as a diaspora. (Beavers have also been a boon for ducks and other marine species.) The invasive species paradigm, Ogden adds, is devoid of nuance, history, and politics; she prefers a concept that gives expression to the moral complexity of the beavers’ presence in South America, as well as the fact that they had no choice in being moved there.

Ecologist Dan Simberloff, however, deems this invasion a “disaster” for the native habitat.

As I said, this article is not without merit. It raises questions about invasive species (do they really damage native habitat or fauna?) that laypeople may not have considered, but, believe me, biologists have considered. But there are moral questions that biologists haven’t considered: is it worth the lives of 10,000 beavers, for instance, to save the Patagonian forests? Biologists say “yes”, for we’ll always have beavers, but Patagonian forests (or Hawaiian birds), once gone, are gone for good.  (Yes, the beavers should be exterminated humanely, which I suppose the Vox article would consider “genocide”.)

But in general, this article, conflating the problem of human immigration and crossing of politically determined borders with the invasion of animals and plants into novel areas, is a good example of the naturalistic fallacy. We learn nothing about how to deal with human immigration from studying invasive species. Not only that, but if you want to be more accurate in your analogy, you’d liken invasive species not to Central Americans crowded at the American border, but to Cortéz genocidal extinction of the Aztecs.  After all, human immigrants don’t wipe out the population into which they meld.

Here are four extinct species once on Oahu, one of the Hawaiian islands: 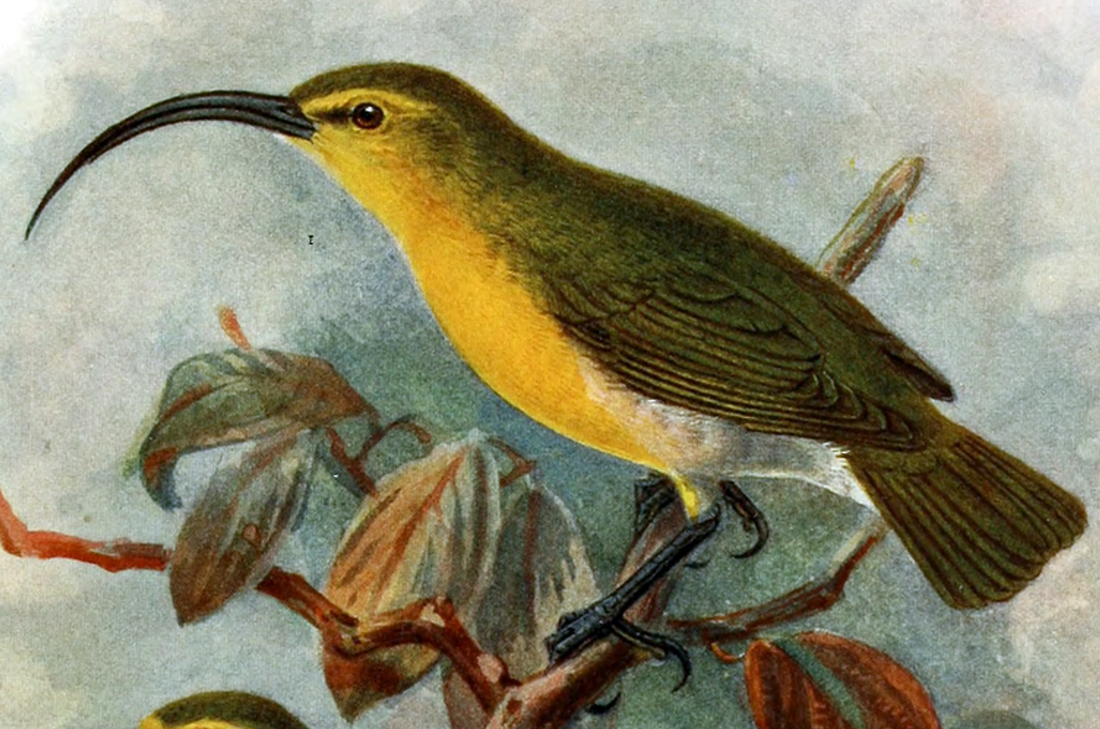 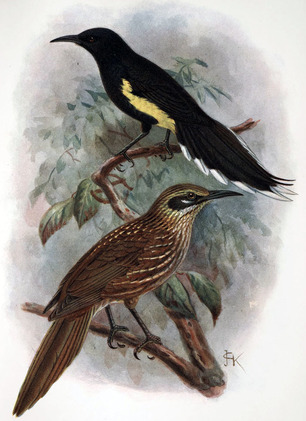 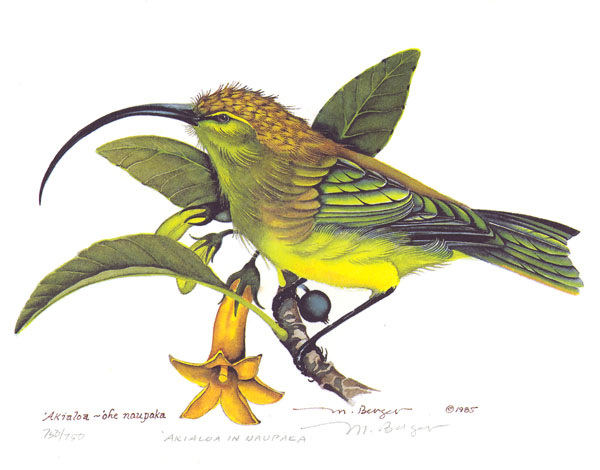 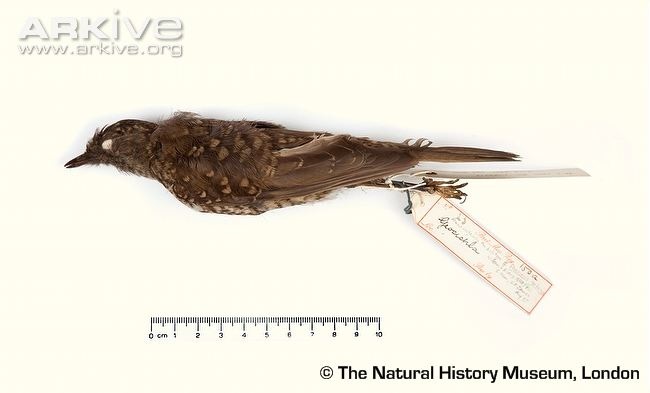