My beloved Ph.D. advisor and role model, Dick Lewontin, died on July 4 of this year at age 92, three days after his wife had passed away. I was glad that he lived so long, for he influenced many people (see below), but of course you miss someone like that no matter how long they lived.  Shortly after his death I wrote a memorial  on this website; it was too personal to be put in a journal, and I’ve refused offers to write any further obituaries. That would be like writing an obituary for one’s parent, and the last thing I wanted to do was give a canned summary of his accomplishments.

As I said, Dick’s intelligence and work had a huge influence—not just on evolution and genetics, but on the philosophy of science. When I was in his lab, there was always a philosopher or two visiting or in residence, for Dick appreciated philosophy and was willing to host science-friendly philosophers and historians.  Now a number of them, along with a couple of scientists, have written memorials to Dick in an issue of the journal Biological Theory, and it’s free. Click on the screenshot below, or find the pdf here.

Below we have two scientists (Newman and Hartl), two historians of science (Beatty and Paul) and the rest philosophers of science, some of whom have made contributions to pure science (e.g., Kitcher and Sarkar). All of them harbored a deep appreciation and respect for Dick. What I learned from this piece was a great deal about Lewontin’s contributions to the philosophy of science, so this was a valuable read for me. And if you want to know more about Dick, read on:

I’ll give just one anecdote from Dick’s colleague Dan Hartl; it’s about Lewontin’s involvement at the onset of the government’s using forensic DNA in criminal cases, something that I was independently caught up in. Like Dick, I felt that the government often played fast and loose with the data to obtain convictions at any price. (Most of the problems have since been recitified.) Godfrey-Smith:

For some years after our meeting in Minnesota, Dick tilted at his windmills and me at mine, and we seemingly went our separate ways. But then, one day early in 1991, he called me to suggest that we should write a paper together on shortcomings of DNA typing as it was then being practiced. The story is told in detail in the New York Times of December 20, 1991 (Kolata 1991). In brief, the story is that Lewontin and I had written and submitted an article to Science disputing the notion that DNA fingerprinting could identify a suspect with only a negligible chance of error. Shortly thereafter I got a call from a federal prosecutor in the U.S. Department of Justice, who told me that he felt that publication of the paper would be a disservice to the system of justice in the United States. I told Lewontin about this call, and he sent off a scathing letter to the prosecutor saying, “When someone who is an official in the Department of Justice Criminal Division Strike Force telephones a private citizen to request an action the citizen would not ordinarily take, then a form of intimidation has been used.”

The prosecutor then called me, wanting to know whether I had recorded his previous call. (I had not, as a matter of principle.) He then asked if I had felt intimidated by his earlier call. I told him that his call had stunned and chilled me, and that he certainly did make me feel intimidated.

While all this was unfolding, the Science paper had been reviewed and accepted. But then the editor interjected himself. He said he wanted us to soften our conclusions or withdraw the paper and resubmit it as a short opinion piece. Lewontin flatly refused. He later told his interviewer: “We finally did make some changes, against my better judgment” (Kolata 1991).

The man had no fear.

Here’s a picture of Dick carrying in the birthday cake at my 60th birthday celebration in Jamaica Plain, Massachusetts—a suburb of Boston. It was a festive and bibulous occasion, and my cake was shaped like a cat. 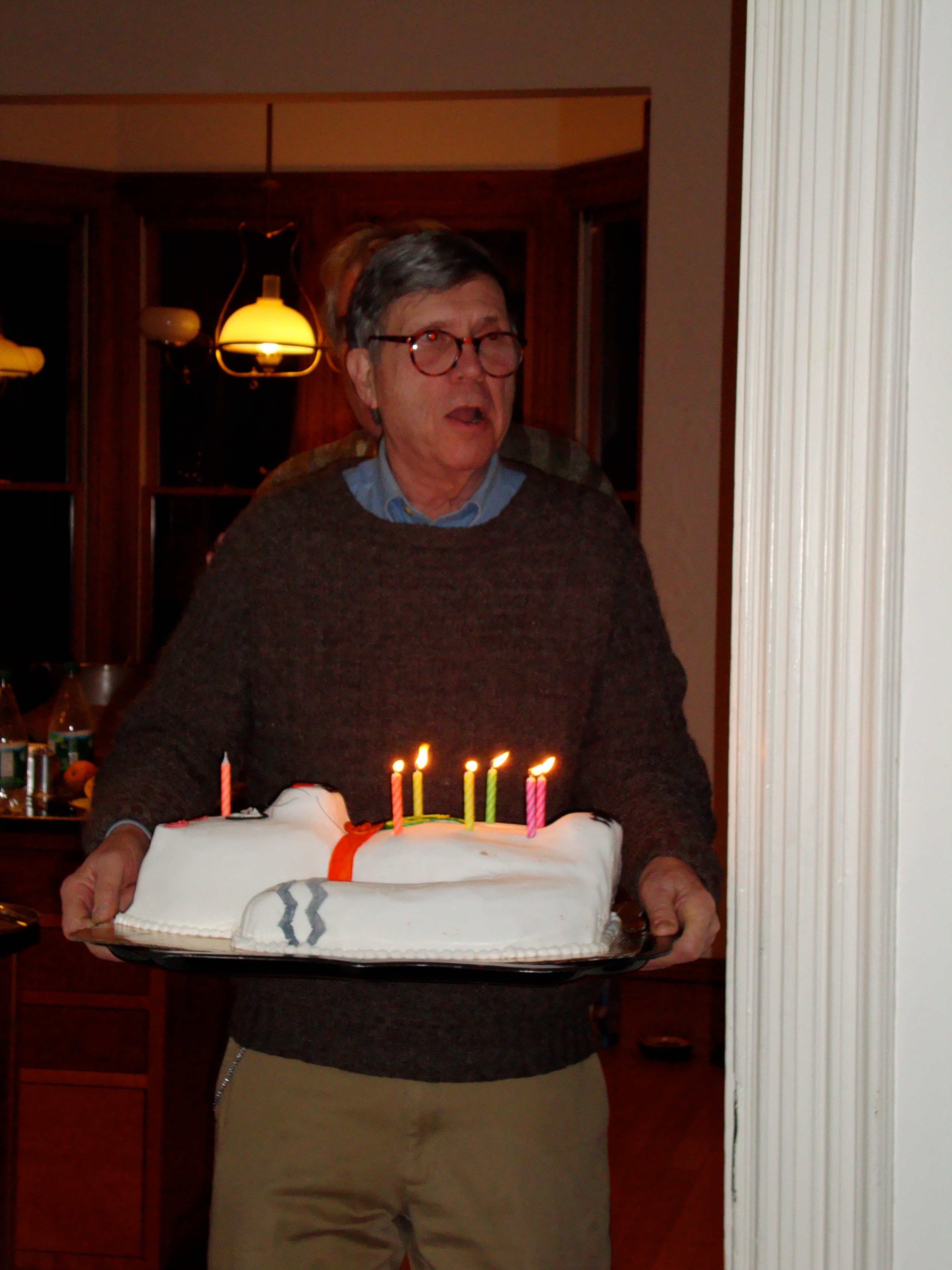