I don’t particularly have a dog in this fight, as I don’t really object to people choosing their pronouns so long as they don’t choose their biological sex. But the article does stand as a report on both the French character as well as the spread of woke language to Europe—and on Europeans’ fears that they’re becoming like Americans.

Again from the NYT, we hear of a new French pronoun, “iel”, which of course is a combination of “elle” (she) and il (he). As you probably know, the French are very protective of their language—in fact, there is a whole outfit, the Académie française, to maintain the purity of the French language. I know of no other country that has such a thing. And, of course, the Académie doesn’t much like “iel”, which is used to express either someone’s “binary” gender—like “hir” in the U.S.—or to refer to a person of any gender to avoid misgendering.

Read about the kerfuffle by clicking on the screenshot: 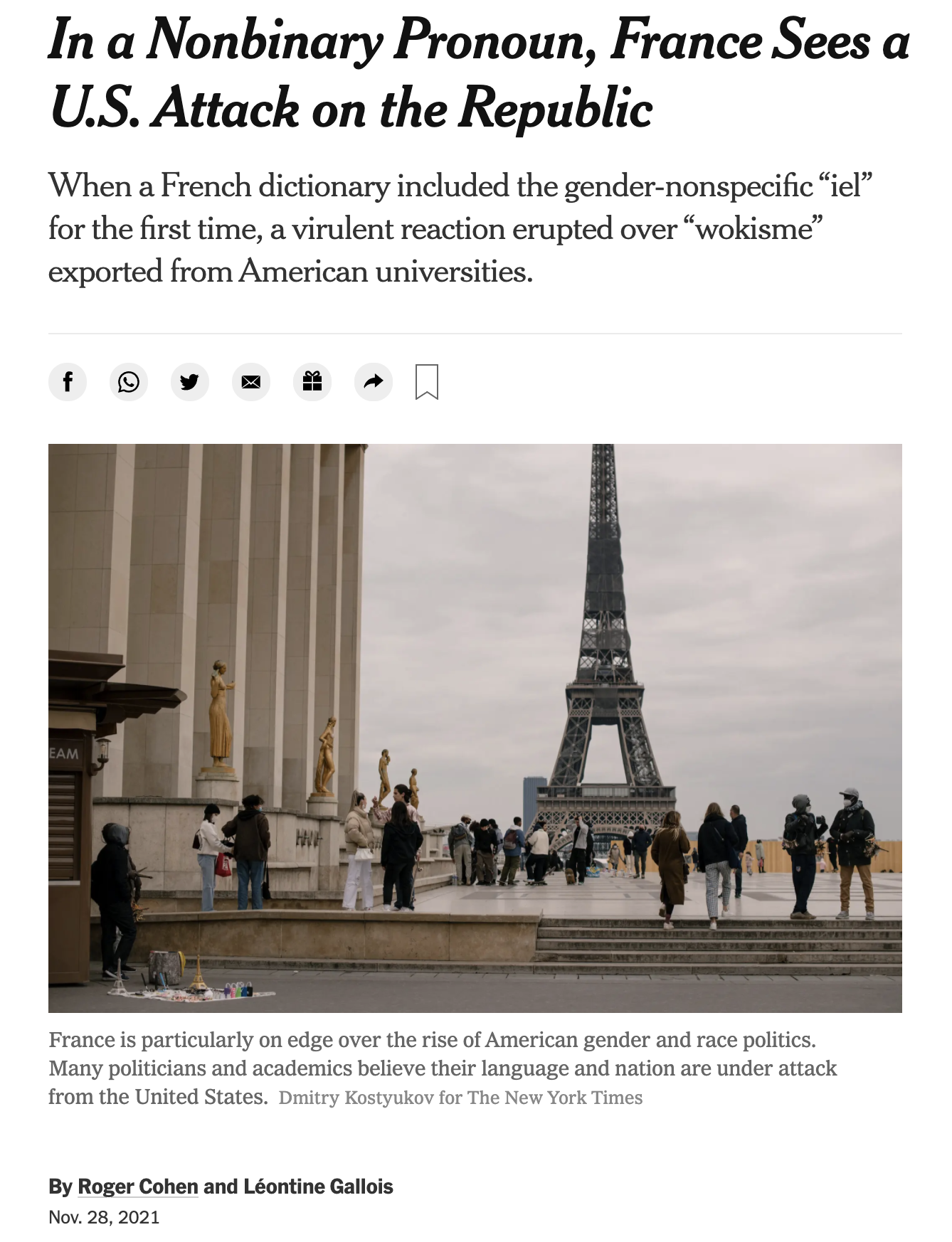 Perhaps France was always going to have a hard time with nonbinary pronouns. Its language is intensely gender-specific and fiercely protected by august authorities. Still, the furor provoked by a prominent dictionary’s inclusion of the pronoun “iel” has been remarkably virulent.

Le Petit Robert, rivaled only by the Larousse in linguistic authority, chose to add “iel” — a gender-neutral merging of the masculine “il” (he) and the feminine “elle” (she) — to its latest online edition. Jean-Michel Blanquer, the education minister, was not amused.

“You must not manipulate the French language, whatever the cause,” he said, expressing support for the view that “iel” was an expression of “wokisme.”

Mr. Blanquer is seemingly convinced of a sweeping American “woke” assault on France aimed at spreading racial and gender discord over French universalism. Last month he told the daily Le Monde that a backlash against what he called woke ideology was the main factor in the 2016 victory of Donald J. Trump.

In this instance, however, he was joined by Brigitte Macron, the first lady. “There are two pronouns: he and she,” she declared. “Our language is beautiful. And two pronouns are appropriate.”

The Robert defines “iel” (pronounced roughly “yell”) as “a third person subject pronoun in the singular and plur used to evoke a person of any gender.

Macron’s decrying “iel” is like Jill Biden coming out against the use of any pronoun except “he” or “she”, which of course would lead to her immediate cancellation. But France isn’t as woke, or as resistant to language change, as the U.S. Nevertheless, some gender-nonconforming French people are angry at her pronouncement. Here’s one:

Lilian Delhomme, 24, a gender-nonconforming student of international affairs at the University of Paris 8 who has been using the pronoun “iel” for about a year, was appalled by Ms. Macron’s statement.

“This for me was very violent,” Delhomme said in an interview.

I see they’re already starting to use the term “violence” for certain words. I don’t mind Delhomme choosing her pronoun, but she can’t conflate a pronouncement from the wife of the head of state for a punch in the face. At any rate, Delhomme has been frustrated because although “iel” has declared her preference, fellow students keep using “il”.

Part of the reason for the revival of new pronouns is the male-predominant structure of the language:

For some time, a movement for “inclusive writing” has battled the linguistic establishment in France. It is broadly an attempt to wean the French language of its male bias, including the rule that when it comes to the choice of pronouns for groups of women and men, the male form takes precedence over the female; and when it comes to adjectives describing mixed gatherings, they take the masculine form.

The Académie rebuffed such attempts earlier this year. Its secretary-in-perpetuity, Hélène Carrère d’Encausse, said that inclusive writing, even if it seemed to bolster a movement against sexist discrimination, “is not only counterproductive for that cause but harmful to the practice and intelligibility of the French language.”

And so it goes. I suggest that the Germans start considering using “sier” to signify the melding of “er” (he) and “sie” (she).