Sweet Ceiling Cat in a chicken basket! As Greg and I have written several times, the New York Times has in the last couple of years become very soft on spirituality, woo, and the occult, especially on astrology. Well, it’s gone extra far this time by publishing a very long profile in its “Style” section of Carissa Schumacher, a medium/spiritualist/channeler from Los Angeles. That’s big publicity!

Schumacher is a full-blown loon, and yet she’s accumulated a stable of wealthy and famous Hollywood-ites who pay her big bucks for “sessions.” Besides channeling Jesus (she’s got a contract to publish three books containing the words of the Son of God), she’ll channel anybody’s relatives—for a fee, of course.

The thing is, the whole article is basically a worshipful piece on Schumacher and her vocal emissions, and the only pushback consists of two quotes from the admirable Susan Gerbic, a columnist for Skeptical Inquirer, experienced debunker, and head of Guerrilla Skeptics on Wikipedia.

Since there are a gazillion mediums in the world, all of them bogus, I fail to see why the paper is highlighting this one, and, in fact, their publicity will surely bring Schumacher a lot more business.

The piece begins with a gathering at Schumacher’s estate, where a lot of big names show up to hear the medium channel Jesus (she says “Yeshua” because she think it sounds weird to say “I’m channeling Jesus!”). It’s surprising who’s been duped by this woman, but, as we know, the public has an endless appetite for confirmation that there’s life after death. The dead speaking through Schumacher gives them comfort and reassurance. From the paper:

Last Saturday night, a group gathered at the Flamingo Estate in the Eagle Rock neighborhood of Los Angeles to meet the spiritual adviser Carissa Schumacher.

At the front of an open-air room, a seat awaited Ms. Schumacher under a large floral arch. After guests, including the actresses Jennifer Aniston and Uma Thurman, filled the rows of chairs, others moved to the floor. Andie MacDowell reclined on a rug among a heap of pillows. Ms. Schumacher was supposed to appear at 8:30 p.m. A gospel choir sang while everyone sat around and glanced at Ms. Schumacher’s empty chair and at each other.

Since 2010, Ms. Schumacher has worked as a medium, meaning someone who receives messages from people who have died. She doesn’t have a website and is often booked months in advance. Her prices are another obstacle, with sessions priced at $1,111 per hour. (She likes the synchronicity of the number.)

In late 2019, just as the world was on the precipice of a plague of biblical proportions, Ms. Schumacher said she began channeling Yeshua, a.k.a. Jesus Christ. Transcribed recordings of some of those sessions appear in a new book, “The Freedom Transmissions,” out Nov. 30.

. . . The party was for the book, but it was also a chance for her clients, many of whom hadn’t experienced the Yeshua channeling, to see what it was all about. Maybe she would channel him at the party. No one was quite sure.

Well, nobody’s claimed that stars like McDowell, Thurman, and Aniston were the sharpest knives in the drawer, but there are others who pay the “synchronicity fee” as well, including Brad Pitt and Rooney Mara.  After a long wait, Clarissa shows up:

Ms. Schumacher finally appeared a little after 9:30 p.m. A petite woman of 39, she walked tentatively toward the front of the room, removed her metallic gold heels, and sat cross-legged beneath the giant floral wreath, which now looked like a halo. The wall behind her was covered in photos of rainbows.

“We love you so much!” someone screamed. She put her hands together in prayer and nodded to a few fans around the room. “For those of you that don’t know me, I’m Carissa,” she said. “I knew my whole life that I would be a channel for Yeshua.”

A photo of the session (sadly, the Son of Man refused to be channeled that night). Schumacher, with her white robe, reminds me of another religious huckster in L.A.: Aimee Semple McPherson: 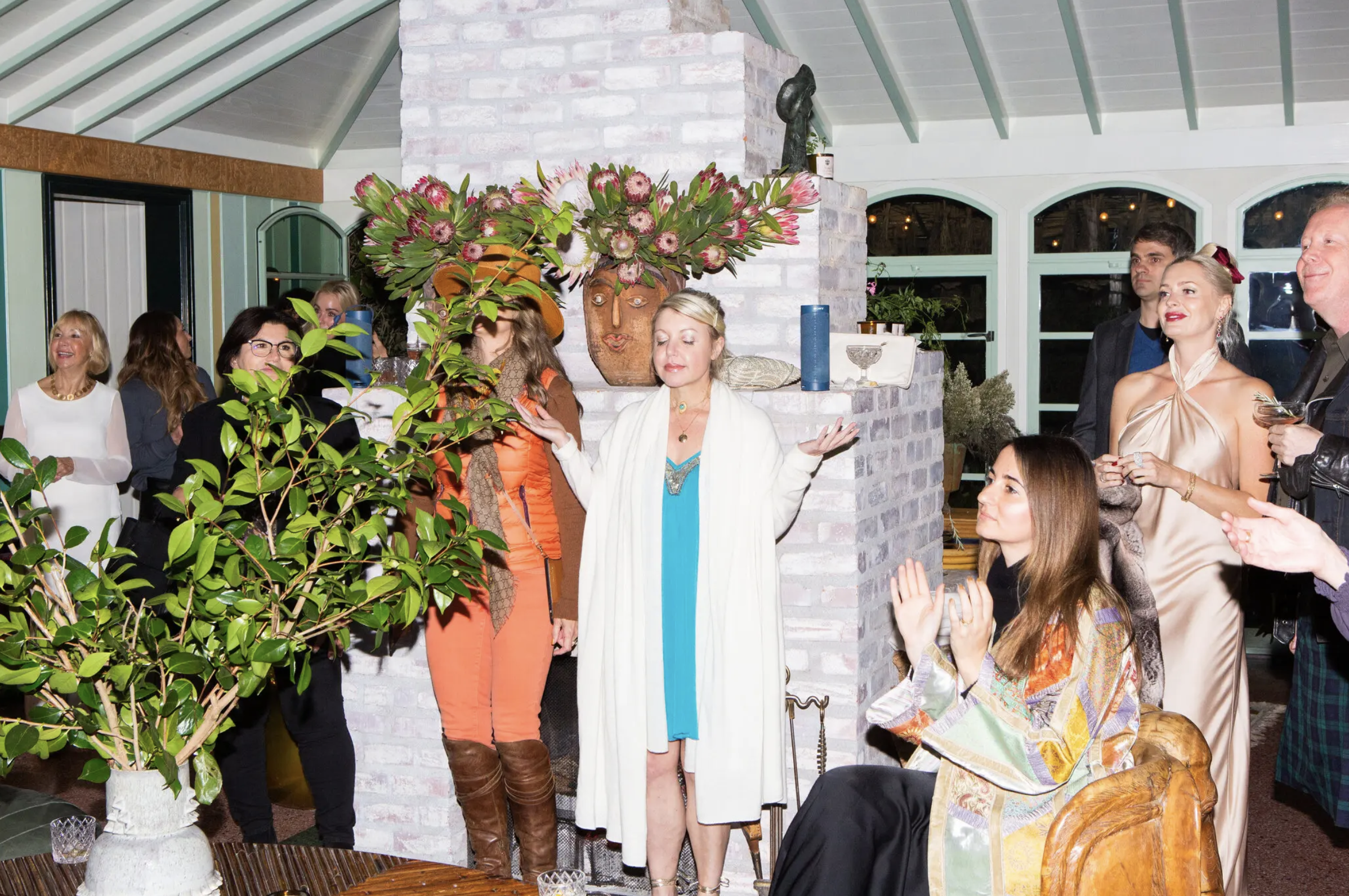 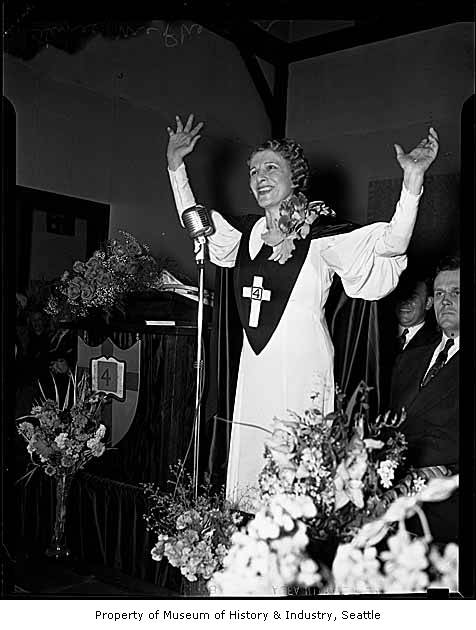 Now how did Sister Carissa come to be the megaphone for Jesus? The NYT explains:

Her naturopathic doctor suggested she meet Danielle Gibbons, who lives in southern Oregon and says she has been channeling the Virgin Mary since 1994. (She has a YouTube channel.) In 2011, Ms. Schumacher attended Ms. Gibbons’s workshop in Los Angeles, and subsequently booked private sessions with her roughly once a year. Ms. Gibbons told me that she didn’t know Ms. Schumacher was a Yeshua channel until much later, in 2019.

Ms. Schumacher said that she spent the next decade preparing her channel for Yeshua. She meditated daily, cut out sugar and caffeine, and limited her diet to five foods: broccoli, cauliflower, turkey, chicken and watermelon. “If someone’s channel is diluted,” she said, “there’s a kind of film or gunk that the energy gets stuck in and can’t push through.”

That’s actually pretty funny, but the NYT presents it without any sarcasm. Perhaps that was their aim, for somehow I don’t think the purpose of this big article was to show that mediums are frauds. It might well be to highlight her bogus book.

What does Jesus say? It turns out that he produces only bromides (surprise!) and doesn’t give specific details about his life. He also has an accent (my emphasis):

Ms. Aniston left that journey early, and the next day Ms. Schumacher said that Yeshua spoke through her for the first time. Those who’ve witnessed it since then say that Ms. Schumacher’s voice and body change. Yeshua’s voice is deeper, more measured, and has a slight British accent.

LOL! I can hear it now: “My dear chaps, you can arrive at God only through me.” And if she’s really channeling Jesus, why isn’t she speaking Hebrew?

There’s more and it’s pretty funny as well, with a toilet metaphor:

When I asked what it’s like to channel Yeshua, Ms. Schumacher said, “It feels like I’m being flushed down a toilet. I go whoosh! And he comes up. I breathe a lot. My body shakes.” On journeys, someone is tasked with holding down her ankles. Coming back into her body is hard, she said. “It’s a little bit like … womp, womp.”

. . . In the fall of 2020, Ms. Schumacher emailed recordings of Yeshua transmissions to her clients. Among them was Jennifer Rudolph Walsh, who was referred to Ms. Schumacher after leaving her longtime job running the literary department at WME. She thought Yeshua’s teachings could be a book and connected Ms. Schumacher with the publisher of Harper One, which will release “The Freedom Transmissions.”

Though there’s some Christian iconography in it — references to the crucifixion, for instance — the rest is a more neutral smorgasbord of divine power surrender, Buddhism, repairing the fragmented self after trauma, and accessing “the God self,” a reference to Carl Jung.

I asked Ms. Rudolph Walsh if she believed that Yeshua was truly speaking through Ms. Schumacher. “To me, it doesn’t matter,” she said. “It matters what is being said. But do I personally believe she’s channeling Yeshua? Yes, I do.”

Now perhaps Schumacher really believes that she’s channeling Jesus and the other dead people she speaks for. Perhaps she’s in a self-induced hallucinatory state, but you’d have to be pretty credulous to think that Jesus (if he really existed, and I’m not convinced) would use you as a mouthpiece.

The only two bits of doubt cast on Schumacher, as I said, came from Susan Gerbic:

Susan Gerbic, the founder of Guerrilla Skeptics, a group that conducts sting operations of people she calls “grief vampires,” told me that the invocation of religion was consistent with a psychic’s desire to feel special. “If you are in conversation with dead biblical figures, then that is really special and holds a lot of power,” she said, adding that it also served as a shield against skeptics. “Who’s going to attack someone who’s playing the religion card?”

And this is a gem, especially the part I’ve put in bold:

. . . Later I asked Ms. Gerbic, the psychic skeptic, if she believed there were any legitimate mediums in the world. “I could give you the long answer about how we don’t know all things yet and science does not know everything, but I think you know my answer: It’s all BS,” she wrote in an email. “And the way I know this isn’t because I’ve been doing this for so long, and know many people who have been doing this for so long. But because it is NOT possible to communicate with dead people. They are dead.”

Indeed. They are dead. If you want to test Schumacher as a medium, get someone like the late James Randi to do it. But of course I doubt she’d be tested.

Anyway, Jesus Christ didn’t make a vocal appearance that evening, so Schumacher channeled another person who sings in the Choir Invisible:

Ms. Schumacher decided ultimately that the vibe at the Flamingo Estate wasn’t conducive to channeling Yeshua. (“I am not a go-go-gadget channel,” she told me.) Instead she channeled Kenneth, a guest’s dead father who she said liked fishing and fixing cars. Kenneth’s son, John, wiped his eyes, as did many others in the room. “I’m sorry,” Ms. Schumacher said.

And if you want to read what Jesus supposedly said, well, Harper Collins, through its imprint Harper One, is releasing the book below: notice that Jesus is listed as the main author! (Does he get most of the royalties?) I have little doubt it’ll sell like hotcakes. Everybody wants to know what Jesus has to say! And two sequels are in the offing. 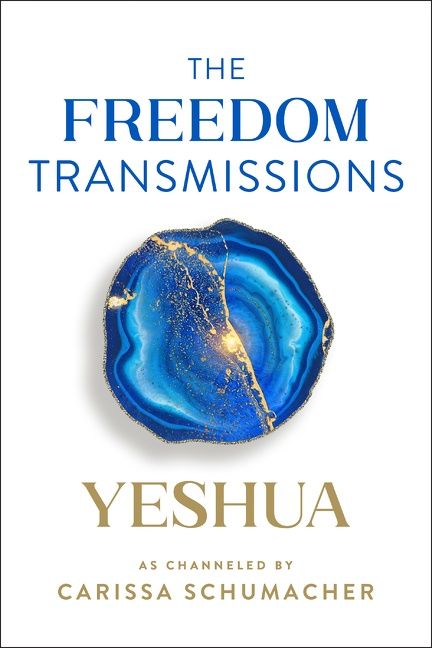 But I remain curious: why did the New York Times profile this woman? It’s like profiling any kind of hokum: reiki therapy, coffee enemas, reading auras, dowsing, and so on. I can’t help but think that the NYT really thinks there may be something to this, and wanted to get in on the story on the ground floor.  Or do the Woke have some kind of penchant for woo? Not that I’ve noticed, but they do practice a kind of religion. 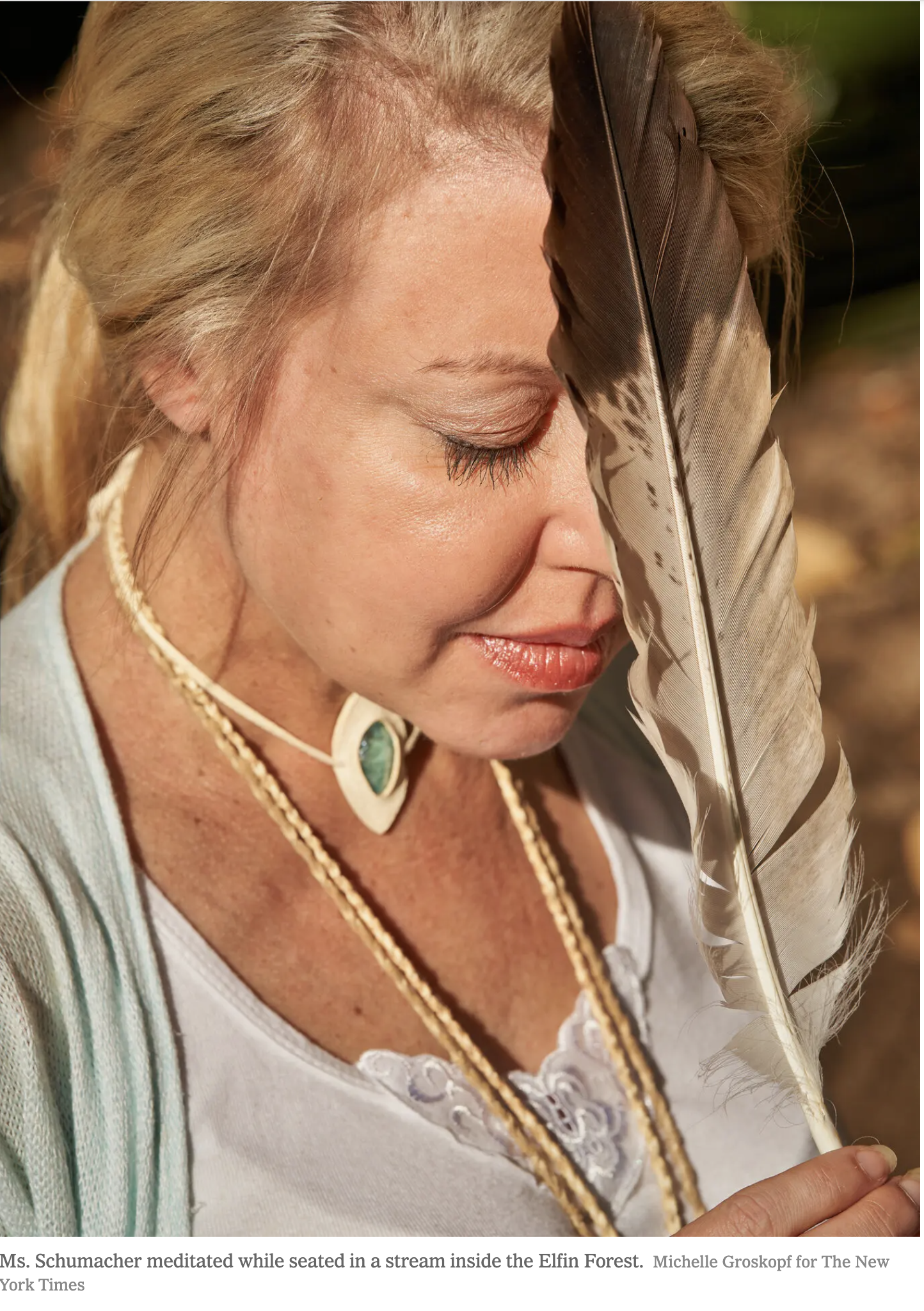 If you have the dosh, you can contact Carissa here.