I knew that Peter Jackson was making a three-part, 8 hour series incorporating never-before-seen Beatles clips, but I didn’t realize that it’s already out.  Yes, it’s on Disney+, but who cares. I’ve liked everything that Jackson directed, and this movie most resembled “They Shall Not Grow Old,” which was great. 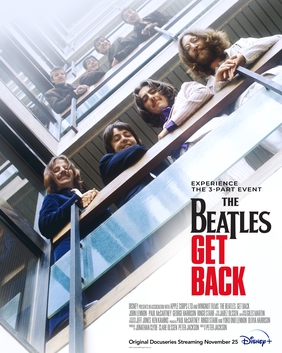 Here’s the trailer, with the YouTube notes below it:

The YouTube notes (there’s also a Wikipedia article which gives the episodes and more information):

Made entirely from never-before-seen, restored footage, it provides the most intimate and honest glimpse into the creative process and relationship between John, Paul, George, and Ringo ever filmed. Be sure to check them both out, and don’t forget to watch “The Beatles: Get Back” when it rolls out over three days, November 25, 26, and 27, 2021, exclusively on Disney+.

Directed by three-time Oscar®-winning filmmaker Peter Jackson (“The Lord of the Rings” trilogy, “They Shall Not Grow Old”), “The Beatles: Get Back” takes audiences back in time to the band’s January 1969 recording sessions, which became a pivotal moment in music history. The docuseries showcases The Beatles’ creative process as they attempt to write 14 new songs in preparation for their first live concert in over two years. Faced with a nearly impossible deadline, the strong bonds of friendship shared by John Lennon, Paul McCartney, George Harrison, and Ringo Starr are put to the test. The docuseries is compiled from nearly 60 hours of unseen footage shot over 21 days, directed by Michael Lindsay-Hogg in 1969, and from more than 150 hours of unheard audio, most of which has been locked in a vault for over half a century. Jackson is the only person in 50 years to have been given access to this Beatles treasure trove, all of which has now been brilliantly restored. What emerges is an unbelievably intimate portrait of The Beatles, showing how, with their backs against the wall, they could still rely on their friendship, good humor, and creative genius. While plans derail and relationships are put to the test, some of the world’s most iconic songs are composed and performed. The docuseries features – for the first time in its entirety – The Beatles’ last live performance as a group, the unforgettable rooftop concert on London’s Savile Row, as well as other songs and classic compositions featured on the band’s final two albums, Abbey Road and Let It Be.

It took Jackson four years to edit the material. Wikipedia adds, “It was created with cooperation from Paul McCartney, Ringo Starr and the widows of John Lennon (Yoko Ono) and George Harrison (Olivia Harrison), as well as music supervisor Giles Martin (son of George Martin and a regular producer of Beatles projects since 2006). In a news release, McCartney said: “I am really happy that Peter has delved into our archives to make a film that shows the truth about the Beatles recording together”, while Starr echoed: “There was hours and hours of us just laughing and playing music, not at all like the Let It Be film that came out [in 1970]. There was a lot of joy and I think Peter will show that.”

I found three short clips from the series on YouTube, which, since I’m a big Beatles fans, really whets my appetite to see the series.  The first one seems to be when George Harrison introduces the song “I Me Mine” to the group:

Rehearsal of “Something in the Way She Moves”. And yes, Yoko is sitting there, and Linda McCartney is taking photos. I don’t think I’ve ever seen the band rehearse, but it’s lovely.

Rehearsal of “Don’t Let Me Down” with Billy Preston on the keyboard.

If anybody’s seen it, please report below.

It’s no secret that I think the Beatles are by far the best rock group that ever was, and ever will be. They could write everything from love songs to hard rockers, and nearly all of it was superb. What rock song today is the equal of “A Day in the Life”, or “In My Life”, or “Blackbird”, or “Strawberry Fields Forever”, not to mention “Yesterday”. (Well, there’s “Octopus’s Garden” and “Maxwell’s Silver Hammer,” but I prefer to think of them as mutations.)

It’s unimaginable to me that such talent could come together more than once, and that, combined with the demise of the genre, means that this is the apogee of rock music.

32 thoughts on “From Peter Jackson’s upcoming movie “Get Back”: Beatles songs come to life”