Well, you’re going to have to rely on two conservative sites for this news.  The first site is The College Fix, a right-wing venue that reports about campus follies, usually of the woke genre. The other is another conservative site, Newsmax.  Together, they report the third and fourth instances I know about of a college administration going beyond the bounds by officially condemning the acquittal of Kyle Rittenhouse. (The previous two colleges were the University of California at Irvine, whose Vice-Chancellor first kvetched about the verdict before apologizing for opening his yap, and The University of Caifornia at Santa Cruz, whose two administrators—the Chancellor and the director of DEI—haven’t retracted their condemnation.) The Fix appears to have gotten its information about Princeton from Newsmax.

UCI and UCSC are very good schools, and both are public. Administrators are not supposed to make public statements about jury verdicts—especially when the verdict might have been correct—lest they chill the speech of the many people who likely took issue with the administrators’ opinion.

Be that as it may, this is all part of universities’ attempts to flaunt their virtue by appearing to take sides with the black protestors in Kenosha who, they think, were allies to the three white people whom Rittenhouse shot.  There is no explanation I can see other than that these universities want to be seen as being “on the right side of history”, in solidarity with the students.

At any rate, both The College Fix and Newsmax report that a dean at a tony private school—none other than Princeton University—sent out an email to students and faculty condemning the verdict and implying that it reeks of racism and white supremacy. The administrator was Amaney Jamal, recently appointed as dean of Princeton University’s School of Public and International Affairs.  Newsmax doesn’t give the full text of her email, but The College Fix does. Here’s the email Jamal reportedly sent out:

Last August, Kyle Rittenhouse shot and killed two protestors and wounded a third in Kenosha, Wisconsin. During his trial, he emotionally broke down on the stand, saying he was acting in self-defense. Today, he was acquitted of all six charges against him, including three of which were homicide related.

My heart feels heavy as I write this. As dean of a School of Public and International Affairs, I believe people have a right to assembly. I also believe that, during events like the protests following the shooting of Jacob Blake, it is the job of formal law enforcement bodies — not individual citizens —to ensure public safety. I fail to comprehend the idea of a minor vigilante carrying a semi-automatic rifle across state lines, killing two people, and being declared innocent by the U.S. justice system. Yesterday’s ruling sets a dangerous precedent.

Rittenhouse is not a racial minority, and some would say this is another example of biases and leniencies embedded within the justice system. That may be true. What we do know without a doubt is there are racial inequities in nearly every strand of the American fabric. Today’s verdict employs me to ask you — our current and future public servants — to investigate our policies and practices within the justice system and beyond. How can we use evidence-based research in pursuit of the public good? What role do we play, and what obligation do we have to serve?

It feels like an immeasurable, daunting task. I’m sure there are days in which you feel like giving up. In those moments, remember: Democracy is not a guarantee. We must always act with our feet, evoke change with action. We must always remain part of the policy solution. People. Policy. Progress. This is the basic order of our work. In between is passion, grit, tenacity. It is our moral duty to support and advance public policy that makes the world better.

Resources are available for our students. Sue Kim, our TigerWell outreach counselor, is available for virtual drop-in visits. Dr. David Campbell from Counseling and Psychological Services will host a virtual space for SPIA students to process the Rittenhouse Trial on Monday, November 22 at 5:00pm ET. …

Note the familiar use of Jamal’s first name, noted previously as a likely tactic for expressing “allyship” with the students.  More important, note how she racializes the event, claiming that Rittenhouse (or the judge or jury) may well have been racially biased (there was a “juror of color” on the Rittenhouse trial). She then moves on to the structural racism of America as a whole, and tells the students what they need to do to fix, which is not only something she should be doing, but also infantilizes the students—as if they don’t know that it would be good if they improved the world. But what if some of them want to become hedge fund managers? It is this call to action that violates Princeton’s policy of free speech, as students should be free from such incitements.  Princeton is not supposed to instill morality and ideology in its students; it’s supposed to teach them things and teach them to think.  Then can then make their own decisions.

Note the offer of counseling and a “virtual space to process the Rittenhouse Trial”.   The students are once again being treated like small children.

Finally, “Amaney” should not be questioning a verdict that she blatantly calls a “dangerous precedent”. Precedent for what? Apparently for letting white supremacists off the hook. She wasn’t in the courtroom, she wasn’t on the jury, and she apparently doesn’t understand that the law was applied as it was written.  She also doesn’t know that Rittenhouse did not carry a semi-automatic rifle across state lines. Perhaps owning one (which was legal) shouldn’t be permitted (which is what I believe), but then she should go after the gun laws.

The two reports are at the screenshots below, and I’ll add any useful information they provide: 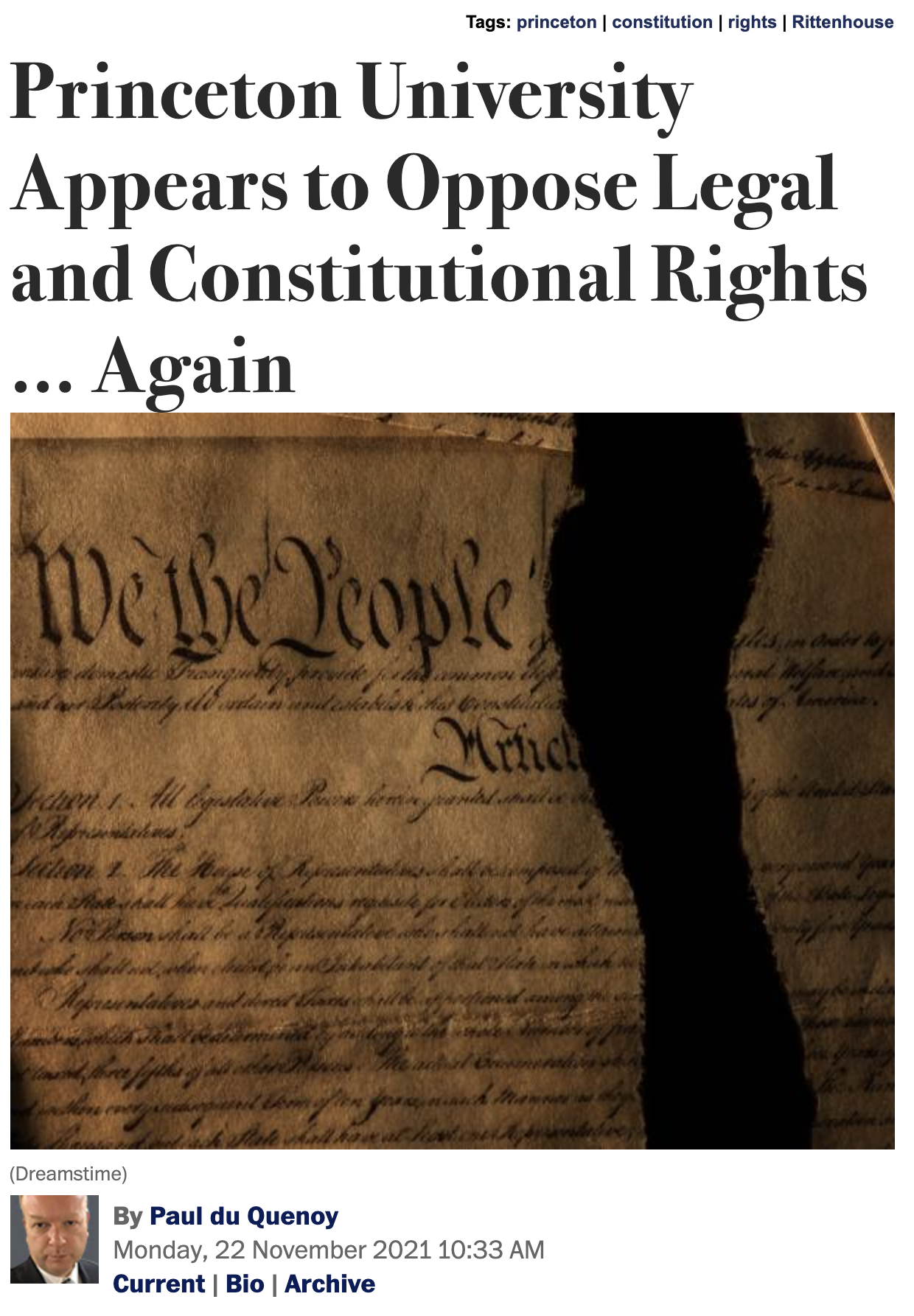 du Quenoy has a few questions for Dean Jamal.

Does she believe that Rittenhouse was “declared innocent by the U.S. justice system,” or did she “fail to comprehend” what really happened – that he was found “not guilty” in a trial by a jury of his peers?

As dean of a public affairs school, has she read the U.S. Constitution, including its Second Amendment?

Is she aware that U.S. citizens do, in fact, have the right to keep and bear arms, and to defend themselves and others with deadly force in a plethora of circumstances, particularly when they are violently attacked?

Does she know that our “right of assembly” does not grant anyone a right to destroy property, threaten bodily harm, hit people with skateboards, or hold pistols to their heads – all of which happened to Rittenhouse in the minutes before he pulled the trigger of his AR-15?

Does she realize that calling Rittenhouse a “vigilante,” especially after he was found not guilty on all counts, and falsely claiming that he carried his gun across state lines, exposes her and her university to potential defamation claims?

Do we know “without a doubt” that “racial inequities” figure “in nearly every strand of the American fabric?”

Many disagree, even if, as Jamal is undoubtedly aware, disagreeing on Princeton’s campus can result in baleful consequences, against which the traditional hallmarks of academic freedom are no shield.

Which “policies and practices” does she want her students to “investigate?” Open jury trials? Constitutional liberties? Rights of self-defense? Due process? Presumption of innocence?

The College Fix reports on other college follies around the Rittenhouse affair; I didn’t know of these:

The scholar is not the only one within academia to be voicing alarm over the verdict.

As The College Fix reported today, controversial Rutgers University professor Brittney Cooper had said the Rittenhouse verdict was a sign of “which version of whiteness” America wants. When discussing the fact that the men Rittenhouse shot were white, she said there “have always been white victims of white supremacy.”

At Fitchburg State University in Massachusetts, administrators scheduled “virtual and in-person physical” spaces for students who needed to process the Rittenhouse verdict. The spaces are segregated by the students’ color, with white and students of color being asked to attend separate “processing spaces.”

At New York University, Dean Neil Guterman issued a statement saying the school’s social work scholars, teachers, and learners “stand in solidarity with those protesting against racial injustice, and share the pain at the outcome of the trial of Kyle Rittenhouse.”

Brittney Cooper, whoever she is, does have the right to express her viewpoint so long as it’s stated as her personal opinion and not as an institutional statement. (I haven’t seen it). But Fitchburg State and now New York University have broadcast official opinions, which isn’t kosher.  Further, I easily found the statement of Dean Guterman on the internet. It is is official and also unwarranted. To wit (bolding is mine):

Lord, I don’t know what happened to American colleges, but they’re apparently full of adnministrator-cowards who are afraid of being mobbed by Social Justice.