Here’s a theory that is mine. And now, my theory: Canada is more woke than the United States. Why? Because although the innate degree of wokeness may be the same, Canadians are famous for their politeness, and thus don’t push back very hard on Woke insanity, like the article I describe below. Without pushback, Wokeness, with its drive for power, spreads inexorably.

So here’s the article, which you can get translated automatically from the French (at least I could with Chrome). It’s from Le Figaro. Sadly, the story it tells seems true. 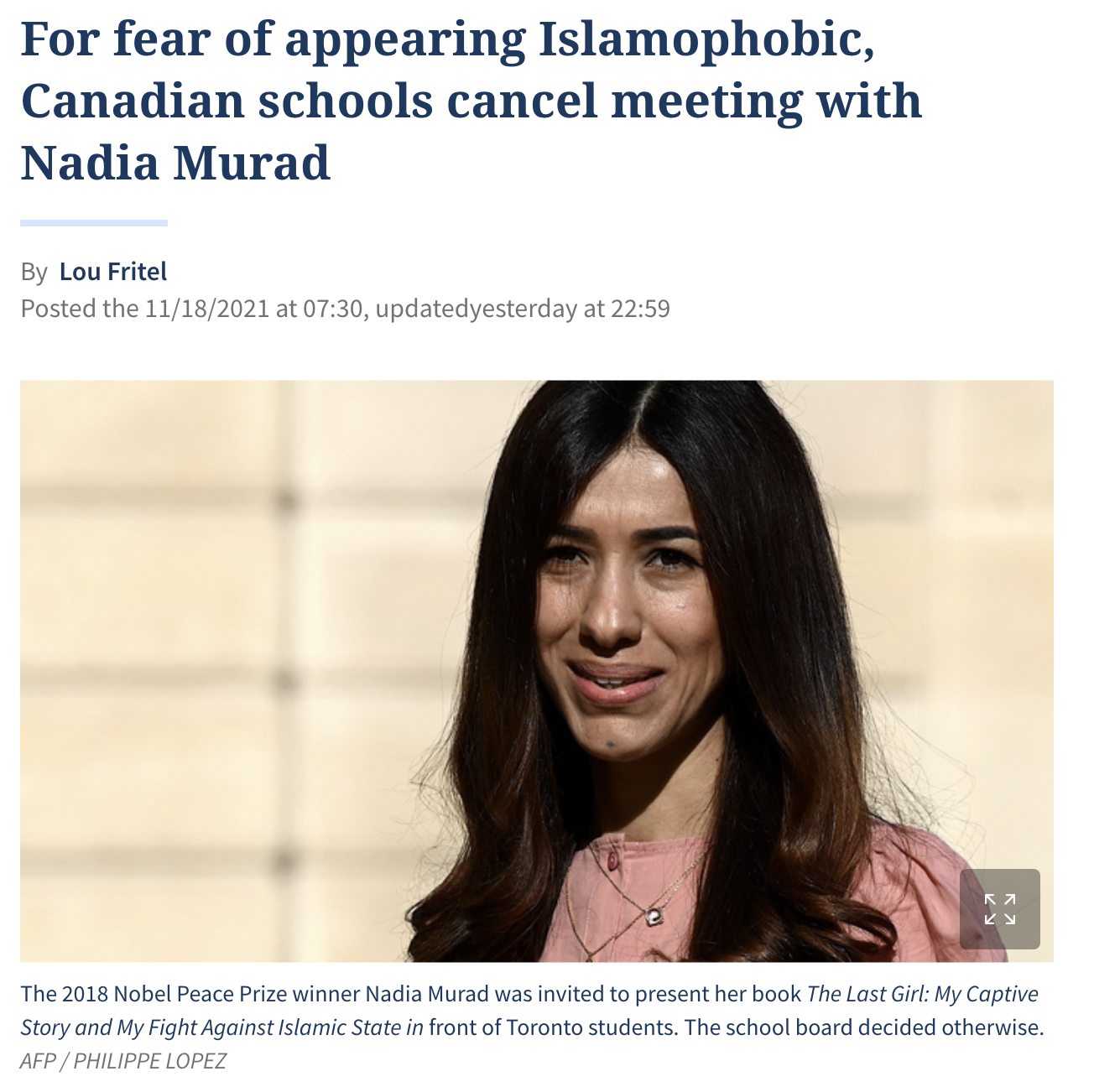 Nadia Murad is an Iraqi who now lives in Germany. In 2018 she and Denis Mukwege won the Nobel Peace Prize; she for her campaign “to help women and children who are victims of abuse and human trafficking, and Mukwege for “repeatedly condemn[ing] impunity for mass rape and criticiz[ing] the Congolese government and other countries for not doing enough to stop the use of sexual violence against women as a strategy and weapon of war.

Murad’s drive came from personal experience, for as the Nobel Committee notes:

Nadia Murad is a member of the Yazidi minority in northern Iraq, and in 2014 the Islamic State (IS) launched a brutal attack on her home village. Several hundred people were massacred, and girls and young women were abducted and held as sex slaves. While a captive of the IS, Nadia Murad was repeatedly subjected to rape and other abuses. After three months she managed to flee.

Murad is the first Yazidi and first Iraqi to be awarded the Nobel Prize for anything. She was invited to a Toronto school book club, and what a catch she would be, for she was talking about her latest and autobiographical book. (There was another guest as well; see below.) But she and the other participant were canceled. As the paper describes (note: this is an automatic translation so I’ve tweaked it a bit to make it clearer):

The Toronto school board has withdrawn its support for a book club dedicated to young girls. The presence of the Nobel Peace Prize, committed to the Yazidi cause, could, according to its representatives, offend Muslim students.

Founded by Tanya Lee about four years ago, the book club where Nadia Murad is a guest welcomes young girls aged 13 to 18, from various secondary schools, themselves overseen by the said school board. Without being directly governed by the institution, the club is promoted by its members to the students. The organizer of this literary meeting told the Globe and Mail of her misunderstanding , explaining that the superintendent of the school, Helen Fisher, allegedly said that the students would not participate in the event, scheduled for February 2022 .

The reason given? Her book, The Last Girl: My Story of Captivity and My Fight Against Islamic State , may promote Islamophobia, reports The Globe and Mail . This is to forget that the 28-year-old Iraqi girl was, for three months, the sexual slavery of no less than 13 Daesh soldiers in 2014, before she managed to flee to Germany. Shocked by the exchange with Helen Fisher, Tanya Lee says she then sent her an email containing detailed information on the Islamic organization, coming from the BBC and CNN. “This is what the Islamic State means ,” she wrote to the superintendent.It is a terrorist organization. It has nothing to do with ordinary Muslims. The Toronto school board should be aware of the difference. ”

Apparently a council of the school board finally decided not to distribute the book to students. That’s absurd. What better role model for girls of that age than a woman who was abused and fought back hard—gaining a Nobel Prize in the end? The “Islamophibia” excuse of course comes from fear: that Muslims might take offense at the topic and cause trouble. But remember, Murad was abducted and sexually abused by an extremist group of Muslims. All rational Muslims should support Murad and her appearance. But of course religion has a way of eroding rationality. What the school board is doing is in effect saying that what ISIS did to Murad shouldn’t be criticized publicly, thus condoning religiously-inspired sexual slavery.

By the way, another person, also canceled, was supposed to appear with Murad in a joint event:

The event was supposed to carry discussion on two books in presence of their authors — Marie Henein’s ‘Nothing But the Truth: A Memoir‘ and Nadia Murad’s ‘The Last Girl: My Story of Captivity, and My Fight Against the Islamic State‘.

The board said it has withdrawn support to hold the October event with Henein, the daughter of Egyptian immigrants and one of Canada’s most prominent lawyers, because her book was “problematic” as she “defended” former CBC host Jian Ghomeshi when he was accused of sexual assault.

As far as I know, Ghomeshi was found “not guilty.” This is going too damn far, school board! Why aren’t Canadians objecting to this and writing letters to the Toronto school board?