TGI and a big F!: We’ve reached the end of the week—welcome to Friday, November 5, 2021: National Doughnut Day. Make mine a maple-bacon doughnut like those sold at Voodoo Donut in Portland (arrow in pic below). It’s more a bar than a torus, but it’s good!: 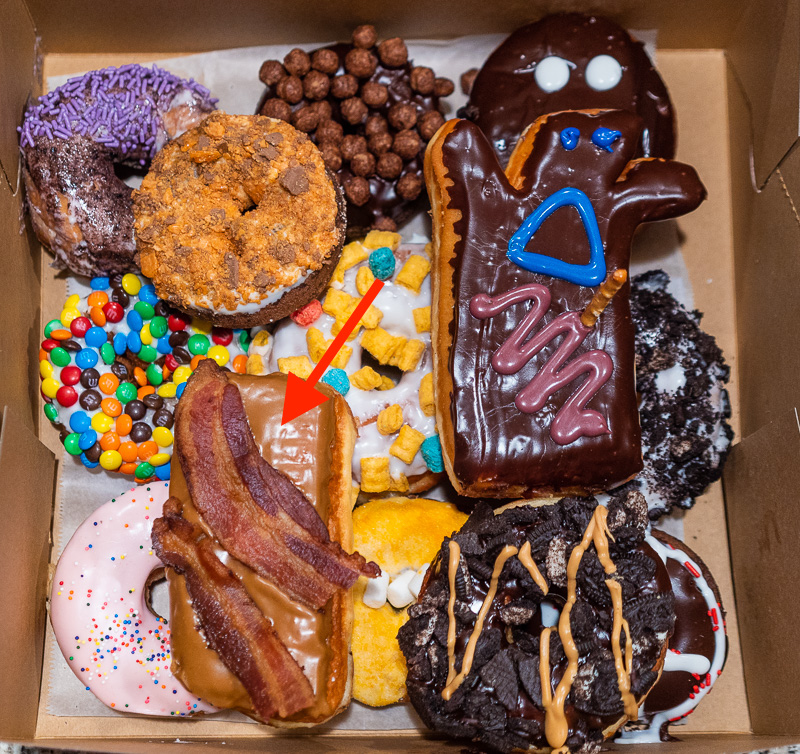 It’s also Fountain Pen Day (I have several, including the fabled Mont Blanc Meisterstück, but they’re all broken, and who writes by hand now?), American Football Day, National Love Your Red Hair Day, and Bank Transfer Day, a protest against commercial banks.

*We’re 288 days into the Biden administration, and the First Family has yet to keep its promise to put a cat in the White House. My approval rating of Uncle Joe has dropped sharply.

*Both the New York Times and the Washington Post (the latter in an op-ed) have reported on the case of several University of Florida professors who were barred from their University from testifying in court against Florida’s new voter-restriction laws. This is a genuine violation of academic freedom, and the University must and will back down, but would the case get so much coverage if the professors were, say, testifying in favor of Texas’s new abortion law? My hypothesis is that because this is a left-wing cause, the academic fracas is getting more attention in the mainstream liberal media.

*According to a Presidential mandate, all companies with 100 employees or more must obey the rule: get fully vaccinated by January 4, get tested for Covid weekly, or hit the road.  (Many workers have to pay for their own tests.) This covers 84 million workers (many of whom are already vaccinated), but expect a rash of lawsuits and a rain of pink slips come January. The gub’mint is also pondering extending this to smaller businesses.

*It was always on my bucket list to go to Churchill, Manitoba to see the polar bears on one of those “tall bus” tours. But that opportunity is waning, according to a NYT article called “3,000 miles from Glasgow, a town and its polar bears face the future.” Now global warming is reducing the sea ice, and with it the hunting opportunities for these magnificent animals (and let’s not forget all the non-charismatic animals, either). From the article:

One immediate impact of global warming is that the bears are spending more time around Churchill as the sea ice forms later in the year and melts earlier. On land, polar bears lose about 1 kilogram (2.2 pounds) of their weight each day. As ice season shrinks, the bears face the double pain of fewer days of hunting and more days of fasting. Between 1980 and 2019, the weight of the average pregnant polar bear in the Churchill region declined by 15 percent, according to Nick Lunn, a Canadian government scientist. New births are in decline. The number of polar bears in western Hudson Bay fell by 30 percent from 1987 to 2016, and some experts think the population already is in terminal decline.

This is ineffably sad.

*A New Zealand family has found what is possibly the world’s largest (and ugliest) potato. They’ve given it a name, too: Doug. (That’s because they dug it up.)

. . . it’s quite possibly the largest potato on record. When the couple lugged it into their garage and put it on their old set of scales, it weighed in at a remarkable 7.9 kilograms (17.4 pounds). That’s equal to a couple of sacks of regular potatoes, or one small dog.

In the weeks since their unusual find on Aug. 30, the couple’s potato has become something of a celebrity around their small farm near Hamilton. They’ve named the potato Doug, after the way it was unearthed, and Colin even built a small cart to tow Doug around.

“We put a hat on him. We put him on Facebook, taking him for a walk, giving him some sunshine,” Colin said. “It’s all a bit of fun. It’s amazing what entertains people.”

A more official weigh-in at a local farming store put Doug at 7.8 kg. The Guinness World Records entry for the heaviest potato is a 2011 monster from Britain that weighed in at just under 5 kg. The couple say they’ve applied to Guinness to have Doug recognized and are waiting to hear back.

Here are two photos of Doug. It’s HUGE! (Photos by Donna and Colin Craig-Brown via AP): 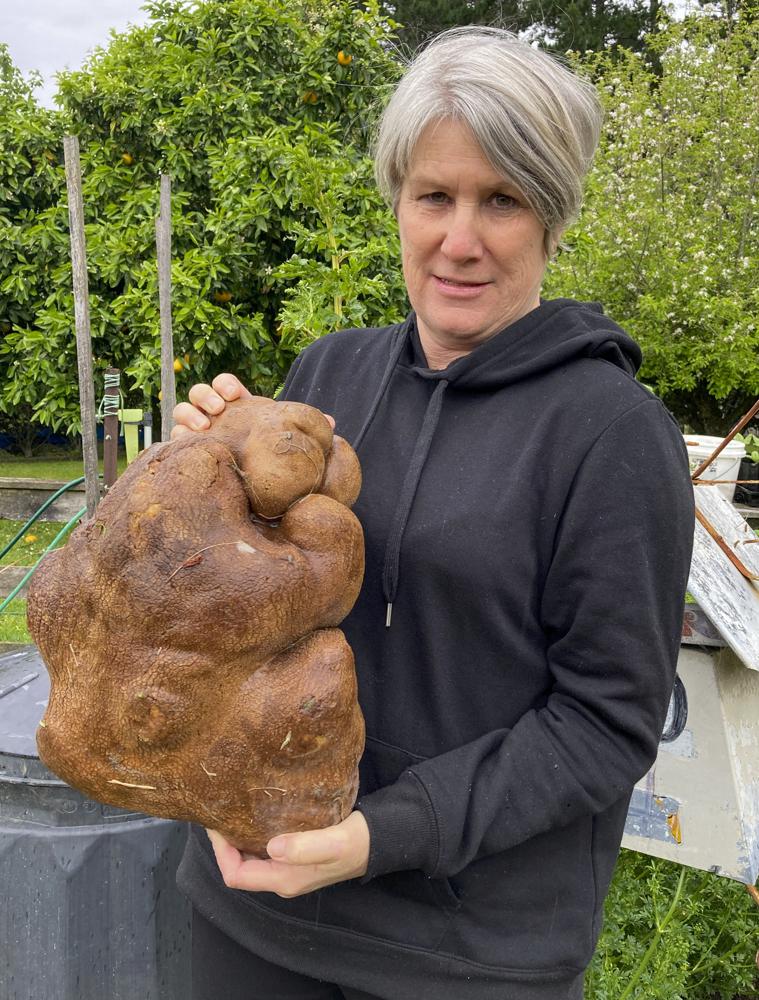 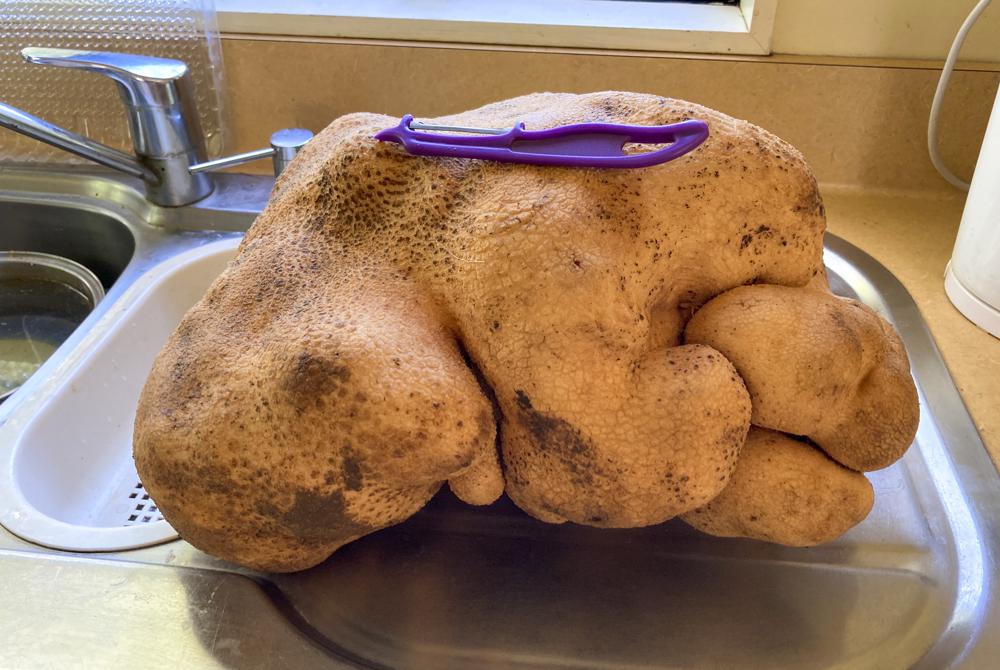 *We have news and photos of poor injured Jack the Cat (saga here), who’s finally recovering pretty fully from his third-floor fall. Angell Memorial Hospital did a fantastic job, as did his staff when helping him recover. Notes from his staff:

Just got word from vet that Jack has healed beautifully, the pins/hardware are out and he will be back to 100% pre-injury normal within next 6-8 weeks. He should start weight-bearing on his wrist in next week or so. No need for any further follow up unless there is a problem. 🎉 👏 😁 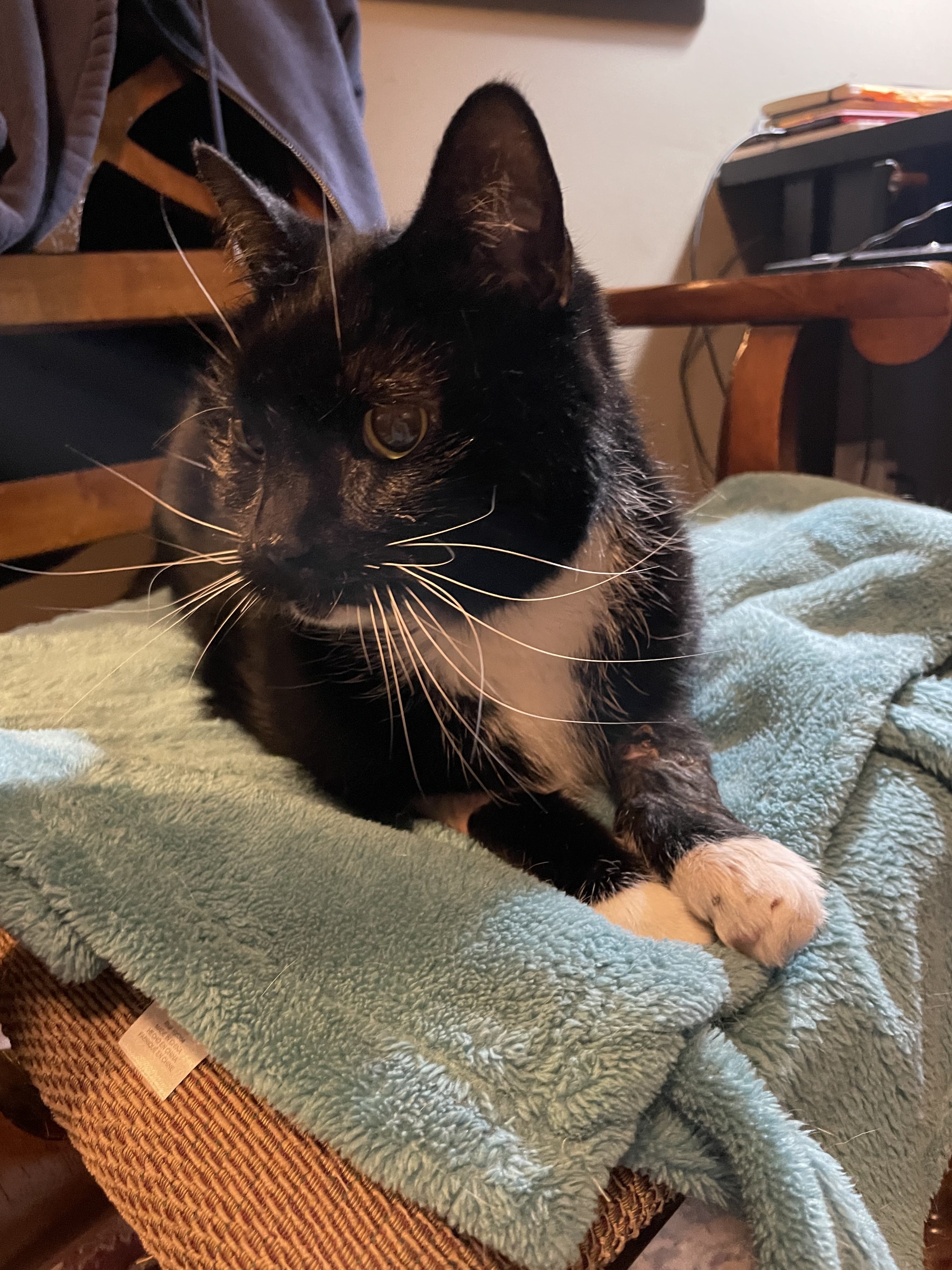 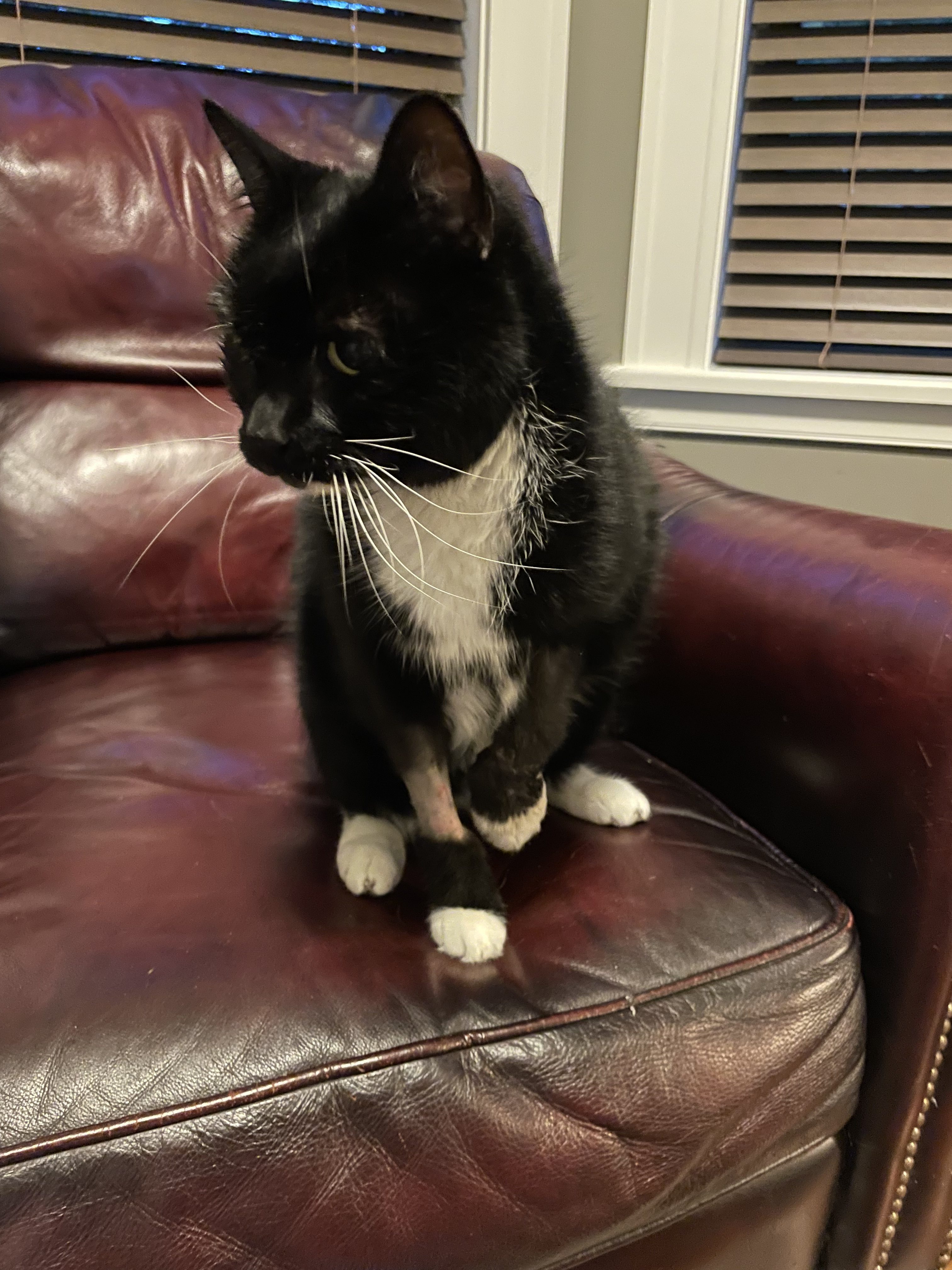 Jack doing well, getting buprenorphine every eight hours to help ease the pain of pin removal. Some scabs remain, these will heal over soon and fall off. He must wear the cone for another few days to allow wound healing to continue uninterrupted. He’s looking a little haggard from pain meds and all the goop they used in his eyes to keep them lubricated while under anesthesia yesterday. He’s eating well, enjoying all the snuggles. 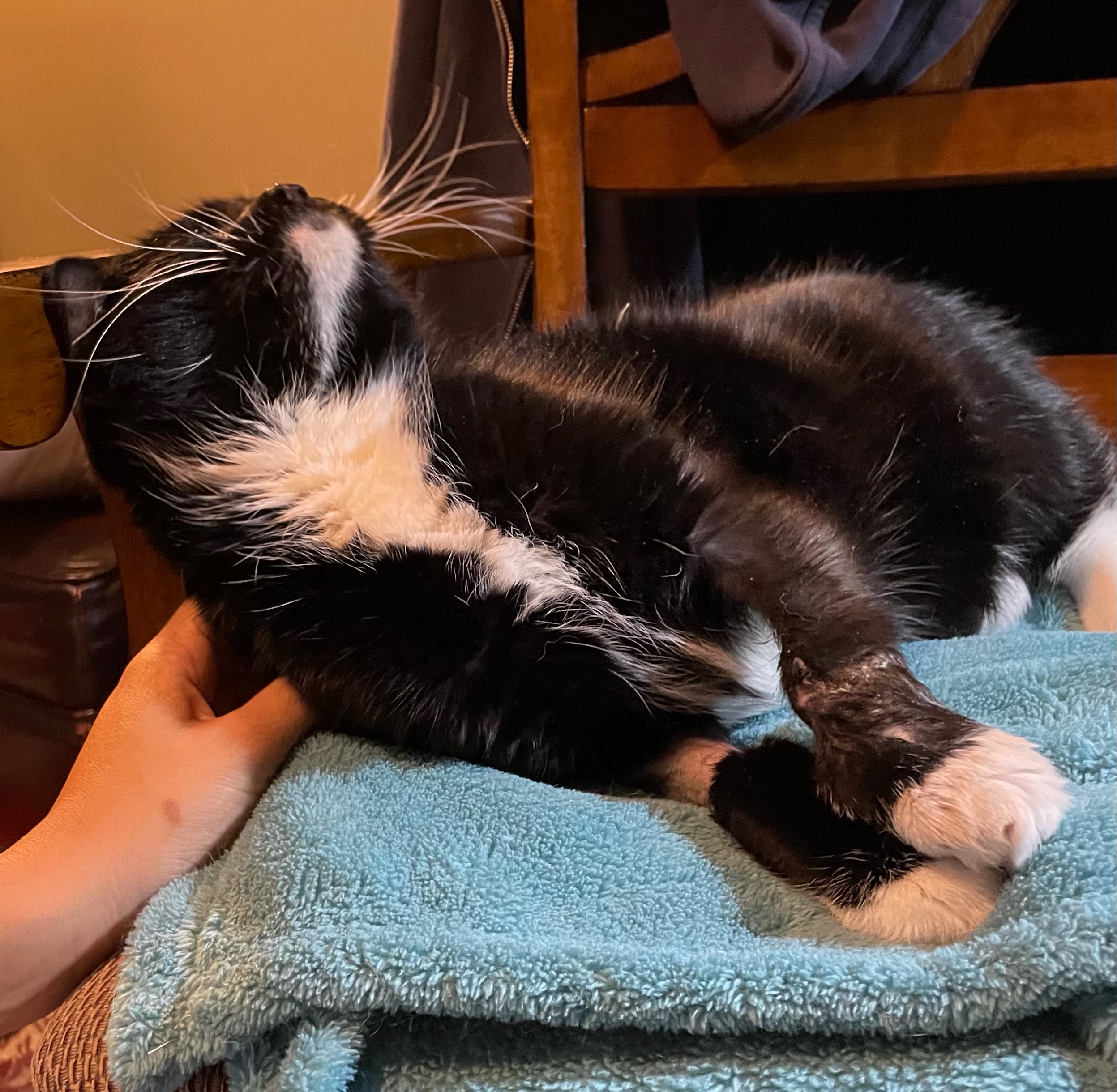 Stuff that happened on November 5 includes:

“Immediately before his execution on 31 January, Fawkes fell from the scaffold where he was to be hanged and broke his neck, thus avoiding the agony of being hanged, drawn and quartered.”

Here she is. Weirdly, Trump pardoned her for her voting crime! 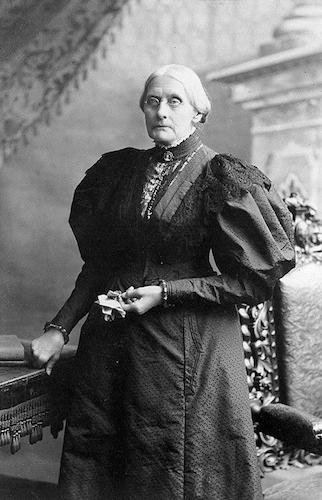 Here are Lenin (Trotsky nearby) at a speech fomenting the October Revolution: 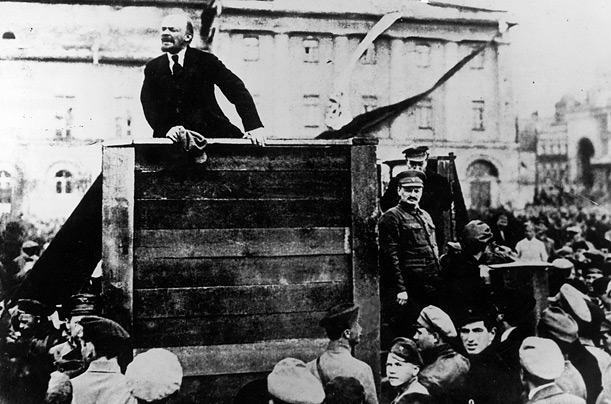 A few photos of my encounter with Roosevelt, at the “Little White House”: his refuge in Warm Springs, Georgia (he helped found the Warm Springs Foundation for polio, and often soaked in the nearby hot pool):

Me in front of his house: 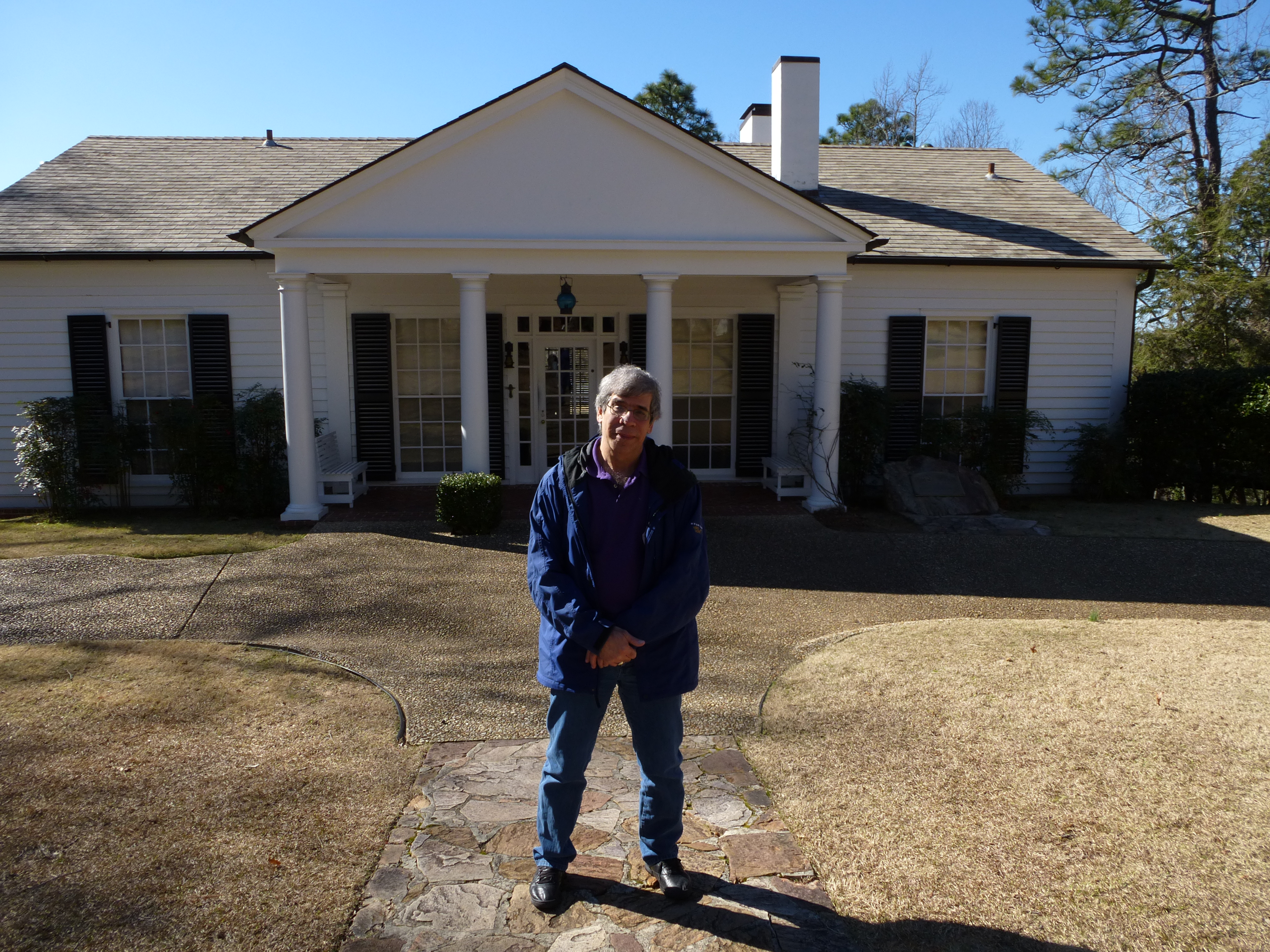 The bed in which he died (he was stricken with a hemorrhage while his mistress was there; they had to rush her out quickly before Eleanor came down from D.C):

Roosevelt’s leg braces (he was paralyzed from the waist down by polio): 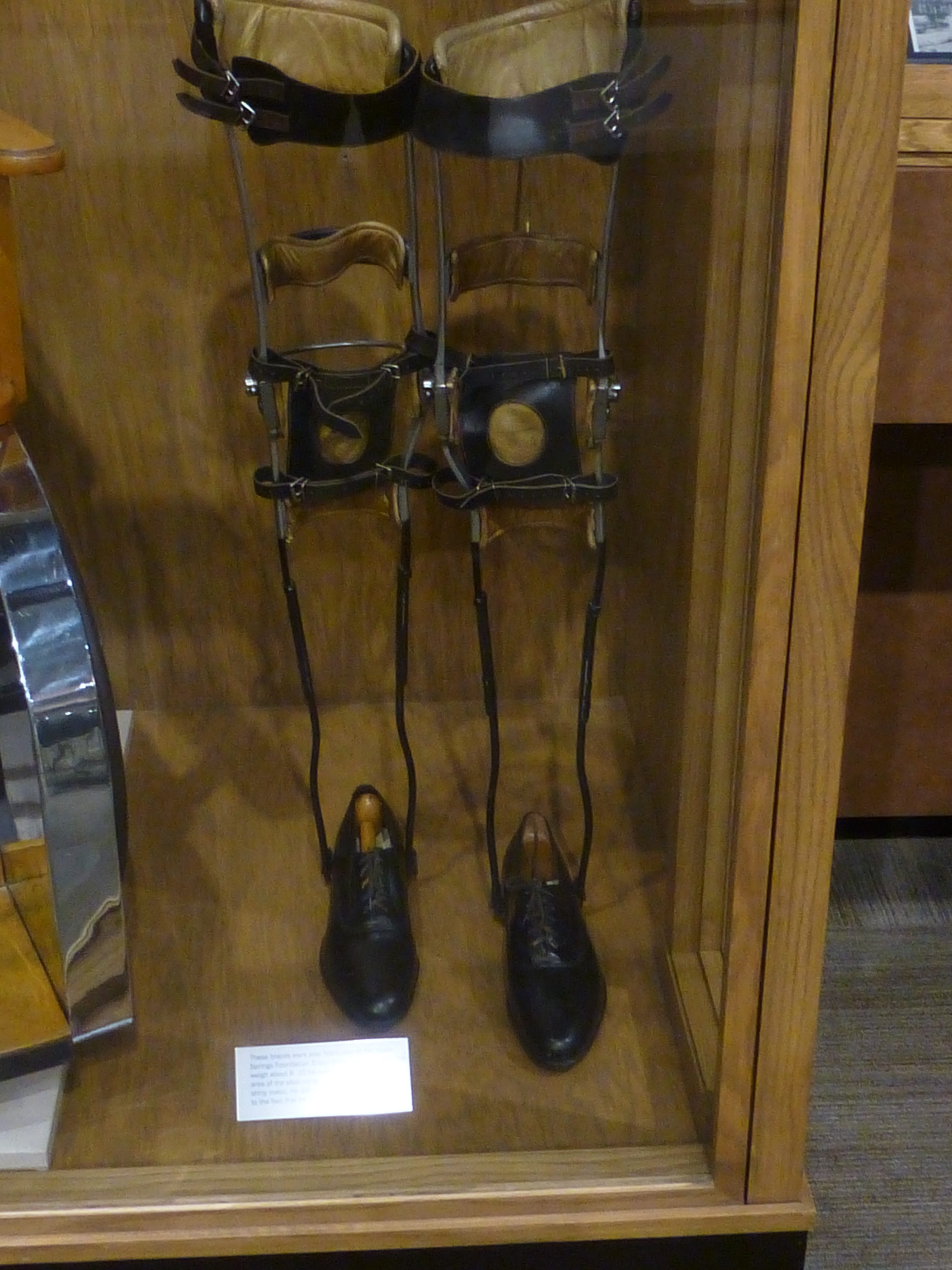 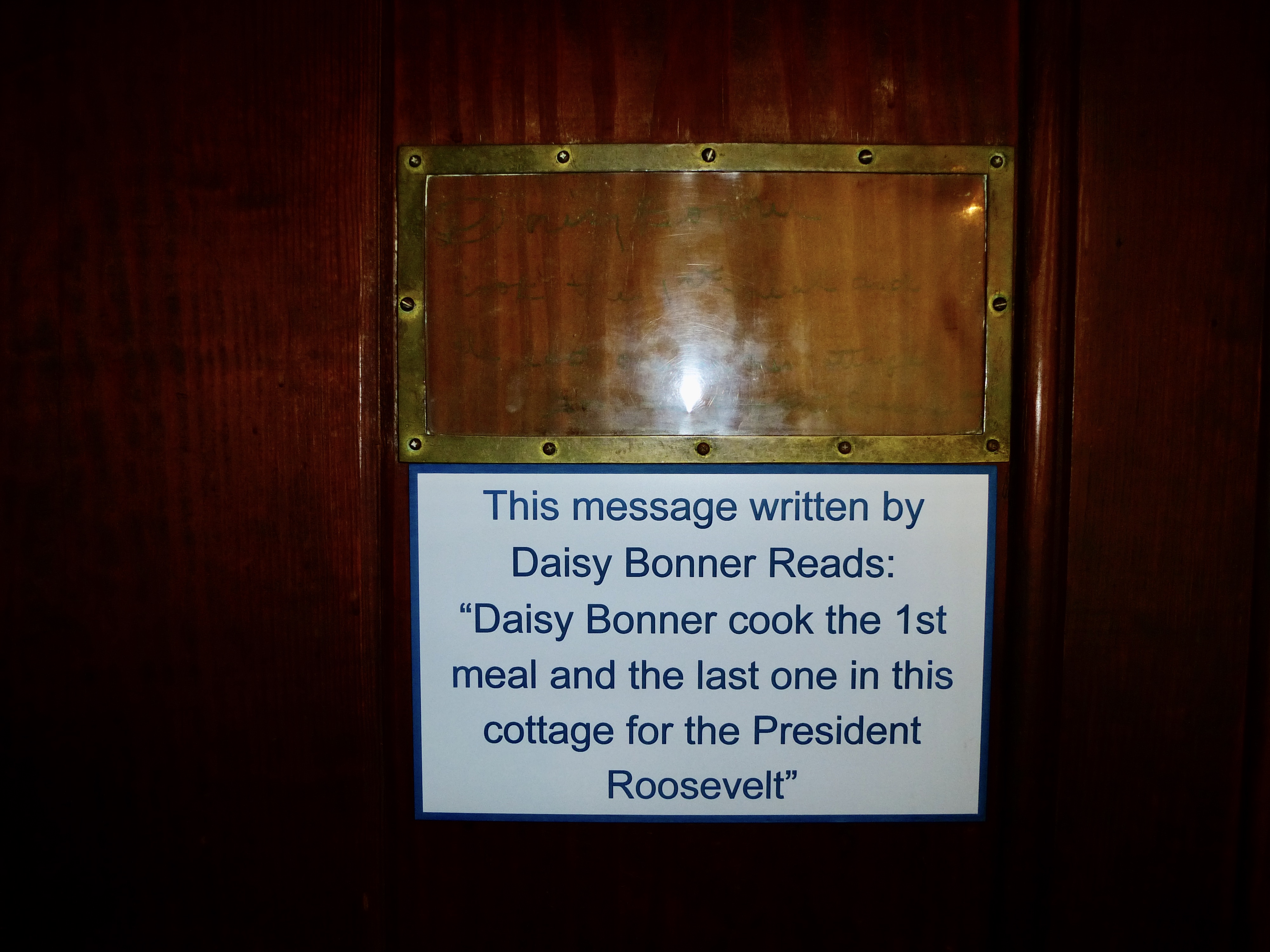 Debs was the first socialist to run for President of the U.S.—four times, and the last time from prison. The caption of the cartoon below: “Clifford Berryman’s cartoon depiction of Debs’s 1920 presidential run from prison”:

Haldane was a colorful character and a brilliant geneticist as well as a classical scholar. He’s now being considered by Imperial College for cancellation although he was a radical (a Marxist, socialist, and humanist) who gave up his British citizen because of colonialism and went to live in India as a naturalized Indian. Cancellation, my tuchas! UPDATE: Over at Panda’s Thumb, Nick Matzke has a post explaining why attacks on Haldane for being illiberal are “nuts”.

Here’s a picture of him (left) with the famous statistician P. C. Mahalanobis.  Go here to read more about “JBS” (his nickname) and learn about a good biography. 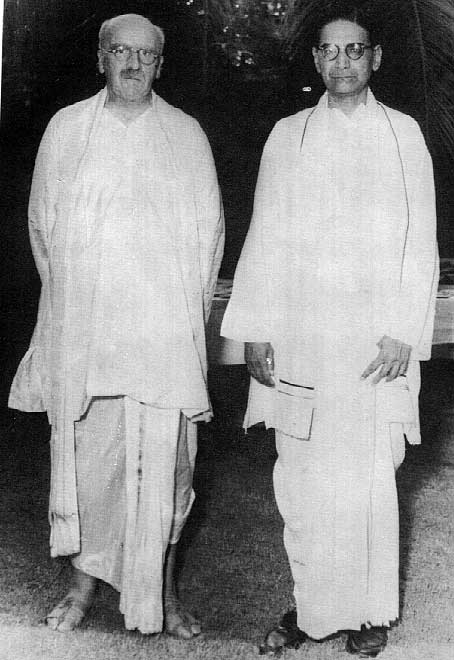 Art, who’s 80 today, singing “Bridge Over Troubled Water” at Simon and Garfunkel’s Central Park Concert on September 19, 1981 (it was free, too!):

This I didn’t know, from Wikipedia:

Joni Mitchell wrote two songs about her affairs with Shepard during Bob Dylan’s Rolling Thunder Revue tour of 1975. In “Coyote” she recounts Shepard’s seduction of Mitchell at a period while he was both married and having an extramarital affair with the tour manager Christine O’Dell with the lines “He’s got a woman at home, another woman down the hall, but he seems to want me anyway.”  [A great rendition of “Coyote” is here.]

Shepard, a real talent in both acting and writing, died too young. Here he is playing Chuck Yeager in “The Right Stuff”:

Those who became defunct on November 5 include: 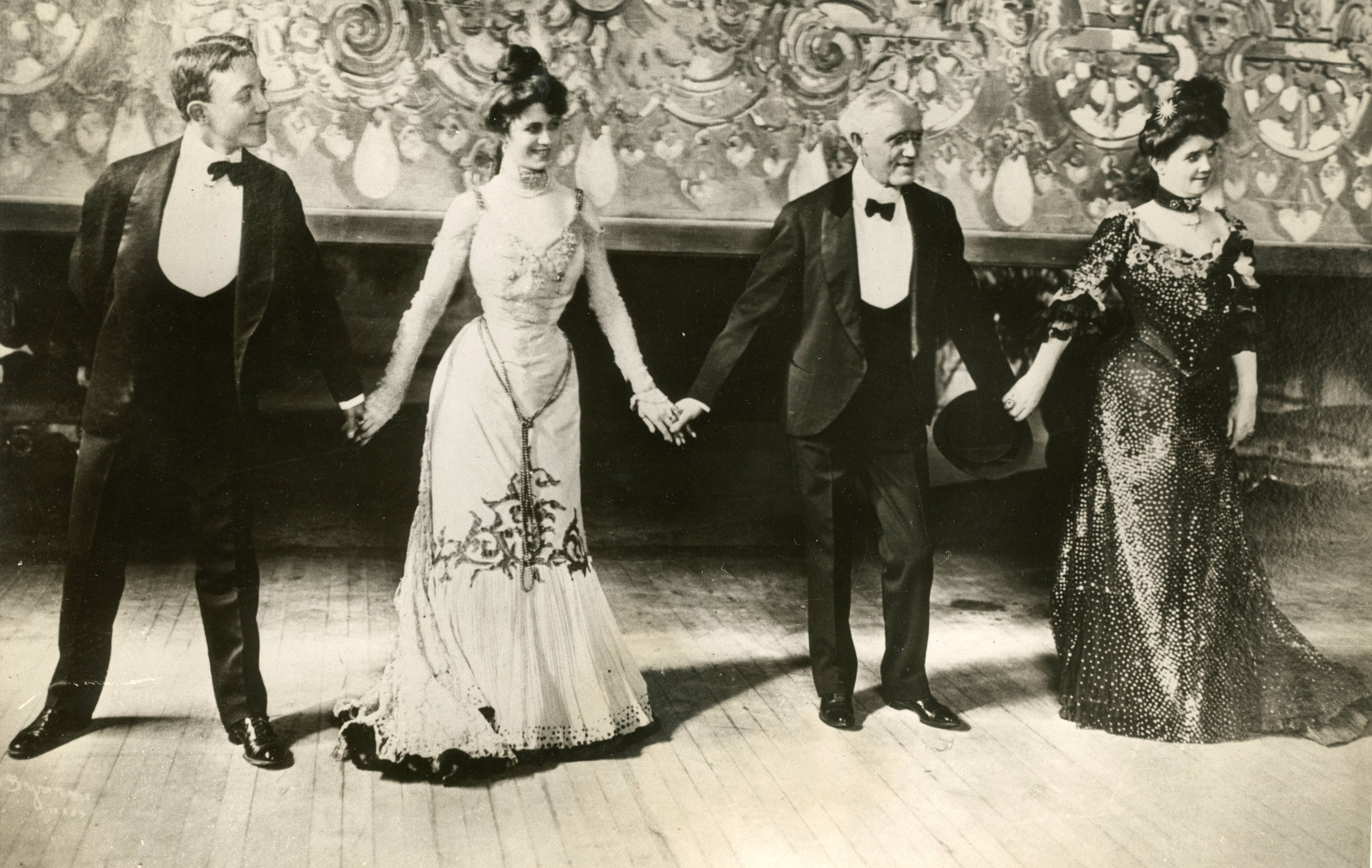 Tatum was as blind as a bat, but he didn’t need to see to be one of the best jazz pianists of all time. Here he is playing “Yesterdays”:

I ate twice at Trotter’s restaurant, both times reserving the kitchen table. The man was a tyrant back there, but boy, could he cook!

Meanwhile in Dobrzyn, Kulka is trying to make friends with Hili but she’s out of luck. 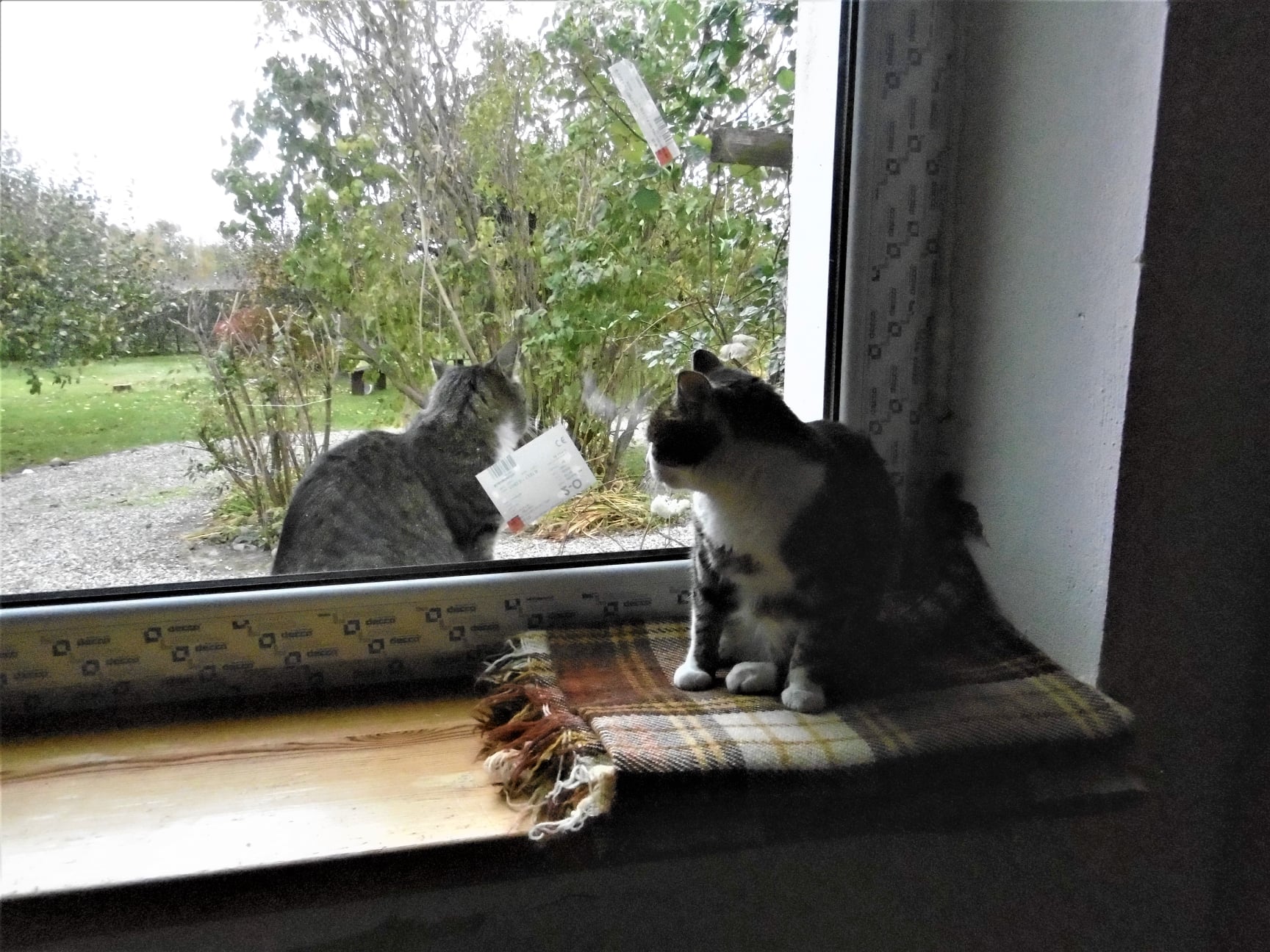 A sweet photo by Paulina of Kulka holding and licking Szaron’s paw: 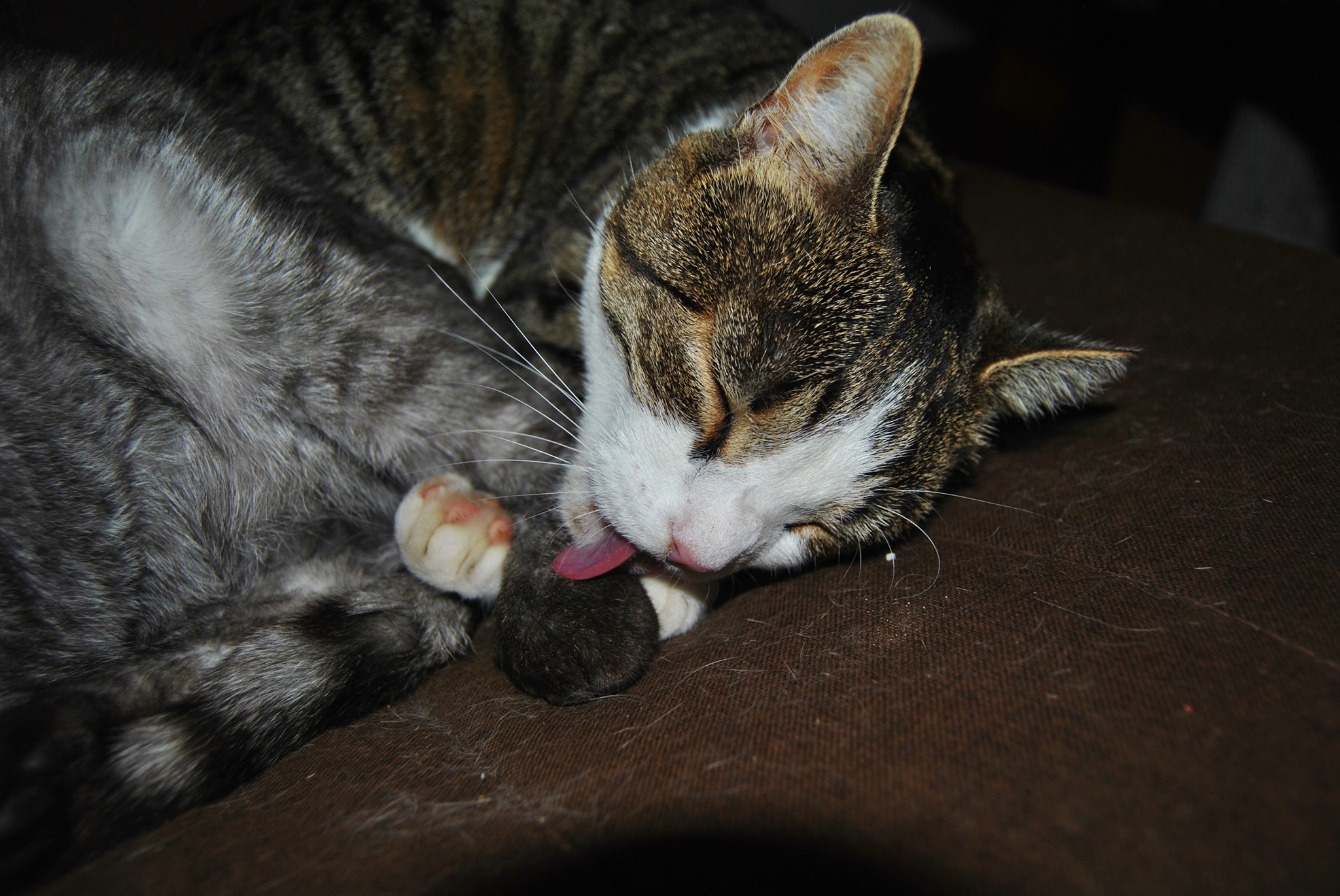 A Kliban cartoon from Stash Krod: 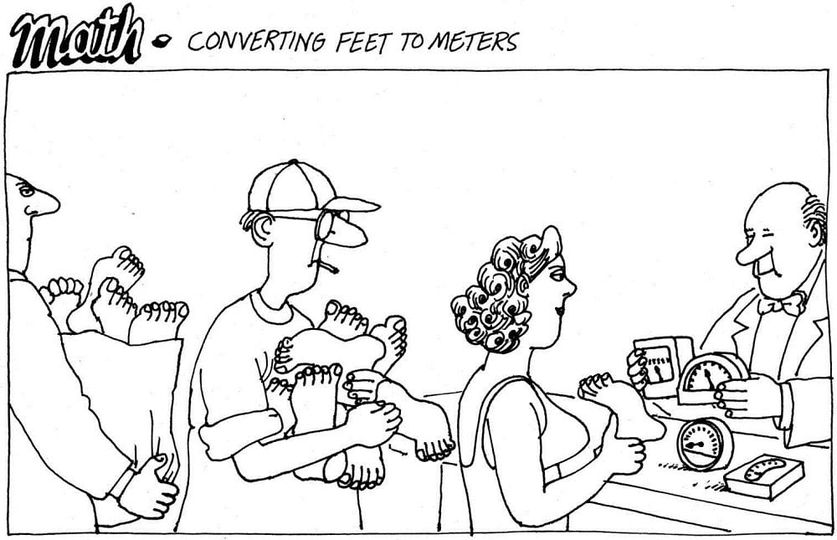 Reader John sent a cartoon about panpsychism, the nutty theory that every bit of matter in the Universe has a kind of consciousness: 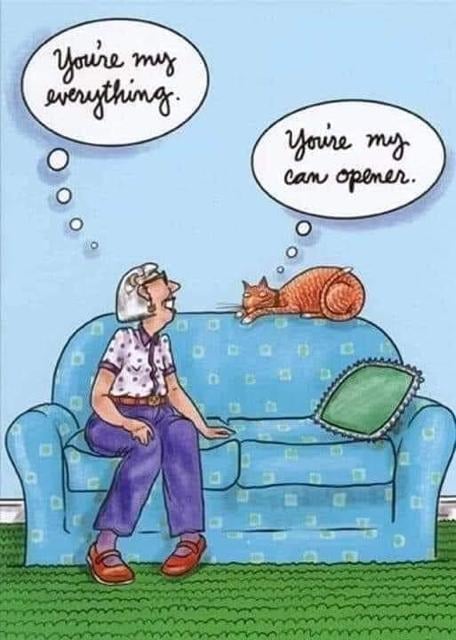 One for the d*g lovers from Ricky Gervais. These are scenes from his series “After Life”, and I’ve watched both seasons of it. This reminds me that Season #3 should be airing soon. I liked both seasons, though some people thought the second had gone downhill:

From Luana, who is a Hispanicx:

Why do they do this?
Pew Data is easily accessible – less than 3% of Hispanics use the term "Latinx."
76% have never heard of it.
61% use the term "Hispanic," which was purpose built by Hispanics to be a race-neutral term for people from the Spanish speaking world. https://t.co/3IjXwtjLP0 pic.twitter.com/dh9k1BI2YT

Tweets from Matthew. Do you know what the “pet” is? Answer at the bottom.

Even a fly can have a little companion pet 😆 pic.twitter.com/vURc4YsyqR

This seems to be true (check out the link). But there are horrible related examples in the thread:

A man who died of Covid-19 was dissected in front of a live audience at a Portland hotel, where event organizers sold tickets for up to $500.

The man's family had no idea. Nor did the funeral director who prepared the man's body.

A new one on me! The story of this car is here; it was apparently auctioned off for $1.76 million after it was restored and repainted.

Now you know what the surface of Venus looks like:

Many still images assembled into a “video” of the surface of Venus. Amazing. https://t.co/lJWmshW976

Cat and camel buddies. Be sure to look at all the photos:

I may have shown this before, but check out this caracal’s antennae:

Answer: The pet is a pseudoscorpion.