Welcome to a chilly Chicago Thursday; it’s November 4, 2021: National Candy Day. I thought that was supposed to  be the day after Halloween!

It’s also Diwali in India, a festival of lights and, of course, many sweets. And it’s International Stout Day (as in Guinness), National Chicken Lady Day (celebrating “Dr. Marthenia ‘Tina’ Dupree, who is known as ‘The Chicken Lady’. For twelve years she worked at one of the largest chicken restaurants in the world as their Director of Community Relations and Training”); National Men Make Dinner Day, and National Skeptics Day. 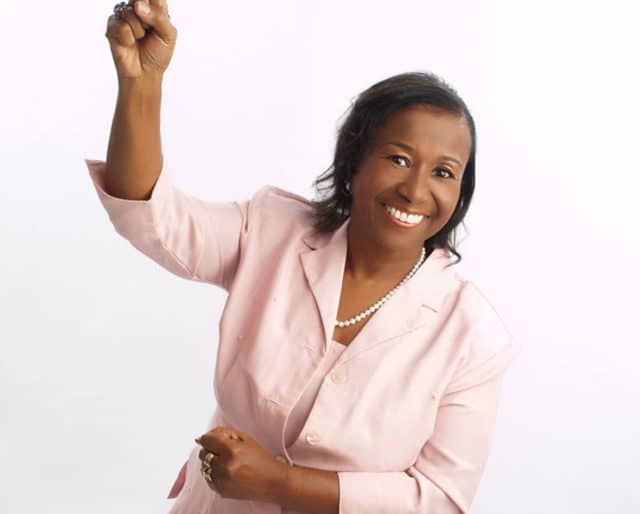 a Chinese-born British-American electrical engineer and physicist who pioneered the development and use of fibre optics in telecommunications. In the 1960s, Kao created various methods to combine glass fibres with lasers in order to transmit digital data, which laid the groundwork for the evolution of the Internet.

*First, the good news. As of yesterday evening (when I wrote most of this), New Jersey Democratic Governor Phil Murphy pulled it out of the fire, narrowly defeating Republican challenger Jack Ciattarelli. But the margin at this time is thin, so it’s still alarming to Democrats (NJ is a blue state!). Here are the votes from NPR yesterday evening:

*Well, we learned yesterday that “progressive” Leftism isn’t a winning strategy, except perhaps in Massachusetts (where, however, local Elizabeth Warren didn’t carry the state in the 2020 primaries).

We learned that “defund the police” is not a winning slogan, that parents are really worried about whether their kids face a divisive racial atmosphere in school, regardless of what’s taught there, and that the racialization of everything is not #1 on the agenda of many centrists.

I still think my idea of putting James Carville in charge of the Democratic agenda is brilliant (see below), but I think we all know what should be done now: spend less time bashing Republicans and more time figuring out ways to build on what success the Democrats have had (this will be easier when the two spending bills pass), and taking more seriously and responding civilly to the concerns of those who voted for Youngkin in Virginia and Ciaturrelli in New Jersey. (Yes, some of you will say, “Why be civil to Democrats?” And that’s why we’re losing.)

Here’s who we need!:

*The two remaining conservative columnists at the NYT have decent editorials about the Democratic debacle yesterday. You should read them both, because we need to listen. First is Bret Stephens’s “Why the Democrats are in trouble.” A quote:

The tragedy of the Democratic Party may yet be its own loss of nerve against its in-house extremists. Whether it’s this week or next year, the political penalties are likely to be steep.

Ross Douthat’s take is “Republicans schooled the left in Virginia.” A quote from him:

So Democratic politicians may need to decide what they actually think about the ideas that have swept elite cultural institutions in the last few years. Maybe those ideas are worth defending. Maybe Kendi and DiAngelo are worth celebrating. Maybe school superintendents who recommend their work should be praised for doing so.

If so, Democrats should say so, and fight boldly on that line. But if not, then Democratic politicians in contested states, facing Republican attacks on education policy and looking at the unhappy example of Virginia, should strongly consider acknowledging what I suspect a lot of them (and a lot of liberal pundits) really think: That the immediate future of the Democratic Party depends on its leaders separating themselves, to some extent, from academic jargon and progressive zeal.

That’s what Carville said above! 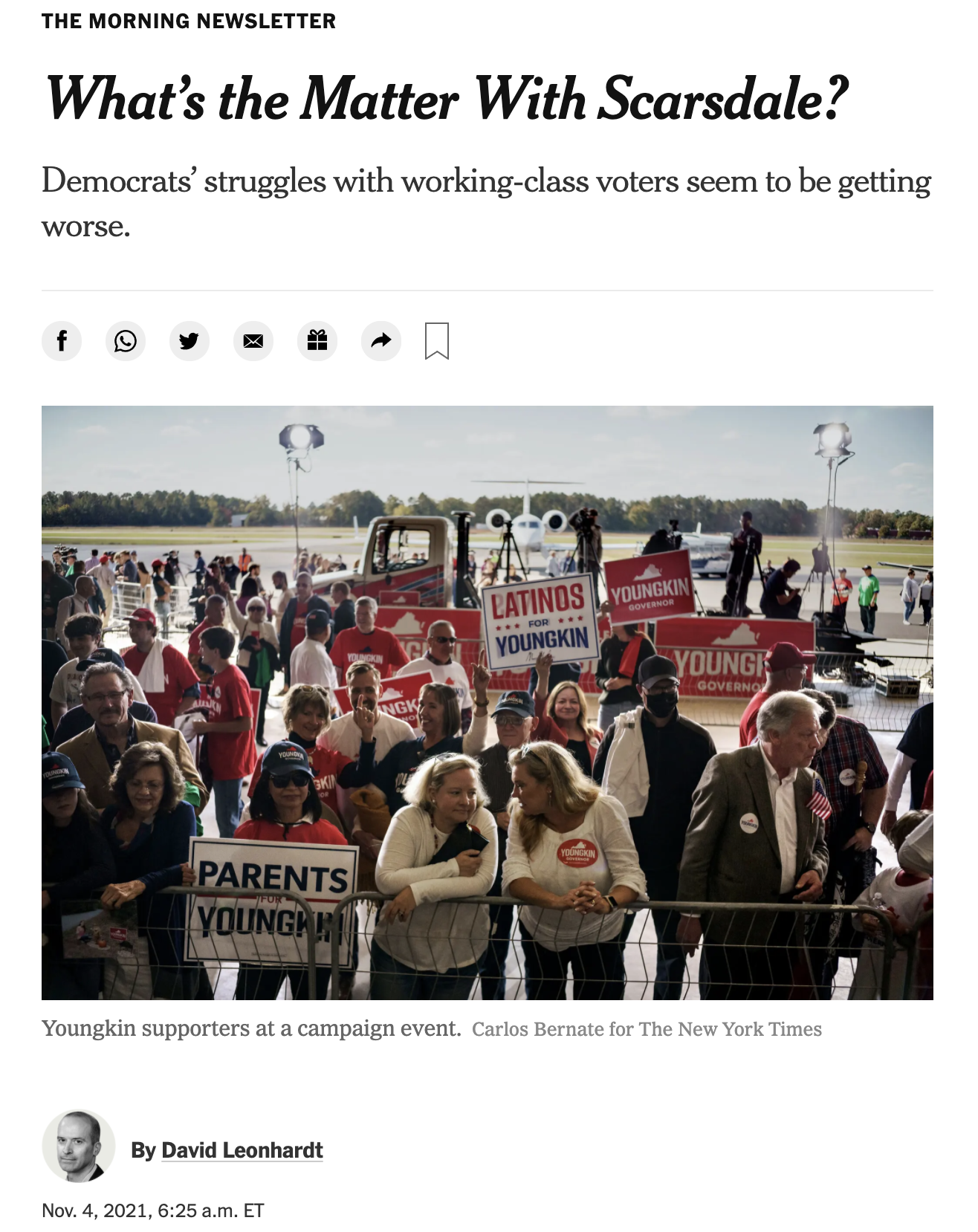 But working-class conservatives are hardly the only voters who prioritize issues other than their financial situation. The residents of the affluent towns I mentioned above — and I could have listed dozens more — also do. Which raises a different question: What’s the matter with Scarsdale?

The answer, of course, is nothing. Pocketbook issues aren’t the only reasonable ones to decide a person’s vote. Other subjects, like climate change, civil rights, religious rights, abortion, immigration, crime, education and Covid-19, are important, too.

*Rock songs are on the chopping block, as suggested in Jennifer Finley Boylan’s new NYT op-ed, “Should classic rock songs be toppled like Confederate statues?” This is a confusing editorial because she seems to take different stands throughout the piece. For example, she criticizes Don McLean, who wrote “Vincent” and, of course “America Pie,” because he pleaded guilty to spousal abuse. Here’s a hint that the song shouldn’t be played:

[McLean] denies having ever assaulted his wife, and his lawyer has said that he pleaded guilty “not because he was in fact guilty of anything but to provide closure for his family and keep the whole process as private as possible.” His iconic song still plays on the radio.

But shouldn’t it? Especially when Boylan says this:

Of course, there is no easy answer here. Even Ms. McLean doesn’t think “American Pie” should be banned from playlists, like some other pieces of classic rock produced by disgraced musicians.

. . . Instead, Ms. McLean told me, she feels we should reconsider how we elevate these artists. It’s the tarnished creators, she said, that we should not celebrate. In other words: The problem with “American Pie” isn’t the song. It’s the singer. “American Pie” remains a great song. In 2016 the Library of Congress selected the original recording for preservation in the National Recording Registry.

But who celebrates Don McLean? It’s the song we celebrate. Eric Clapton has turned out to be a wanker, but I can still love “Layla.” And rock artists who are truly revered as people, like Paul McCartney, aren’t usually complete jerks. Boylan goes on:

I want to live in a world where I can be moved by art and music and literature without having to come up with elaborate apologies for that work or for its creators.

But does such a world exist? It is hard to think of some of our greatest artists without also thinking of their messy, sometimes destructive lives. In so many cases, it’s the very chaos of those lives that has helped create the art. It’s easy to romanticize that chaos and to ignore the wreckage artists can leave in their wakes.

It was Don McLean, in “American Pie,” who asked if music can save our mortal souls. My guess is probably not. But it can help us to time travel, and not only to our adolescent past. Maybe reconsidering those songs, and their artists, can inspire us to think about the future and how to bring about a world that is more inclusive and more just.

Sometimes a song is just a song, and really, does Boylan spend a lot of time apologizing for Don McLean? I doubt it. She should stop sniffing around for impure artists and just enjoy the music, which, after all, isn’t usually designed to bring about a just and more inclusive world.

*Reader Chris found a big mistake by CNN, which has unwittingly revealed its transphobia. As he says, “An unintentional statement by a CNN headline that only women have a cervix: (Screenshot of CNN frontpage 4th November, 7.33am).”

I await their apology.

Stuff that happened on November 4 includes:

Simpson was an odd-looking man with fluffy mutton chops (below), but his self-experimentation with various chemicals and doses is what led to this triumph. A quote from Wikipedia:

It was much by chance that Simpson survived the chloroform dosage he administered to himself. If he had inhaled too much and died, chloroform would have been seen as a dangerous substance, which in fact it is. Conversely, if Simpson had inhaled slightly less it would not have put him to sleep. It was his willingness to explore the possibilities of the substance that set him on the road to a career as a pioneer in the field of medicine. Subsequently organising supplies to Florence Nightingale and Queen Victoria, led to its use in obstetrics and for the military, and according to the British Medical Journal changed the face of medicine for a century. 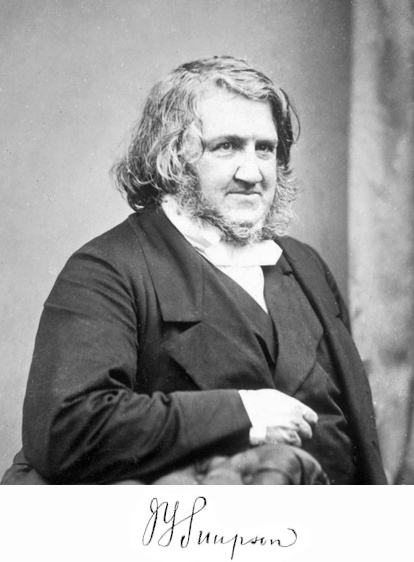 Here is Carter inspecting Tut’s innermost coffin, the coffin, and a view of the tomb before it was explored. Go here to read more. 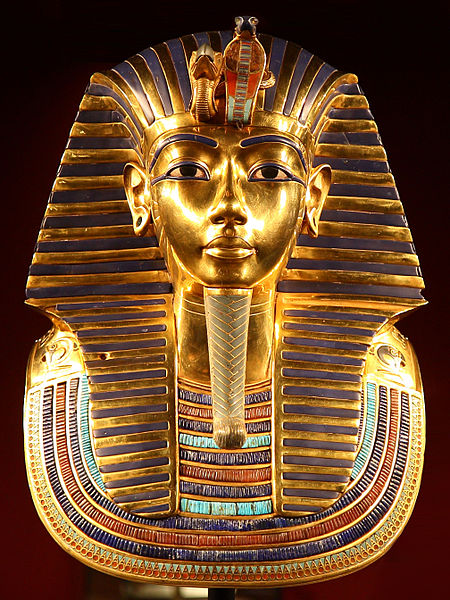 Here’s a Nat. Geo. video (a segment of “Jane”) discussing tool use:

Here, from Wikipedia, is “A group photograph of the fifty-two hostages in a Wiesbaden hospital where they spent a few days after their release.” 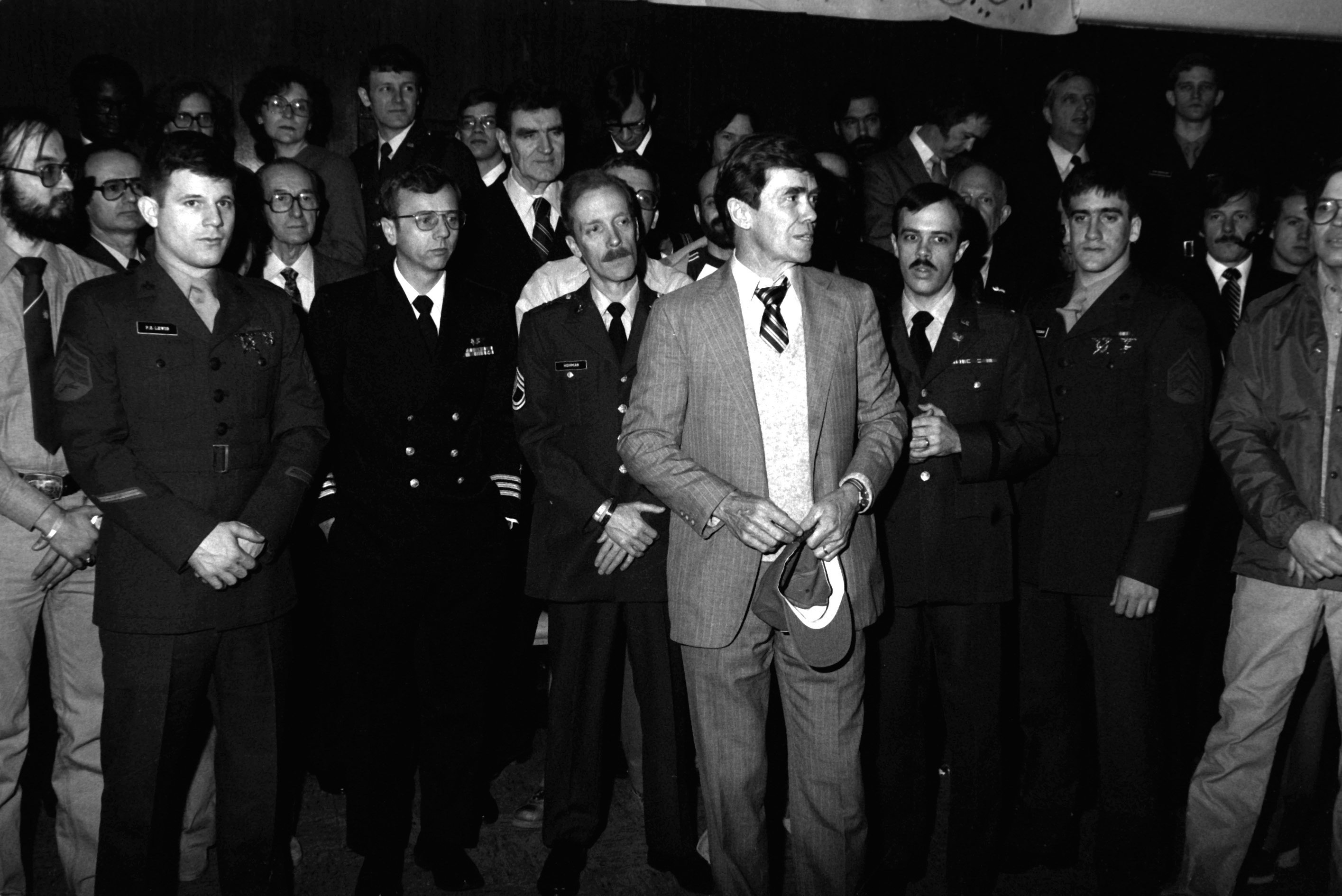 His victory speech was in Grant Park, downtown, and I still regret that I didn’t go.  But the laws of physics denied me that visit: 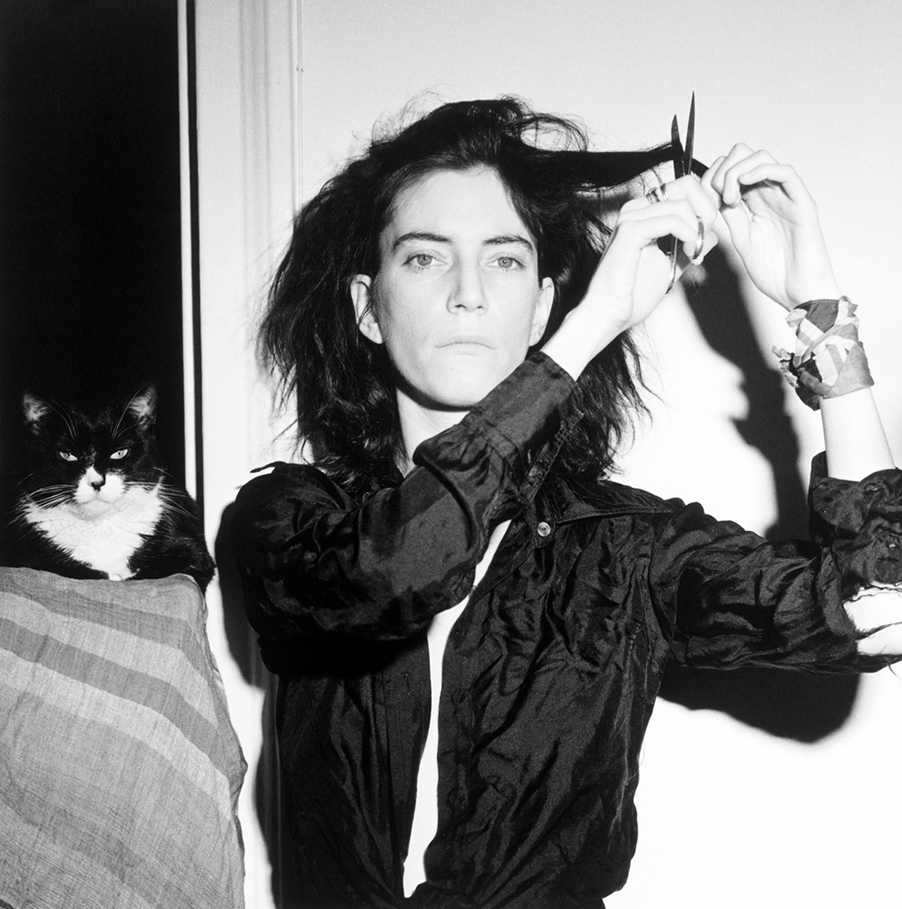 Those whose soul flew the coop on November 4 include:

Owen, below, was killed only 7 days before the Armistice: 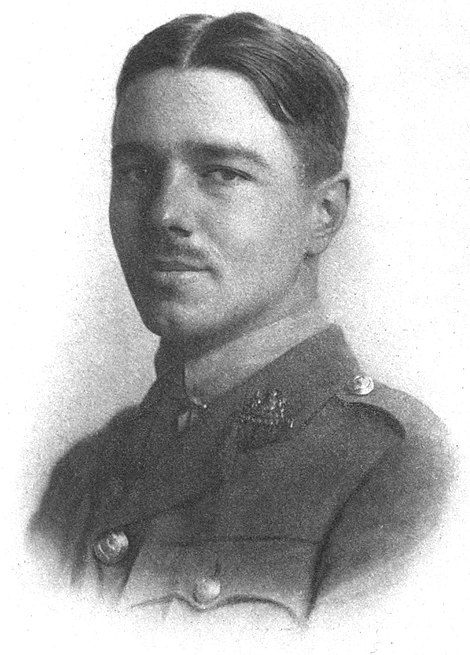 Here’s Rooney, my older alter ego, ranting about purchased bottled water, which I also despise (but drink when in India for safety):

Meanwhile in Dobrzyn: Hili sees affirmation of her status:

Hili: If there are three cats in the house, who is the most important?
A: You.
Hili: I’m just asking. 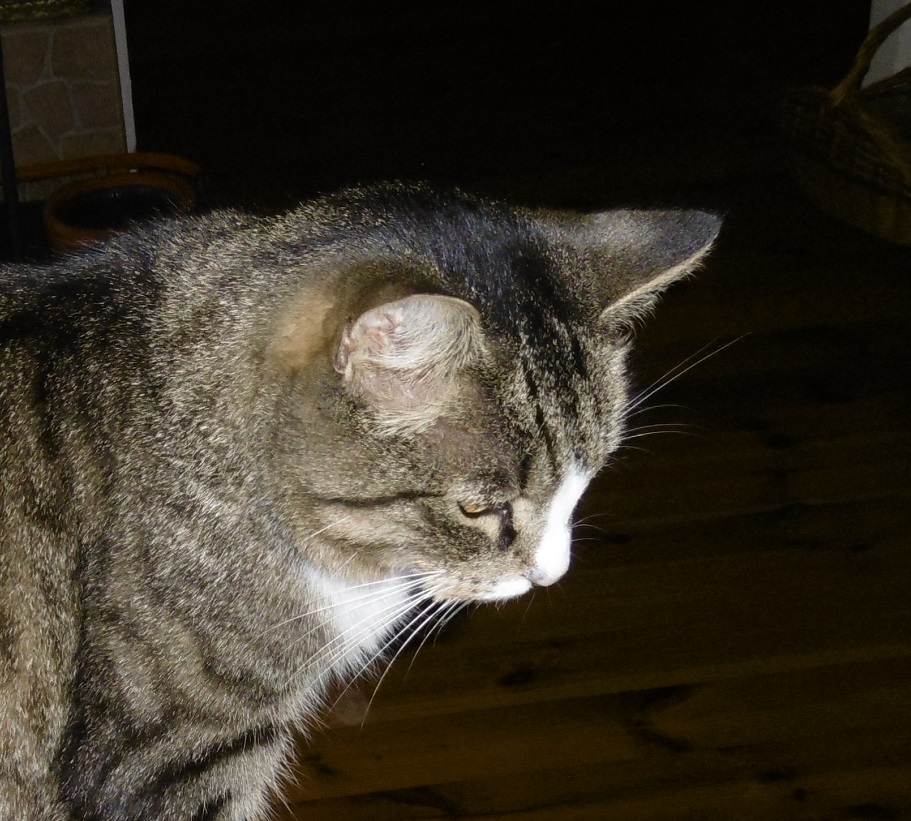 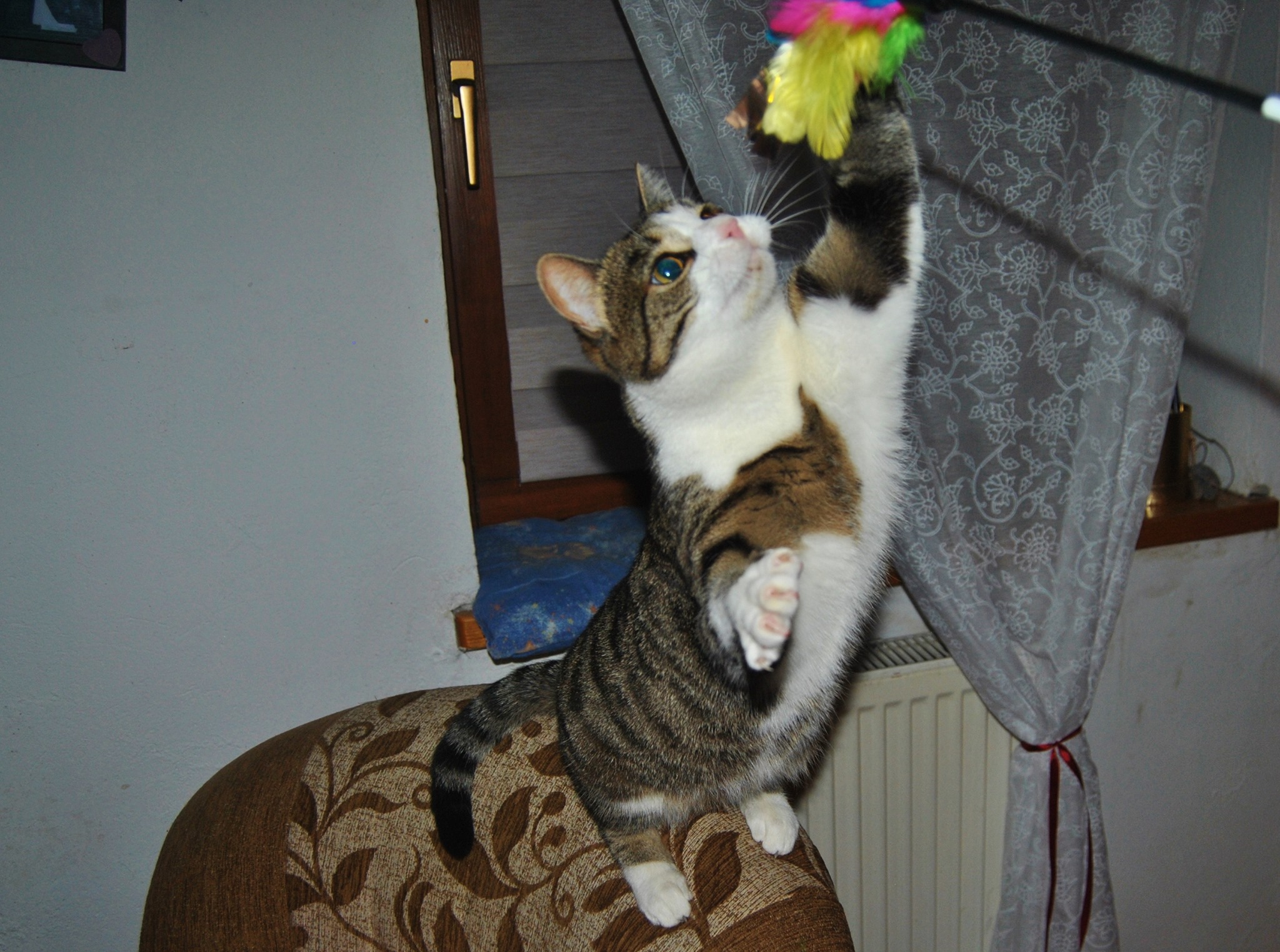 The 2022 Social Justice Kitten Calendar is here! You can order it here and see all the pictures in advance here. Here’s one month’s photo: 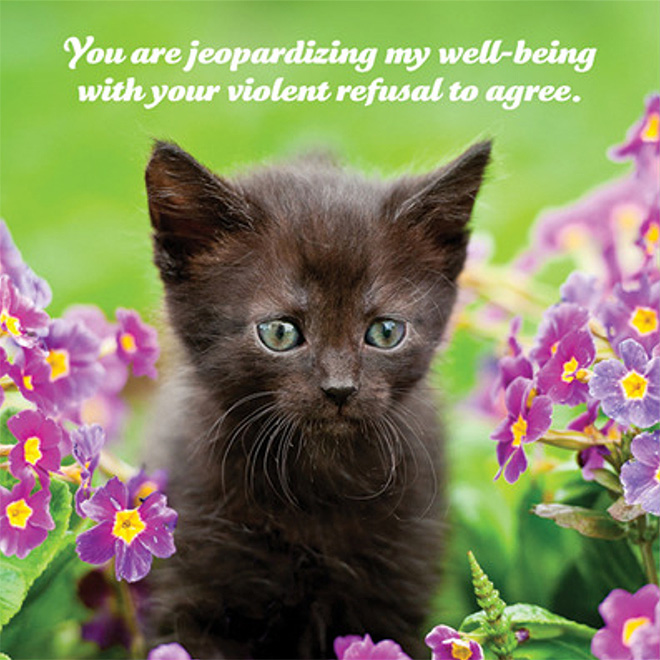 Imagine being so insecure in your belief-system that you would be open to persuasion and debate.

From Paul, an interesting notion to ponder:

What a weird thing it will be if Donald Trump has done less harm to the Republican brand than Robin DiAngelo has done to the Democratic brand.

From Barry: an ass gets its ass scratched, and loves it. Sound up.

Good morning!! 😍
Happy Wednesday & hope you’re as happy as a horse getting butt scritches!🤪
Be good to others & be kind to yourself 😘
pic.twitter.com/gMz4t9ZSWD

From Simon, though I don’t understand what this means, unless there are a lot more people sick of Trump than I think:

Entirely plausible scenario is that GOP has a bunch of good outcomes in 2021/2022 without Trump but then nominates Trump anyway and has a bad 2024. https://t.co/AtqmjXXYNC

In Sept 1944 she was deported to #Theresienstadt ghetto with her mother Berta & sister Marianne Anne. From there they were deported to #Auschwitz on 4 October. All were killed in a gas chamber. pic.twitter.com/2eJLE4W2MI

Tweets from Dr. Cobb, who’s on his way to SPAIN! This isn’t Wally, but seems to be another errant walrus:

They call her Freya. Here she is on deck of a Walrus class submarine called Dolfijn.

Clicking the arrow takes you to a Science article about how cats’ tongues help keep them clean. But I bet you can guess anyway:

How do cats stay so clean? https://t.co/CsS0Np3qfd

Sound up on this one.  The woman is very lucky to be cuddling a duckling. When I slept with the orphans, who lay on my chest (under my hand) or in my armpit, they would often rapidly peck at me like this duckling, which I’m told is to assure the mother that “I”m still alive under here. Take care of me!”