Here we have a case of selection by humans—killing elephants that have tusks because ivory is so valuable—increasing the frequency of tuskless African elephants in Mozambique over a 28-year period. (As we’ll see, only the proportion of tuskless females increased.)  We have similar examples from other species, as in the reduction of horn size in bighorn sheep hunted for their horns as trophies, and the reduction in the size of some fish due to commercial fisherman going after the big ones.

Is this artificial or natural selection? Well, you could say it’s artificial selection because humans are doing the choosing, but after all human are part of nature. And this selection was not conducted to arrive at a given end. Dachshunds were selected to look like hot dogs to root out badgers in their burrows, but the reduction of tusk size in elephant, or horns in sheep, was not a deliberate target of selection, but a byproduct of greed. So I would hesitate to characterize this as artificial selection, since it’s not like breeders choosing a given characteristic to effect a desired change. In fact, the evolutionary change that occurred is the opposite of what the “selectors” wanted.

You can find the article in Science by clicking on the screenshot below, or get the pdf here.  There’s a two page shorter take that’s an easier read, “Of war, tusks, and genes,” here.

The phenomenon: a civil war in Mozambique from 1977 to 1992, which increased the frequency of tuskless female elephants from 18.5% to 50.9%, nearly a threefold increase. Why? A model showed that such a change (which occurs among generations, so it’s not just selective killing within a generation) must have been due to natural selection rather than genetic drift. The killing was motivated by a desire to get money to fund the conflict.  A female without tusks had five times the chance of surviving as a tusked female. That imposed strong selection in favor of tuskless females.

Usually, tuskless elephants are at a disadvantage, for tusks are multi-use features, employed for defense, digging holes for water, male-male competition, and stripping bark from trees to get food. But the natural selection to keep tusks in females was weaker than the “artificial selection” by humans against tusks.

Here’s a photo of a tuskless vs. a tusked female:

And the only kind of male that we see: ones with big tusks (tusk size varies, of course, as they continue to grow as the elephant lives). Tusks are homologous with our incisor teeth. 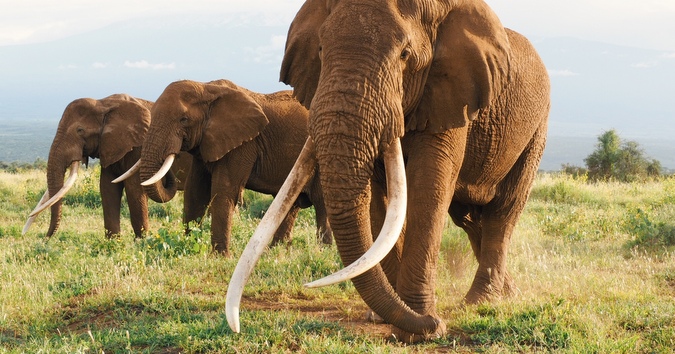 The authors first tried to determine the genetic basis of having versus lacking tusks. It turns out that, by and large, tusklessness behaves not as a complex trait caused by changes in many genes of small effect, but as a single dominant mutation on the X chromosome (like us, elephant males are XY and females are XX). Further, the dominant mutation causing tusklessness is lethal in males, killing them before birth. (This is probably not because the tuskless gene form is itself lethal, but is closely linked to a gene that is a recessive lethal.)

So here are the “genotypes” of the elephants. I’ve used “x” as the gene form on the X chromosome that produces tusks, and “X” as the alternative dominant allele that makes you tuskless.

Males: All have tusks and are thus xY. (Males have only one X chromosome and also a Y.) The XY genotype is lethal, so we never see males carrying the tuskless gene form (XY). Ergo, there are no tuskless males.

We never see XX tuskless females because they’d have to inherit one “X” from from their fathers, but that XY genotype is lethal.

There are a few complications, as other genes are involved (for example tusked mothers, who are xx, produce only 91% of tusked daughters when you’d expect the xx by xY cross to produce 100% xx (tusked) daughters. So things are not quite so simple, but in general a single gene seems largely responsible for the tuskless condition. (You might expect this, because if many genes were involved you simply wouldn’t get females lacking tusks: you’d get females with slightly smaller tusks, who would still be killed for their ivory. It would thus take many generations instead of a couple to raise the frequency of tuskless females.)

I won’t go into the gory genetic details, but the authors sequenced entire genomes from tusked and tuskless males and females and looked for signs of natural selection on some genes, comparing the tusked versus tuskless females. (One sign of rapid selection for tusklessness, for the cognoscenti, is the presence of DNA bases recurrent and common near the gene causing tusklessness.)

The researchers found one X-linked gene form with strong signs of selection called AMELX, which in other mammals codes for a protein that leads to the mineralization of enamel and regulates other tooth-associated genes. Another gene not on the sex chromosome, MEP1a, also is associated with tusklessness, but not as strongly. This gene, too, is known to be associated with tooth formation in other mammals. Here’s the diagram from the paper of which parts of the tusk are controlled by which gene. You can see that AMELX is expressed only in the “tusky” part of the tusk:

The upshot: Human-imposed (“anthropogenic”) selection that causes evolution in the wild has been demonstrated before, so this phenomenon is not new. What is new is that the genes involved in an anthropogenic evolutionary change—the increase in frequency of the tuskless allele, which is evolution—have been identified for the first time, and we know the kind of selection that’s caused the evolution. What is also unusual (I know of no other case) is that selection for tusklessness is in opposite directions (“antagonistic selection”) in the two sexes so long as tuskless females survive better. As the authors note:

Physical linkage between AMELX and proximate male-lethal loci on the X chromosome, such as HCCS, may underpin the proposed X-linked dominant, male-lethal inheritance of tusklessness in the Gorongosa population. If our interpretation is correct, this study represents a rare example of human-mediated selection favoring a female-specific trait despite its previously unknown deleterious effect in males (sexually antagonistic selection). Given the timeframe of selection, speed of evolutionary response, and known presence of the selected phenotype before the selective event, the selection of standing genetic variation at these loci is the most plausible explanation for the rapid rise of tusklessness during this 15-year period of conflict.

What of the future? Even though the conflict is over, poachers continue to kill tuskers for their ivory in much of Africa. What will happen? We expect the frequency of the dominant tuskless allele to increase. That itself will not lead to extinction of the population because tuskless males are simply not produced: all tuskless females will remain Xx and produce half the normal number of males. Tusked females will still be produced as Xx females crossed to xY males will produce both Xx (tuskless) and xx (tusked) females.  But the reduction in the number of males produced by anthropogenic selection, coupled with continual poaching of both males and females with tusks may drive the population size so low, with an unequal sex ratio, that it could become severely endangered.

Since tusks are good for elephants, the solution is not only to ban the trade in ivory, which has been done in part, but some countries continue to trade in elephant ivory. Further, we must stop the poachers cold, as there’s still a market for both legal and illegal ivory, and prices are high. That’s easier said than done given the area that must be monitored. Note, though, that in 2017, Donald Trump lifted the ban on ivory imports from Zimbabwe, which had been put in place by his predecessor. And the elephant is the Republican symbol!