I received a link to this article in an email from Esquire Magazine, which baffles me because I never read the thing and never asked for alerts. Nevertheless, I read the very short article, in which author Charles P. Pierce shows that the draconian new Texas anti-abortion law is explicitly designed to get the Supreme Court to overturn Roe v. Wade. As you know, that law allows abortion in the first and sometimes second trimester of pregnancy. And you may remember that the case was decided in 1973 by a 7-2 vote on the grounds that the the Due Process Clause of the Fourteenth Amendment confers a “right to privacy” that protects a woman’s choice to have an abortion.

Texas’s law, which protects all fetuses that have a heartbeat, even those resulting from rape and incest, is manifestly unconstitutional (heartbeats start about six weeks in), and yet has been affirmed by appeals courts. (The law also is supposed to be enforced by citizen vigilantes.) It’s now before the Supreme Court, with the Dept. of Justice appealing for the Supremes to strike it down. The Court then asked Texas to answer the DoJ’s filing, which is the subject of Pierce’s column.

You can read his piece by clicking on the screenshot, but also be mindful that there is an antiabortion law from Mississippi scheduled to be heard by the Supremes in December. That case, Dobbs v. Jackson’s Women’s Health Organization, is explained by BallotPedia:

The newly-enacted [Mississippi] law prohibited abortions after the fifteenth week of pregnancy except in cases of medical emergencies or fetal abnormalities. The U.S. district court granted summary judgment in favor of the plaintiffs, holding that the law was unconstitutional, and put a permanent stop to the law’s enforcement. On appeal, the 5th Circuit affirmed the district court’s ruling. Click here to learn more about the case’s background.

This violates Roe v. Wade in prohibiting almost all abortions during the second trimester. If the Supreme Court were to reverse the Fifth Circuit’s affirmation of the district court ruling, then it would be overturning—or at least well on the way to overturning—Roe v. Wade.

Now, about the Texas law:

Pierce quotes from page 49 of Texas’s response to the DoJ, and adds this:

On Thursday, Texas filed its answer to the administration’s request that the Supreme Court block the draconian new Texas anti-choice law. In that answer, toward the end, the kitty comes screeching from the burlap.

The federal government criticized Texas for not “forthrightly . . . asking this Court to revisit its decisions.” Texas has done so now.

Despite the Court’s hope that its decision in Casey would “call[] the contending sides of a national controversy to end their national division by accepting a common mandate rooted in the Constitution,” abortion remains a divisive issue. There will always be those who deem abortion “nothing short of an act of violence against innocent human life.” Consequently, there will always be States who seek to protect unborn life through their laws, and there will be those who seek to challenge such laws, unless and until this Court returns the question of abortion to where it belongs—the States.

If the Court decides to construe the federal government’s application as a cert petition, it may also construe this response as a conditional cross-petition on the question whether the Constitution recognizes and protects a right to abortion and whether the Court should reconsider its decisions in Roe v. Wade and Planned Parenthood of Southeastern Pennsylvania v. Casey.

Pierce’s interpretation, which isn’t hard to discern, is this:

Texas is saying that if the Court takes up the administration’s case against a Texas law that essentially repeals Roe in practice, it may consider Texas’s response to be a request that the Court repeal its previous decisions on the subject outright. They don’t care about the gender gap anymore. They don’t really see politics that way anymore. Qui audet adipiscitur, goes the saying.

I don’t think that Texas has been this explicit before, but of course we all know that although most Americans favor Roe v. Wade, religionists and Republicans in particular (there’s substantial overlap) want that ruling in the dumpster. Below are the latest Gallup statistics on what Americans feel about the 1973 decision. Only 32% think that Roe v. Wade should be overturned, while nearly twice that (58%) don’t want it overturned. 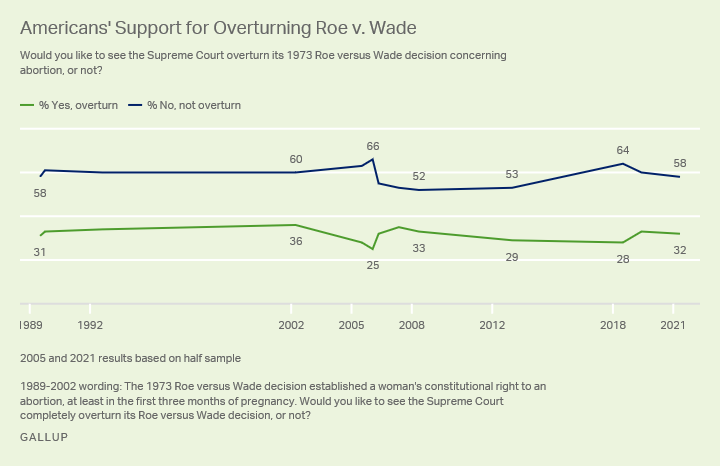 Now of course the Supreme Court is supposed to rule on Constitutionality, not popular support, but given that the Court previously ruled 7-2 in favor of a right to abortion, overturning the law now would be a severe violation of stare decisis. It will be an interesting year for the Supreme Court, but I’m not optimistic.