That’s right, folks, you can hear all the cultural/ideological news here well before the New York Times gets off its tuchas and decides, well, the uproar over firing and cancellation has reached a point where they’d look overly biased if they failed to cover it. And so, in today’s paper, you finally get to read about the unconscionable firing of 82 active, unpaid, volunteer, highly-trained docents by the Art Institute of Chicago (AIC)—13 days after I called it to your attention. (See also here.)

Why were they let go? Because they weren’t sufficiently “diverse,” being mainly, but not exclusively, older white women of means. They had undergone months of training, had to write papers, and did an enormous amount of work—all for the love of art. But the lack of equity did them in. All that expertise, lost. . .   And you know what? The “consolation prize” the AIC gave the ditched docents was a two-year free membership to the AIC. Nearly all of them had worked at the AIC far longer than that.

They were fired by email, and not even by the head of the Art Institute but by Veronica Stein, the executive director of learning and public engagement for the museum’s Women’s Board. They will be replaced by a smaller, less-well-trained group of paid docents ($25 per hour) who will of course be more “diverse”, and that means racially. If the AIC wanted to diversify its docents, which is an admirable endeavor, there are far better and less divisive and injurious ways to do it, as my readers pointed out in the comments. This reprehensible act by the AIC got a lot of people’s dander up, as you can see from the 183 comments on my original post, as well as in the Chicago Tribune‘s and Wall Street Journal’s scathing editorials about the dastardly act.

Now, well after the news cycle has expired, the New York Times decided to report it. Click the screenshot to read: 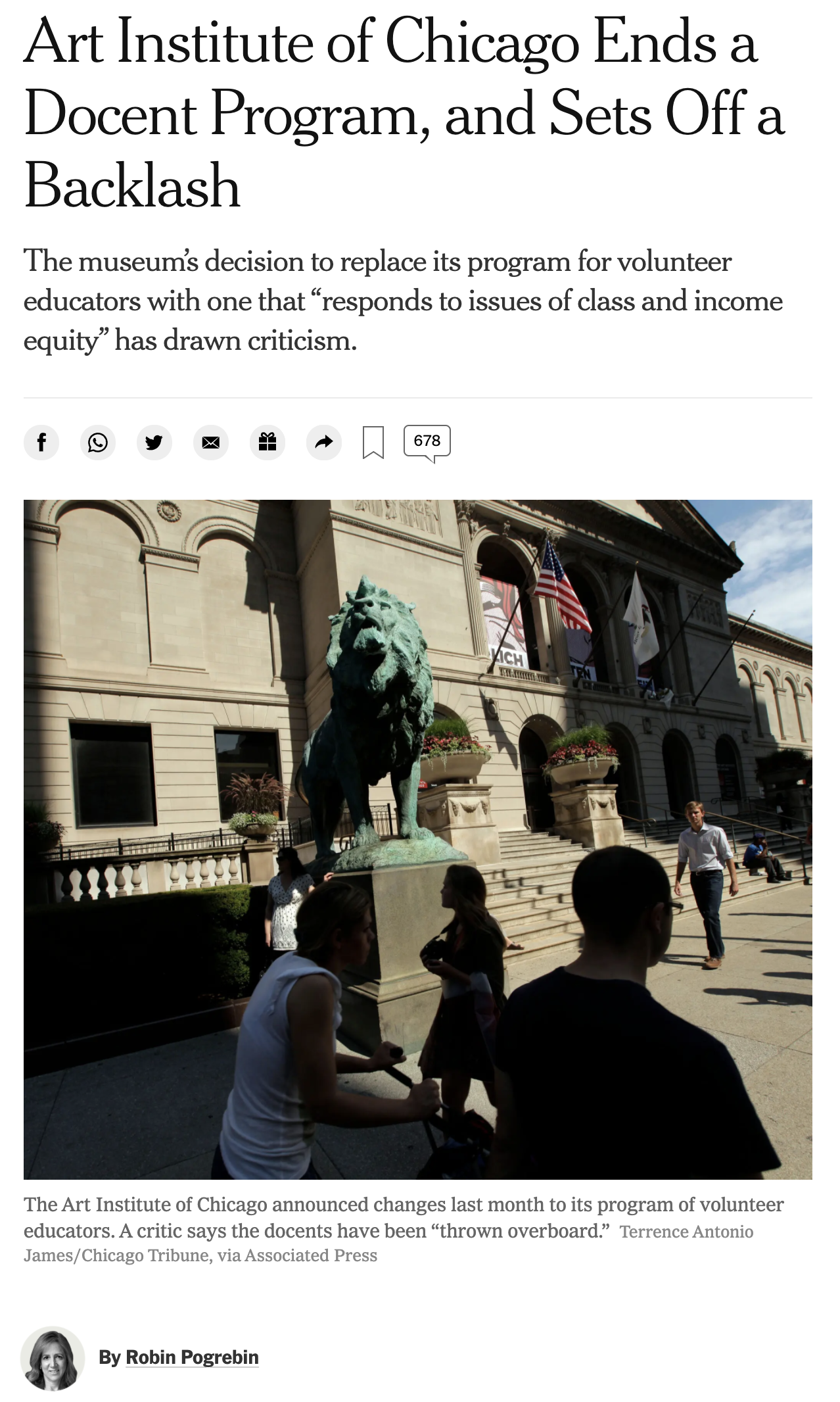 Now there’s nothing wrong with diversity in volunteers, though if you can’t get it (the AIC said it tried and failed), you just don’t go firing those people who have the means to volunteer because they’re white and female. There are better ways. Nevertheless, the NYT article (which doesn’t say more than you’ve read here) says that the AIC director and Stein were both blindsided by the public reaction. What kind of bubble are they living in?

Look at this dissimulation by the AID director, “focused only on his mission”:

James Rondeau, the Institute’s director, said in an interview that the docents program had long been viewed as logistically unsustainable, and that the Institute had stopped adding new volunteers 12 years ago. He said that the recent vitriol had taken a severe toll on the institution and its staff.

“Clearly we were not prepared for this to become a discussion of identity politics,” he said. “We are only focused on our mission.”

If they were discussing canning the docents for 12 years, why didn’t they tell the docents in advance? They heard about this only when they got their emailed “pink slip.”

Ms. Stein in an interview said she had been taken aback by the sharply negative reactions. “The violent, weaponizing language an overwhelming number of people are using in letters and emails to describe the museum’s evolution has been startling, and if I’m being honest, scary,” she said. “As a result, the museum now has increased security. Our frontline staff have already experienced erratic and harmful behavior. Our goal now is getting the facts out and keeping our staff safe.”

Again, this woman is clueless, but note how she raises the trope of the “unsafe staff” and the critical emails and letters as a way to deflect criticism of the AIC. When you do something wrong, try to paint yourself and your institution as victims, and if you can work in the word “safe” or “unsafe,” so much the better. Stein has learned the victimhood role well (note also “scary”).

Stein, who has a degree from the University of Mendacity, adds this:

Ms. Stein said that the museum was simply trying to rebuild the program, and complained that the museum’s motivations and plans had been mischaracterized. “We can lose focus on the amazing opportunity we have to pay educators,” she said, “especially when we live in a society where that is not the standard.”

Well WHY DIDN’T THEY PAY THE DOCENTS?

The NYT notes that museums around the country are assessing their volunteer programs with an eye towards diversity, and that’s fine. Let a million kinds of docent bloom! But you don’t go about the revision by creating more racial division, much less throwing a group of dedicated people overboard simply because of their race and/or gender.

The AIC blew this one big time. It’s kind of heartbreaking to hear the polite but saddened response of the docents themselves.

. . . . Gigi Vaffis, the docent council president, said she and her colleagues “were surprised, disappointed and dismayed” by Ms. Stein’s letter.

“We have such value, knowledge, experience and passion — I wish the museum had recognized what we bring to the table,” she continued. “I wish they would reconsider and bring us back.”

Now that is class!  I hope the AIC does the right thing and reinstates the docents, and then they can pay them while replacing the ones who leave with a more diverse group. But that won’t happen. I hope the AIC pays for its stupidity with a big loss of donations. (I like art, but I hate mendacity.)

One good thing, however, is that this, like the Dorian Abbot affair, is at last being covered by the NYT, so they’re finally paying some attention to the backlash against extreme wokeness.

30 thoughts on “At long last, the NYT covers the Art Institute of Chicago’s DocentGate”