I’ve written twice before about the doings of Anna Krylov, a quantum chemist who’s a Professor of Chemistry at the University of Southern California. She’s had a distinguished career even though she’s still young, but my interest was in her recent piece in the Journal of Physical Chemistry Letters:  “The Peril of Politicizing Science“, which I highlighted in this post.

The piece is a hard-hitting critique of the intrusion of ideology of any sort—from woke to right-wing to Communism—into science, much of the piece based on comparing what happened in Russia (where Anna lived) with what’s happening with the increasing wokeness of science in the U.S. and U.K.  With statements like the one below, her essay aroused both approbation and opprobrium. Kudos to the brave editor who published it!

Just as during the time of the Great Terror [in the Soviet Union], dangerous conspiracies and plots against the World Revolution were seen everywhere, from illustrations in children’s books to hairstyles and fashions; today we are told that racism, patriarchy, misogyny, and other reprehensible ideas are encoded in scientific terms, names of equations, and in plain English words. We are told that in order to build a better world and to address societal inequalities, we need to purge our literature of the names of people whose personal records are not up to the high standards of the self-anointed bearers of the new truth, the Elect. We are told that we need to rewrite our syllabi and change the way we teach and speak.

As an example of political censorship and cancel culture, consider a recent viewpoint discussing the centuries-old tradition of attaching names to scientific concepts and discoveries (Archimede’s [sic] Principle, Newton’s Laws of Motion, Schrödinger equation, Curie Law, etc.). The authors call for vigilance in naming discoveries and assert that “basing the name with inclusive priorities may provide a path to a richer, deeper, and more robust understanding of the science and its advancement.” Really? On what empirical grounds is this based? History teaches us the opposite: the outcomes of the merit-based science of liberal, pluralistic societies are vastly superior to those of the ideologically controlled science of the USSR and other totalitarian regimes. The authors call for removing the names of people who “crossed the line” of moral or ethical standards. Examples include Fritz Haber, Peter Debye, and William Shockley, but the list could have been easily extended to include Stark (defended expulsion of Jews from German institutions),( Heisenberg (led Germany’s nuclear weapons program),) and Schrödinger (had romantic relationships with under-age girls). Indeed, learned societies are now devoting considerable effort to such renaming campaigns—among the most-recent cancellations is the renaming of the Fisher Prize by the Evolution Society, despite well-argued opposition by 10 past presidents and vice-presidents of the society.

I added a link to the last example since I was part of that effort.

At any rate, Wikipedia says this about Krylov’s piece:

Krylov is an outspoken advocate of freedom of speech and academic freedom.  She is a founding member of the Academic Freedom Alliance and a member of its academic leadership committee. Her paper, “The Peril of Politicizing Science,” has received 55,000 views and, according to Altmetric, is the all-time highest-ranked article in the Journal of Physical Chemistry Letters.

Note, though, that Krylov is no opponent of diversity. Like many of us, she is a liberal, and Wikipedia adds this:

Krylov is active in the promotion of gender equality in STEM fields, especially in theoretical chemistry. She created and maintains the web directory Women in Theoretical and Computational Chemistry, Material Science, and Biochemistry, which currently lists more than 400 scientists holding tenure and tenure track academic positions, or equivalent positions in industry, national laboratories, and other leading research establishments. She has delivered several talks on gender equality in STEM including a lecture at the international symposium in Uppsala, Sweden.

Later in August, I reported on a letter written by Krylov and many colleagues to her own university, objecting to public statements by USC’s Department of Gender and Sexuality studies about the Israel/Palestine conflict and the general atmosphere of anti-Semitism at her school.

This is all by way of background for the very short report below. Anna, who was in London, informed me that she had a great trip to the Natural History Museum, one that she documented in some of her pictures of London here.

But there was one fly in the ointment. As she said, “I I was shocked to see these stickers all over the place” in the Museum: 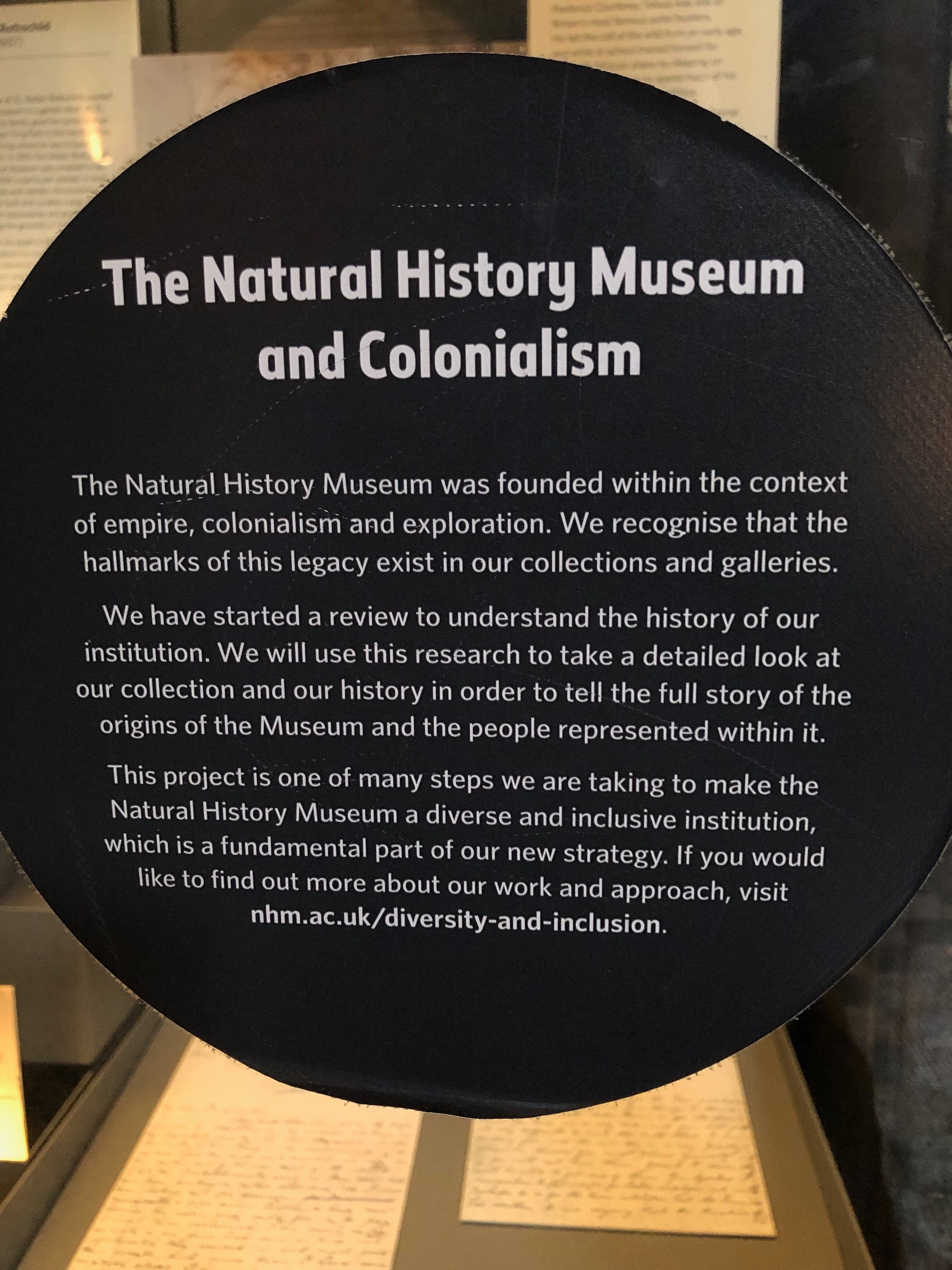 In other words, “Watch this space for self flagellation.”

That sticker bugs me as well. Why does every institution, including  natural history museums, feel that they have to apologize for and somehow rectify the views of our predecessors whose morality doesn’t comport with current views? As Anna said, this isn’t just one sticker—there are many.  I expect that every museum, art gallery, and historical display in the U.K. is going to go this way. They have no choice.

But Anna didn’t just get peeved, she wrote an email to the Museum which I reproduce below with permission (click to enlarge)

If the Natural History Museum responds (I’m not hopeful), I’ll let you know what they say.