I don’t want to write a full review of Andrew Sullivan’s new book, as I just finished a different review for a media outlet, but I want to urge you to read Out on a Limb: Selected Writing: 1989-2021, even if you don’t like Sullivan’s conservatism or religiosity (both are muted in this book). It contains dozens of essays over the 32-year period, arranged in chronological order.  Some are very long, others just a page or two, and I found myself reading all of them over the past several weeks.

Click on the screenshot to go to the Amazon site: 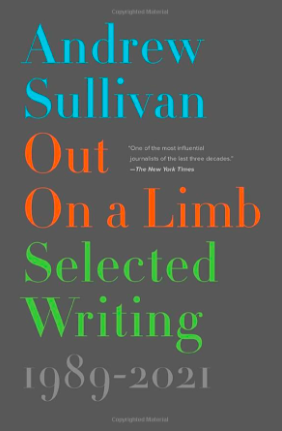 Sullivan is a lovely and thoughtful writer, and, although he puts himself on the rightish end of the political spectrum, many of the essays comport well with liberal thinking. He was, for instance, instrumental in helping gay marriage become accepted in America, and his early essays (e.g., “Here comes the groom” from The New Republic) are powerful arguments for that institution. He touted Obama as a possible and potentially good president long before others were doing so, and shows additional prescience in recognizing Trump not only as a possible winner of the Presidency, but later as a probable winner of the Presidency. (He despises Trump.) He also predicted that Joe Biden would be the best Democratic candidate to beat Trump. (Perhaps he’s picking his essays to look prescient, but I doubt it.)

What I like about Sullivan’s writing is that, unlike many other writers, he’s willing to admit when he’s wrong and remains open to correcting his opinions. Ergo his self-flagellating essay, “How did I get Iraq wrong?” (he was an early booster of the war). His case against torture is ironclad (“The abolition of torture”), and many essays will appeal to readers on the grounds of simple humanity (e.g., his memoriam on the death of one of his beagles, “Surprised by Grief”, a title cribbed and modified from C. S. Lewis; or “Still here, so sorry”, his musings on still being alive years after an AIDS diagnosis).

There is a lot, of course, on AIDS and homosexuality, and it’s good to read this stuff from the viewpoint of a gay writer. The bulk of the essays are on politics, which he knows a lot about. I usually find such essays dry but Sullivan is such a good writer that you get the sense of discussing politics with a friend, not being preached to. Like a good scientist, he’s always considering counterarguments to his positions, another thing that makes him likable.

As I said, he’s surprisingly light on religion—it comes up rarely, except for one long and tedious essay on “What is the meaning of Pope Francis?” But after reading that and his other stuff on faith, I’m no closer than ever to understanding why a smart guy like Sullivan believes in things like the literal resurrection of Christ. So it goes.

Here are a few of my favorite essays, which give an idea of his range:

“Quilt”, a touching piece on the AIDS Quilt.

“When plagues end: Notes on the twilight of an epidemic”. About the tapering off of the AIDS epidemic and Sullivan’s remembrance of its worst days.

“What’s so bad about hate?”  A long and absorbing essay on the uses, abuses, and varieties of hatred.

“The abolition of torture”: an eloquent argument that any torture is the sign of a totalitarianism and is to be totally rejected as a tool of Americans.

“Why I blog”: a very thoughtful piece that especially resonated with me, as it draws a distinction that those of us understand who write both for publication in the media as well as on a website. They’re very different forms of writing, and each has its advantages and disadvantages.

“I used to be a human being”: A tale of Sullivan’s week at a meditation center completely disconnected from the Internet, combined with an acute and scathing analysis of what absorption in our “devices” has done to us.

“We all live on campus now”. A favorite of mine, which dispels the idea that insane leftist extremism found on colleges campus will not spread to the greater culture because the kids will grow up. (It already has spread, as you know, and is not going away.)

And the two final pieces:

“The unbearable whiteness of the classics”: An anti-Woke critique of the anti-classics classicists, defending the classics and showing that they can be taught alongside the history of racism.

“Two sexes, infinite genders”: A distinction between gender and sex (one that seems to be disappearing) and a touching remembrance of Sullivan’s father.

It’s good to have a book of essays on hand, like Sullivan’s or Orwell’s, to fill in the gaps when you don’t have time to absorb a chunk of a novel. And of course there’s a long-standing literary niche for short non-fictional pieces. Sullivan is a master of them, and although none of us are fans of all his ideas (the religion still bothers me), you come away from this book feeling as if you really know the guy—and like him.