Well, call me stupid, but I thought that Eric Clapton’s musical genius would extend into other areas, too. Thus I was gobsmacked when he became an ardent antivaxer, letting me down three times by opposing antivaccination restrictions, opposing the shot itself (though he got two AstraZeneca jabs), and releasing two anti-vax songs, “This Has Gotta Stop” and “Stand and Deliver,” the latter with Van Morrison.

Now, as Rolling Stone reports (click on screenshot below), Clapton is funding a band, Jam for Freedom. whose sole purpose appears to be to oppose vaccination:

Eric Clapton not only donated more than $1,300 to a GoFundMe posted by a vaccine skeptical music group, but he also lent the “pro-medical choice” band his family’s personal Transporter van to use for touring around the country, Rolling Stone reports. A musician for the group Jam for Freedom, known for songs with lyrics like, “You can stick your poison vaccine up your arse,” told the magazine that when he saw the donation he thought he was being tricked, until he received a text from the 76-year-old singer-songwriter himself. “It was something complimentary, along the lines of, ‘Hey, it’s Eric—great work you’re doing,’” McLaughlin said. Though he declined to say how much, McLaughlin also told the magazine that Clapton gave them more money to buy a new van and said he might play with the group in the future. 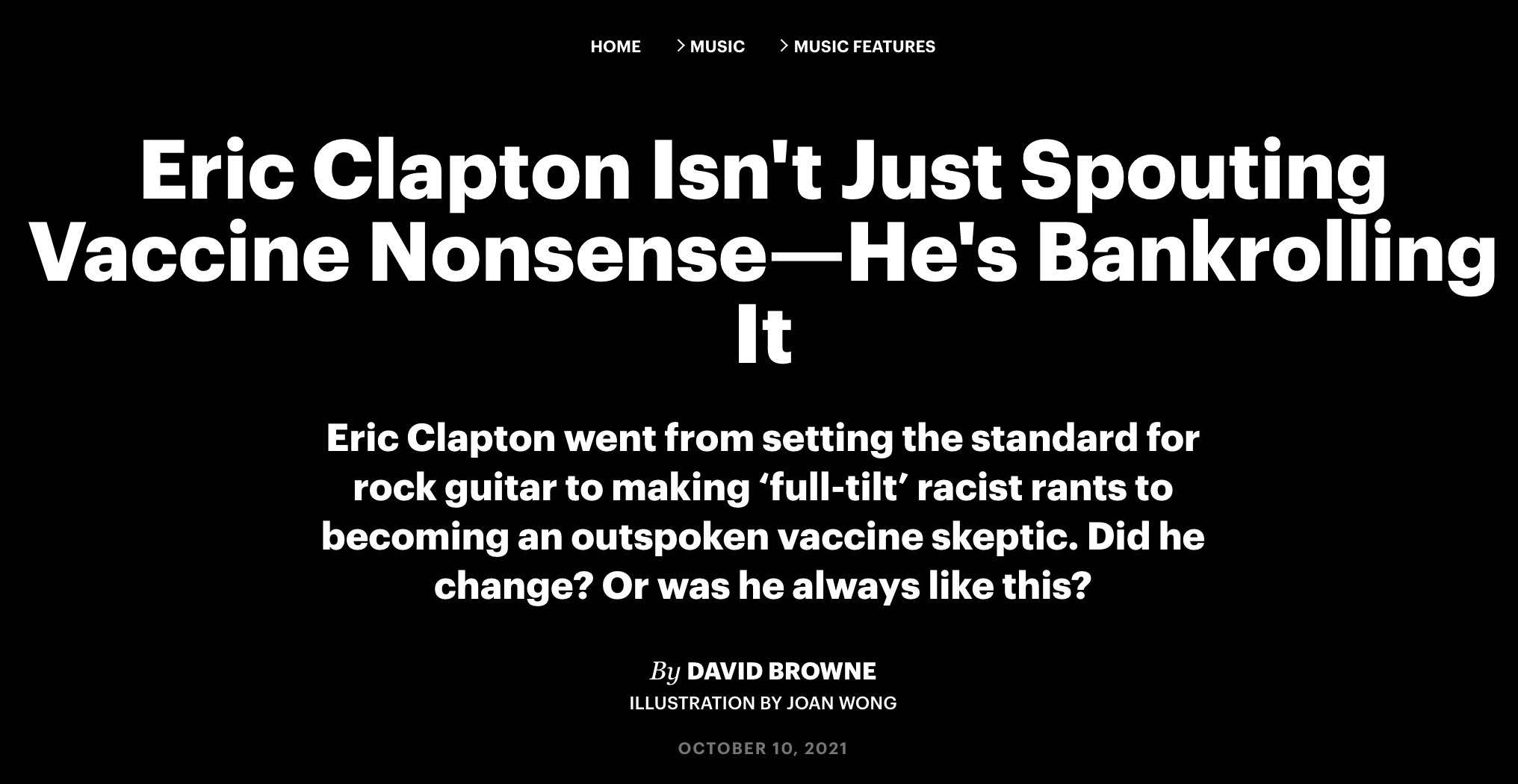 Clapton apparently is becoming (or always was, but kept it quiet) a conservative, and maybe even a racist.  There were those comments at a concert in 1976, which I didn’t know about until they surfaced recently. The magazine reports those, too:

In the summer of 1976, Dave Wakeling thought he knew Clapton, too. Wakeling, who’d go on to found the English Beat, one of the U.K.’s pioneering ska bands, was 20 that year, and such a big Clapton fan that he’d once hitchhiked from his Birmingham home to London to see Clapton’s band Blind Faith in Hyde Park.

But when he saw Clapton at the Odeon theater in Birmingham in August 1976, Wakeling was gob-smacked. A clearly inebriated Clapton, who unlike most of his rock brethren hadn’t weighed in on topics like the Vietnam War, began grousing about immigration. The concert was neither filmed nor recorded, but based on published accounts at the time (and Wakeling’s recollection), Clapton began making vile, racist comments from the stage. In remarks he has never denied, he talked about how the influx of immigrants in the U.K. would result in the country “being a colony within 10 years.” He also went on an extended jag about how “foreigners” should leave Great Britain: “Get the wogs out . . . get the coons out.” (Wog, shorthand for golliwog, was a slur against dark-skinned nonwhites.)

“As it went on, it was like, ‘Is this a joke?’ ” Wakeling recalls. “And then it became obvious that it wasn’t. . . . It started to form a sort of murmur throughout the crowd. He kept talking, and the murmurings started to get louder: ‘What did he fucking say again?’ . . . We all got into the foyer after the concert, and it was as loud as the concert: ‘What is he fucking doing? What a cunt!’ ”

When Clapton voiced support onstage for the conservative British flamethrower and fascist Enoch Powell, a prominent anti-immigration politician who had given his polarizing “rivers of blood” speech on the topic in Birmingham in 1968, Wakeling was particularly offended. Thanks to white and black workers toiling together in its factories, Wakeling had sensed that Birmingham had become more integrated in recent years.

Make this breaking my heart for the fifth time.

Clapton later tried to explain away those comments, saying they weren’t really racist, but his excuse isn’t very convincing (read the piece).

Finally, Clapton vowed that he would never play in a venue that required vaccination, and is scheduling his tours according to that dictum:

Clapton recently embarked on a U.S. tour booked in red states despite surging transmission numbers and death rates — and at venues that largely don’t require proof of vaccination. In the process, this Sixties icon, who embraced the sex, drugs, and rock & roll lifestyle as much as anyone in his generation, has drawn praise from conservative pundits. In Austin, he posed for backstage photos with Texas’ anti-vax-mandate Gov. Greg Abbott, known for his attacks on abortion and voting rights. The sight of Clapton in backstage photos with the notorious governor amounted to a deal killer for some: “I just deleted all my Clapton songs,” went one comment on Abbott’s Twitter feed, along with, “A Kid Rock type with better guitar skills. Done with him.”

However, as Rolling Stone reports in a separate article, Clapton broke that vow, too, playing a venue on Sept. 18 that mandated testing or jabs:

He broke that absurd promise by playing Smoothie King, which, according to its website, is following New Orleans regulations that require all ticketholders 12 and above, as well as staff and participants, to either prove they have received at least one dose of a Covid-19 vaccine or provide a negative test taken within 72 hours. Moreover, they must wear a mask while not eating or drinking.

Well, fine, though it does show that he isn’t holding to his convictions.

What happened to Clapton? The Rolling Stone piece above is long and detailed, and advances some ideas that you’ll want to read if you’re a Clapton fan.

72 thoughts on “Eric Clapton breaks my heart for the fourth time, bankrolling an anti-vaxer band”