As I mentioned this morning, two journalists, who are used as exemplars of all courageous journalists fighting for free expression, were awarded the Nobel Peace Prize. The winners are Maria Ressa and Dmitry Muratov, the former working in the Philippines and the latter in Russia. The Committee gave them the prize for

their efforts to safeguard freedom of expression, which is a precondition for democracy and lasting peace. Ms Ressa and Mr Muratov are receiving the Peace Prize for their courageous fight for freedom of expression in the Philippines and Russia. At the same time, they are representatives of all journalists who stand up for this ideal in a world in which democracy and freedom of the press face increasingly adverse conditions.

In some sense, all journalists who follow Ressa and Muratov’s path have a share in this Prize.

The Committee describes their work:

Maria Ressa uses freedom of expression to expose abuse of power, use of violence and growing authoritarianism in her native country, the Philippines. In 2012, she co-founded Rappler, a digital media company for investigative journalism, which she still heads. As a journalist and the Rappler’s CEO, Ressa has shown herself to be a fearless defender of freedom of expression. Rappler has focused critical attention on the Duterte regime’s controversial, murderous anti-drug campaign. The number of deaths is so high that the campaign resembles a war waged against the country’s own population. Ms Ressa and Rappler have also documented how social media is being used to spread fake news, harass opponents and manipulate public discourse.

Dmitry Andreyevich Muratov has for decades defended freedom of speech in Russia under increasingly challenging conditions. In 1993, he was one of the founders of the independent newspaper Novaja Gazeta. Since 1995 he has been the newspaper’s editor-in-chief for a total of 24 years. Novaja Gazeta is the most independent newspaper in Russia today, with a fundamentally critical attitude towards power. The newspaper’s fact-based journalism and professional integrity have made it an important source of information on censurable aspects of Russian society rarely mentioned by other media. Since its start-up in 1993, Novaja Gazeta has published critical articles on subjects ranging from corruption, police violence, unlawful arrests, electoral fraud and ”troll factories” to the use of Russian military forces both within and outside Russia.

Ressa worked for two decades as a lead investigative reporter for CNN and her activities have landed her in trouble. The New York Times adds this:

Ms. Ressa — a Fulbright scholar, and a Time magazine Person of the Year for her crusading work against disinformation — has been a constant thorn in the side of President Rodrigo Duterte, her country’s authoritarian president.

The digital media company for investigative journalism that she co-founded, Rappler, has exposed government corruption and researched the financial holdings and potential conflicts of interest of top political figures. It has also done groundbreaking work on the Duterte government’s violent antidrug campaign.

Both of these journalists are of course putting their lives in jeopardy with their reporting, which is clearly the point of this year’s Prize: freedom of expression in the face of repression. The NYT says this of Muratov:

Mr. Muratov has defended freedom of speech in Russia for decades, working under increasingly difficult conditions.

He was one of the founders of the independent newspaper Novaya Gazeta in 1993, and he has been the newspaper’s editor in chief since 1995. Despite a near constant barrage of harassment, threats, violence and even murder, the newspaper has continued to publish.

Since its start, six of the newspaper’s journalists have been killed, including Anna Politkovskaya, who wrote revealing articles about the war in Chechnya, according to the committee.

“Despite the killings and threats, editor in chief Muratov has refused to abandon the newspaper’s independent policy,” the committee wrote. “He has consistently defended the right of journalists to write anything they want about whatever they want, as long as they comply with the professional and ethical standards of journalism.”

Ms. Ressa has faced multiple criminal charges for the way her news website Rappler has challenged the rule of President Rodrigo Duterte. Both she and Mr. Muratov, whose Novaya Gazeta newspaper has been a persistent critic of President Vladimir V. Putin, work under governments that use a range of methods — from repressive legislation to arrests — to muzzle criticism.

Not just arrests in Russia, but murder. I think Muratov’s a bit safer now that he has a Prize: would Putin’s thugs dare to murder a Nobel Laureate?

Sweden is sending a message to the world at a time when freedom of expression is under siege in many places, including the U.S. and Britain. It may also be a message to those citizens who try to punish journalists and writers who produce stuff they don’t like (Salman Rushdie and Charlie Hebdo come to mind).

This is an unexpected prize, as some readers thought it would surely go to Greta Thunberg for her advocacy of work on climate change. But she’s young, and there is time.

Here are the winners: 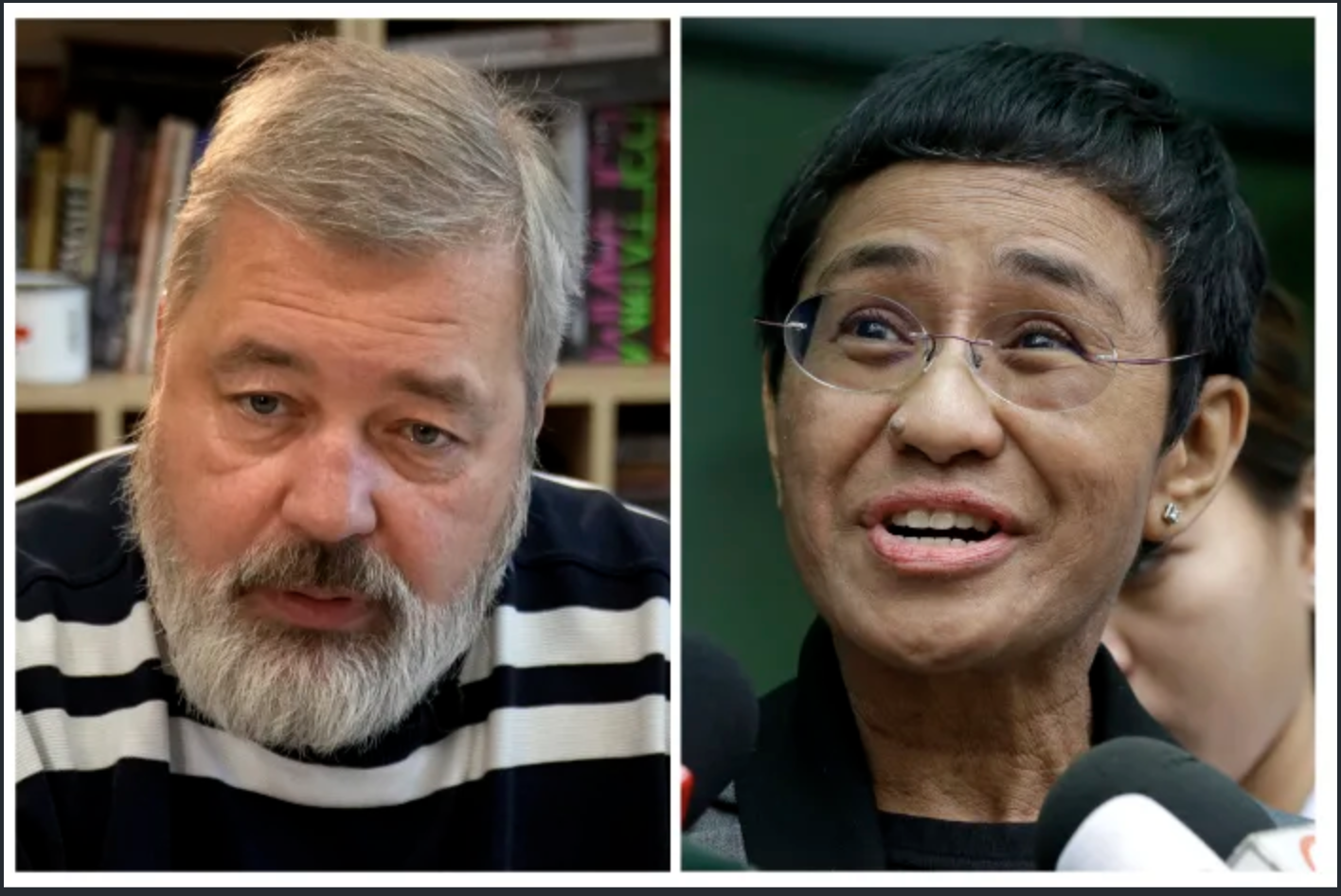 Here’s Ressa’s reaction when she gets the call from Sweden. Sound up! You can also hear what “The Call” consists of:

WORLD EXCLUSIVE: The call from Oslo.

Hear Maria Ressa’s reaction when she hears the news from Olav Njølstad, Secretary of the Norwegian Nobel Committee, on being awarded the 2021 #NobelPeacePrize just before the public announcement. "I'm speechless!"
#NobelPrize @mariaressa pic.twitter.com/Zxy20nzWvd