Reader Steve sent a link to a post with a provocative title by journalist Zaid Jilani on Persuasion. Click on the screenshot to read: 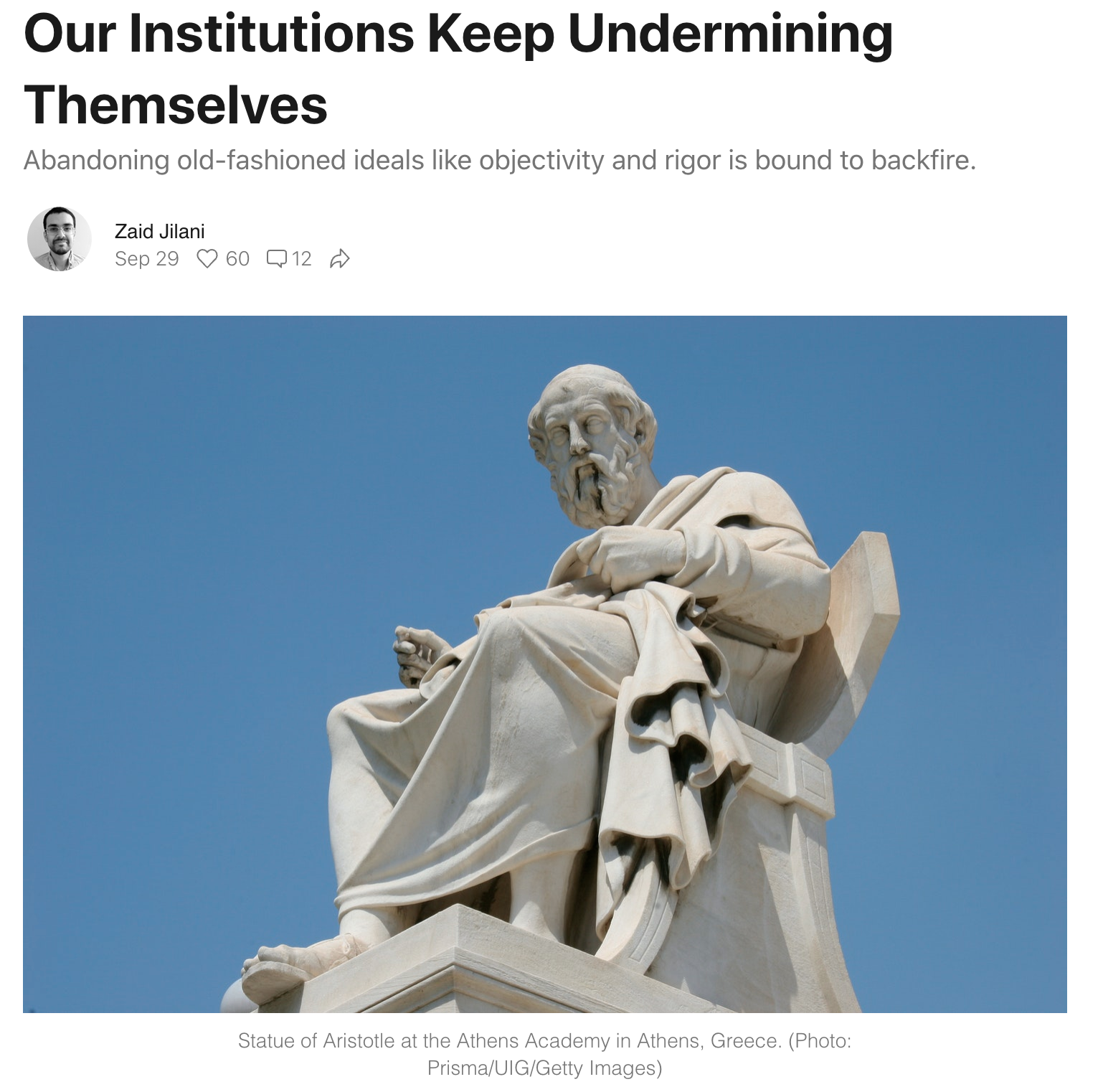 The “view” that Jilani discusses—that objectivity and rigor are overrated and even “harmful”, “rooted in racism ableism and classism”—comes from Lauren Farrell, a researcher at the respected Urban Institute. More on that in a minute.

What Jilani means by “undermining”—and he gives a few examples—is that if institutions like think tanks and universities keep denying the existence of truth or the validity of objectivity (it’s all a matter of lived experiences and clashes of power, don’t you know?), and keep characterizing the tools of science and rationality as instruments of oppression, then they undermine their own credibility in two ways.  First, these assertions often look dumb and even racist in themselves—so dumb that they’re sometimes retracted.

Here’s one of the misguided (and ultimately retracted) critiques of rationality that I wrote about (and showed the graphic) in July of last year.  (Jilani’s words are indented)

Farrell is not alone in this view. Last summer, the Smithsonian Institution’s National Museum of African American History and Culture published a graphic on its website that depicted “objective, rational linear thinking” as a facet of “whiteness & white culture.” Facing criticism, the museum later removed the graphic, but the fact that one of America’s pre-eminent cultural and historical institutions allowed this to happen is a sign of how far the attack on the scientific method has gone.

Yet objectivity and rigor, far from promoting racism, have often provided the data that serve as the antidote to racism. Look at the example of W. Montague Cobb, an African-American physician and professor of anatomy who used the scientific method to help debunk racial aspects of biodeterminism, which claims that different “races” of people had fundamentally distinct bodies that made some inferior or superior to others.

Second, organizations undermine themselves by their very claim that they are steeped in “structural” racism, misogyny, and other noxious traits. If that’s indeed the case, why would anybody trust them, or believe what they say? Here’s an example from Princeton University:

When the Urban Institute publishes a blog post criticizing fundamental research practices, it undermines its legitimacy as an arbiter of the truth. The same is true when, for instance, Princeton University’s president writes a letter telling the world that “racism and the damage it does to people of color nevertheless persist at Princeton” and that racism is “embedded in structures of the University itself.” Why would the public trust information coming from a racist institution, or one labeling itself as racist when it really isn’t?

Two more examples of Princeton’s suppression of free speech or denial of objectivity can be seen here and here.  I believe somebody reported Princeton to the government for racial bias since the University admitted its own endemic racism, but I don’t think the complaint went anywhere.

Anyway, back to Farrell’s beef against the standards of scholarship and truth-finding. This is what Jilani says:

The Urban Institute is one of America’s most storied think tanks. For half a century, it has produced high-quality research that has helped guide American policymakers as they tackle major domestic policy challenges.

Part of what makes the organization’s work so valuable is that it’s produced in an environment that values rigor and objectivity. Regardless of whether you agree with their policy recommendations or political lean—they tend to argue in favor of progressive solutions—you can count on their research being thorough and reliable.

That’s why it was so alarming to see a recent Urban Institute blog post by one of its policy analysts, Lauren Farrell, that argues that we should rethink the very concept of impartial research. She warned that the research practices of “objectivity” and “rigor” are “harmful” and “rooted in racism, ableism, and classism.”

Click on the screenshot to read Farrell’s post (which, I emphasize, should not be seen as the Urban Institute’s own views): 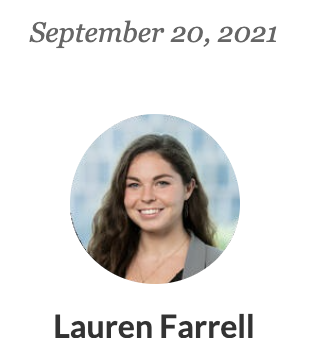 Below are some excerpts from Farrell’s piece:

Research is a powerful tool to determine fact from fiction. Policies, programs, and solutions are grounded in these facts, making researchers agents for shaping how the world works.

However, long-standing values and practices rooted in racism, ableism, and classism are ingrained in the fabric of research, leaving many researchers unaware of the harm they are causing. Researchers can counteract harmful aspects of these practices by sharing power with the people and communities they study.

Note the undocumented assertion that the fabric of research itself (and I assume she includes scientific research) is infused with racism, ableism, and classism. She includes a link to “neo-eugenic” studies of race, but it’s one link, concentrating almost exclusively the exaggerated and misleading claims of British science writer Angela Saini, whose ideas I’ve criticized before (see here and here).  Beyond that, there’s no evidence that research methods in all fields are rotten with bigotry.

Below is where Farrell goes after research practices themselves. I need not comment; you can look up the links for yourself (Saini appears again) and decide whether you want to distrust all research because it’s deeply rooted in bigotry:

Harmful values and practices include the following:

As for “exclusive funding”, I know that in science, at least, the two major funding agencies, The National Institutes of Health and the National Science Foundation, are making huge efforts to fund underrepresented groups as well as promote research in the area of DEI. And a study that everyone ignores showed that an analysis of grant scoring of NIH applications showed no evidence for racial or gender bias. Despite Francis Collins’s assertion, the NIH, at least, seems to harbor no tangible “structural bias”.

I can’t speak for the humanities or sociology, but, knowing academia, I suspect that, like the NSF and NIH, they’re eager to fund minority investigators, hire minority faculty, and study problems of inequality.

As Jilani notes, Farrell’s statement provoked Sarah Wartell, President of the Urban Institute, to issue this statement on September 23 (Farrell’s post went up three days before). It is clearly meant as pushback against Farrell’s claims.

Statement by Sarah Rosen Wartell, President of the Urban Institute

Urban Institute researchers are independent and empowered to share their views and recommendations shaped by their work. Posts on Urban Wire, Urban’s blog, and other products represent individual authors’ views and not Urban policy. The Urban Institute does not take positions on public policy issues.

As an organization, the Urban Institute continuously strives to conduct rigorous, objective research to improve lives and communities. That rigor is a hallmark of what we do. Many researchers at the Urban Institute have been considering how to shape and evolve the research and communications processes to ensure that our work is inclusive and respectful, trying to understand how assumptions and biases may influence our work.

We aim to be a trusted source for insights that help decisionmakers better understand today’s challenges and for evidence that inspires solutions.

What Wartell is doing here is asserting the hegemony of objectivity and rigor in her Institute’s research, implicitly denying Farrell’s accusations. She was forced to do this because, as Jilani notes, Farrell was undermining the credibility of her own employer, the Urban Institute.

All too often the claims that research is rotten with bigotry comes without supporting evidence, and what “evidence” is offered is often the misleading assertions of another person. Of course some researchers are bigots—how could they not be given that their humans. But the notion that the foundations of scholarly research are being consumed by racist termites is ludicrous to anyone who’s familiar with “non-Woke” scholarship as, for example, practiced by scientists.  The research that is dubious, is, in fact, the kind of research that Farrell wants to see: tendentious and ideologically motivated “studies” whose conclusions are determined before the work is done.

For a related take on how universities are transitioning from “teaching to [ideological] training”, read the article below by Justin Sider in The Chronicle of Higher Education. Click on the screenshot (h/t Ben):

45 thoughts on “Institutions’ self-flagellation undercuts their own credibility”