The class below, found on the Princeton University course website, asks two questions:

2.) Does the presence or absence of women (and other marginalized individuals) lead to the production of different kinds of scientific knowledge? 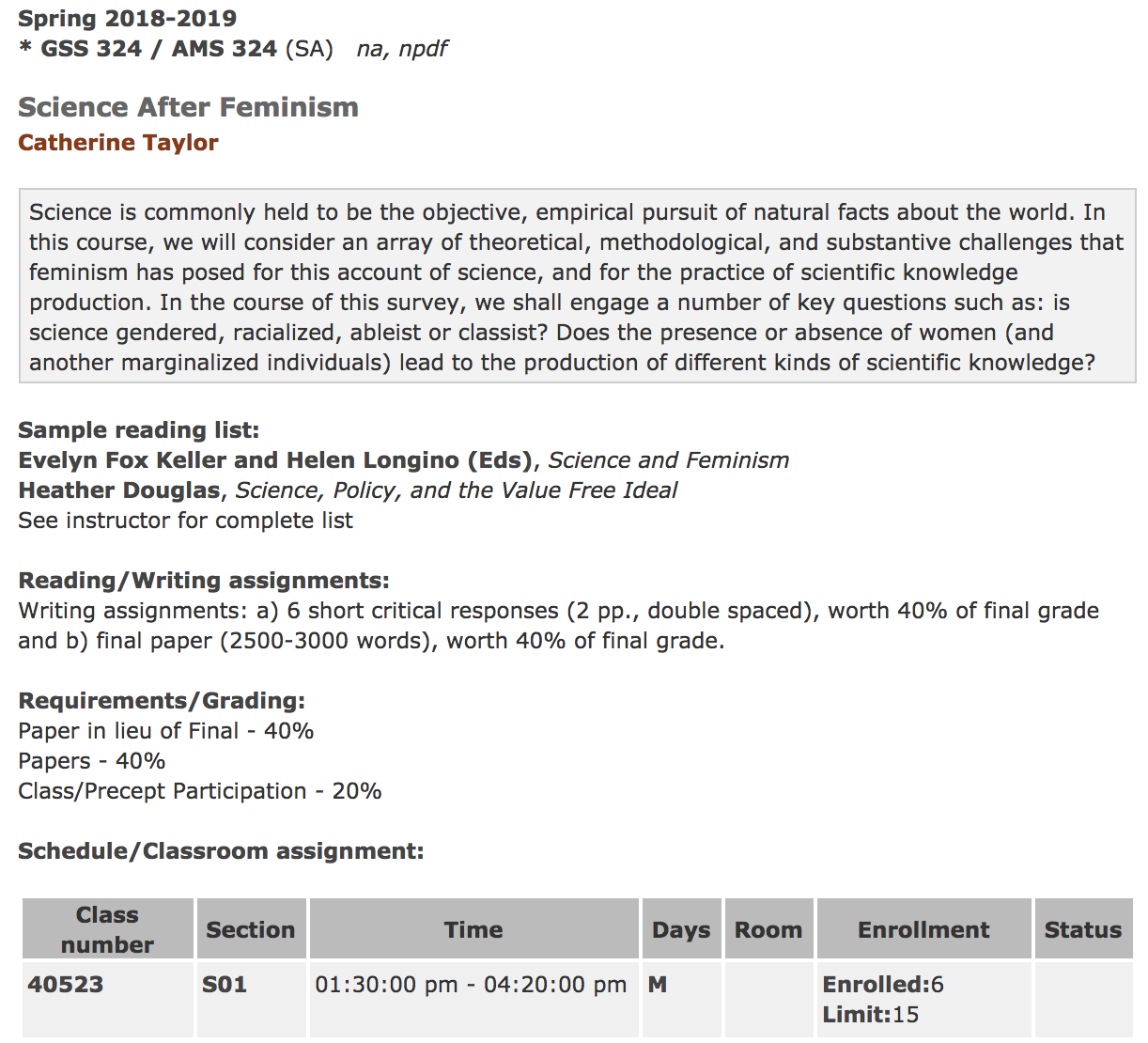 Do any of you doubt for a moment that the answer to both questions is “yes”? (My answers to both would be “no”, since while some scientists may be bigots, science itself cannot be, as it’s simply a method for producing knowledge.) And I’d argue against anyone who claims that different sexes or ethnic groups will produce “different kinds of scientific knowledge”. Maybe they’ll ask different questions, and if that’s what Catherine Taylor means, fine, but there are already plenty of women scientists who ask exactly the same type of questions, in the same way, as do men scientists. Check out Jennifer Doudna and Emmanuelle Charpentier’s work on CRISPR/Cas9, which builds on work by a whole community of scientists of different sex and nationality. Doudna and Charpentier approach molecular biology in exactly the way everyone else does.

In fact, if the answers to the course’s questions were “no”, there would be no need for such a course. What we have here is a semester-long exercise in confirmation bias.

Evelyn Fox Keller, in her biography of Barbara McClintock, A Feeling for the Organism, argued that McClintock, in finding mobile genetic elements, was expressing a female quality of empathy, of letting the organism (in her case corn) tell you what’s going on (see here for a precis of that thesis).  I did not find Keller’s thesis convincing, as I have never seen—nor did I see in McClintock—a distinctively female way of approaching research. (Note that Keller is an editor of one of the course’s texts.)

That is not, of course, to claim that science is a male-oriented way of doing research, despite the fact that science was, because of sexism that limited the opportunities of women, developed largely by men. The tools that produce truth—hypothesis testing, criticism, interrogating nature, and falsification, and so on—have been developed over the centuries by trial and error: seeing what techniques give us reliable knowledge. Those methods aren’t, and cannot be, limited to or characteristic of one sex. We use what works, not what flatters particular sexes, ethnicities, or classes.

But I digress. The course above is an embarrassment for a school of Princeton’s reputation. It is simply social-justice propaganda that will distort science for ideological ends. It’s dubious scholarship, a waste of the students’ tuition money, and unlikely itself to produce new knowledge. It will produce clones that parrot Clune-Taylor’s ideology.

It’s taught by Catherine Clune-Taylor, a postdoctoral research associate in Gender and Sexuality Studies at Princeton. (In general, I don’t favor courses being taught entirely by postdocs.) Her thesis at the University of Alberta was ““From Intersex to DSD: A Foucauldian Analysis of the Science, Ethics and Politics of the Medical Production of Cisgendered Lives.” Enough said.