Yesterday we discussed the Guardian’s “long read” on the life of Steve Pinker and his new book, Rationality: What It Is, Why It Seems Scarce, Why it Matters, which came out two days ago. We can expect a passel of publicity surrounding this book, including reviews, critiques, and interviews with Steve. I’m not going to highlight them all, of course, but the piece below, published in Quillette, is of interest because it’s an actual excerpt from the book and gives you a sense of its theme as well as its style. If you’re contemplating buying the book—which at 428 pages is a mere pamphlet compared to his bigger “doorstop” books—you’ll want to read it.

I for one thought the excerpt (probably the beginning of the book) was very good, though of course I’m biased. But I think anybody with a sense of prose has to admit that the writing is clear, succinct, and engaging, larded with Steve’s usual references to popular culture. Click on the screenshot to read for free.

One of his main points, which he’s alluded to before, is that we cannot justify using reason from some kind of theory or first principle. (The same goes for the toolkit of procedures we call “the scientific method”, which of course stems from reason.) We use reason mainly because it works in helping us find the truth, and that is justification enough. Here’s his definition of reason, which he sees as closely aligned with but not identical to “logic”. There is also no alternative to reason if you want to have a productive discourse.

My own position on rationality is “I’m for it.” Though I cannot argue that reason is dope, phat, chill, fly, sick, or da bomb, and strictly speaking I cannot even justify or rationalize reason, I will defend the message on the mosaic: we ought to follow reason.

To begin at the beginning: what is rationality? As with most words in common usage, no definition can stipulate its meaning exactly, and the dictionary just leads us in a circle: most define rational as “having reason,” but reason itself comes from the Latin ration-, often defined as “reason.”

A definition that is more or less faithful to the way the word is used is “the ability to use knowledge to attain goals.” Knowledge in turn is standardly defined as “justified true belief.” We would not credit someone with being rational if they acted on beliefs that were known to be false, such as looking for their keys in a place they knew the keys could not be, or if those beliefs could not be justified—if they came, say, from a drug-induced vision or a hallucinated voice rather than observation of the world or inference from some other true belief.

. . . With this definition the case for rationality seems all too obvious: do you want things or don’t you? If you do, rationality is what allows you to get them.

Steve also makes the case that even people who are irrational, like anti-vaxers with no good reasons or conspiracy theorists, are not always irrational (see interview below). The same is true of postmodernists who deny the existence of any real “truth” that isn’t just a narrative designed to buttress power.

And ultimately even relativists who deny the possibility of objective truth and insist that all claims are merely the narratives of a culture lack the courage of their convictions. The cultural anthropologists or literary scholars who avow that the truths of science are merely the narratives of one culture will still have their child’s infection treated with antibiotics prescribed by a physician rather than a healing song performed by a shaman. And though relativism is often adorned with a moral halo, the moral convictions of relativists depend on a commitment to objective truth. Was slavery a myth? Was the Holocaust just one of many possible narratives? Is climate change a social construction? Or are the suffering and danger that define these events really real—claims that we know are true because of logic and evidence and objective scholarship? Now relativists stop being so relative.

There’s a lot more to digest in the piece, so I’ll give just one more bit, where, clearly mindful of the Zeitgeist, he relates reason to social justice and takes a lick at universities that, by trying to suppress free speech, are at the same time denigrating reason, the basis for persuasive speech. These words follow directly after the paragraph above. The bolding is mine:

For the same reason there can be no tradeoff between rationality and social justice or any other moral or political cause. The quest for social justice begins with the belief that certain groups are oppressed and others privileged. These are factual claims and may be mistaken (as advocates of social justice themselves insist in response to the claim that it’s straight white men who are oppressed). We affirm these beliefs because reason and evidence suggest they are true. And the quest in turn is guided by the belief that certain measures are necessary to rectify those injustices. Is leveling the playing field enough? Or have past injustices left some groups at a disadvantage that can only be set right by compensatory policies? Would particular measures merely be feel-good signaling that leaves the oppressed groups no better off? Would they make matters worse? Advocates of social justice need to know the answers to these questions, and reason is the only way we can know anything about anything.

Admittedly, the peculiar nature of the argument for reason always leaves open a loophole. In introducing the case for reason, I wrote, “As long as people are arguing and persuading…,” but that’s a big “as long as.” Rationality rejecters can refuse to play the game. They can say, “I don’t have to justify my beliefs to you. Your demands for arguments and evidence show that you are part of the problem.” Instead of feeling any need to persuade, people who are certain they are correct can impose their beliefs by force. In theocracies and autocracies, authorities censor, imprison, exile, or burn those with the wrong opinions. In democracies the force is less brutish, but people still find means to impose a belief rather than argue for it. Modern universities—oddly enough, given that their mission is to evaluate ideas—have been at the forefront of finding ways to suppress opinions, including disinviting and drowning out speakers, removing controversial teachers from the classroom, revoking offers of jobs and support, expunging contentious articles from archives, and classifying differences of opinion as punishable harassment and discrimination. They respond as Ring Lardner recalled his father doing when the writer was a boy: “‘Shut up,’ he explained.”

I’ll be reading it soon (I get a free copy as a sort of “books for boots” reciprocity).  If the words above intrigue you, I think you’ll want to read Rationality too, even if you dislike Pinker. The prose alone is worth the price.

Second, there’s an interview with Steve at Smashing Interviews Magazine (click on screenshot): 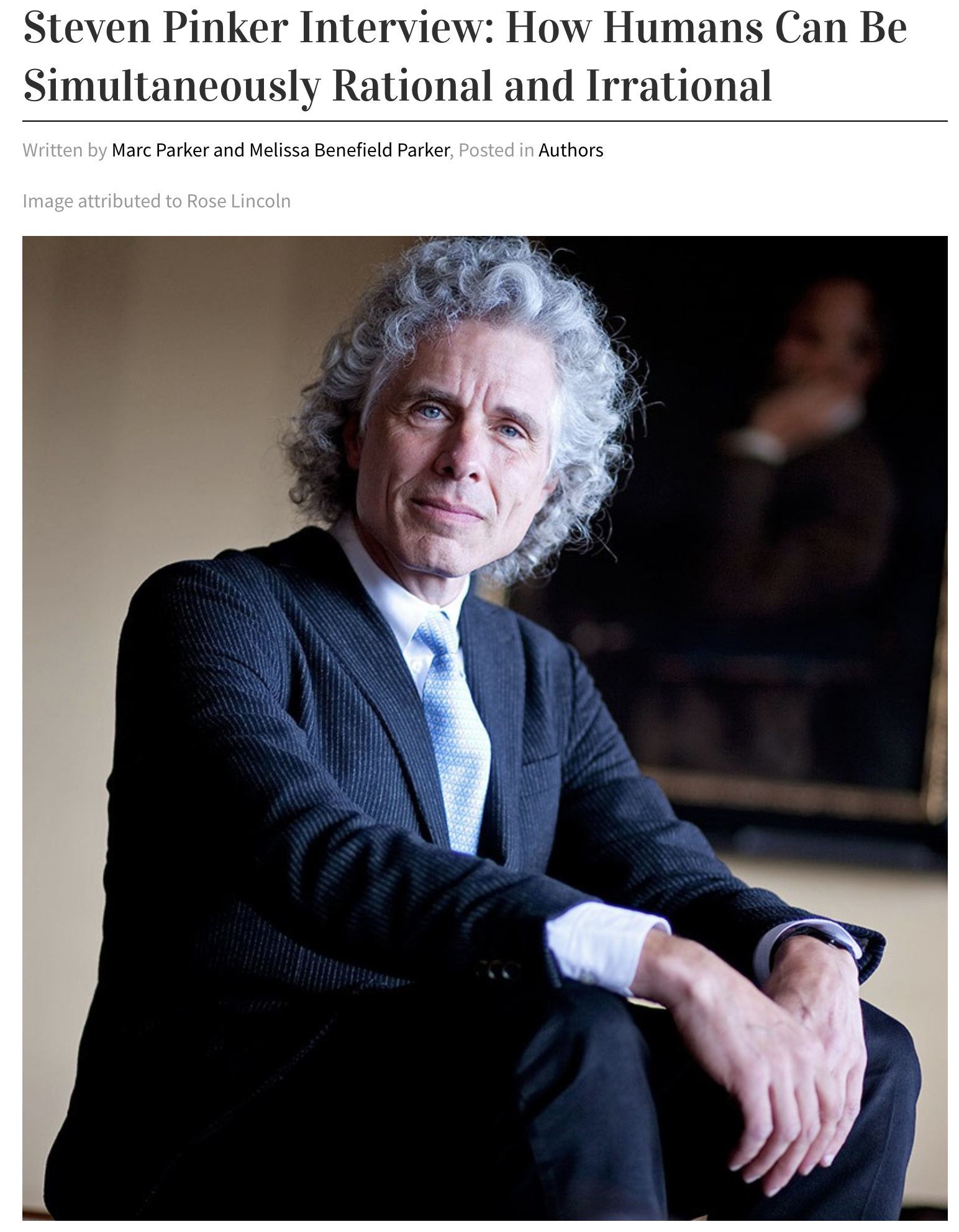 This deals with the topic broached in the title, and has a few provocative quotes. I’ll give just two. Here he’s talking about tribalism as an impediment to reason:

Smashing Interviews Magazine: Leaders of these “sides” are influencers as well. Doesn’t that compound the problem?

Steven Pinker: It does indeed. Whether the subject is vaccines or treatments or climate change, spokespeople should be chosen that are trusted by different political constituencies. So the best way of getting people to appreciate climate change is not to parade a bunch of leftists or Democratic Party spokespeople out there to tell people why they should act on climate change but find people who are libertarians or from the right.

Likewise, the best thing that could’ve happened for vaccines would have been if the press said, “Yeah. Donald Trump helped get vaccines developed and circulated quickly. So let’s give him credit for that, and everyone can take the Trump vaccine.” A lot of them would’ve rather died than said that, but it may have been more effective in getting the political right to be on board with the vaccines since so much is driven by tribalism.

and, related to that:

Smashing Interviews Magazine: In the book, you said, “We should care about people’s virtues when considering them as friends but not when considering the ideas they voice.” So we should try and separate the idiotic ideas from our friend who has high moral standards? I’m wondering how to do that (laughs).

Steven Pinker: (laughs) With friends, we’ve got to sometimes tell white lies and polite hypocrisies. But when it comes to evaluating public figures, what’s the best way to run a democracy, what’s scientifically true or false, then, yeah, we’ve got to forget who’s a nice guy and who’s a scoundrel and evaluate if what they’re saying is true or false, beneficial or harmful.

Here’s an obvious example. Thomas Jefferson was, in many ways, a despicable human being. On the other hand, he had some great ideas such as democracy. Conversely, an even more extreme example is that scientists who discovered smoking was harmful and could cause cancer were the Nazi scientists. For years, the tobacco companies said, “Oh, you can’t believe that smoking causes cancer. That’s Nazi science. Are you going to believe what the Nazis say?” Now, that was convenient for the tobacco companies, but it’s irrelevant to the question of whether smoking really does cause cancer. We did make a big mistake by discounting scientific facts because of where they came from. There is something called genetic fallacy that has nothing to do with genes or DNA. It’s an old term referring to the genesis or origin of an idea, how it was generated.

This reminds me of some readers who won’t read a post I write if the source is from the Right, and tend to discount everything from such a source.

At the end of this interview is a long disquisition by Pinker on what he thinks we need to do to “bring more people over to the rational side.”  I’ll let you read that for yourselves. Enjoy; I’m going over to get my booster shot!