The Guardian has one of its “long reads” on Steve Pinker, and it’s pretty absorbing. For one thing, if you’re interested in what Steve’s life is like, especially in his Cape Cod home where he’s spent most of the pandemic, it’s quite enlightening. I learned a lot of stuff I didn’t know about him (I’ll put a few excerpts below).

Second, it’s a summary of reactions to his work (it also gives a precis of his new book, Rationality) and it’s not fawning. In fact, it’s rather critical, painting him as almost a servant of capitalism, a man determined to maintain the status quo while ignoring crises like global warming. I also detect criticism of his materialism and implied self-regard, but I may be overly sensitive since he’s a friend.

While I know know that some of the criticisms are misguided (like the grossly misleading letter people wrote trying to get him demoted at the Linguistic Society of America), others I can’t adjudicate, like claims that he distorts data in some of the graphs in his latest books. At any rate, in a piece he wrote for Quillette, Steve defended himself against many of the criticisms of his book Enlightenment Now.  You’ll be familiar with many of the these criticisms, but the readers of the Guardian probably weren’t. I’d be curious to see whether readers think that, overall, it paints a positive picture of Steve, a negative one, or a mixed one.

Click on the screenshot to read it for free: 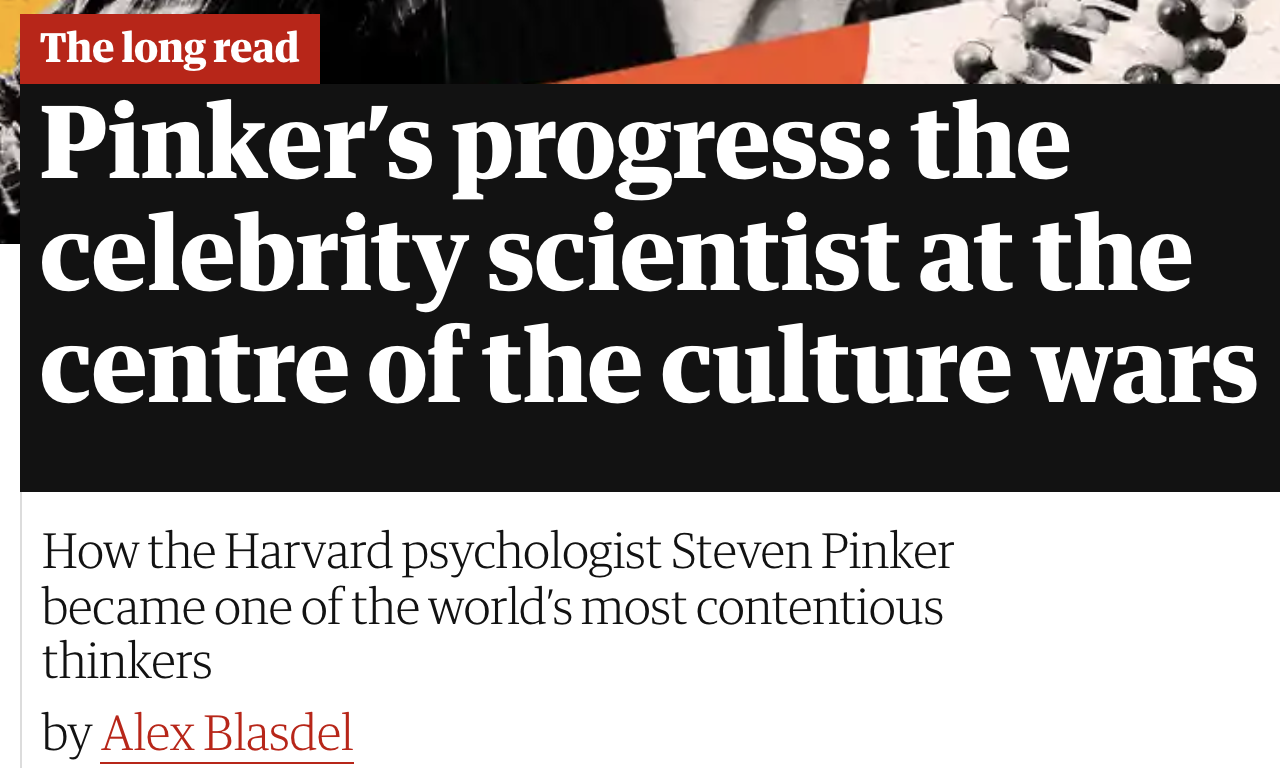 A quote on his increasing propensity to do intellectual combat:

Since Enlightenment Now came out, in early 2018, Pinker has been engaged in almost unceasing conflict with what he considers his many intellectual enemies, who include intellectuals (“intellectuals hate progress”), progressives (“intellectuals who call themselves ‘progressive’ really hate progress”), and universities full of progressive intellectuals (a “suffocating leftwing monoculture”). He has also taken aim at postmodernism (“defiant obscurantism, dogmatic relativism, and suffocating political correctness”), a stretch of the green movement running all the way from Al Gore to the Unabomber (“quasi-religious ideology … laced with misanthropy”), contemporary identity politics (“an enemy of reason and Enlightenment values”), and the many people who “lack the conceptual tools to ascertain whether progress has taken place or not”. In these conflicts, Pinker sometimes presents himself as the lone contrarian in a sea of irrationality. He has written in the past that arguments that are “completely reasonable to me, yet blazingly controversial to everyone else” are “the story of my life”.

And a few personal things. It’s clear that he’s made a lot of dosh from his books, though I think writer Alex Blasdel is deliberately pointing to his perks as a flaw:

This summer, I flew to Provincetown, on Cape Cod’s northern tip, to observe up close the intellectual habits of a man considered by some to be one of the most influential thinkers of our time. I arrived on a warm morning at the start of tourist season, and when Pinker picked me up he had the top down on his Volvo convertible. Provincetown has long been a summer resort, especially for LGBTQ people; it is the sort of liberal idyll – commerce meets individual rights meets cappuccinos – that Pinker extols. Fourth of July celebrations had ended the previous day, and the clothing boutiques and cafes along the main drag were festooned with American flags and pride banners. Men in thongs with tanned pectorals cycled by the waterfront.

His widespread interests. You should look up his photography page. I was chuffed to hear about his love of “The Last Waltz”, which is my favorite rock-concert movie and one of my favorite documentary movies:

Pinker recognises the dangers of being trapped within the comfortable perspective of such a comfortable world. The antidote, he says, is an empirical mindset. In Rationality, he notes that in 2019, following the first shark fatality in Massachusetts in 80 years, towns up and down the Cape invested in expensive shark warning and control measures, even though car crashes kill 15 to 20 people there every year, and “cheap improvements in signage, barriers and traffic law enforcement could save many more lives at a fraction of the cost”. That actuarial approach to human life has caused some to think he is bloodless, which he is not. He loves classic rock, says his favourite genre of movie is the concert film or rock documentary, and has watched The Last Waltz, about the largely Canadian band the Band, at least a dozen times. He is a keen landscape and wildlife photographer. “He just takes an infinite delight in the world as it presents itself,” his mother, Roslyn, told me.

His penchant for food. I’ve never eaten at Peter Luger’s which has a huge (though declining) reputation for ribeye steak. I approve of his food choice, though I’d have wine rather than beer, and fie on the San Pellegrino water:

When we stopped to order sandwiches at a deli in the small town of Truro, he brought up a study from the 80s that identified two species of vegetarian – those who eschew meat for moral reasons, and those who do it for health. Pinker, who ordered a smoked turkey sandwich with muenster cheese, described himself as a “reducetarian” and reckons that, morally speaking, he probably shouldn’t eat meat. (If he could choose his final meal, he told the aspiring jet-setter’s magazine Monocle, it would be a rib steak, beer and bottle of San Pellegrino at the Brooklyn steakhouse Peter Luger.)

His bike (and sense of humor):

Having toured the house, Pinker and I suited up for a bike ride. “I like to go fast,” he told me. He rides a several-thousand-dollar carbon frame, which he bought secondhand on eBay. For many years, he used to check the weight of everything that went on his bike, including his water bottle. “It was truly obsessive compulsive, because we know that, when it comes to speed, aerodynamics are a far bigger factor than weight,” he said. Before the advent of GPS tracking apps, he used to measure his routes out on a map and record his rides in a journal. He still weighs himself every morning.

“We’re a pair of Mamils,” Pinker joked as we cycled out of his garage. “Middle-aged men in Lycra.”

And his boots and fancy loafers—a bit I couldn’t leave out because I put him together with Lee Miller, who made my own custom boots:

Pinker and I had planned to go up to Harvard to see his office, which he hadn’t entered since the start of the pandemic, nearly a year and a half earlier. Before we left, I asked to see a pair of black caiman-leather cowboy boots he had custom made for him by the legendary bootmaker Lee Miller, part of his signature look at public events. (“He told me he likes cowboy boots because it’s the only way a man can get away with wearing high heels,” Pinker’s friend the biologist Jerry Coyne told me. “He likes mostly reptile boots, I think.”) Pinker showed me the boots, but opted to wear a pair of driving loafers designed by Nicolas Sarkozy’s son Louis, for whom Pinker is a celebrity model.

I’ve left out a lot of stuff out about his ideas and the criticism he’s received, as Steve is capable of dealing with that himself. I suppose I’ve highlighted the “People Magazine” aspects of his life because I didn’t know about them, and it’s no secret that I greatly admire him—he’s perhaps the smartest public intellectual I’ve ever met (my meeting with Hitchens doesn’t count because it lasted about five minutes). But whether you want info about his work, his life, or both, I do recommend the piece.  I’m also a bit nosy about what it’s like to be a famous public intellectual, and both the perks and flak you get.

A young Pinker; his trademark hair had already gone gray when I first met him:

63 thoughts on “A long read on Pinker”