I know there are those who dismiss everything written on Quillette as “alt-right”, and won’t read it, but if you’re one of them, you’re doing yourself no favors. The site is not “alt right,” though it sometimes defends conservative positions. But it also criticizes fulminating wokeness and says things that are correct but taboo to say for “progressive liberals.” And it has some good articles. I glance at it about every ten days, though I don’t often highlight it.

This week they’ve made a list of the “best on campus crises,” many of which you’ve read about here. I’ll just list the crises and give the links,  which go to the relevant Quillette description, but you may want to weigh in below about which “crisis” is the most egregious. Click on the screenshot below to read the piece.  I will make a few comments, and those will be flush left. 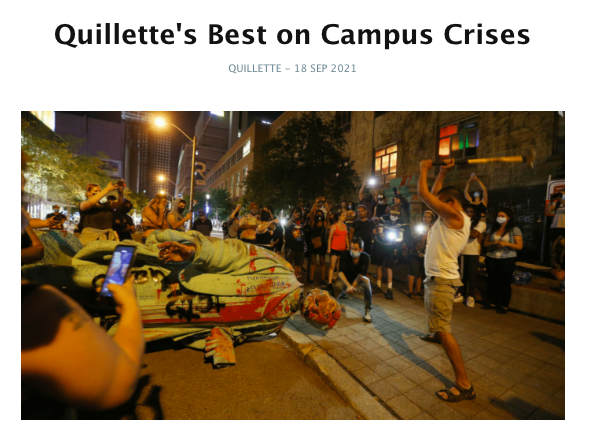 This describes her cancellation while trying to give a speech at UCLA.

Smith College was accused of racism after the police accosted a black student/worker resting in a closed-off lounge (they didn’t know she was black when they were called). Smith’s own investigation showed that no racism was involved, but Smith refuses to admit this repugnant conclusion. Kay also talks about the well known situation of Oberlin College versus Gibson’s Bakery (see below).

Smith is where employee Jodi Shaw resigned after her run-in with the authorities that wanted participate in what seems like a “struggle session.”

Here’s another case where a college refused to admit it did wrong, and its refusal cost Oberlin $25 million, which, as far as I know, it still hasn’t paid to Gibson’s Bakery.

A police shooting in nearby Philadelphia caused a student strike, a campus meltdown, and the caving-in to student demands by one of the most cowardly administrations I’ve ever seen.

I wasn’t familiar with this case, which took place at Brock University in Ontario. This is a mess, involving “indigenization and colonization” efforts, Vice-Provost for Indigenous Engagement Robyn Bourgeois, criticism of her statements, and her attempts to suppress that criticism while portraying herself as a victim.

Haverford is loosely affiliated with Bryn Mawr, and, like Bryn Mawr above, the school melted down after the police shooting in Philly. And Haverford’s President Wendy Raymond not only gave in to some ludicrous student demands, but abased herself with some self-flagellating statements.

A professor was caught on video bemoaning the low performance of black students in her class, which the students and many faculty chose to interpret as a racist statement rather than a statement of frustration about the performance differential between races. (We don’t know what was in the professor’s mind.) The professor, an adjunct, was forced to resign.

The author, Abu-Odeh, is a professor of law at Georgetown, and he follows the incident with a long (and a bit tedious) discussion of the clashes of ideology on campus and throughout the U.S.

A Declaration of Independence by a Princeton Professor | Joshua T. Katz

Katz is a professor of classics at Princeton, and this article, criticizing a faculty letter, was his “declaration of independence.”

A large group of Princeton professors signed a group letter accusing the school of structural racism and demanding more equity. To me, some of their demands for change are reasonable, but this demand for a Star Chamber to police speech, behavior, and even research and publication wasn’t:

Constitute a committee composed entirely of faculty that would oversee the investigation and discipline of racist behaviors, incidents, research, and publication on the part of faculty, following a protocol for grievance and appeal to be spelled out in Rules and Procedures of the Faculty. Guidelines on what counts as racist behavior, incidents, research, and publication will be authored by a faculty committee for incorporation into the same set of rules and procedures.

(There are other demands that seem invidious as well.) The students followed with supporting letters demanding that the Princeton campus police be defunded.

Evergreen State and the Battle for Modernity | Michael Aaron

We all know about the dissolution of dignity and liberal humanism at Evergreen State, the worst case I now of in recent years. The article above was written in 2017, and you can read my many posts on Evergreen State here. It’s too familiar to many of us to go into detail; read the piece if you’re unfamiliar with this odious college.

This describes the “victimhood culture” involved in so many of the incidents above. And remember, don’t think these incidents are limited to campus. We already know they’ve spread widely: into the media, into entertainment, and into politics. As Andrew Sullivan said, “We’re all on campus now.”