The New York Times’s opinion section has started a new series whose purpose is outlined in the article below by By Ezekiel Kweku, the Opinion politics editor.

But America is not young anymore. Whereas it was once spry and excitable, it is now creaky and soft. The country that passed Prohibition and created Social Security now spends decades dithering over how large a role the government should play in health care. The country that went to the moon shrinks at the challenges presented by climate change. Its bold and expansive political imagination has atrophied.

There are, of course, reasons for this settling. As the historian Daniel Immerwahr argues in a guest essay, hard partisanship makes it difficult to create coalitions for sweeping changes. Wars, which once smashed through gridlock, no longer lead to collective action.

Not all of the big changes were completely — or even ambiguously — good. The economic boom of the industrial age was fueled by the blood and sweat of exploited workers; the country’s westward expansion came at the expense of Native Americans. But America in its youth was a country confident and unafraid to confront the future. What if it could recover that spirit of invention and restlessness, the risk-taking that formed this country? What would it change? What could it be?

This is the idea behind Snap Out of It, America!, a new series from Times Opinion. It will present not a single, cohesive vision but an array of ambitious ideas from across the ideological spectrum to revitalize and renew the American experiment.

The series will come out every Wednesday, but I’m not going to be paying a lot of attention. Click on the screenshot to read Kewku’s whole article

Now the fun part: a quiz! Yesterday, as part of this series, the Times decided to revitalize America by imagining not two but six political parties falling on a two-dimensional plot of social conservatism and economic conservatism. There’s a brief intro of the seemingly thin rationale at the screenshot below:

America’s two-party system is broken. Democrats and Republicans are locked in an increasingly destructive partisan struggle that has produced gridlock and stagnation on too many critical issues — most urgently, the pandemic and climate change.

There is no reasonable or timely way to fix this broken system. But there is an alternative: more parties.

It is not so hard to imagine a six-party system — and it would not even require a constitutional amendment.

The description of how to get to such a system is below. But first, whether you are a Democrat, Republican or Independent (or other), in the 20-question quiz below, you can discover which new party would be the best fit for you.

Now that’s gonna work. We’ll have the Christian Conservative Party, the Patriot Party, the American Labor Party, the Growth and Opportunity Party, the New Liberal Party, and the Progressive Party.

Which one would you belong to given your social and political views. Click on the screenshot below to take the 20-question quiz. At the end it will slot you into one of the six parties and tell you a bit about it. If you want to skip the quiz and read about these imagined parties, just go here. 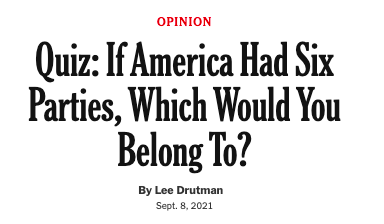 Here’s the first of 20 questions; many of them are about race: 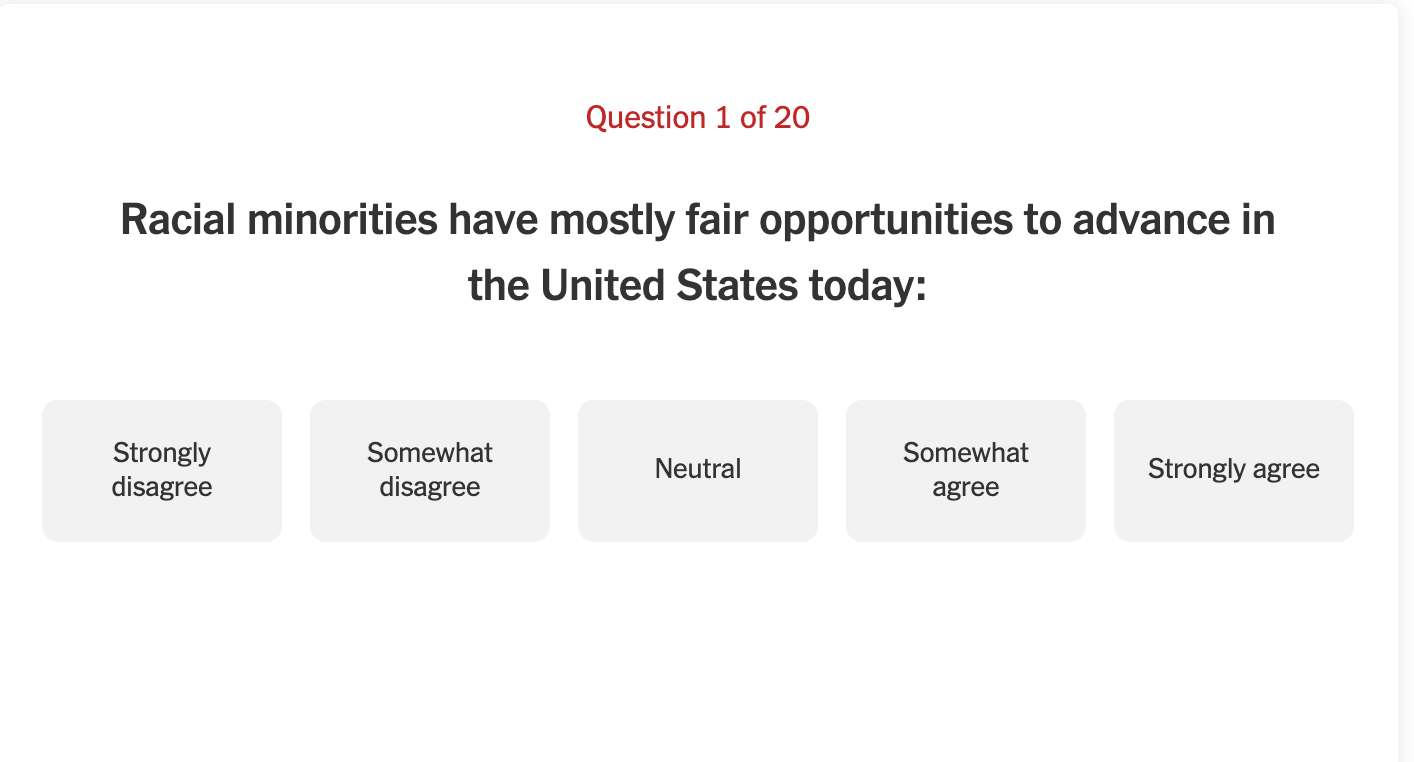 I took the quiz twice independently several hours apart, and both times fell into the same party. (I didn’t remember my answers to the first round.) 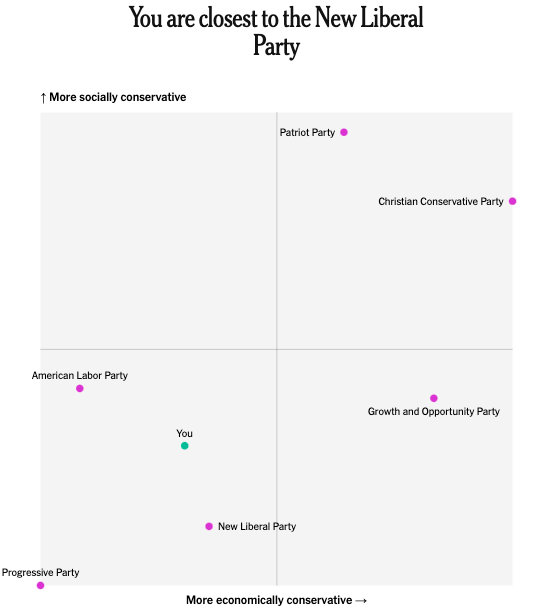 This is a description of that party:

The New Liberal Party is the professional-class establishment wing of the Democratic Party. Members are cosmopolitan in their social and racial views but more pro-business and more likely to see the wealthy as innovators.

Its potential leaders include Pete Buttigieg, Cory Booker, Eric Garcetti and Beto O’Rourke. Based on data from the Democracy Fund’s VOTER survey, this party would be the best fit for about 26 percent of the electorate.

I guess I can’t be unhappy with that, as I’m on the liberal side of both economics and social attitudes. Still, I don’t know what this means, what I’m supposed to do about it, or how I can use my slot to revitalize America.

Of course you’ll want to know where you fall, too, so comment below and we’ll put a quiz here showing where readers fall.

100 thoughts on “Take this quiz: Which of six new political parties do you belong to?”