Please send in your wildlife/travel/street photos, with today’s posting, we have about three days’ worth of photos left. I am seriously concerned, as this feature will die if readers don’t contribute.

Today’s photos come from Jim McCormac, whose blog is here and whose “massive photo website” is here. His captions are indented, and you can enlarge the photos by clicking on them.

I made a trip to a western Ohio fish hatchery (St. Marys Fish Hatchery) back on September 1, with the express goal of finding shorebirds. We scored some action, and a few highlights follow.
Hatchery staff obviously have fish production as their major goal, but as part of operations they routinely draw down impoundments. When draw-downs coincide with shorebird migration, birding can excel. The staff is birder-friendly, just stay out of the way of hatchery activities.

Several ponds have been recently lowered, including one of the large ones, and shorebirding has been interesting of late and should remain so for a while. 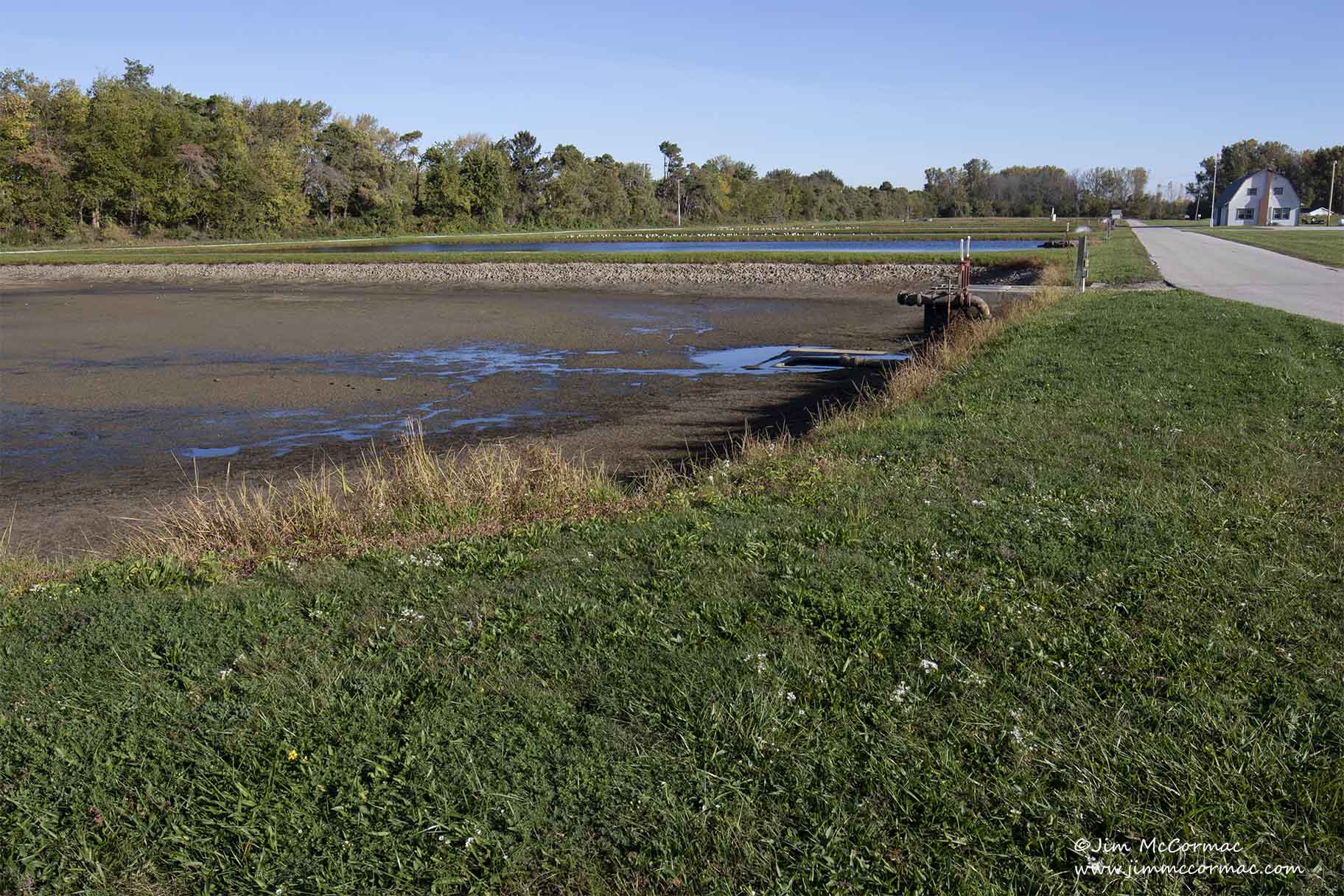 A beautiful little Semipalmated Plover (Charadrius semipalmatus) in its favored milieu, a rich mucky mudflat. Several of these elfin “killdeerlets” with the single band were present. Like most of the shorebirds – plovers and sandpipers – that appear in Ohio during migration, this species nests FAR to our north, across the upper reaches of the Canadian and Alaskan tundra regions. Like most of our plovers, Semipalmated Plovers winter mostly along coastal zones: Atlantic, Pacific, and Gulf coasts, and coastal zones of much of Central and South America, as well as throughout the Caribbean. 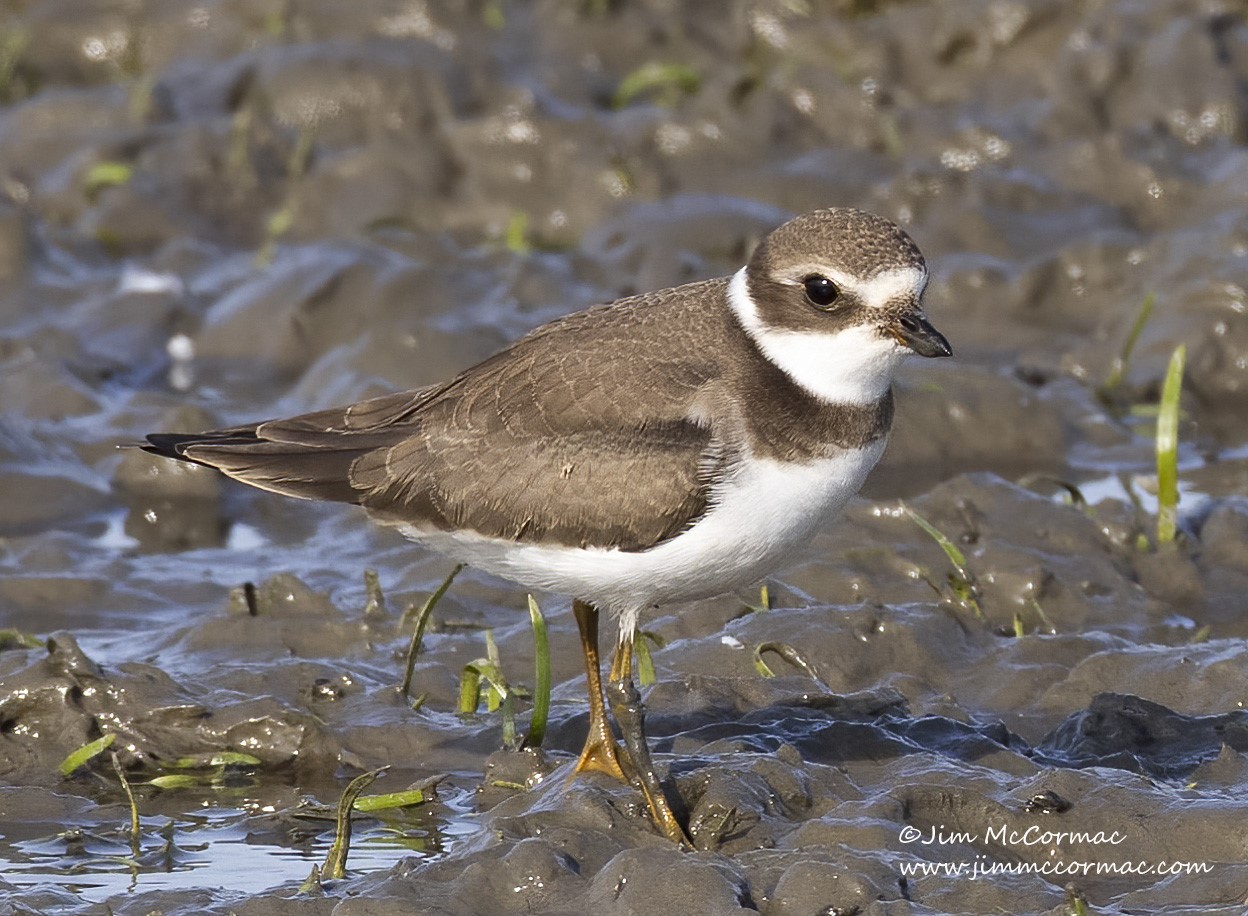 A quartet of Lesser Yellowlegs (Tringa flavipes) rests on a mat of desiccated Chara algae. This was the most common shorebird on this day – perhaps 150 yellowlegs were present. Only perhaps five of their rank were the much larger Greater Yellowlegs (T. melanoleuca), but they generally are greatly outnumbered by their lesser brethren. 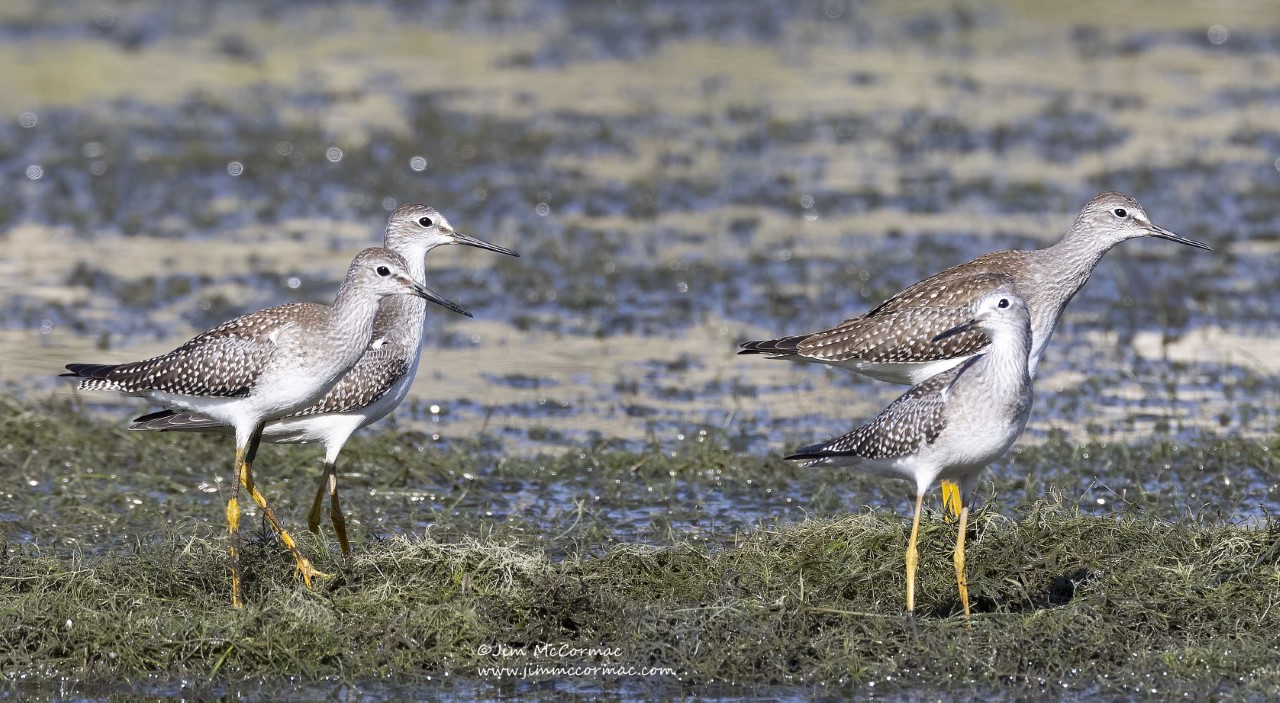 A Lesser Yellowlegs shows off its namesake legs. In the olden days of unregulated market hunting (late 1800’s, primarily), this species along with many other shorebirds was shot in large numbers. The Lesser Yellowlegs recovered well following establishment of wildlife conservation laws, but not all shorebirds did. The Eskimo Curlew, which may be extinct although there are glimmers of hope, is a sad case in point. 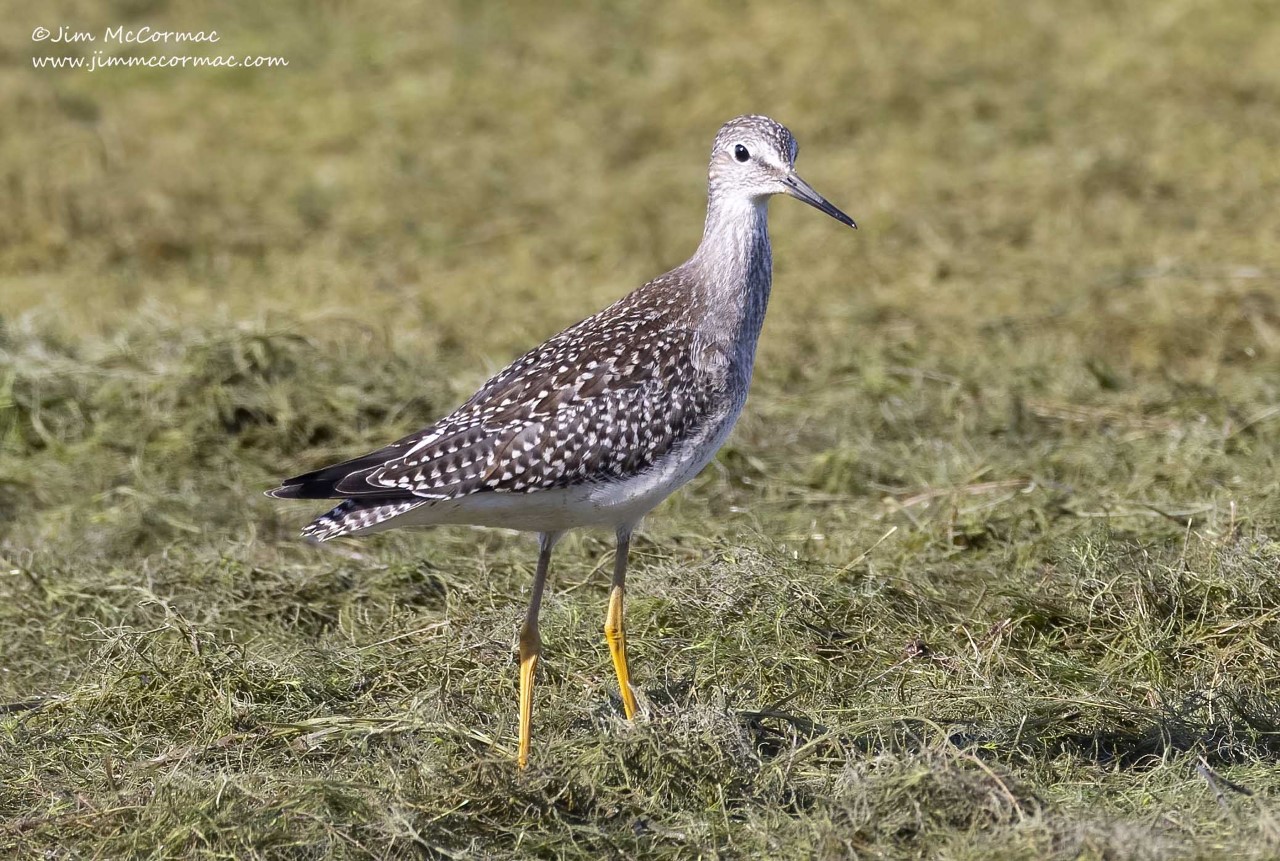 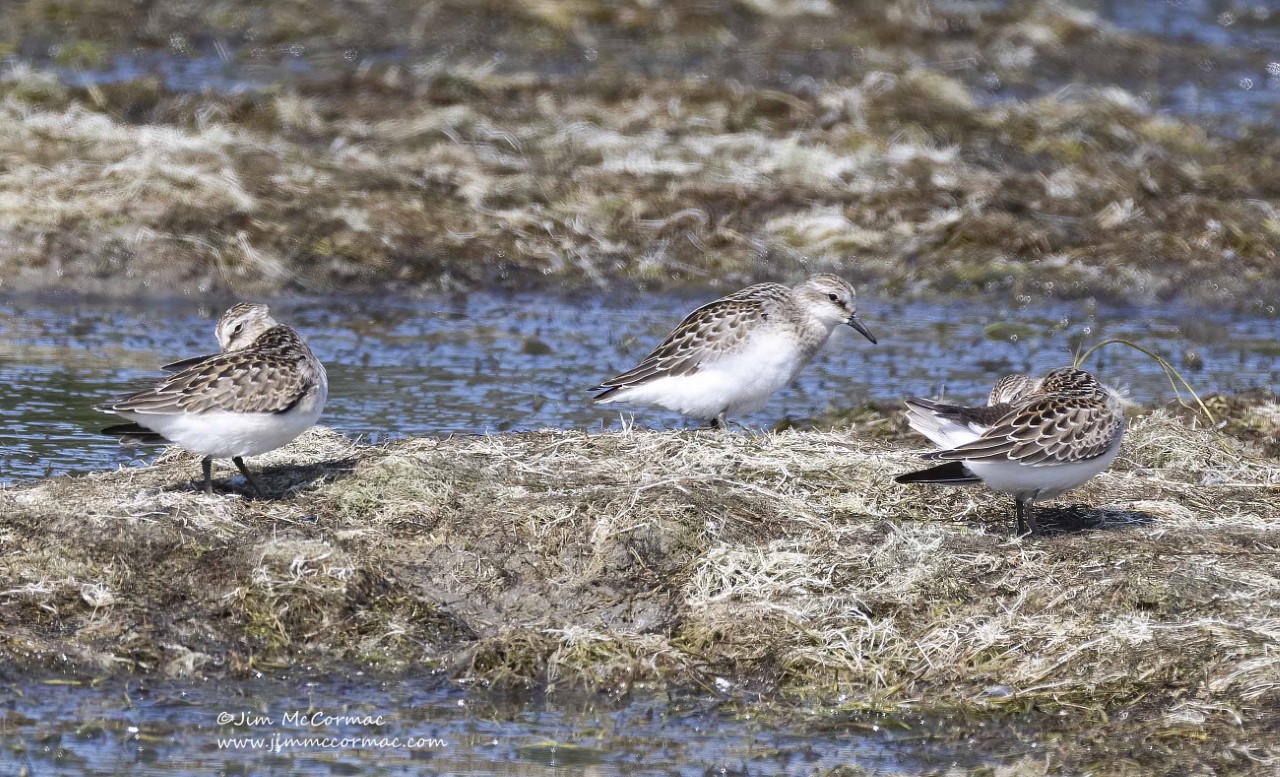 I was especially pleased to encounter two Baird’s Sandpipers (Calidris bairdii). This is one of our larger peeps, although we’re not talking eagle-sized here. A hefty Baird’s stretches the tape to about 7.5 inches in length and weighs little more than an ounce. But those wings! They span a whopping foot and half! You can see how the wingtips project beyond the tail in the photo. This is a bird meant to fly, and fly they do. Baird’s Sandpiper is one of the world’s great long-haul migrants. They breed in the northernmost reaches of the North American tundra. This incredible sandpiper winters along the Andes in Ecuador, all the way south to the southern tip of the world: Tierra del Fuego, Argentina. Some of these animals probably fly 9,000 miles – one way! – between breeding and wintering grounds. Rich mudflats where they can rest and refuel along this long journey are vital, but mudflat conservation for shorebirds seems to get little conservation attention in this region.

The Baird’s Sandpiper is named for one of North America’s great scientists and educators, Spencer Fullerton Baird. He was instrumental in the establishment of the Smithsonian Institution, and was widely regarded as one of the country’s leading naturalists. He richly deserves having this bird named in his honor, as well as the Baird’s Sparrow and at least 14 other animal species. 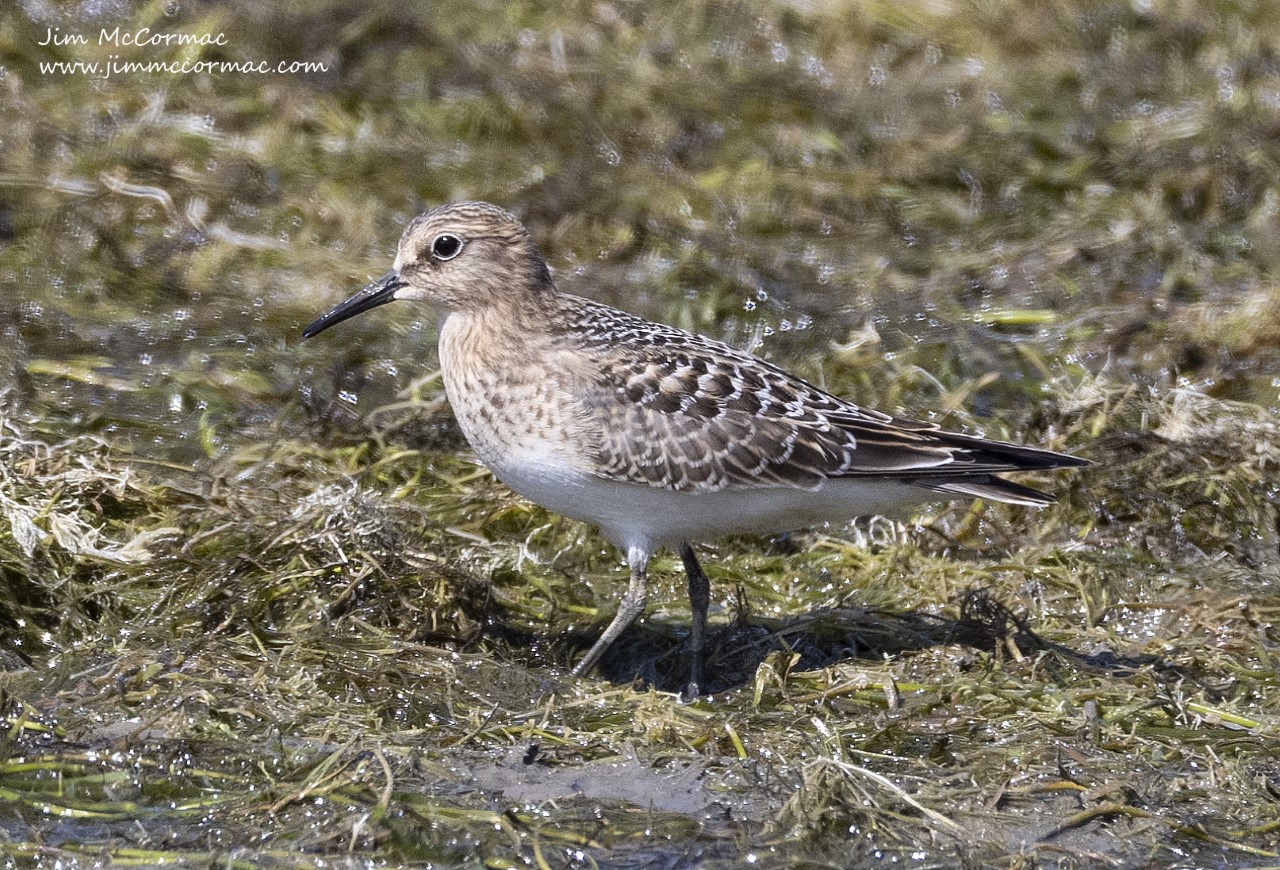 Finally, a Wilson’s Snipe (Gallinago delicata) strikes a pose. This one was foraging out on the open mudflats; normally they are more reclusive and lurk in vegetation. And thus are easily overlooked. Birds in the dozens or even triple figures sometimes haunt wet meadows in migration, but remain largely out of view. Snipe come out of their shells on breeding grounds, where they engage in fantastic aerial courtship flights accompanied by a surreal winnowing sound produced by their tail feathers. Many people are surprised to learn that there really is a real bird called a snipe, especially those duped into “snipe hunting” as a youth. 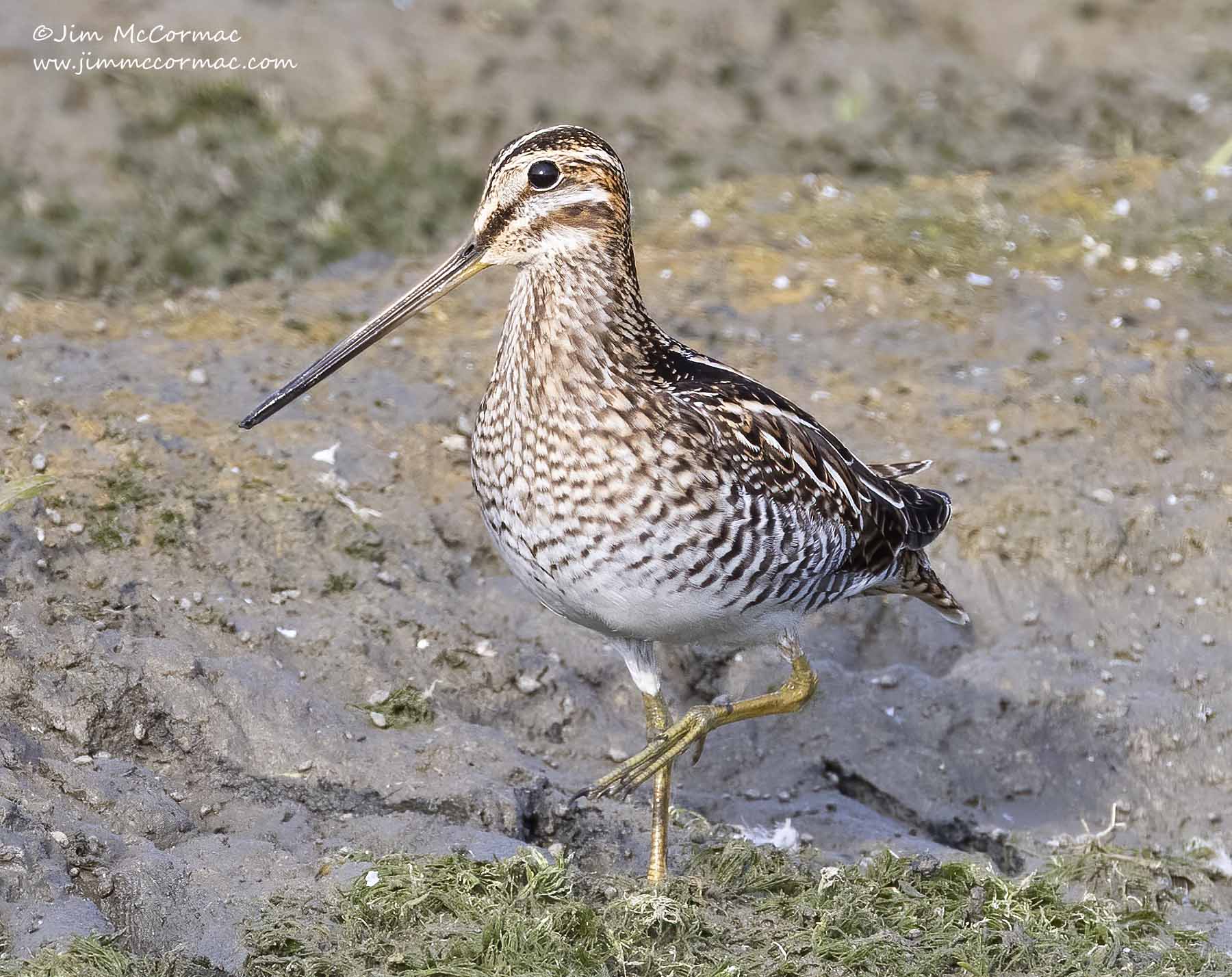