It’s been a long time (over a year) since we’ve examined the oeuvre of Elaine Ecklund a sociologist at Rice University—and now “director of the Religion and Public Life Program in Rice’s Social Sciences Research Institute—who used to be the subject of many posts.  The reason? Because she made her living as a researcher heavily funded by the Templeton foundations, and apparently dedicated to showing that religion and science are compatible. She was not above twisting or misrepresenting her data to make that point which, besides the tendentious nature of her scholarship, upset many of us, including Jason Rosenhouse and Russell Blackford, who panned her 2019 book Secularity and Science for misrepresenting the very data she published.

For most of the years I’ve written this site, Ecklund has been heavily funded by three foundations started with John Templeton’s mutual-fund fortune. According to her c.v., she’s currently sitting on three grants from the Templeton Religion Trust totaling $ 3,939,548! Sir John Templeton’s ambition, when he founded the John Templeton foundation, was to show that the more we learn about science, the more evidence we have for God.

Well, Ecklund doesn’t talk about her own religious belief, but she’s dedicated her career (and spent a gazillion Templeton dollars) trying to show that scientists aren’t as atheistic as people think they are, and that scientists are “spiritual people,” not meanies like Richard Dawkins. This message, of course, plays right into Templeton’s program, ergo the continual stream of funding she gets from their foundations. And once you’ve gotten your stall in the Templeton Stable, the feed bag has no bottom.

Now Ecklund has a new book, coauthored with David R. Johnson, which promises to be more of the same. I haven’t yet read it, but I’ve read several of her books and papers, and have never failed to be infuriated by them. To get an idea of what it’s about, there’s a summary of the contents in the puff piece issued by Rice University and on Ecklund’s personal website.  The book is called Varieties of Atheism in Science (you can also get it from Oxford University Press). The screenshot below links to the Amazon page. 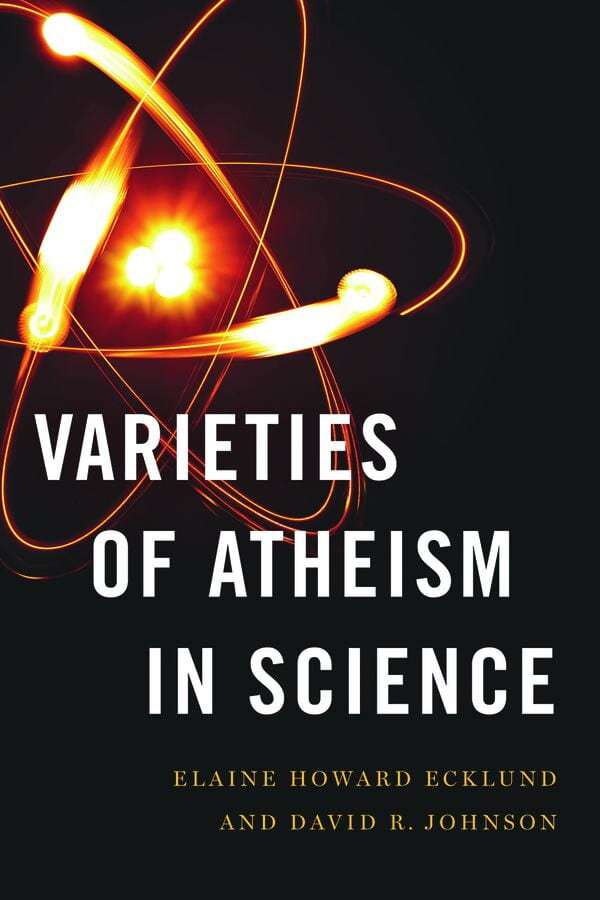 Some of the puffery in a press release from her school, Rice University:

As it turns out, the “New Atheism” embraced by the likes of Richard Dawkins, Sam Harris and other notable scientists is at odds with the beliefs of most scientists who are atheists.

“Atheist scientists and religious communities, for example, certainly disagree about many things, but we found that they have so much more in common than they might think they share,” Ecklund said. “Both groups often have a sense of fascination about the world, a sense of meaning and purpose and a desire to explain something larger than themselves.”

This is completely disingenuous. Science has ways of showing what we think is true about the world, while religion just makes stuff up and its claims about the cosmos are falsified or untestable. The “sense of meaning and purpose” of scientists rests on the desire to find out the truth about the world, or involves secular stuff like their families and hobbies, while that of believers rests on the assumption that a deity confers meaning and purpose upon us. Finally, “something larger than ourselves” means “the universe or the Earth” to scientists, but “God and his plan” to religionists. We also have in common that we eat, breathe, and sometimes like books and music. We should be friends!

But wait! I rant! The puffery goes on:

. . . Ecklund and Johnson argue that improving the public’s perception of scientists requires uncovering the real story of who atheist scientists are.

“As the pandemic continues to ravage the global population, never before has it been more important to improve the relationship between the public and the science community,” Ecklund said.

Of the New Atheists, the book concludes, “It is now our responsibility to replace their rhetoric with reality.”

“Reality” is Ecklund’s construal of the data, which, as we’ve seen repeatedly, doesn’t quite match with what the data themselves say. And I wonder who those 81 interviewed scientists are. They certainly don’t include Richard Dawkins, Sam Harris or me!

The onus for improving the “science-religion relationship” rests not on scientists, who by and large are atheists who ignore religion, but on religionists and their rejection of science. It’s not the scientists who are making the pandemic worse by ignoring data!

Which reminds me, as I continue my rant, of a lovely quote from The Great Agnostic, Robert G. Ingersoll:

“There is no harmony between religion and science. When science was a child, religion sought to strangle it in the cradle. Now that science has attained its youth, and superstition is in its dotage, the trembling, palsied wreck says to the athlete: “Let us be friends.” It reminds me of the bargain the cock wished to make with the horse: “Let us agree not to step on each other’s feet.”

That, in a nutshell, is the academic program of Elaine Ecklund.

Here’s a summary of her new book with Johnson from Ecklund’s personal website:

A significant number of Americans view atheists as immoral elitists, aloof and unconcerned with the common good, and they view science and scientists as responsible. Thanks in large part to the prominence and influence of New Atheists such as Richard Dawkins, Sam Harris, Daniel Dennett, and Sam Hitchens, [JAC: SAM HITCHENS????] New Atheism has claimed the pulpit of secularity in Western society. New Atheists have given voice to marginalized nonreligious individuals and underscored the importance of science in society. They have also advanced a derisive view of religion and forcefully argued that science and religion are intrinsically in conflict.

Many in the public around the globe think that all scientists are atheists and that all atheist scientists are New Atheists, militantly against religion and religious people. But what do everyday atheist scientists actually think about religion? Drawing on a survey of 1,293 atheist scientists in the U.S. and U.K., and 81 in-depth interviews, this book explains the pathways that led to atheism among scientists, the diverse views of religion they hold, their perspectives on the limits to what science can explain, and their views of meaning and morality. The findings reveal a vast gulf between the rhetoric of New Atheism in the public sphere and the reality of atheism in science. The story of the varieties of atheism in science is consequential for both scientific and religious communities and points to tools for dialogue between these seemingly disparate groups.

Given the way Ecklund has vastly overblown her findings in the past, I’d take that second paragraph above with a grain of salt.  For years Ecklund has been calling for productive dialogue between science and religion, and yet what we have, and will always have, is an unproductive monologue, with science telling religion, “Your claims are either unevidenced or disproven.”  Religion has nothing valuable to say to science, though they often repeat the ironic mantra: “Be humble”. Yet it is “humble” to be a believer who not only thinks there’s a divine being, but claims to know its nature?

Will I read the book? I suppose so, but only in the way that I visit the endodontist for a root canal.

26 thoughts on “Elaine Ecklund has a new book, and yes, it’s more of the same accommodationism”