It’s been roughly four years since I wrote about Elaine Ecklund‘s efforts to show that religion and science aren’t in conflict and also that scientists are more religious than one might suspect (see posts here). A sociologist at Rice University, Ecklund has been funded, as far as I can see, nearly continuously by various Templeton grants, as their sub-organizations love her message of harmony between science and faith. And Ecklund’s analyses designed to show that have involved, in my view, a sometimes disingenuous presentation of the data—data that often don’t support her conclusions (read some of my earlier posts to find out how).

In the June issue of Free Inquiry, philosopher Russell Blackford reviews Elaine Ecklund et al.’s new book (screenshot of review and book below). The article is paywalled, but I’ve gotten permission to send Russell’s manuscript in Word, which is apparently nearly identical to what was published, to those who are interested (don’t ask unless you want to read it!): 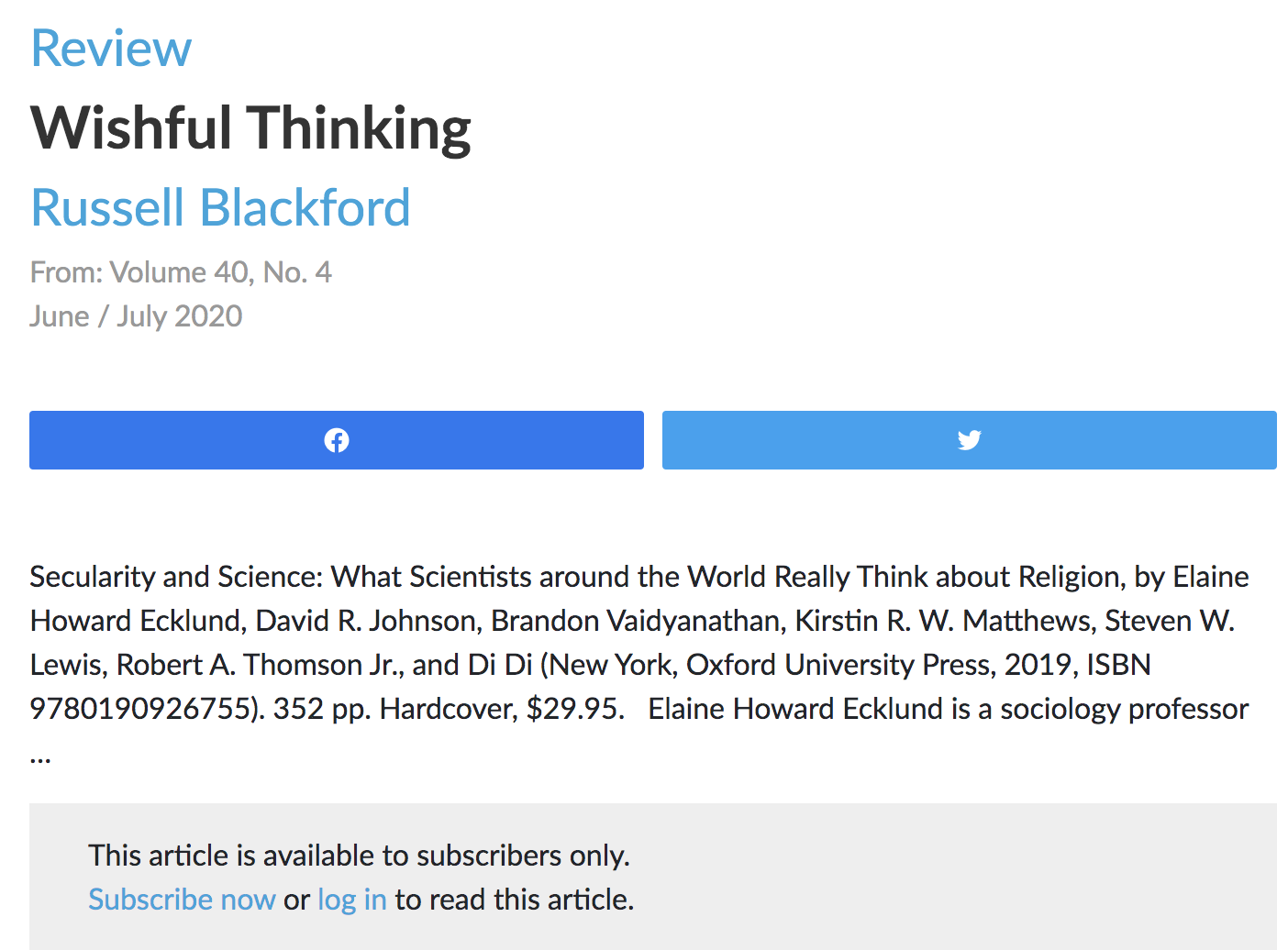 The book, with seven authors (and, as you see, with Ecklund clearly the senior one), came out July 2 and was published by Oxford University Press. Click on the cover below to go to the Amazon site: 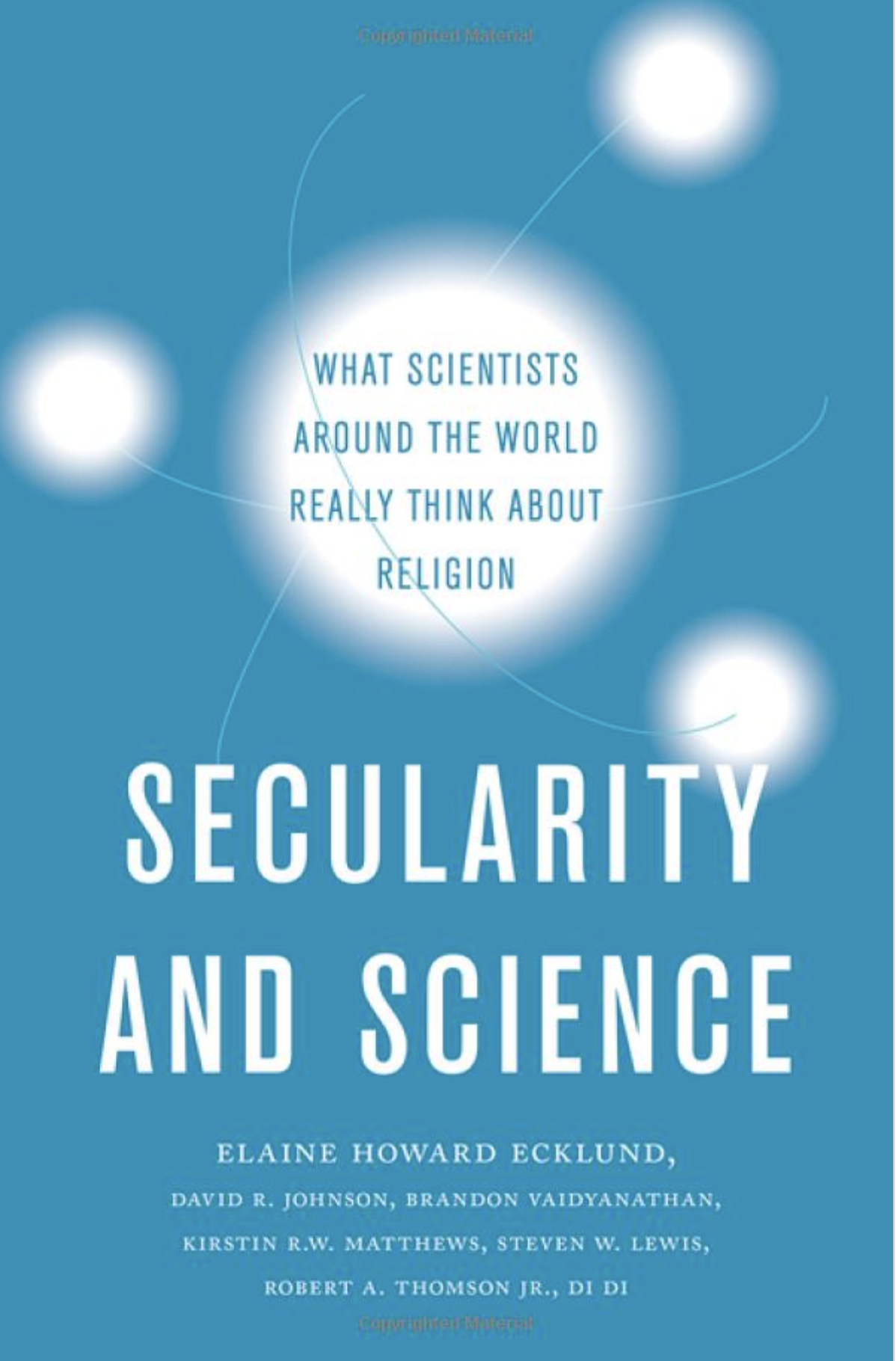 Part of the acknowledgments:

I haven’t yet read it, so you can use Russell’s review as a guide for whether you want to read it yourself. He’s quite critical, but, in the end, doesn’t think the book is completely worthless. After taking it apart for several thousand words, he does add an encomium at the end:

Finally, although I have emphasized what I see as an obvious pro-religious bias – and a certain amount of wishful thinking – throughout Secularity and Science, the large amount of money that went into the book from Templeton’s coffers was not entirely wasted. This book does provide important information for scholars to pore over and consider. Secularity and Science is a resource, among many others, and I’m not sorry to have had the opportunity to read it. I certainly intend to make further use of its extensive information, notes, and bibliography. It just has to be read with a critical mind, and its conclusions should be taken with a grain of salt.

The book interviewed 600 individual scientists in “elite” universities from several countries: the US, the UK (not including Northern Ireland), France, Turkey, Italy, India, Hong Kong, and Taiwan, most of which get their own chapter.

Ecklund’s conclusions, some of which she’s published before in papers (see my earlier posts) are predictable, and Russell summarizes them at the outset:

Secularity and Science offers numerous conclusions about the countries that were studied. With the US, for example, the conclusions are, first, that American scientists are often hostile to religion because of an exaggerated sense of the fundamentalism of the American religious public, and, second, that discrimination against religious scientists undermines American science. But these claims are, to say the least, impressionistic and conjectural. In particular, no worthwhile evidence is presented for the second claim, which would be explosive if it were true. As we’ll see, American scientists are markedly less religious than the general public in the US, and that would have been the most obvious conclusion to report.

The book also offers four overall conclusions, not relating to any particular country:

Little of this is helpful if we hope to deepen our understanding of the relationship between science and religion. . . .

Russell’s three big beefs are these. First, Ecklund’s most important claim is that “there are more religious scientists than we might think”, but “the authors fail to produce any evidence as to what ‘we’ might, or actually do, think.” That conclusion, then, is little more than wishful thinking to soothe accommodationists and Templeton.

The second involves Ecklund’s claim above that “The conflict perspective on science and religion [i.e., that they’re in conflict] is an invention of the West.”  Blackford calls this a sleight of hand with the word “invention because:

Why not call the conflict model a discovery of the West, rather than an invention, since nothing in Secularity and Science demonstrates that the perception of conflict is actually false? Or why not look for a more neutral way of making the point?

For all Ecklund and her collaborators tell us, some degree of conflict, or at least tension, between science and religion might be almost inevitable. This might be a genuine problem for the ongoing viability of religious faiths, even it was first identified in Western countries and has, so far, received little recognition from scientists in Asia.

Russell then goes on to demonstrate, as I did in Faith Versus Fact, that science and religion have different epistemologies and ways of obtaining “knowledge”, that religious methods, in contrast to science’s, haven’t lead to reliably true claims about the universe, and indeed often conflict with scientific claims, and that scientific investigation has continually eroded religious belief and the idea of a supernatural. I would call that a conflict, and I define what I mean by “conflict” at the beginning of my own book.

Finally, despite the claims above, the book demonstrates, as Russell shows clearly, that scientists throughout the world are less religious—often much less religious—then are the citizens of their own countries. There is no discussion of this in the book, nor why the general populations of most of these countries are much less religious than they were, say, a century ago. This is an important question, but of course ignoring it is in keeping with Ecklund’s career-long narrative as well as with Templeton’s agenda of science/religion harmony. To be sure, Russell says that these topics weren’t within the scope of their project.

Perhaps they weren’t, but surely this question should at least have been brought up. There are several reasons why scientists in general might be less religious than the general populace, including the enrichment of science with people who weren’t believers at the outset, as well as the loss of religious faith for those working in science. (I suspect both factors are in play.) But surely, as I mention in Faith Versus Fact, the huge disparity in religiosity between scientists and their lay fellow citizens bespeaks some kind of conflict between religion and science.

I wouldn’t bet that Ecklund will investigate this important question in the future.