I’ve been remiss in following—or even learning about—Noam Chomsky. I’m not much into linguistics, and, truth be told, I couldn’t even recount his big contributions there beyond the concept of Universal Grammar, or how well they’ve stood up over time. I have read several of his political pieces, so I’m aware of his severe criticism of the American government and its actions overseas, and not just under Trump. But in the past few years I haven’t read a word he’s written.

Chomsky is now 91, and when I saw him at a meeting in Puebla, Mexico a few years back, he was frail and needed help walking. But that’s to be expected at his age, and, according to the interview with Anand Giridharadas in The Ink (click on screenshot below), Chomsky is as sharp as ever. According to Wikipedia, he’s now a part-time professor of linguistics at the University of Arizona at Tucson, though of course he spent most of his career at MIT. 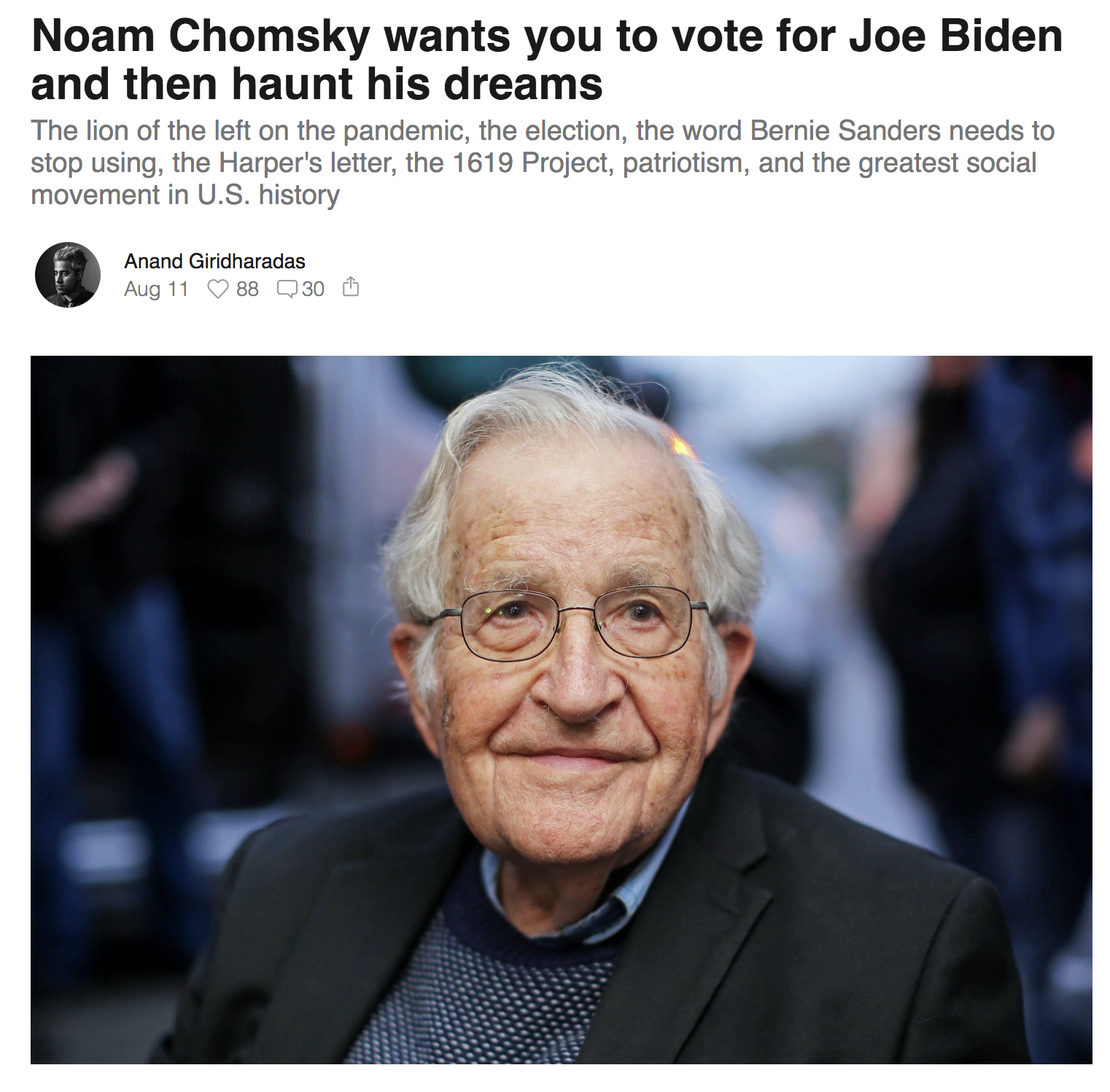 Chomsky’s interview reveals that he favors Biden, but especially because, as he says, Biden has been pushed leftward by Bernie Sanders—the candidate Chomsky really likes (even though he sees Sanders as a faux socialist). When asked if he thought that Alexandria Ocasio-Cortez could ever become President of the U.S. (Ceiling Cat forbid), Chomsky didn’t answer but praised the leftward movement towards progressivism in some segments of the Democratic Party:

Well, if you’d asked me 10 years ago whether someone like Bernie Sanders could be the most popular political figure in the country, I would’ve said you’re out of your mind. But it in fact happened in 2016 and it’s continued to create a significant movement. There are real possibilities. I think if you take a look at the United States in the 1920s, and you asked, Could there ever be a labor movement?, you would’ve sounded crazy. How could there be? It had been crushed.

But it changed. Human life is not predictable. Depends on choices and will, which are unpredictable. So right now, for example, we’re in the process of formation of a Progressive International. It’s based on the Sanders movement in the United States and Yanis Varoufakis’s DiEM25 movement in Europe, which is a transnational European movement seeking to preserve and strengthen what makes sense in the European Union and to overcome its very serious flaws.

. . .Well, actually, the Sanders movement was remarkably successful. And it’s something that has broken with over 100 years of American political history. To bring a candidate to near nomination without any support from the media, from big donors, from the corporate sector. Nothing like that’s happened before. Could it do more? I think so.

Not to make a big fuss about it, but I’ve been mildly critical of Sanders’ presenting himself as a socialist. He’s not a socialist in my opinion. He’s a New Deal Democrat. A mild social democrat. His policies would not have surprised Eisenhower very much. It’s a sign of the shift to the right, of both parties, during the neoliberal period, that his positions are considered revolutionary.

Take the United States. Maybe the greatest social movement to develop in American history, the Black Lives Matter-inspired movement. It’s all over the place. Has the kind of public support that no activist movement ever had. Martin Luther King, at the peak of his popularity, had never reached two-thirds public support for what he was doing. That reflects something.

But I wanted to concentrate on Chomsky’s discussion of the Harper’s Letter decrying “cancel culture” (though it doesn’t use that term), a letter Chomsky signed. When asked about his sense of the letter in view of the controversy it generated, he has a remarkably sensible take, one that the Woke opponents of the letter might be well to ponder:

Well, there’s two different things. There’s the letter and there’s the discussion. The letter is anodyne. It’s a simple statement that it’s worth being careful to preserve freedom of speech. The main attack on freedom of speech was not discussed there. It’s the mainstream establishment, which for years has been engaged in massive cancel culture.

But now segments of the left are picking up part of the same pathology. It’s harmful; they shouldn’t be doing it; it’s wrong in principle. It’s suicidal. It’s a gift to the far right. So here’s a quiet statement saying, “Look, we should be careful about these things and not undertake this.” Should’ve been the end. Then comes the reaction, which is extremely interesting. It proves that the problem was much deeper than was assumed. The reaction is pretty hysterical, mostly totally irrational. Sensible people, personal friends of mine, are writing articles attacking the statement because of the people who signed it. Just think what that means for a second. I’m sure you, like any other person who’s well-known, are deluged with requests to sign statements on human rights issues, civil liberties issues, and so on.

I think by “mainstream cancel culture” he’s referring to the slanting of the news about America by the government and mainstream media, but I can’t be sure. (Readers may want to weigh in.) Nevertheless, his take on Leftist cancel culture is on the money, as is his take on having to be ideologically compatible with everyone who signs a letter that you’ve signed as well.  And surely he’s right—as we know from right-wing sources like Fox News—that the Right makes hay of divisions in the left, particularly those, like the kerfuffle over the Harper’s letter, that look inconsequential and petty.