It’s time for the Caturday felidae, and we have three items today plus lagniappe (if you’ve been good).  These are all videos, so the print-averse will be pleased:

First, seven minutes of people on television, Zoom, Skype, and even a concert—all with cat interruptions. Cats don’t care if you’re on the computer! And in cat-loving Turkey, there are three cats on the summit stage, and one on the catwalk, where it licks its bum and then walks the catwalk, swiping at the models.

This video is somewhat deceptive, as the DNA test of the cats doesn’t appear until 13 minutes in (the rest shows the “evolutionary” relatedness of domestic cat breeds and the three cats of the narrator.

The question is why you want to test your cat’s DNA. If you have a plain moggy, who cares what breed it belongs to? As for health markers, taking your cat to the vet regularly is sufficient to stave off any worries that could come from a DNA test. And if you have a purebred, well, the papers will tell you where it come from.  And I don’t really trust the diagnosis that such pet companies provide.  How many samples did they take to ensure accurate ancestry? The video doesn’t give you a lot of confidence.

If you want a more reliable result, I’d suggest doing your own DNA. BasePaws charges $129 for a standard cat analysis, while 23AndME charges $99 for your own basic human ancestry (another hundred bucks if you want to know what you’re gonna die from).

Catoholic.net (note that this is not a religious site) announces the rare birth of an ocelot kitten (Leopardus pardalis) at the Audubon Zoo (likely to be renamed) in New Orleans. Although the article announces proudly that with the birth “Hope is restored”, in fact ocelots are not endangered. They are considered “species of least concern,” though some populations are decreasing because of habitat destruction. Here’s part of the announcement:

Kylie Linke, a member of the animal care team at the zoo, reported the following about the health of the kitten and his mother:

“The mother and kitten are doing great and he is eating like a champ. Milagre has been very accepting of us weighing him and always is ready to carry him back into the den when we’re done. He’s gone from around 200g at birth to now weighing more than 700g in just three short weeks! We’re already seeing personality and he’s just starting to zoom around on his own.”

Regarding the kitten’s name, Linke said, “He doesn’t have a name yet, but he’s already stolen our hearts!”

Born on May 6 of last year, the kitten has now been named Batata (WTF?), and must be a Cat of Size by now. I still object to keeping large, free-ranging mammals in captivity like this, as the excuses they use—education and conservation—can easily be conveyed by watching videos, and ocelots aren’t endangered. Zoos rarely publish research papers, so what they “learn” about animals biologically is minimal (stop right now and read “The Zoo” by H. L. Mencken). It’s one of his wonderful essays, and I’d love to be able to write like this (without the ethnic slurs):

Education your grandmother! Show me a schoolboy who has ever learned anything valuable or important by watching a mangy old lion snoring away in its cage or a family of monkeys fighting for peanuts. To get any useful instruction out of such a spectacle is palpably impossible; not even a college professor is improved by it. The most it can imaginably impart is that the stripes of a certain sort of tiger run one way and the stripes of another sort some other way, that hyenas and polecats smell worse than Greek ‘bus boys, that the Latin name of the raccoon (who was unheard of by the Romans) is Procyon lotor. For the dissemination of such banal knowledge, absurdly emitted and defectively taken in, the taxpayers of the United States are mulcted in hundreds of thousands of dollars a year. As well make them pay for teaching policemen the theory of least squares, or for instructing roosters in the laying of eggs.

But zoos, it is argued, are of scientific value. They enable learned men to study this or that. Again the facts blast the theory. No scientific discovery of any value whatsoever, even to the animals themselves, has ever come out of a zoo. The zoo scientist is the old woman of zoology, and his alleged wisdom is usually exhibited, not in the groves of actual learning, but in the yellow journals. He is to biology what the late Camille Flammarion was to astronomy, which is to say, its court jester and reductio ad absurdum. When he leaps into public notice with some new pearl of knowledge, it commonly turns out to be no more than the news that Marie Bashkirtseff, the Russian lady walrus, has had her teeth plugged with zinc and is expecting twins. Or that Pishposh, the man-eating alligator, is down with locomotor ataxia. Or that Damon, the grizzly, has just finished his brother Pythias in the tenth round, chewing off his tail, nose and remaining ear.

Science, of course, has its uses for the lower animals. A diligent study of their livers and lights helps to an understanding of the anatomy and physiology, and particularly of the pathology, of man. They are necessary aids in devising and manufacturing many remedial agents, and in testing the virtues of those already devised; out of the mute agonies of a rabbit or a calf may come relief for a baby with diphtheria, or means for an archdeacon to escape the consequences of his youthful follies. Moreover, something valuable is to be got out of a mere study of their habits, instincts and ways of mind — knowledge that, by analogy, may illuminate the parallel doings of the genus homo, and so enable us to comprehend the primitive mental processes of Congressmen, morons and the rev. clergy.

But it must be obvious that none of these studies can be made in a zoo. The zoo animals, to begin with, provide no material for the biologist; he can find out no more about their insides than what he discerns from a safe distance and through the bars. He is not allowed to try his germs and specifics upon them; he is not allowed to vivisect them. If he would find out what goes on in the animal body under this condition or that, he must turn from the inhabitants of the zoo to the customary guinea pigs and street dogs, and buy or steal them for himself. Nor does he get any chance for profitable inquiry when zoo animals die (usually of lack of exercise or ignorant doctoring), for their carcasses are not handed to him for autopsy, but at once stuffed with gypsum and excelsior and placed in some museum.

Least of all do zoos produce any new knowledge about animal behavior. Such knowledge must be got, not from animals penned up and tortured, but from animals in a state of nature. A college professor studying the habits of the giraffe, for example, and confining his observations to specimens in zoos, would inevitably come to the conclusion that the giraffe is a sedentary and melancholy beast, standing immovable for hours at a time and employing an Italian to feed him hay and cabbages. As well proceed to a study of the psychology of a jurisconsult by first immersing him in Sing Sing, or of a juggler by first cutting off his hands. Knowledge so gained is inaccurate and imbecile knowledge. Not even a college professor, if sober, would give it any faith and credit.

I love that last paragraph.

Granted, for rare species zoos have been important in conservation, particularly in breeding animals to restore them to the wild, but this ocelot and its parents are in the zoo for one reason only: entertainment (at the cost of the animals’ boredom) and dosh for the zoo. Like penitentiaries are prisons for humans, zoos are prisons for animals. The benefit of the penitentiary is that they don’t charge people to come and gawk at the inmates.

That said, Batata is a cutie, and here are two videos: 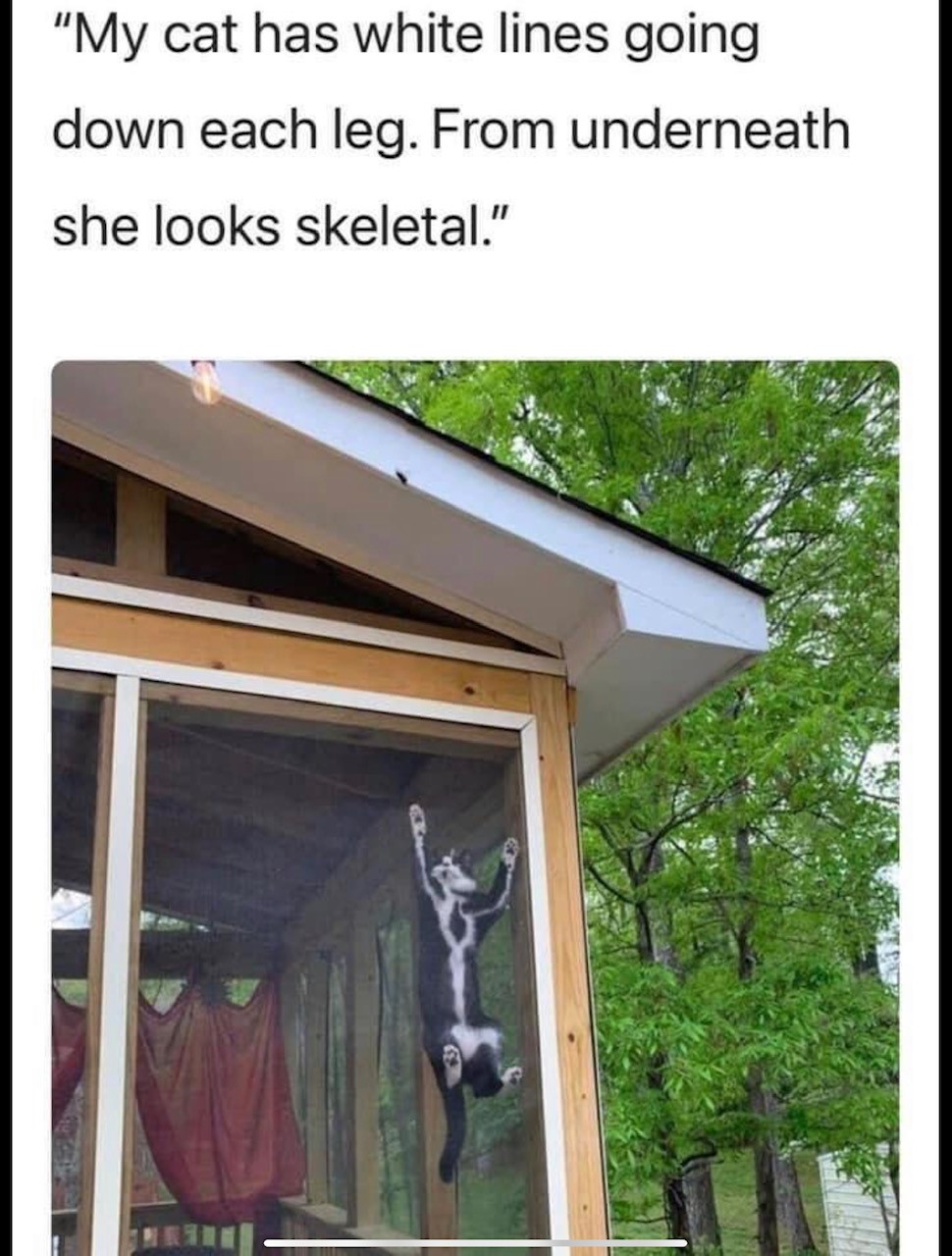