Inquiring minds want to know, and three Europeans (perhaps in cahoots with the divine) have answered:

When a reader sent me this article, and I read the online condensed version (it takes two minutes), I thought it as a joke. But no, it’s for real. You can see the journal site here, and a response to the article is the first one listed on the contents page of the latest issue. I’d love to see the response, or the full original paper (you can see a precis by clicking on the screenshot below).  I’ve archived the article’s precis here in case that for some reason they ditch the article. 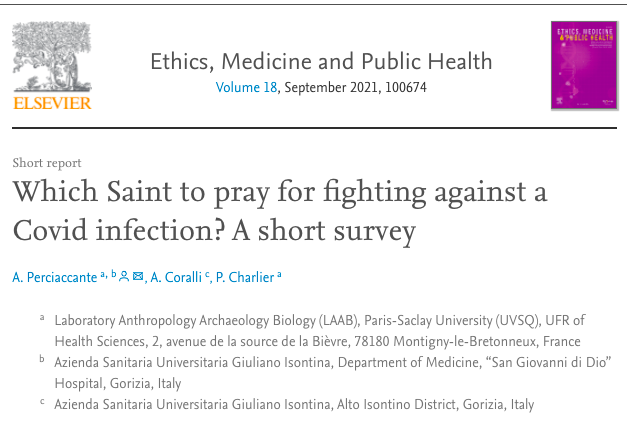 Okay, I’m going to show you the whole “snippet” of the paper as presented by the journal:

Which Saint to pray for fighting against a Covid infection? A short survey

In the absence of a treatment still considered universally effective, and of a vaccine validated by the health authorities, we wanted to know which Catholic saint the European Christian community turned to in the event of infection with Covid-19 to request a miraculous healing.

An online survey was carried out on a sample of 1158 adults using social media tools.

All results are presented in this research, with a few saints in the majority, and some dictated by the symptomatology of the Covid-19 infection or the personalities of certain « doctor guru ».

This medico-anthropological study is revealing the psychology of Western patients vis-à-vis the magic-religious means used in the fight against diseases, particularly in the epidemic/pandemic context.

The relationship between religion and medicine is well known in human communities since antiquity. Medieval medicine was based on Hippocratic and Galenic doctrines, but it was also characterized by spiritual and divine influences. So, in European countries, in Middle Ages, Saints’ invocation for the curing of diseases was an usual practice.

Despite, the spiritual and religious dimensions have deviated from medicine after the Renaissance and the Late Enlightenment, the intercession to the Saints. . .

We conducted a survey on two of the most used social networks: Twitter and Facebook. The survey was conducted between August 21 and 25, 2020. Each author posted on his Twitter and Facebook page, the following question: “Which saint you would pray for fighting against a Covid infection?”. The total number of followers targeted by the question was 15,840 people (92% from Europe).

A total of 1158 adult anonymous participants (mainly from France and Italy) answered to our question. For obvious ethical reason, no sex, age or cultural background are available. All results are summarized in Table 1.

Analyzing the results in more detail, from the survey it emerges that the majority saint is St. Rita (Fig. 1). From a young age, Rita of Cascia (Italy, 1381-1457) dreamed of consecrating herself to God, but she was destined to marry a violent man. Rita’s patience and love changed her husband’s character. After the violent death of her husband and two children from illness, Rita decided to follow the youthful desire by entering the monastery of the Order of Sant’Agostino in Cascia (Italy) [4].

This short medico-anthropological study is revealing the psychology of Western patients vis-à-vis the magic-religious means used in the fight against diseases, particularly in an epidemic/pandemic context. The survey confirms that Catholic people continue to entrust their sorrows, their anxieties and their hopes to the divinity, especially in time of global stress, mainly if it is a suddenly-presented difficulty that have changed the people’s lifestyle. Moreover, the choice of the Saints to. . .

The authors declare that they have no competing interest.

So if you don’t get vaccinated, you better start praying to Saint Rita.

Note that this isn’t just a survey of opinion, but is somewhat prescriptive: “In the absence of a treatment still considered universally effective, and of a vaccine validated by the health authorities, we wanted to know which Catholic saint the European Christian community turned to in the event of infection with Covid-19 to request a miraculous healing.”

Elsevier should be ashamed of itself. If anybody has access to the letter of response, I’d love to see it.

36 thoughts on “An academic paper: Which saint is best to pray to if you’ve got Covid?”