We all know this famous line from Martin Luther King’s “I have a dream” speech:

“I have a dream that my four little children will one day live in a nation where they will not be judged by the color of their skin but by the content of their character.”

But what sounded so glorious, so right, and so moral in 1963 isn’t going down so well today.  There are two issues.

First, is this a realizable dream given that we’re evolved and taught to see race? We’re probably also evolved to be suspicious of those who are different, but I’m confident that this can be overcome. The fact is, though, that it’s been 58 years since King limned his dream, and although there’s been substantial progress in racial equality, clearly people are still judged by the color of their skin. Those of us who grew up in the Sixties hoped, though, that even if we saw race, we could instantly ignore it, and before too long we’d have a just society—one with equal opportunity for all. We’re still far from realizing the dream. (When I say, equality, by the way, I always mean “equality of opportunity”, not, like Ibram Kendi, equality of outcome.) In other words, when you’re assessing King’s dream, ask yourself this: Would it really be good for society if we all donned magical spectacles that prevented us from knowing the race of people we encounter? (I guess we’d have to have a way to block out self-identification as well.)

More important, the activist wing of anti-racism, which I take as the view outlined by Kendi, does want people judged by the color of their skin, and then given advantages for being black. And, as far as I can see, he sees this requirement as persisting indefinitely.

In the article below, Coleman Hughes, a writer, podcaster, and fellow at the conservative Manhattan Institute for Policy Research, outlines the two opposing views of antiracism delineating them them as polar opposites. He argues that the Kingian view is far better than the Kendian view. When I started thinking about it, I thought I adhered to the Kingian side. After all, I was a child of the Sixties and demonstrated for racial equality. But in the writing of this short piece, I realized that neither view is the best way to go forward.  We have to see race, we have to take it into account, and we have to do something about it (just as we must also do something about class differences), but we don’t have to see only race, as Kendi would have it. A person is not defined by their ethnicity, or assumed to share certain traits with others of the same ethnicity, but there are still average inequities between groups. To fix them, you have to see race.

This essay is one of several that the Persuasion site is particularly proud (the list is here), and is being republished.  Click to read it. 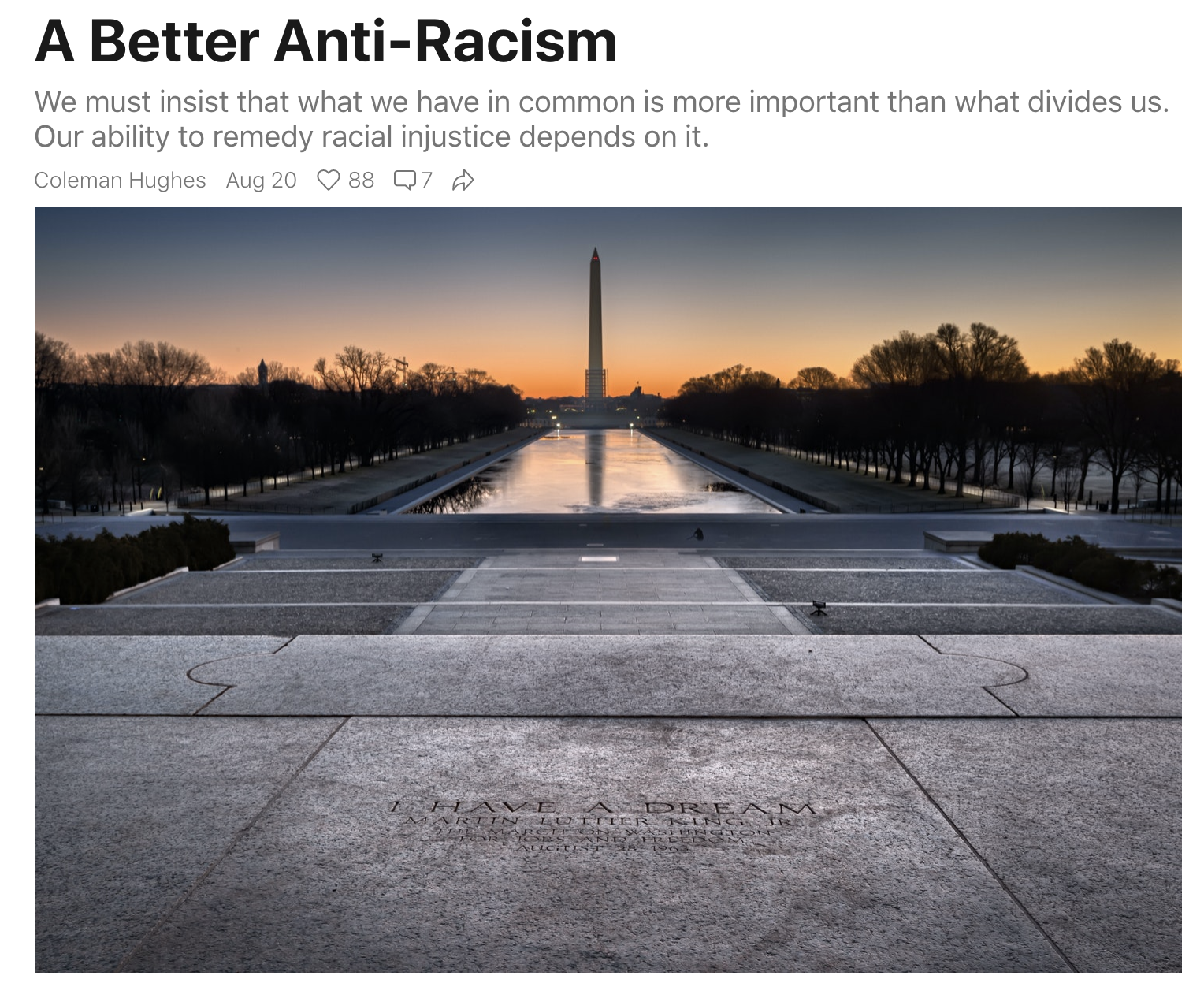 Here are the two opposing forms of anti-racism as outlined by Hughes:

For fifty years, the American left has been torn between two different answers. The first was best encapsulated by Martin Luther King Jr. in his famous “I Have a Dream” speech. King looked forward to a day when “little black boys and black girls will be able to join hands with little white boys and white girls as sisters and brothers”—a day when race would be seen as an insignificant attribute.

The competing vision—let’s call it race-consciousness—was best encapsulated by the Black Power movement. The end goal of this movement was not, as King once put it, to bring about a “new kind of togetherness between blacks and whites.” Rather, it was to demand that black people, understood as a collective, receive more recognition, more respect, and more resources. Underlying this vision was the assumption that society is a zero-sum power struggle between oppressed groups and oppressor groups—and that a win for the former requires a loss for the latter.

In the race-conscious vision, racial harmony is an afterthought. At times, it is actively shunned. Race-consciousness seeks to “problematize” relations between members of different ethnic groups in a variety of ways. In 2017, for instance, the New York Times ran an op-ed entitled “Can My Children Be Friends with White People?” written by a black father who planned on teaching his sons “to have profound doubts that friendship with white people is possible”—a near-perfect reversal of Dr. King’s message.

I’d maintain that, in the end, both groups are aiming for racial harmony, but differ in how it’s to be attained.

For Hughes, only the Kingian view can “deliver on its promises”, which turn out to be “more status and more access to opportunity” for minorities. He adds that it also gives white people guidelines about what to do instead of sitting around mired in guilt (I’m not sure, though, which way to act Hughes is thinking of), and also gives society a way to move forward with problems like “mass incarceration and police brutality.”

I don’t see that. Not only do we see color, but, more important, we shouldn’t ignore it, for solving these problems requires seeing it and doing something about it. Yes, a racist cop can’t beat up a black traffic violator if he “can’t see race”, but saying that “we shouldn’t see color” is not going to help us reduce the inequalities among groups. We’re a long way from seeing color but completely ignoring it.

And that’s where we have to incorporate a bit of the Kendian view (this is not a blanket endorsement of Kendi’s view on racial relations, most of which I disagree with). For if we ignore color, how does Hughes’ vision of providing equal opportunity come about?  I don’t see how it can unless we recognize that, on average, blacks and other minorities are disadvantaged by history, and that history continues to hold them back today. How do we give black children more exposure to STEM fields without explicitly going into black communities and trying to fix the problem? You can’t do that without the notion of “a black community.” Now certainly there are some privileged black kids from well-off families who don’t need a leg up, but starting with the idea that “I don’t see color” is not going to do squat about the big racial disparities.

Now I agree with Hughes that the way to give people equal opportunity is not, as some anti-racists suggest, to dismantle the meritocacy and lower standards so that all groups achieve Kendian “equity”: his view that groups must be represented in organizations in the same proportions they occur in the population, for if they’re not, says Kendi, this is prima facie evidence for ongoing structural racism. Of course that’s not true, as anybody in modern academia can attest, but we now have less equity than is seemly for a liberal democratic society. Whatever the solution to inequality of opportunity we adopt, it cannot involve a gross lowering of standards and expectations.  So I partly agree with this statement from Hughes, which could also have been said by John McWhorter:

Yet race-consciousness cannot deliver on its promises because its foundational assumptions are flawed. For one thing, it does not reject the old rigid racial categories so much as it transforms them, sneaking them in through the back door. If someone said that black kids should not be encouraged to work hard a hundred years ago, it was probably because they were racist. If someone says the same thing today, it’s almost certainly because they are “anti-racist.” But any political program that insists that black people be held to a lower standard will never be able to bring black achievement up to those same rejected standards—and thus will struggle mightily to address racial disparity.

The solution is not to hold minorities to lower standards, but to remedy any disparities in education, treatment, and the like, until everyone cam be held to the same high standards.

The other thing I agree with Hughes about is that we’ve made substantial progress in race relations in eighty years:

But this underplays how much progress we have already made. Back in the early 1970s, the NYPD killed 91 people in a single year. In 2018, they killed five. Since 2001, the national incarceration rate for black men ages 18-29 has been cut by more than half. Most people don’t know this. As a result, they imagine that the system must be overturned in order for progress to occur. But though there are, of course, still a lot of injustices in today’s America, they are wrong.

The current system, warts and all, has enabled huge progress for black people in recent decades. Overturning the liberal principles on which our institutions are based would not hasten progress towards racial equality; it would threaten the very stability that is required for incremental progress to occur.

But which way do we go to push that progress to King’s goal line:? I see a compromise between the Kingian and Kendian paths. We must recognize racial differences between people, for without that recognition we can’t arrive at equality of opportunity.  And then we must roll up our sleeves and do the really hard work: reallocation of funds, tutoring, and sensitive but rigorous teaching. And yes, reparations, but in the form of affirmative action, not money or housing vouchers. It will take years, and it will take sacrifice—substantial financial sacrifice by white people. Moving rocks or renaming buildings, however well intentioned these actions be, is not the way forward.

But if we do these things, will we eventually realize King’s dream? My youthful optimism is no longer so strong. Not only are people more interested in performative gestures than in substantial social reform—reform that requires sacrifice—but the diversity and equity industry is so well established in the media, in the arts, in business, and academia, that I believe they’re here for keeps. Even if, some fine day, we do arrive at an equality of opportunity that has nothing to do with pigmentation, the people in the DEI industry will be unwilling to admit that we’ve arrived, for they have to keep their jobs. And as we’ve learned, almost anything can be judged racist in an attempt to gain power, and the fear of being so judged will also contribute to impeding racial equality.

These are random thoughts, and I had no idea what I’d write when I started this. (It is, after all, a website, not a magazine piece.)

I’d recommend reading Hughes’s piece and then I’d ask you to weigh in below.

58 thoughts on “Do we really want a color-blind society?”