Well, I’ll be! There are over 40 university chaplains at Harvard and, according to this new article in the New York Times, they elected as their chief . . . an atheist! Click to read the news, which actually doesn’t surprise me: 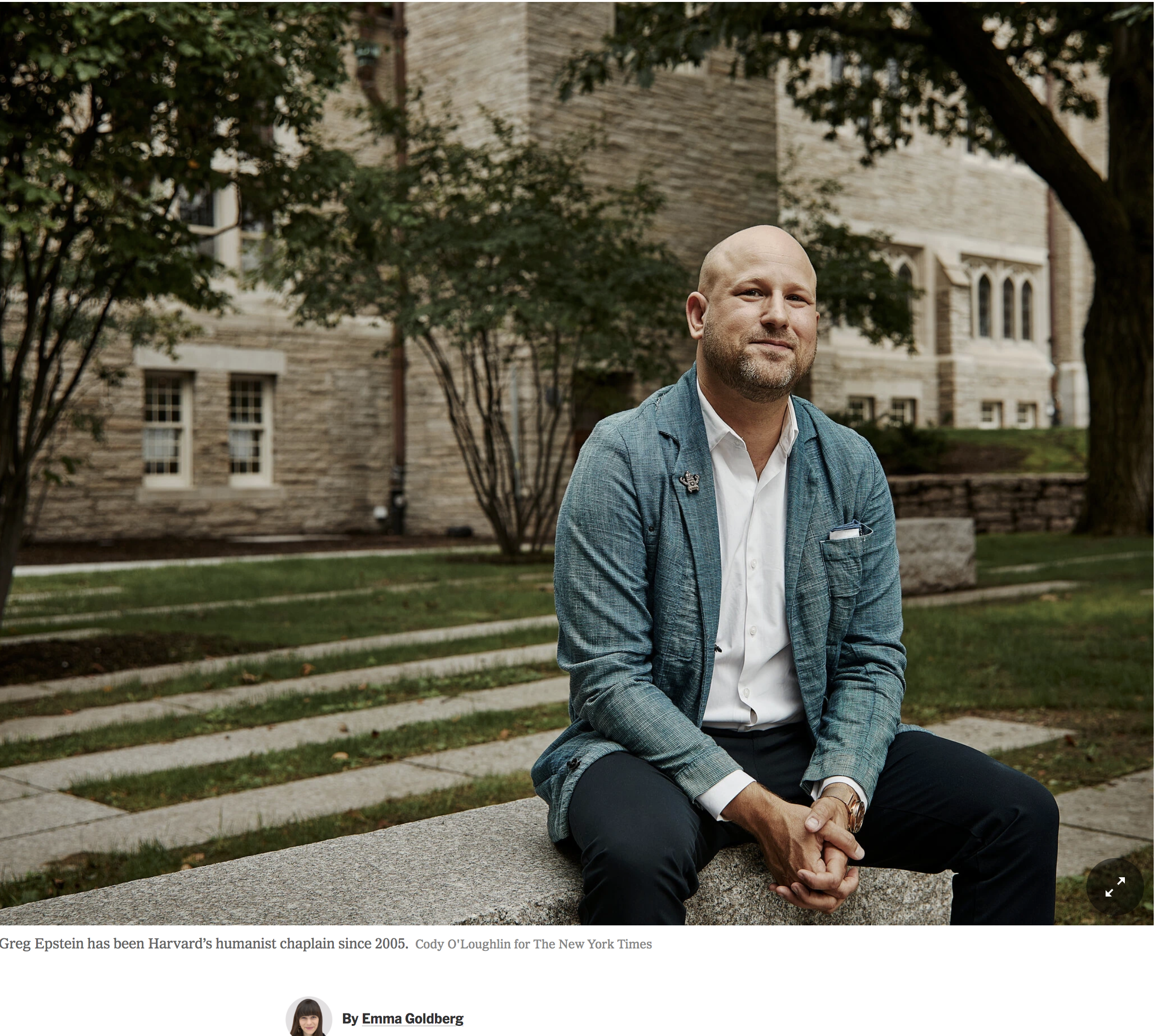 Harvard has had a humanist chaplain for a long time, but several of the earlier ones were rather unctuous accommodationists. Nevertheless, the idea that there would be a chaplain who could serve the needs of the “nones”—people who don’t have a formal religion but could either be spiritual or believe in some divinity—is heartening. It’s not as good as an atheist chaplain, mind you, but it’s better than nothing. And, in fact, the new boss, Greg Epstein, raised Jewish, is an atheist, and has written a book about humanist morality: Good Without God. Here’s the Amazon blurb, which is a little too accommodationist for me, but I’m an antitheist and there is no chance that an antitheist could be a humanist chaplain at Harvard. After all, Epstein, who has a reputation as a good guy, has to deal with the problems of atheists and theists.

A provocative and positive response to Christopher Hitchens, Sam Harris, Richard Dawkins, and other New Atheists, Good Without God makes a bold claim for what nonbelievers do share and believe. Author Greg Epstein, the Humanist chaplain at Harvard, offers a world view for nonbelievers that dispenses with the hostility and intolerance of religion prevalent in national bestsellers like God is Not Great and The God Delusion. Epstein’s Good Without God provides a constructive, challenging response to these manifestos by getting to the heart of Humanism and its positive belief in tolerance, community, morality, and good without having to rely on the guidance of a higher being.

So be it. You really don’t want a Richard Dawkins trying to give psychological or spiritual aid to someone who has a penchant for the numinous. And electing someone who could minister to nearly everybody, including nones and atheists, is a savvy move for Harvard’s chaplains, who elected Epstein unanimously. By doing this, no defined religion has privilege over the rest, with all faiths are on the same plane. The hope, probably misguided, is also that Epstein can bring different faiths together. (Remember, they’re still “faiths”!) His election is also a recognition of the rise of the nones, who now make up over 20% of Americans, surely more than the percentage of students adhering to most of the 40+ “real” religions with Harvard chaplains. Further, as the article notes, a survey of Harvard’s class of 2019 by the Harvard Crimson (the student newspaper) found that those students were twice as likely to identify as atheists or agnostics compared to their age peers in the American population as a whole. In other words, I bet about 50% of Harvard students are “nones.”

Which reminds me: the definition of “spiritual” in this article is unclear. It clearly could include God, but could also include me, since in some ways all of us could be seen as “spiritual people”. There should be a “spiritual spectrum” corresponding to Dawkins’s “God spectrum”. It would range at one end to those who are besotted with the divine, to those at the other end who are simply moved by great art and music (that would be me).

At any rate, here’s how Epstein operated at Harvard:

Mr. Epstein, 44, author of the book “Good Without God,” is a seemingly unusual choice for the role. He will coordinate the activities of more than 40 university chaplains, who lead the Christian, Jewish, Hindu, Buddhist and other religious communities on campus. Yet many Harvard students — some raised in families of faith, others never quite certain how to label their religious identities — attest to the influence that Mr. Epstein has had on their spiritual lives.

“There is a rising group of people who no longer identify with any religious tradition but still experience a real need for conversation and support around what it means to be a good human and live an ethical life,” said Mr. Epstein, who was raised in a Jewish household and has been Harvard’s humanist chaplain since 2005, teaching students about the progressive movement that centers people’s relationships with one another instead of with God.

. . .To Mr. Epstein, becoming the organization’s head, especially as it gains more recognition from the university, comes as affirmation of a yearslong effort, started by his predecessor, to teach a campus with traditional religious roots about humanism.

“We don’t look to a god for answers,” Mr. Epstein said. “We are each other’s answers.”

Mr. Epstein’s work includes hosting dinners for undergraduates where conversation goes deep: Does God exist? What is the meaning of life? He previously ran a congregation of Boston-area humanists and atheists who met in Harvard Square for weekly services that centered on secular sermons. In 2018 he closed that down to focus his time on building campus relationships, including at M.I.T., where he is also a chaplain. Mr. Epstein frequently meets individually with students who are struggling with issues both personal and theological, counseling them on managing anxiety about summer jobs, family feuds, the pressures of social media and the turbulence endemic to college life.

“Greg is irreverent and good at diffusing pressure,” Ms. Nickerson [a Harvard student who transitioned from Catholicism to humanism] said, recalling a time he joked that if her summer internship got too stressful she could always get fired — then she would have a good story to share.

Yes, there are woo-sters in Epstein’s  flock, as well as deists, but there are also atheists, humanists, and those questioning religion in general. Epstein will listen to them, but not give them answers, which they must find for themselves. And that’s the way it should be.

14 thoughts on “Harvard’s head chaplain is now an atheist”