You’d think that the last places one would start treating individuals as embodying characteristics of their “tribe” are the offices of therapists.  After all, both psychologists and psychiatrists are expected to deal with their patientS as people with unique problems, and not impute to the patient “group” characteristics based on stereotypes or political ideology. Nor should they impose their own political views on their patients, which is a real no-no for therapists. (They do, of course have ideas on how to treat patients, and make suggestions, but not of the genre, “hey, maybe you’d feel better if you wore a MAGA hat.”)

Well, the idea that therapy is ideology-free is, of course, dead wrong, especially now when there is no tent in the Universe where the Woke Camel won’t stick its nose. And so the nose goes onto the couch, as recounted in this Persuasion article by Sally Satel. Click on the screenshot to read: 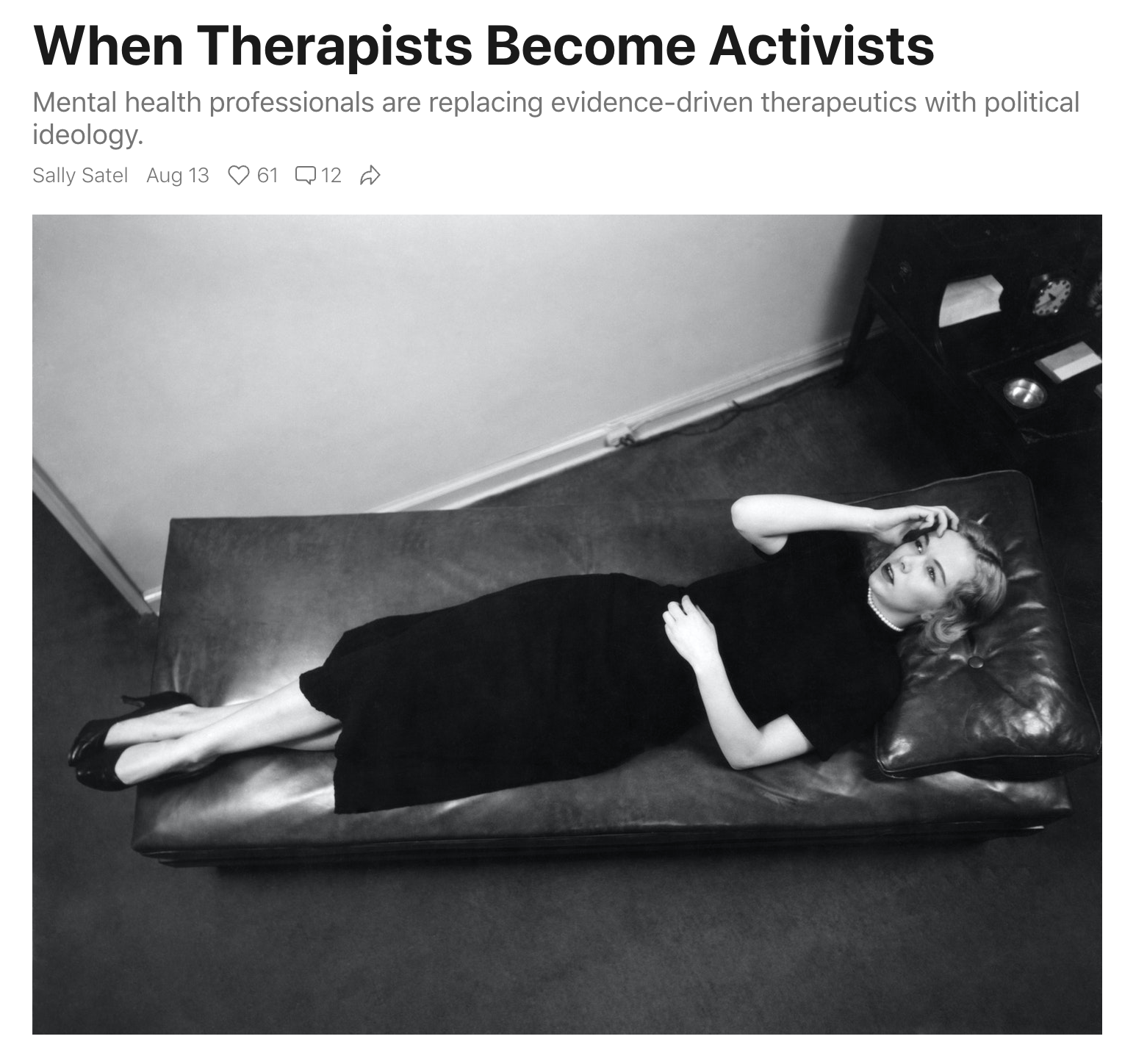 Now activist therapists aren’t new; for years we’ve had specimens who impose their own views on patients rather than sussing out a patient’s problems from their own words. These activists include “recovered memory therapists”, who, it seems, already know what memories are supposed to be recovered, and try to convince the patient about the truth of things that might never have happened.

You’ve heard of the McMartin preschool case, in which recovered memory therapists dug up instances of sexual and even Satanic abuse of children that never happened. The accused people spent several years in jail, but were eventually acquitted. Right now Jerry Sandusky is sitting in prison for sexual abuse of young boys, with a lot of the testimony that put him there “recovered” by therapists digging around in the minds of young people. (Some said they weren’t abused but, after some bouts with the therapists, suddenly remembered that Sandusky committed sexual acts on them).

These therapists are clearly activists, and one would, based on their activities and the political leanings of therapists, expect them to often be on the Left.

Sally Satel, a psychiatrist who wrote this piece, is against activism, though she is affiliated with the Right-Wing American Enterprise Institute. Wikipedia says she’s a “political conservative” and has also written several books about the incursion of Left-wing doctrine into medicine, like this one (click to go to Amazon site): 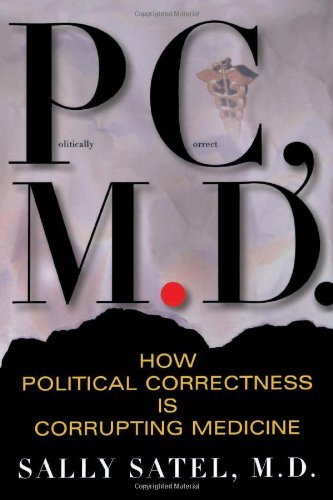 Satel’s also identified as working at a methadone clinic in Washington D.C. and as a visiting professor at Columbia University’s Vagelos College of Physicians and Surgeons. If you’re one of those, you can ignore her views simply because she’s a conservative, but you might be missing some truths. And her claimed truth in this piece, which can be at least partly checked by following the links she gives, is that therapy is increasingly turning into the instillation of woke attitudes into patients as the world because woker. I doubt that, in these times, you’ll find that thesis inherently unlikely! But here’s what she says:

Until roughly five years ago, people seeking mental health care could expect their therapists to keep politics out of the office. But as counselor education programs and professional organizations across the country embrace a radical social justice agenda, that bedrock principle of neutrality is crumbling. Mental health professionals—mainly counselors and therapists—are increasingly replacing evidence-driven therapeutics with ideologically motivated practice and activism.

The Graduate Counseling Program at the University of Vermont, for example, intends to “structurally align” itself with the Black Lives Matter movement and begin “the work of undoing systemic white supremacy.” After George Floyd’s death, the Johns Hopkins University Counseling Center advised would-be students to “consider us one of many resources in the difficult but necessary work of engaging with internalized bias, recognizing privilege, and aligning values of anti-racism and allyship with embodied and sustained practice.”

Such sentiments are not limited to mission statements—they are playing out in the real world of clinical training. Some counseling programs encourage students to engage in social justice activism. Most troubling of all, trainees are being taught to see patients not as individuals with unique needs, but as avatars of their gender, race, and ethnic groups. Accordingly, more and more counselors encourage their patients to understand their problems as a consequence of an oppressive society. White patients, for instance, are told that their distress stems from their subjugation of others, while black and minority patients are told that their problems stem from being oppressed.

The stakes for patients are high. When therapists use patients as receptacles for their worldview, patients are not led to introspection, nor are they emboldened to experiment with new attitudes, perspectives, and actions. Patients labeled by their therapists as oppressors can feel alienated and confused; those branded as oppressed learn to see themselves as feeble victims. It is difficult to imagine how a healthy therapeutic alliance between counselor and patient—a core bond nurtured through a clinician’s posture of caring neutrality and compassionate detachment—could thrive under these conditions.

Is it hard to imagine that therapists might engage in this form of indoctrination when secondary-school and college teacher do it all the time? Satel goes on:

The American Counseling Association, “the world’s largest association exclusively representing professional counselors,” has a Code of Ethics that explicitly cautions against such boundary violations: “Counselors are [to be] aware of—and avoid imposing—their own values, attitudes, beliefs, and behaviors.” Yet the association has said nothing about the overt ideological stance of some programs, or blatant instances of imposition.

It’s hard to argue with that paragraph’s advice. Nor is it hard to believe that any form of propagandizing patients will be aimed at moving them toward the left because, at least according to Five Thirty Eight, social and personality psychologists are about as liberal as college professors:

When New York University psychologist Jonathan Haidt asked about a thousand attendees at the annual meeting of the Society for Personality and Social Psychology in 2011 to identify their political views with a show of hands, only three hands went up for “conservative or on the right.” Separately, a survey of more than 500 social and personality psychologists published in 2012 found that only 6 percent identified as conservative overall, though there was more diversity on economic and foreign policy issues.1 The survey also found that 37.5 percent of respondents expressed a willingness to discriminate against conservative colleagues when making hiring decisions. Psychologists, it appears, tend to fall on the liberal end of the political spectrum.

I expect therapists will line up pretty much the same way.

Now it’s okay if a patient’s problems involve politics. Perhaps he was driven to fury by Trump, and it’s upsetting his life. Or he can’t live in a world in which race seems to be the main driver of everything. Then the therapist can draw out the patients and suggest ways to improve their lives. But I don’t think it’s ever valid to impose your own politics on a patient, nor to treat them as a member of a political or ethnic group rather than an individual, like trying to urge them to be “more black or Hispanic” or “less white”.  Satel has a couple of anecdotes about this, but remember, they are anecdotes.

Central to the ideology that’s creeping into the field of mental health care is a growing aversion to recognizing personal responsibility and agency. One colleague of mine who works in a prominent psychiatry department told me that during a group discussion of the growing problem of stress and suicide in black youth, her colleagues were unwilling to discuss explanations that pointed to factors coming from within beleaguered communities. Thus, participants who pointed to fear of police aggression and societal discrimination were greeted with nods, but when she suggested they also consider bullying by classmates, chaos in the home, or neighborhood violence, she was ignored.

I have had my own encounter with this growing illiberal strain. Following a lecture I gave earlier this year to a group of psychiatrists and trainees, I was castigated by several attendees for drawing attention to personal agency in overcoming drug addiction. My transgression, as they saw it, was to “blame the victim” and take focus away from factors such as racism, poor education, and poverty—which, as I had noted in my presentation, also predispose people to heavy drug use. But I was not “blaming the victim,” I explained in an icy Q-and-A; rather, I was drawing attention to the patients’ capacities to improve their lives and, therefore, to hope.

As a palliative, she touts an organization, The International Association of Psychology and Counseling, dedicated to promoting “critical thinking over indoctrination” and to an organization called FAIR in Medicine, a group designed to combat the incursion of ideology into medicine as a whole.  As Satel says at the end (her emphasis):

Though I am worried for my profession, for colleagues who feel pressure to conform, and for the patients who depend on them, I take heart from these flares of resistance. I am confident that there is a silenced majority of clinicians who see the need to resist the ideological encroachment into the field of mental health care and the health sector more broadly. These new organizations are in their early stages but have the potential to attract the critical mass needed to rebuff politicized narratives and re-assert the primacy of individual patients in all their complexity.