Conor Friedersdorf, a staff writer at The Atlantic, seems to specialize in stories that either contradict the woke narrative or promote civil liberties—not exactly the fare you’d expect from a liberal magazine.  You wouldn’t, for example, see the article discussed here in either The New Yorker, New York Magazine, or The New York Times. But I like Friedersdorf because he writes well and, I suppose, because I generally agree with him.

The topic of his most recent column is the “Defund the police” slogan, which has proved to be disastrous for the Left—so much so that they’re starting to pretend that it’s really a Republic mantra. And about that mantra, Steely Dan said, in another context, “Only a fool would say that.” There’s evidence that enlarging police forces reduces crime, and that enlarging the police saves twice as many black lives as white lives. That’s because a disproportionately high percentage of murder victims (nearly half) are black, despite African-Americans making up only 13% of the country’s population. In view of this, and of Americans’ general repugnance to “defund the police” calls, Friedersdorf suggests another slogan.

We’ve already learned two things from the “Defund the police” campaign. First, when you press its adherents, you see that many aren’t actually calling for drastically cutting police budgets. Well, they may say they are, but when they realize the stupidity of their claim that getting rid of cops will solve the problem of crime, they quickly bring up stuff like drawing social workers and negotiators into working with the police. I have no objection to that, but there are still too many people who really want the police gone. They are morons. 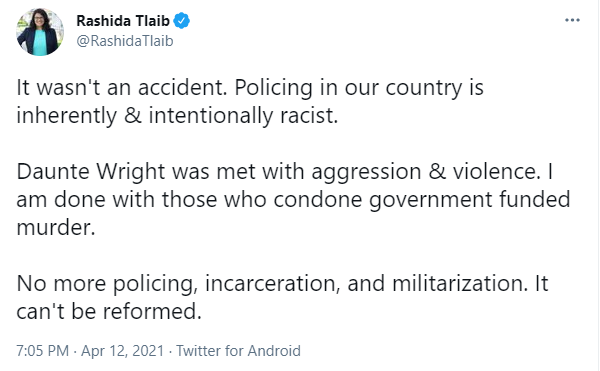 Second, the people most opposed to “Defund the police” campaigns are those who are inordinately often the victims of crime: minorities. That slogan may have given Trump a boost (thank god not a big enough one) in the last election, and cost Democrats seats in Congress. As Friedersdorf notes:

The utter unpopularity of defunding the police has since become even clearer. By 2021, some of the cities that made the most significant gestures toward cuts to police budgets were reversing themselves. In March, a USA Today poll found that nationwide, “Only 18 percent of respondents supported the movement known as ‘defund the police,’ and 58 percent said they opposed it,” adding that “only 28% of Black Americans and 34% of Democrats were in favor of it.” The victor in New York City’s Democratic mayoral primary in June was Eric Adams, a former police officer who ran against “defund the police.” In July, another USA Today poll surveyed residents of Detroit as that city suffered a rapid increase in murders. “By an overwhelming 9–1, they would feel safer with more cops on the street, not fewer,” the newspaper reported. “Though one-third complain that Detroit police use force when it isn’t necessary—and Black men report high rates of racial profiling—those surveyed reject by 3–1 the slogan of some progressives to ‘defund the police.’”

So progressive Democrats should find themselves another slogan. Friedersdorf suggests “solve all murders”, mainly because there’s a huge and disturbing disparity in the proportion of murders solved depending on the race of the victim:

The Murder Accountability Project, a nonprofit watchdog group that tracks unsolved murders, found in 2019 that “declining homicide clearance rates for African-American victims accounted for all of the nation’s alarming decline in law enforcement’s ability to clear murders through the arrest of criminal offenders.” In Chicago, the public-radio station WBEZ’s analysis of 19 months of murder-investigation records showed that “when the victim was white, 47% of the cases were solved … For Hispanics, the rate was about 33%. When the victim was African American, it was less than 22%.” Another study in Indianapolis found the same kind of disparities.

Eliminating such disparities ought to be a priority for all Americans, including anti-racist activists. But that’s unlikely so long as Black Lives Matter leaders and their allies focus on defunding the police.

True enough. But why do these disparities exist? A true antiracist would automatically say that police put less effort into solving homicides when minorities are the victims—it’s structural racism. And that may be the case, but of course there are other explanations. In the case of gang-related murders, for instance, people might not want to reveal information about murders lest they themselves become victims. Or blacks and Hispanics might be less forthcoming simply because they don’t trust the police. Regardless, this disparity needs to be addressed and eliminated. The question is—and it’s one Friedersdorf doesn’t even ask—whether increasing police forces will eliminate those disparities, even if they solve more murders. We don’t know the answer to that, either. But surely having more police will lead to solving more murders, and it’s reasonable to assume that since half the homicide victims are black, the disparity, if not due to racist police and detectives, will at least diminish.

Despite the unpopularity of “defund the police” slogan (which goes hand in hands with the odious acronym “ACAB”—”all cops are bastards”), the progressive Left still seems to push it as a “dump the cops” demand. Here’s a bit on that:

. . . many activists are still doubling down on “defund,” whether in municipal budget disputes or interviews with national publications. Legislators on the Democratic Party’s left flank continue to press the idea at the local, state, and federal levels. The merits of defunding are still taken as self-evident in academic writing, tweets by prominent organizers, and professional PR campaigns.

On July 20, I received an email from Ronja Kleinholz, an account executive at Berlin Rosen, a large PR agency that, according to its website, has offices in New York, Los Angeles, and Washington, and represents clients including MGM Resorts, the Ford Foundation, Unicef, Singapore Airlines, and Virgin Hyperloop 1. “With continued talks around addressing rising crime rates and increases in gun violence, activists with the Movement for Black Lives are available to talk about why we must refocus the conversation around defunding the police,” she wrote. “While Republicans focus on fearmongering and blaming disinvestment in policing for rising crime rates, statistics show that police don’t prevent nor stop crime—in fact, they often show up after the crime has already occurred.”

That last sentence, if it wasn’t so odious and plain wrong, would be hilarious. Police don’t prevent or stop crime? Has Kleinholz hear what happened during the Montreal Police Strike on October 7, 1969? It lasted only eighteen hours, but here, according to Wikipedia, was the outcome.

“Fires, explosions, assaults and a full-pitched gun-battle kept Montrealers huddled indoors as the reign of terror brought the city to the edge of chaos and resulted in the call for the Army help… Hundreds of looters swept through downtown Montreal last night as the city suffered one of the worst outbreaks of lawlessness in its history. Hotels, banks, stores and restaurants around the Ste-Catherine-Peel Street axis had their windows smashed by rock-tossing youths. Thousands of spectators looked on as looters casually picked goods out of store-front windows.

Sound familiar? Yes, there are morons afoot, one named Kleinholz. As for cops often showing up after the crime has occurred, that just makes me laugh. Of course they do—they have to!

So while I certainly don’t favor slashing police budgets, I’m not quite so sure whether enlarging them will “solve all murders”, or eliminate the disturbing disparities in convictions highlighted by Friedersdorf. But he does make another suggestion I’m on board with. He got the idea from Jill Leovy’s highly praised book Ghettoside, based on her crime reporting for the Los Angeles Times. And here’s the insight:

Ghettoside’s great insight is that a community can be over-policed and under-policed at the same time––and that reformers can advocate for an end to over-policing while also championing the proposition that more police resources are required to solve more violent crimes. Defund the war on drugs. Defund stop-and-frisk. But also, fund the homicide bureau and the processing of rape kits and the community-policing initiatives that help people of all classes to feel as safe in their neighborhoods as wealthy Americans do in theirs.

The absence of policing yields not a safe space where marginalized people thrive, but a nasty, brutish place where violent actors either push people around with impunity or are met with violence by someone who forces them to stop. “When people are stripped of legal protection and placed in desperate straits, they are more, not less, likely to turn on each other,” Leovy wrote. “Lawless settings are terrifying; if people can do whatever they want to each other, there are always enough bullies to make it ugly.”

Even with the help of the best PR firms, “defund the police” has little future as a successful slogan or governing program. And I remain a proponent of many other criminal-justice-reform initiatives, like 8 Can’t Wait, with their data-informed emphasis on best practices for local police departments. But at a moment when fear of violent crime is understandably increasing, especially in cities, it might be that the most urgent argument reform advocates can now make is also a political winner: Stop over-policing, but stop under-policing, too. Stop frisking people for furtive movements or arresting people for having a joint, but start funding homicide bureaus adequately and allocating police resources to prioritize the need to solve every murder. Close racial disparities in clearance rates. Black lives matter, so “Solve All Murders.”

I agree 100%, but what he’s recommending here is not exactly “solve all murders”, but “divert police resources from victimless crimes to homicides”. We’ll never solve all murders, but that would solve more of them. The question remains, though—will racial disparities disappear when more murders are solved?

24 thoughts on “Conor Friedersdorf: “Solve all murders” should replace “Defund the police””