The first is the controversial topic of genetically engineering of either human eggs/embryos, or of humans already born but with genetic diseases that might be ameliorated by genetically engineering only soe cells or tissus in the boy. Only editing at a very early developmental stage creates permanent and heritable genetic change (change able to be passed on to the next generation) in the “human germline”. “Somatic editing” of cells or tissues in a person isn’t able to be passed on.  It turns out, as Matthew notes, that the cases in which one would even want to edit the germline are very few. What is more efficacious is somatic editing: changing the DNA of cells in the body that create the symptoms of genetic disease. This is has already been done, with some success, for sickle-cell anemia, cancer, blindness, and neurological diseases. Those changes aren’t passed on, but one can test embryos for the presence of some of these conditions and practice selective implantation of healthy embryos without having to edit the DNA of the embryo.

The second issue Matthew and his interviewees discuss is “gene drive“, which involves altering DNA in such a way that a specific gene can be preferentially passed on within a species. This can accomplish things like completely eliminating a pest species (listen to the program to see how), rendering a pest susceptible to a relatively harmless toxin, or making pest species unable to be pathogenic, like engineering mosquitoes unable to carry malaria parasites. The problem with this is the uncertainty about how it will affect the ecosystem, not only causing unpredictable effects (every species has predators and prey, for instance), but also spreading, though hybridization or horizontal gene transfer, a driving gene into other organisms.

Anyway, have a listen below. 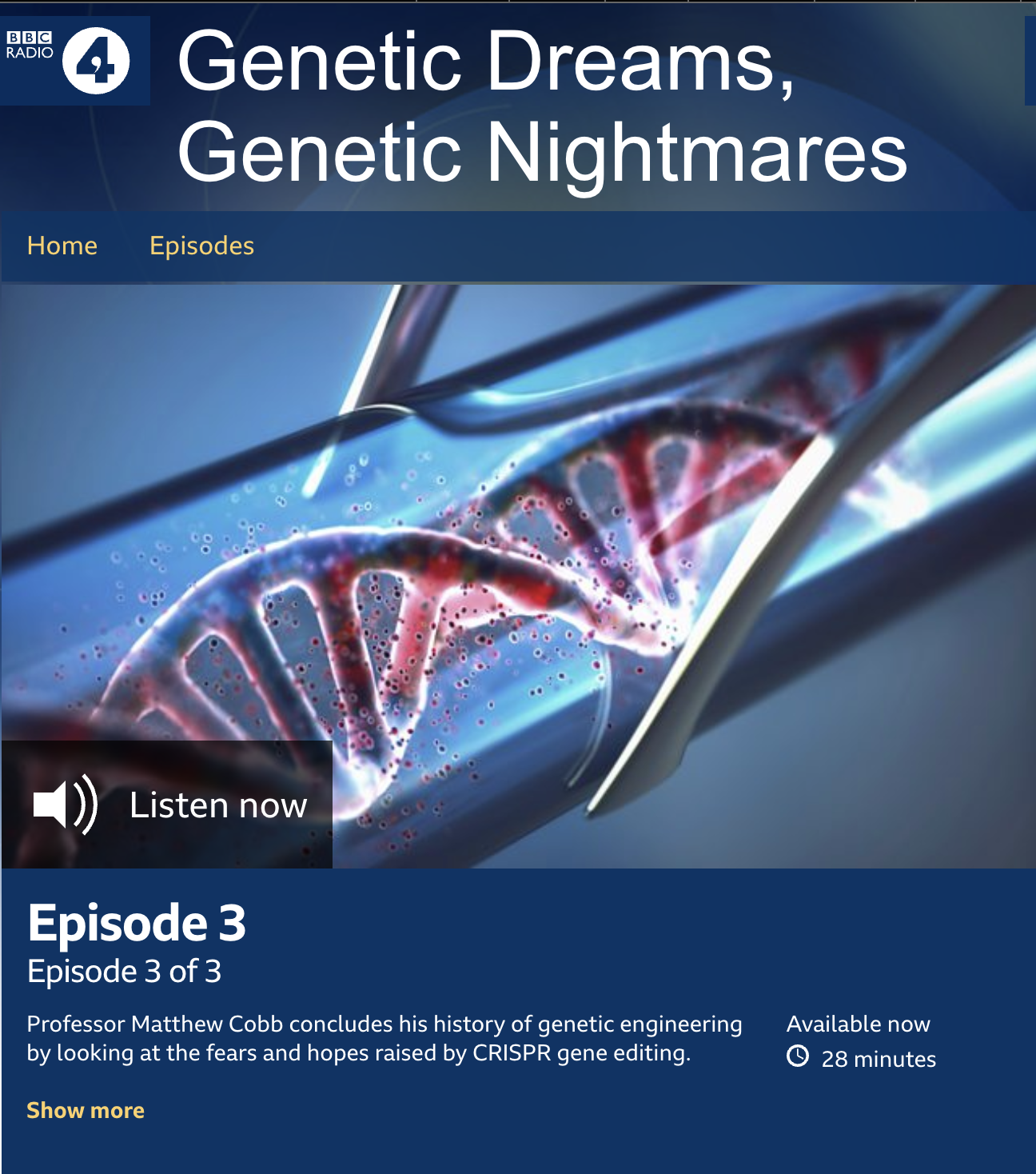 And, like the last episode, you can win a prize by answering Matthew’s question below. The prize, I believe, is an autographed as his upcoming book about the show’s topic. Here’s Matthew’s tweet, which also links to all three of his episodes.

In 30 mins live on @BBCRadio4 you can hear the final episode of my series GENETIC DREAMS, GENETIC NIGHTMARES. A prize for anyone who can work out why I chose the intro music. In a couple of hours you’ll be able to listen again here, with the other eps: https://t.co/W2JwRfvS7V