I was alerted to the appearance of Matthew’s BBC radio second show on genetic engineering from his tweet below. He’s offering a prize, too, if you understand the final music (put your guesses below or tweet them back at Matthew). I’m told the prize will be an autographed copy of Genetic Dreams, Matthew’s book that inspired this show: The book will appear next year.

Ep 2 of GENETIC DREAMS, GENETIC NIGHTMARES, on commercialisation, Genentech, GM crops etc with Boyer, Swanson, Van Montagu, Chilton, Fraley, etc. Why did we choose the outro music we did? (May be more obvious next week, when it is the intro). https://t.co/QaEDl6F2JU

Click below and then on “listen now” to hear the program. The BBC summary:

Professor Matthew Cobb looks at how genetic engineering became big business – from the first biotech company that produced human insulin in modified bacteria in the late 1970s to the companies like Monsanto which developed and then commercialised the first GM crops in the 1990s. Were the hopes and fears about these products of genetic engineering realised?

The show is based on lots of interviews—conducted by Matthew himself. It’s a good episode, beginning with the creation of venture-capital-funded genetic engineering firms, firms that made scientists wealthy beyond their wildest dreams, and eventually used recombinant DNA technology to manufacture “artificial” human insulin and growth hormone, as well as over 400 other drugs. But there was a downside of genetic engineering: interviewees complain about the secrecy it imposes on scientific research and about the fact that the technology made medicines more expensive.

The last part of the show concentrates on GM (“genetically modified”) organisms—specifically crops. We all know about Monsanto’s creation of crops resistant to the herbicide Roundup, giving companies a convenient way to sell both crop and herbicide, as well as making it easier for farmers to tend their fields.  Despite these scientific advances, though, Matthew notes that GM crops haven’t led to more food being produced, all the while increasing the use of herbicides and pesticides that may have dire effects on the ecosystem. At the end, Matthew reaches a conclusion about whether GM technology has been more of a dream or a nightmare. 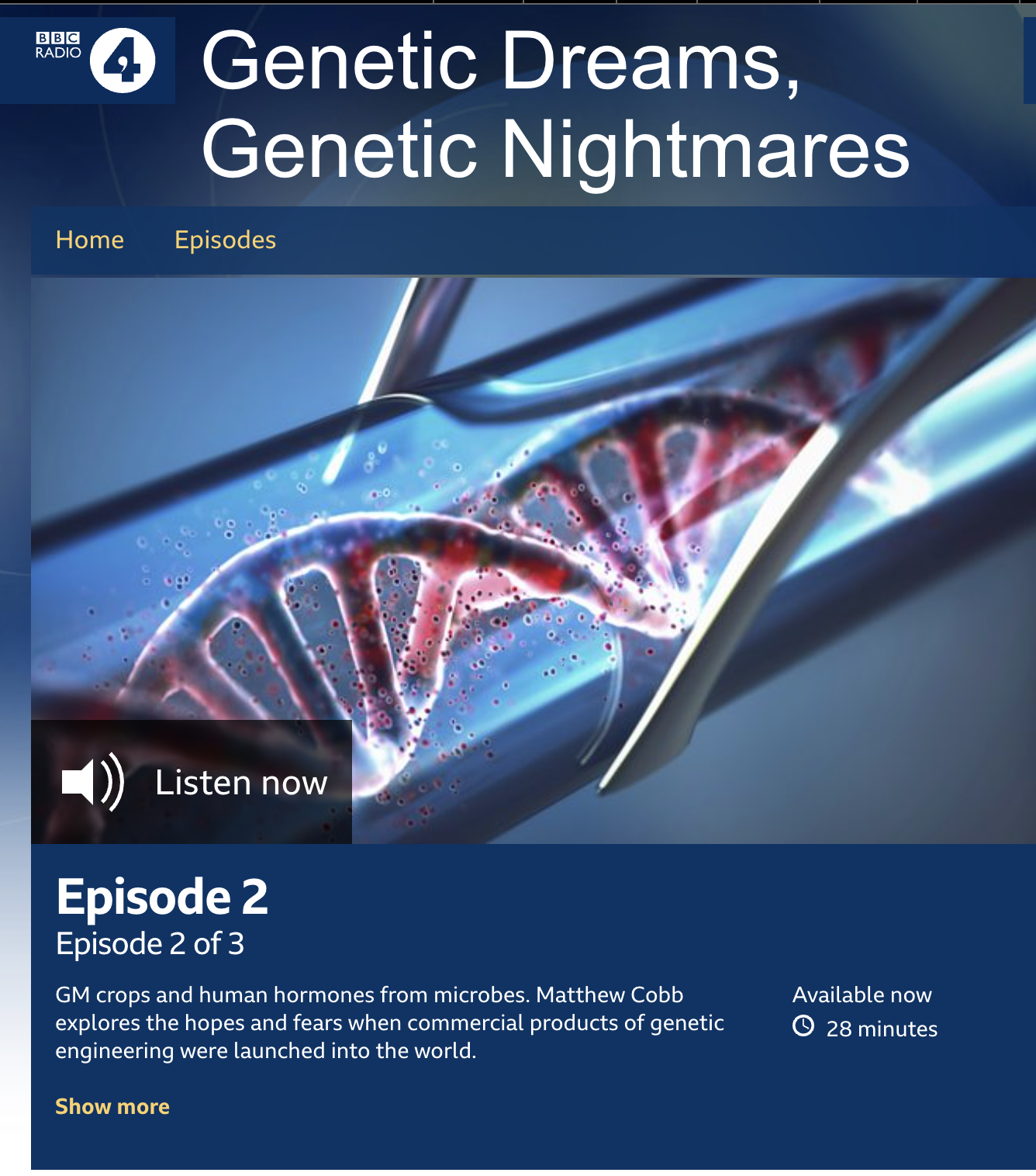